Getting a compact 1911 to run reliably can be a combination of science and black magic, but Rock Island Armory has done just that with the new Baby Rock.

Do you like the 1911, but the weight of Old Slabsides is a bit much for daily carry? Want a smooth-shooting single-action pistol but the .45 ACP generates too much kick for your taste? Rock Island Armory has introduced a gun it would like you to try out.

The Baby Rock is a shrunken 1911-style pistol chambered for the soft-shooting .380 ACP cartridge. With the handling of the traditional Browning design, the compact pistol offers a smaller package and less recoil than its venerable predecessor.

I first saw this gun at a trade show. At a media event, Rock Island Armory had the Baby Rock pistol on hand for members of the media to shoot. I recall thinking that the gun had a good feel to it, and I looked forward to getting one for review. Once the guns started shipping, the company was kind enough to send a loaner gun from the production line for testing and evaluation.

The Baby Rock certainly shares a great deal of style and functionality with its bigger brother, even if purists balk at the sight of an external extractor. It is a single-action pistol that feeds from a single-stack magazine, which helps keep girth to a minimum. The Baby Rock has a manual thumb safety on the left side of the frame. The grip safety has enough of a tail on it to prevent “slide bite” on even large, meaty hands.

The gun has deep, squared serrations on the front and rear of the slide. Like 50-series tires, these grooves ensure you’re getting a good grip on the slide when manipulating it, yet they are not sharp and are not likely to damage or catch on any clothing when carried.

Unlike many of the tiny .380 pistols on the market, the Baby Rock has a reassuring heft to it. While too heavy and large, in my opinion, for pocket carry, the pistol is an excellent size for inside-the-waistband (IWB) carry. The thinness of the frame helps the gun to disappear under a cover garment. Weighing less than 24 ounces, the gun is lighter than most other 1911-style pistols, yet not much heavier than many similarly sized polymer pistols.

Soft rubber grip panels are used on this pistol. The grips do a good job of filling the hand. Between the natural size of the pistol’s body and the grip panels, the trigger reach was relatively short. Perhaps the reach was not ideal for my hand, however I immensely prefer a shorter trigger reach like that on the Baby Rock to one that only allows the tip of my finger to reach the trigger face.

The trigger has a short amount of take-up followed by a short pull. There is a slight amount of overtravel that is not distracting in the least. An average of 10 pulls on the gauge showed the trigger pull was right at 5.25 pounds. Rock Island Armory ships the Baby Rock pistol in a hard plastic case and includes two 7-round magazines.

For me, reliability in a self-defense handgun is an absolute must. In the past, I’ve found that compact 1911-style pistols are not always dependable. So, when the Baby Rock came to me, I intended on testing it quite a bit on the range to see if this new gun could be trusted for everyday carry.

I took 10 different loads with the Baby Rock to the range. The ammunition included multiple brands of self-defense loads. I was pleased to see the pistol was completely reliable with all of the ammunition, including a variety of hollow points. Feeding, firing, extracting and ejecting were all accomplished without a single hiccup. Even as the gun got dirty, it continued to run without any problems.

When shooting on paper, the sights proved to be more than adequate for accurate shooting. The relatively thin front sight allowed for plenty of light in the rear notch for easy alignment. Unsupported five-shot groups at 25 yards were all inside the center-mass area of a man-sized target. Most were 4 inches and under in size.

The Winchester PDX1 Defender ammunition proved to be extremely accurate out of this pistol. It consistently grouped better than the other loads I ran, with the best being just over 2 inches. After shooting this line of ammunition in other guns, I’ve found it is accurate as well in all guns and calibers.

Unfortunately, I discovered that the front sight was easy to lose on a dark target when on an indoor range. Since many self-defense shootings happen in low-light situations, this is a significant concern for me. Although I’m OK with the rear sight blacked out, I strongly feel the front sight should be large and of a bright color for easy use under stress. I would much rather see the front sight replaced with something like the Truglo TFX or AmeriGlo CAP sight. The old-school trick of layering on a few coats of white fingernail polish could make a large improvement as well.

Recoil from small guns, even from a .380 ACP, can sometimes be a bit harsh. The Baby Rock was an interesting gun from the recoil perspective. While the muzzle flip seemed substantially less than many of the compact pistols I have shot, the impact in the hand seemed sharper than I expected. I don’t have a clear understanding of why, but the felt recoil into the web of the shooting hand was definitely less pleasant than from other compact .380 ACP pistols I have tested recently.

As I mentioned above, muzzle rise during recoil was less than with many other .380 ACP pistols. This comes partially from the weight of the pistol. However, since the grip is long enough to get a full hand on, control of the gun during recoil is significantly increased when compared to many other compact pistols on the market.

Grip safeties on small guns can be problematic if there isn’t reliable disengagement when the pistol is grasped. Throughout my shooting, the Baby Rock showed no problems with the grip safety, so I intentionally tried to make it fail using odd and semi-loose grips. Rock Island Armory appears to have done the proper engineering on the system, as I could not hold the gun in my shooting hand and make it fail. Conversely, the safety engaged 100 percent when it was not depressed. 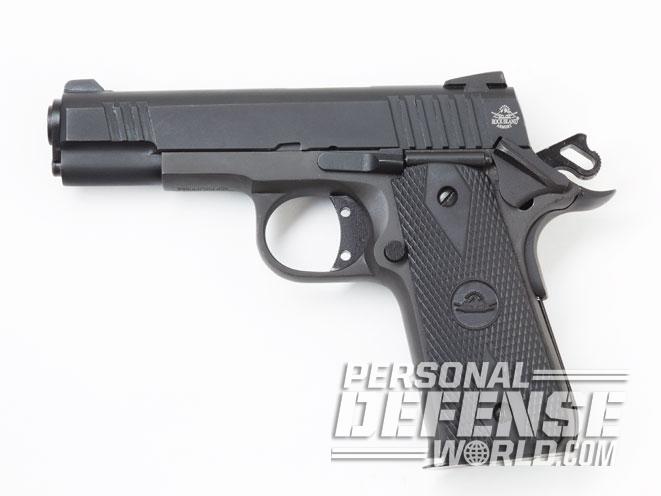 The 1911-style pistol has been a solid performer throughout the past 100-plus years. Many people have successfully defended themselves and others with these handguns. While other companies have experienced problems when shrinking the 1911 to a more compact size, Rock Island Armory seems to have figured out how to reliably do it.

Rock Island Armory seems to have a winner on its hands with this gun. It shoots very accurately for a small gun with plain sights, and it proved itself to be very reliable with all kinds of self-defense ammunition. When you add a suggested retail price of only $460 to the mix, I would not be surprised to hear that Rock Island Armory is selling these as quickly as snow cones in the desert. If you are a fan of the platform but would like to have something more compact for concealed carry, the Baby Rock is worth taking a look at.