UZIYAH! Umarex’s Uzi BB Carbine looks realistic and is really fun to use for plinking at the range.

The Uzi pistol is one of those rare firearms that has an unforgettable look, and since it has been around for more than 50 years, almost everyone has seen an Uzi, at least in films and television dramas. It has been used by Navy SEALs, federal agents and by good guys and bad guys alike, both on film and in the real world. But there are two truly significant images, one fictional and the other all too real, that etched the Uzi pistol into the American consciousness.

The first was the original 1986 movie Delta Force starring Lee Marvin and Chuck Norris. The second was the afternoon of March 30, 1981, when John Hinckley, Jr. attempted to assassinate President Ronald Reagan as he left the Hilton Hotel in Washington, D.C., following a speech to AFL-CIO leaders. In the ensuing mayhem after the first shots were fired by Hinkley, Secret Service Agent Robert Wanko was seen on news footage drawing an Uzi from beneath his jacket as agents scrambled to protect the president. That image of Agent Wanko, and the 9mm subgun he carried, has forever linked the Secret Service with the Uzi. But the gun’s legendary fame goes back to the early 1950s and its use by Israeli soldiers following the establishment of the Israeli state in 1948. 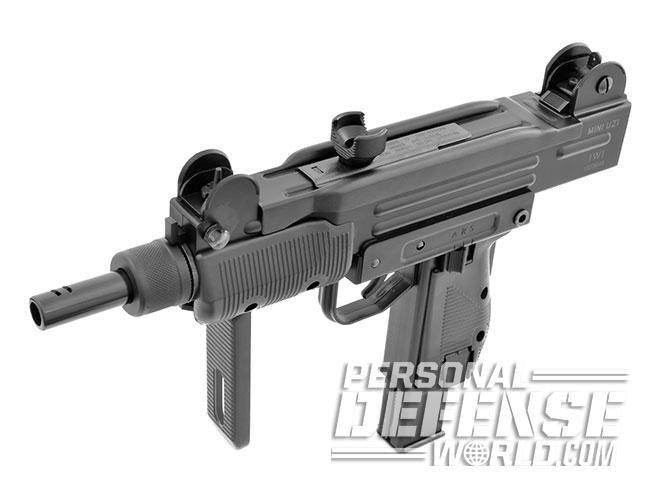 The Uzi is actually named after its inventor, Uziel Gal, a captain (later a major) with the Israel Defense Forces. Gal based his design on the Czechoslovakian Model ZK 476 and Czech Model M23/25 submachine guns, but designed his version so it could be more efficiently manufactured for quick deployment to the Israeli military. The final version was patented under Uzi Gal in 1952, with production rights assigned to the Israeli Ministry of Defense. Two years later, the Uzi was adopted by the Israeli military and the rest, as they say, is history.

The original Uzi SMG and its variants, the Uzi carbine, Mini Uzi, Micro Uzi and semi-auto Uzi pistol, have remained a staple of military and law enforcement agencies the world over for more than half a century, in calibers ranging from the original 9mm to .41 AE, .40 S&W, .45 ACP and .22 LR (rimfire conversion kits were first offered in 1987). The Uzi remained the Israeli military’s primary SMG for almost 50 years, finally being phased out by the IDF in 2003. 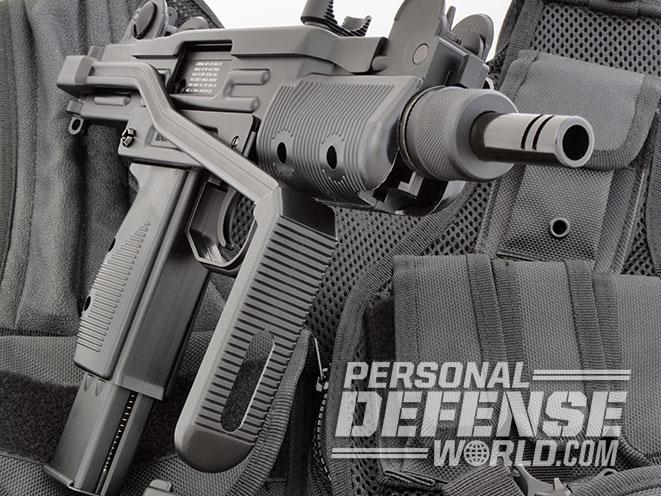 The Mini Uzi is finally available in a never-before-seen caliber: .177. The new C02-powered, semi-auto and select-fire models are absolutely true to the Uzi design in virtually every detail and operating feature.

Although Uzi construction is simple by design, right down to this latest C02 model, Uziel Gal put a lot of forethought into the gun’s original engineering. Intended to lower manufacturing costs and make them easier to build, the Uzi receiver is stamped out of flat steel and then formed around dies. The series of long ridges stamped into the sides of the receiver are not just for looks, but actually serve to strengthen the receiver’s flats against impact and damage.

Unlike conventional rifles or submachine guns, the Uzi’s magazine inserts through the pistol grip, just like a semi-auto handgun, creating a better center of balance for one-handed operation and making the Uzi easier to reload. Gal noted that the idea of placing the magazine into the grip occurred to him after he had seen soldiers in the field fumbling in low-light or dark of night to insert a magazine into the receiver of a rifle. He believed that placing it into the pistol grip, which was already in one’s hand, would make it much easier. He was certainly right.

Another distinctive feature is the Uzi’s folding stock, regarded by many military arms historians as the best design ever. Combined with the gun’s central pistol grip and magazine well, the Uzi can be made as compact as possible for carry and ease of use when fired off-hand or from the waist, yet, by simply pulling the folded shoulder rest into position, the gun can be rapidly converted into a shoulder-fired weapon. Of course, this is not legal on civilian Uzi pistol models in the U.S., thus the .177 model is the only U.S.-legal Mini Uzi pistol available with a folding shoulder stock.

The 9mm Uzi uses a blowback mechanism with a bolt that wraps around the back of the barrel, a design (although not unique to the Uzi) that contributes to reducing the overall length of the weapon. The Uzi rimfire pistols and carbines, manufactured by Walther, use a closed-bolt, blowback-operated semi-auto action, and employ the same operating controls and pistol-grip safety as the 9mm. These same design fundamentals are used in building the all-metal air pistol version as well, even the grip safety. In order for the air pistol to discharge, the grip safety must be fully compressed, just like the cartridge-firing models. Gal added this feature to the original design as a preventative measure against accidental discharge if a weapon was inadvertently dropped.

The Umarex .177 Uzi BB Carbine is as close in measurements and operation as possible to an original 1980s version. The correct-style charging handle is mounted on top of the receiver and reciprocates with each shot, and the ejection port on the right side of the receiver opens as if an empty shell case were being extracted. The Uzi BB Carbine air pistol has the same look and feel as the 9mm model thanks to an all-metal receiver, a rear sight with two flip-up apertures, original-style plastic pistol grips and forend, and even the “MINI UZI” and “IWI” imprints on the back of the receiver.

The Full-Auto version, available exclusively from Pyramyd Air, perfectly duplicates the 9mm design with a “Safe,” semi-auto “R,” and automatic “A” fire selector switch at the top of the grips. The magazine release at the bottom center of the grip is also a carbon copy of the cartridge-firing version. For even greater authenticity, steel magazines hold both the C02 capsule and 25 BBs so reloading is authentic right down to the smallest detail. (Extra mags are available from Pyramyd Air for $40.)

With a weight (including magazine) of 4.85 pounds, the gun has a 5.6-inch barrel and an overall length ranging from 13.4 to 23.5 inches, depending on whether the shoulder stock is open or folded. It just doesn’t get any closer to the real thing than this. It’s safe to say you can expect to see a lot of these Uzi air pistols subbing for the real thing in films and television shows—not that you’ll know it!

At a combat distance of 7 yards, the Uzi BB Carbine put twenty .177 Hornady Black Diamond steel BBs into an area measuring 0.75 inches. The gun has enough weight and balance in the hand that in full-auto mode it feels like the real thing with the reciprocating bolt. It takes one C02 capsule for each load of 25 steel BBs if you want to fire on full auto, or about two loads on semi-auto.

That C02 has a big job to do in operating the action. With a few magazines loaded and ready, the Uzi BB Carbine is as quick as a 9mm to operate and reload, but a whole lot less expensive! With an MSRP of $200—and it’s currently available from Pyramyd Air for $130—the Uzi BB Carbine is amazingly affordable for a totally authentic, all-metal replica. This is the one live-action BB gun of all the latest models available that you just have to own.