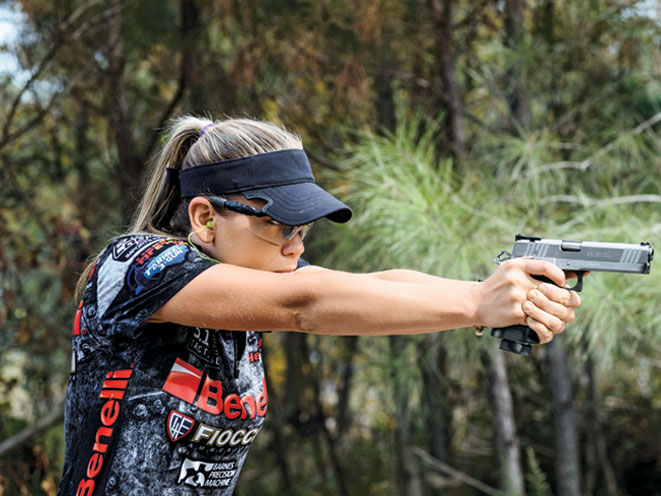 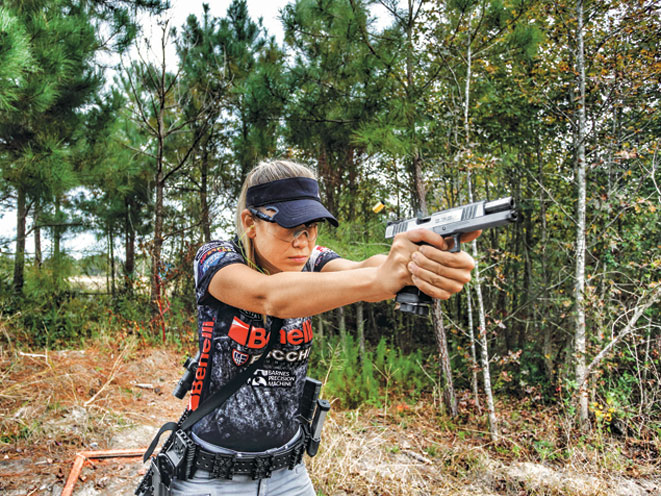 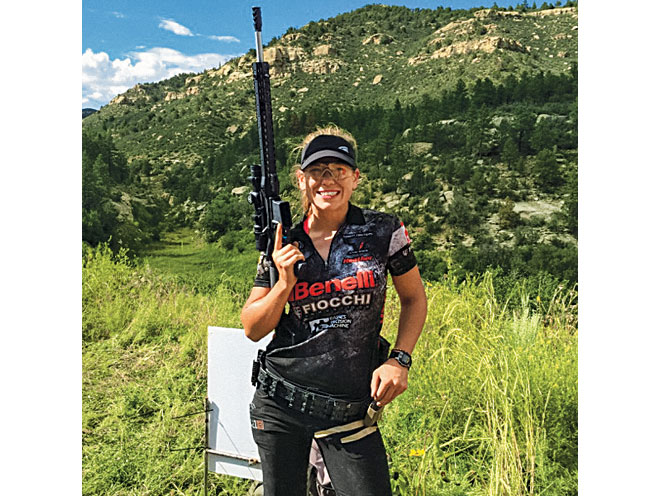 3 of 8
Photo by Morgan Ford
Heather Miller
Miller with her Barnes Precision 3-Gun Match Carbine topped with a Leupold Mark 6. 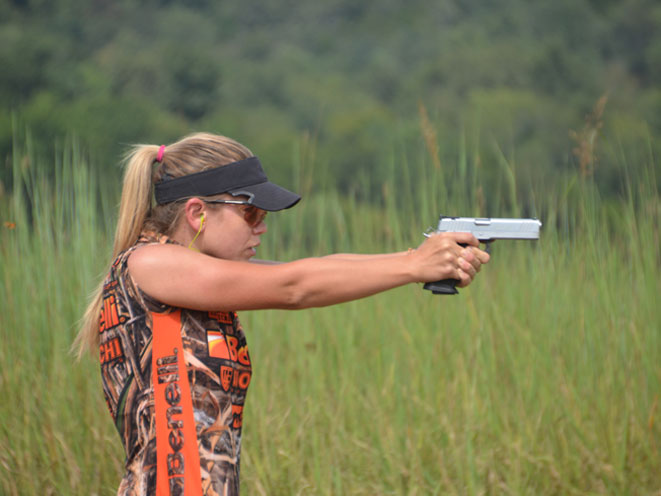 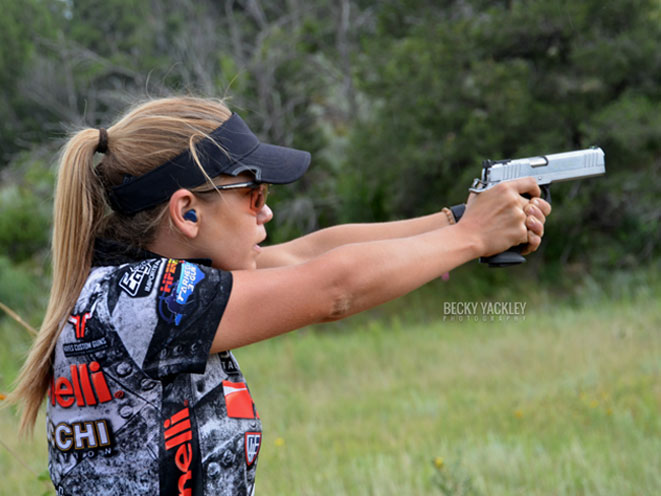 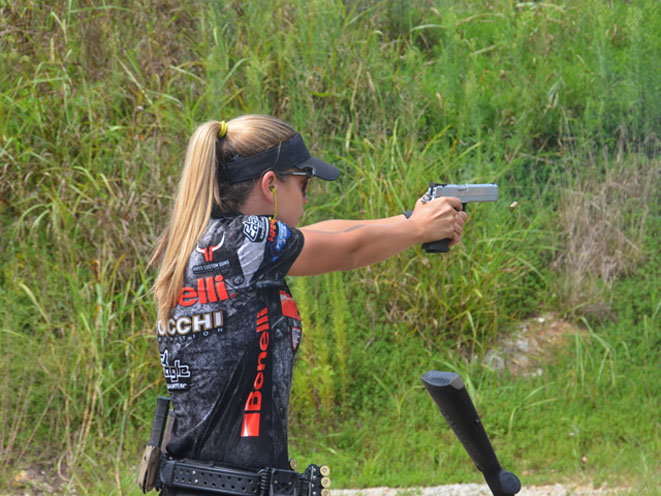 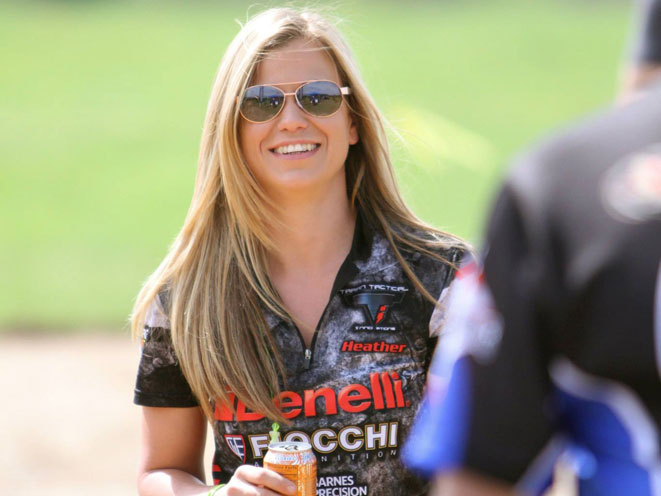 8 of 8
Photo by Benelli
Heather Miller 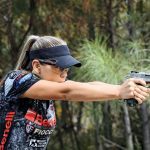 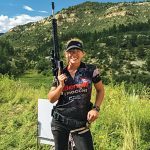 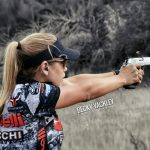 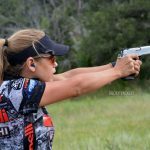 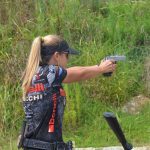 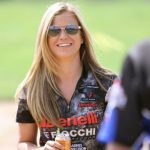 When you look at old-time shooting competition photos (and I mean as recently at the 1970s) you almost never see women shooters. Ask most people to name a woman shooter and the name that comes up is Annie Oakley, who was active in the 19th century. To be fair, she may be the most famous shooter in history, male or female. This situation is rapidly changing, however, as more and more women are entering the competitive shooting arena, especially the action-oriented sport of 3-Gun.

Heather Miller is one of these rising stars, and she recently finished 2nd High Lady in the Open Division of the Rocky Mountain 3-Gun World Shoot. This event is no Sunday stroll, but three days of intense competition covering nine stages with 334 shooters vying for top honors. Miller, originally from rural South Texas, isn’t just a 3-Gun champ, but also competes at the highest levels of the U.S. Practical Shooting Association (USPSA) and the International Defensive Pistol Association (IDPA).

When did you get started in competitive shooting?

I was lucky enough to be raised by parents who thought that solid firearms knowledge was just as important in parenting as instilling your child with all the skills for life success. I shot my first gun when I was four years old, and it was love from first shot. I prided myself on being a gun-shooting country girl. In my mid twenties, I discovered competitive shooting, and after a little encouragement from those around me, I decided to give it a try. I didn’t think of myself as being very competitive, but from my very first USPSA match I knew I had just discovered my passion. It has been a wild, epic journey ever since, and it has really only just begun.

What is your favorite type of shooting activity?

I love to shoot. It brings such an immense joy that it is hard to state a favorite. If I had to pick, it would be shooting steel with pistol, rifle or shotgun. There is something truly rewarding about hearing the ring of steel. The heavy smack of AR500 steel falling or hearing the ting of the plates while knocking them down with my SPS Pantera 9mm is pure pleasure. I could literally have the worst day ever, and the moment I drive through the gate of Woody’s Rifle & Hunt Club, it all disappears.

What was the first gun you owned?

The first gun I ever owned was a Red Ryder BB Gun, seriously. And no, I obviously never shot my eye out. My first real gun was a Sears and Roebuck .410 single-shot shotgun that belonged to my father. It was his when he was 10 years old, and it became mine when I turned 10. I used to have the hardest time trying to cock the thing. I had to brace it on my leg and push down with all my might. By the time I had it cocked and ready, whatever rabbit, quail or dove I saw had high-tailed it out of there. Eventually, though, my hands became strong and I became a hunting machine.

If you could only own one gun, what would it be?

One gun? Is this a serious question? I have never let the thought enter my mind. I shoot 3-Gun because I can’t pick just one gun; there are just way too many applications and uses for each type. I love my rifle, pistol and shotgun equally for good reasons. Each of the guns I run are tried-and-true, reliable, lead-slinging machines. I only run guns that I can stand behind, and my SPS Pantera 9mm 2011, Benelli M2 shotgun and Barnes Precision Machine Three-Gun Match carbine are my favorites. That’s why I shoot the heck out of them.

What is the most important lesson you’ve learned as a pro shooter?

There are so many lessons that you learn in all the various disciplines of shooting, but the greatest one is to never give up. Even if I completely bomb a stage, if something breaks, if there is a malfunction or my plan has completely gone out the window, you will never see me give up. I am in the fight to the very end, and when I am finished, I can hold my head high knowing I did everything I could. You can’t let a bad stage ruin the rest of your match or your day. Remember, you are breathing, you’re outdoors and you’re surrounded by some of the greatest people who share the same values as you do. Life is good.

Do you have a favorite shot that stands out?

The first time I shot a silhouette steel target at 900 yards from the window of a makeshift house at my local shooting club. I hit it on the first shot, right in the center. There is something truly rewarding about shooting at things and hitting them, especially out to distances that require magnified optics to clearly see. I am currently honing my precision rifle skills and hope in 2016 to do more Precision Rifle and Designated Marksman matches.

What has been your toughest challenge in competition?

The hardest challenge in shooting is the mental game. You can train and train and train, but if your head isn’t set right, you will not perform at your best. When you are shooting a competition, you need to relax and be confident in yourself. Don’t worry about the other shooters who just shot the stage faster or potentially better than you. Just shoot your game and not someone else’s. If you put in the time to train, and have done all in your power to be your best before the match starts, you’ve done all you can. You know what to do, and so does your body, so just let it do its thing.

What is your everyday carry gun?

I have a few, but all summer long I have carried the M&P Bodyguard .380. I can carry it comfortably in almost any attire—while hiking, working out or most any activity. I also carry my new Bersa BP9CC. This is a great, affordable, flat-shooting 9mm compact pistol. It has an incredibly smooth stock trigger and is comfortable and pleasant to shoot. I’ve run just about everything I can through it, and she has yet to hiccup once. I tinkered a little bit with the mag release to make it easier to drop mags, but that is all. It is a great option for those that want a simple, affordable, reliable compact 9mm pistol for self-defense.

Whom do you admire most in shooting?

Julie Golob. She is an incredible shooter and competitor, and is the ideal female role model. The greatest thing about Julie is that the bubbly, sweet badass that you see on TV and in print is just as awesome in person.

What advice would you have for a new shooter?

Don’t be afraid to get out there and try. Remember, at one point in time we were all new. The shooting community makes up some of the greatest people in the world. We are a helpful bunch so don’t hesitate to ask someone who you know that shoots for help. Most likely they will be enthusiastic to help.

I also advise new shooters to try before you buy. Whether you are buying for self-defense, hunting or sport shooting, be sure to try the guns and gear before you buy them. Since there are so many different options to suit your needs and lifestyle, you need to figure out what fits you, not the helpful neighbor or gun shop owner. Take their advice, but try it first for a while. Folks like me will let you try anything they have, so don’t be afraid to ask.

Lastly, take advantage of all the different resources and programs available. I recommend checking out the NRA and National Shooting Sports Foundation, as well as A Girl & A Gun, The Well-Armed Woman and Babes with Bullets.

What do you do when you aren’t shooting?

When I am not shooting, you can find me in the mountains. I am a mountain girl through and through, and I love nothing more than to escape into the wild with my ultra-light backpacking kit and disappear where cellular coverage is non-existent. I am currently honing my bushcraft and survival skills when I’m out there, and use that time to meditate and become one with my wild side. It’s on my bucket list to hike the Continental Divide Trail all the way through, as well as the Pacific Crest and Appalachian trails. Just need to figure out how I’m going to take six months off at a time. 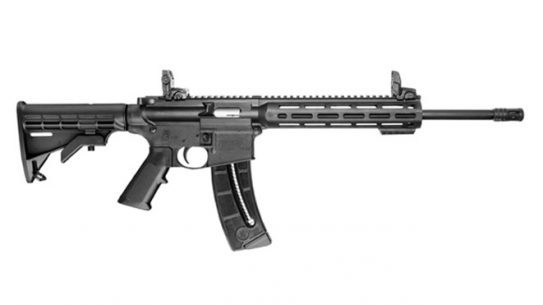