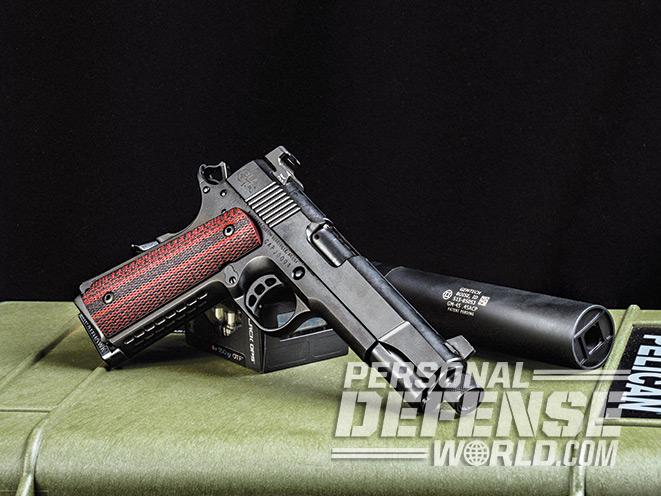 1 of 10
Nighthawk Custom GAP 1911
Nighthawk Custom’s latest partnership with G.A. Precision has resulted in a battlefield-ready 1911 in .45 ACP that is built with several reliability-enhancing features and to accommodate sound suppressors like Gemtech’s GM-45. 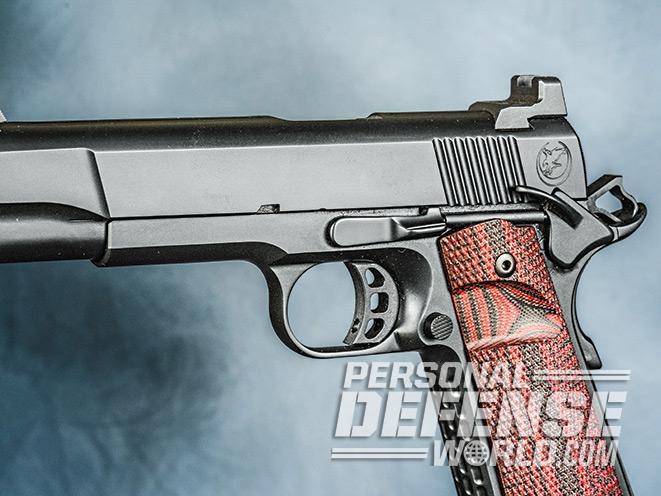 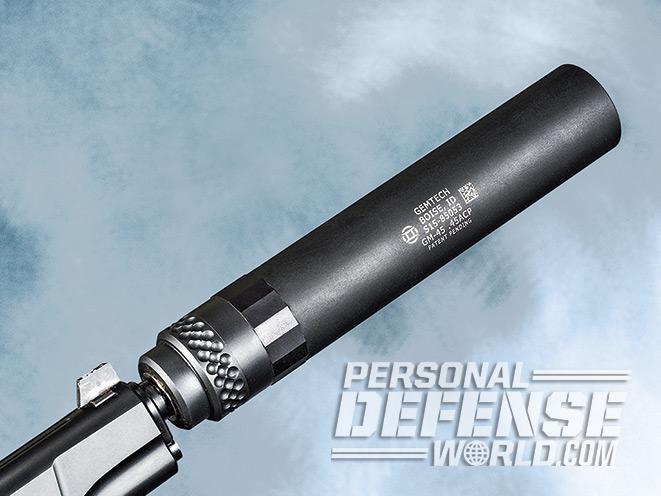 3 of 10
Nighthawk Custom GAP 1911
The author tested the GAP 1911 with Gemtech’s GM-45 suppressor, a monocore design that can easily be cleaned and serviced by the user. 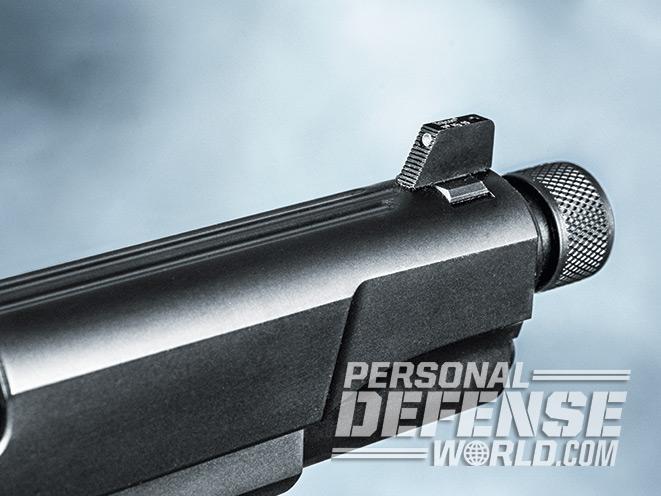 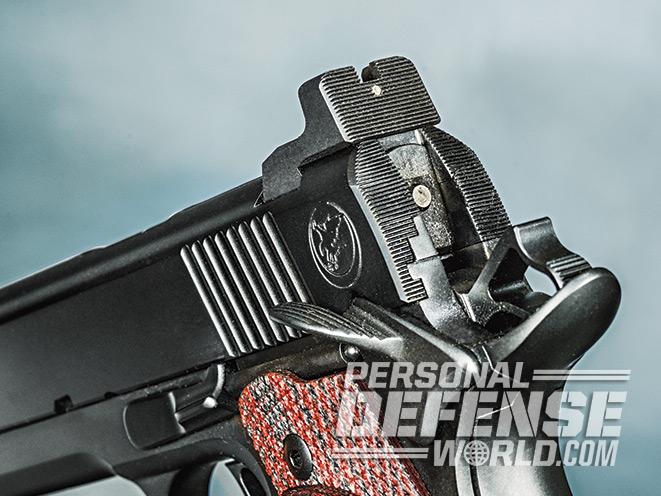 5 of 10
Nighthawk Custom GAP 1911
The backside of the slide and rear sight are serrated to reduce glare. 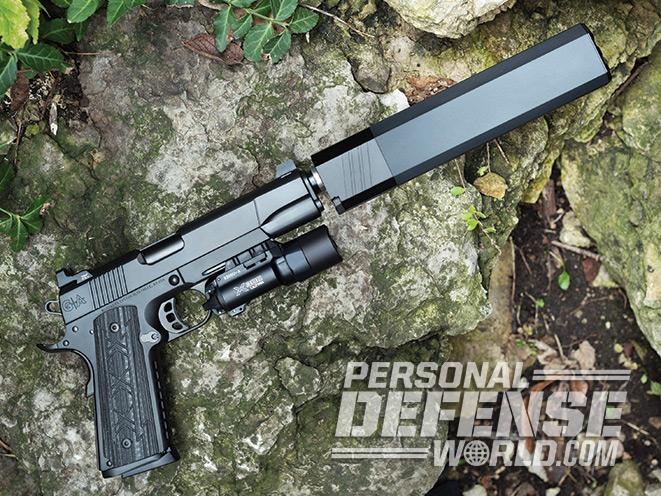 6 of 10
Nighthawk Custom GAP 1911
The gun in this exclusive story is representative of the G.A. Precision gun. However, different grips and slightly different engraving will be found on future production models. Here’s the latest GAP 1911 shown with a SilencerCo Osprey. 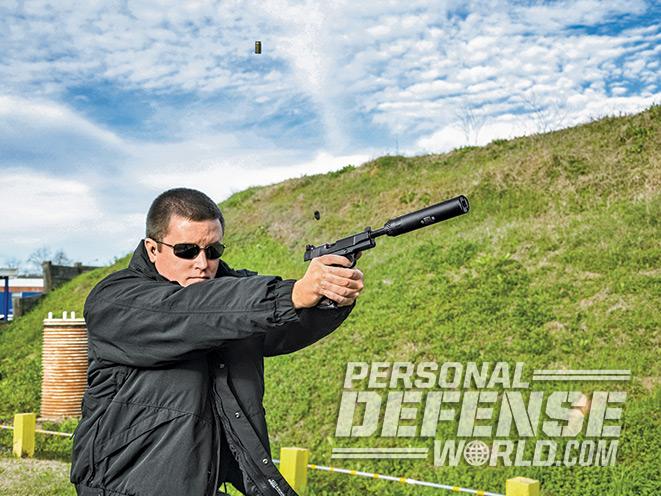 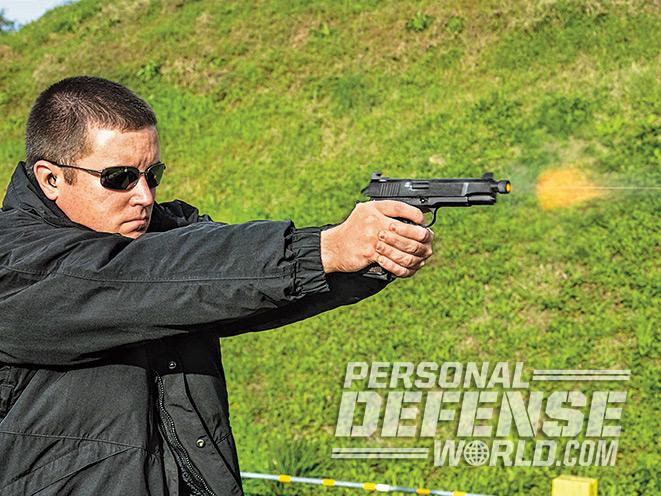 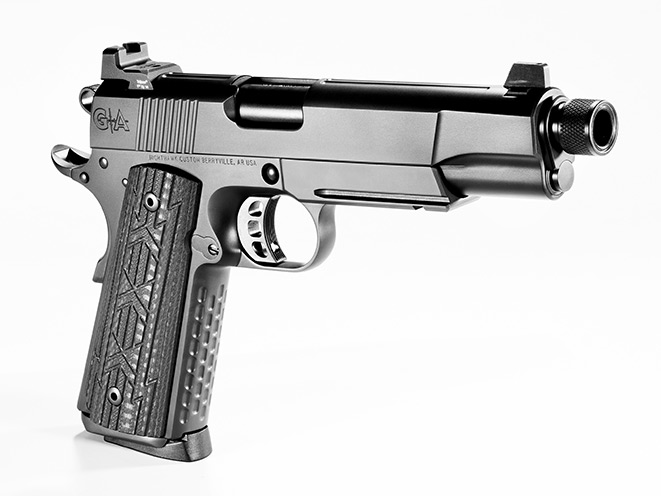 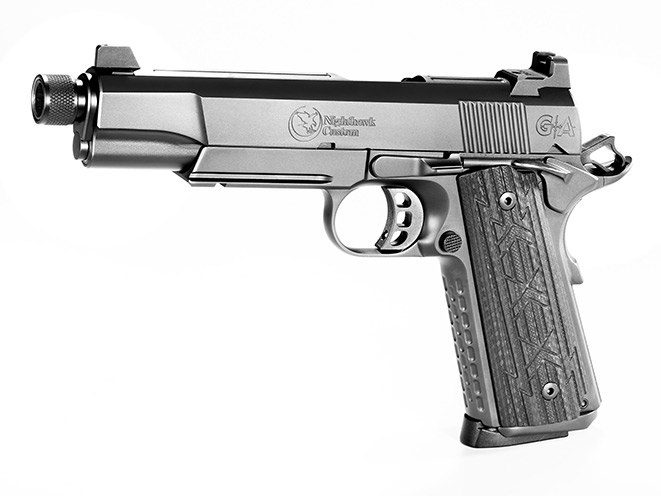 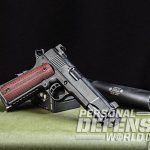 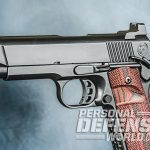 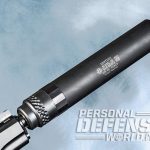 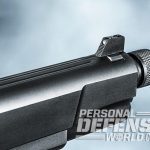 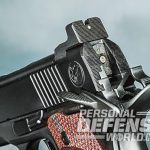 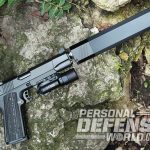 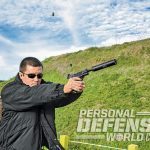 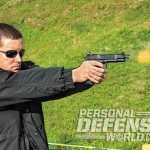 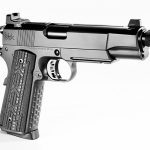 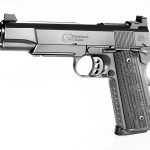 Anytime two outstanding companies combine efforts, the result is always something special. G.A. Precision has been in business since 1999 and specializes in precision rifles for the sportsman as well as premier military and law enforcement tactical units. When G.A. Precision decided it wanted to do a limited-edition 1911, the company turned to Mark Stone and the crew at Nighthawk Custom. Working together, these companies designed an all-business battle pistol that is more than the sum of the parts.

The basic foundation of the GAP 1911 model is pure Nighthawk. It is a full-sized, 5-inch-barreled, Government model that is built around the quality Nighthawk forged frame and slide. As is customary with all Nighthawk pistols, the frame and slide are precision fitted and hand-lapped. The operating controls on the GAP 1911 include a skeletonized aluminum trigger with an adjustable overtravel stop, an extended magazine release, a single-sided extended safety and a precisely fitted beavertail grip safety with a speed bump.

The frontstrap and the beavertail have each been relieved to provide a higher and improved purchase on the pistol. The slide stop is designed with a pronounced ledge to improve manipulation when releasing a locked slide or manually locking the slide to the rear. I have come to appreciate this minor, but effective, design when running my Nighthawk GRP Recon while wearing gloves.

The GAP also features the unique Nighthawk T3-style extended magazine well. The T3 design offers an extended and flared surface on the sides and rear of the magazine. The sides of the extension taper toward the frontstrap and match the contour of the magazine’s extended baseplate. The internal edges are perfectly blended with the magazine well. This design is very functional while offering a lower profile than the popular Smith & Alexander magazine well/mainspring housing assemblies. It is also an attractive addition.

However, there is far more to the GAP model than the operating controls. The pistol is perfectly smooth with no sharp edges with the exception of the front sight blade. The edges of the flat mainspring housing are perfectly blended into the frame, as are the edges of the grip safety when it is depressed. Nighthawk selected to equip the GAP with checkered G10 stocks from VZ Grips that feature a scoop to facilitate access to the magazine release. The pistol’s trigger pull measured a crisp 3.8 pounds with no overtravel.

The front of the slide features Browning Hi-Power-style relief cuts. The rear cocking serrations have rounded edges that alleviate abrasions while still providing a positive purchase surface. The frontstrap and mainspring housing feature a chainlink pattern that is both attractive and functional. The top of the slide has three ball-cut grooves that match the cocking serrations that are both attractive and serve to reduce the glare off the top of the slide.

The most prominent features on the GAP pistol are the new Heinie SlantPro Straight Eight Suppressor night sights. The height of both the front and rear sight has been increased in order to provide a clear sight picture when a suppressor is mounted on the pistol.

The Straight Eight configuration consists of a tritium insert mounted in the rear sight, centered below the aperture, and a second inset that is mounted in the front sight blade. The two dots are stacked in a figure-eight to align the sights. Most shooters find this design faster to align than the more traditional three-dot sights. Finally, the leading edge of the rear sight has been deeply relieved to provide a cocking surface, should it be required.

As with other Nighthawk Custom pistols I have tested, the GAP 1911 impressed me, as it was functional while offering the custom features that Nighthawk is known for. The combination of features, both functional and cosmetic, reminds me of some very high end custom shop builds. The soft beveled edges, combined with the matte black finish to include the barrel, give the GAP a warlike appearance that almost absorbs light. Each feature is well thought out and executed. I also appreciated the clean slide that is free from any extraneous markings. The only markings are the two company’s logos, which are located on the slide behind the cocking serrations. Another nice touch is that each pistol has a custom serial number with a “GAP” prefix.

As I have come to expect, the GAP 1911 was 100-percent reliable with a wide variety of ammunition. On the range, I really came to appreciate the enlarged sights. They were very quick to pick up for both the first shot and any subsequent shots. Surprisingly, the higher sights did not seriously interfere with any of the 1911 holsters I routinely use.

We tested the Nighthawk GAP 1911 with three rounds that varied significantly in bullet weight and velocity. HPR’s 230-grain FMJ is a standard military ball load that averaged 840 fps. We also tested defensive loads from PNW and HPR. The PNW TacOps is a 185-grain, solid-copper hollow point that averaged 968 fps. HPR’s entry into the defensive market is its Black Ops Open Tip Frangible (OTF) load. The .45 ACP load weighs 150 grains and averaged 1,165 fps. The accompanying chart reflects the accuracy testing, with all three loads producing off-hand groups of under 1.5 inches, at least when I did my job.

I was fortunate to have just received one of Gemtech’s new GM-45 suppressors. The GM-45 features a monocore design that allows the user to disassemble and clean the baffles. Part of this engineering involves having each chamber specifically designed for the heat and gas pressure in that part of the core. This allows the core to be more efficient and increases the round life of the suppressor. Without the mount, the GM-45 is 6.2 inches in length and weighs a mere 5.5 ounces. It is 1.375 inches in diameter and, according to the company’s data, provides a 21- to 23-dB reduction when dry and a 32- to 35-dB reduction when wet. With the GM-45 installed, the GAP 1911 proved completely reliable with all three test loads.

The MSRP on the Nighthawk Custom GAP 1911 is $3,695, which is slightly more than Nighthawk’s GRP or GRP Recon. However, given the amount of truly custom features found on the GAP 1911, the price is very reasonable. I would be remiss if I did not mention that while offering a number of standard models, Nighthawk will also build a truly custom pistol to the individual specifications of the customer. For those looking for a high-performance .45 ACP suppressor host, you need not look any further than Nighthawk Custom. 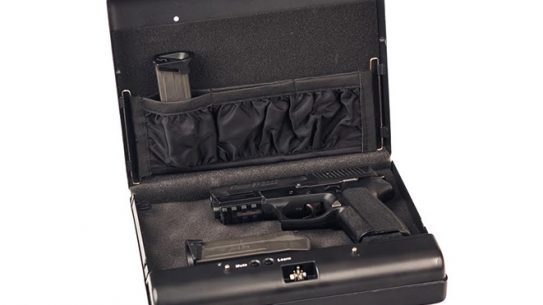 The Digital Portable Firearm Vault is ideal for home, travel and portable storage.