The P320 is built for modern shooters. Note the accessory rail molded into the frame.

America’s love of the .45 ACP cartridge will only deepen with the introduction of the Sig Sauer P320. This ultra-modern pistol is nothing like a 1911, but that’s not going to matter to devoted .45 fans. Once they fire a few rounds and discover the P320’s accuracy, controlled recoil and ease of operation, they won’t want to put it down.

The heart of the P320 is its modular construction. A rectangular stainless steel frame fits snugly inside a one-piece polymer frame housing that contains the grip, the triggerguard and the dustcover. The steel frame is a box design that houses the upper magazine well, the fire control mechanism and the front and back frame rails. The frame is universal and will work with any polymer frame housing, slide, magazine and any caliber barrel for which Sig makes P320 components. By just switching components, any P320 can be a full-sized .45 ACP one day and a subcompact .45 the next. The frame is serialized and purchasing all other components does not require a background check. 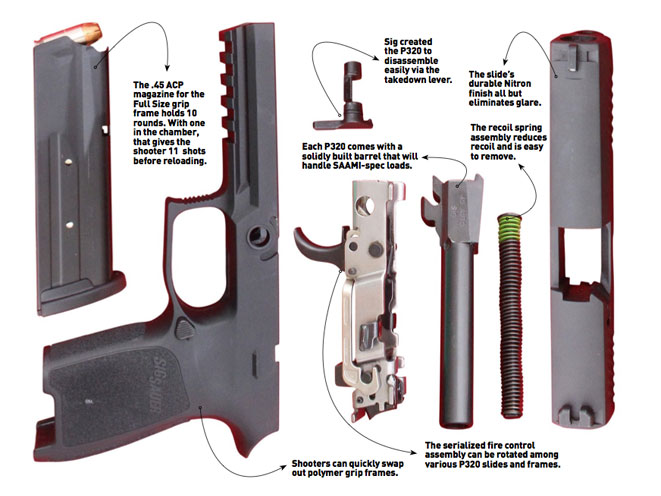 The P320’s safety system is also a step ahead of the competition. Most other polymer pistols need either a tabbed or hinged trigger to make them “drop safe.” The P320 doesn’t need a tabbed trigger, however an LE buyer can order one if desired. I’ve used a number of guns with tabbed or hinged triggers. I shoot them well, but I prefer the wide, smooth trigger of the P320. It simply feels more like a 1911 or revolver trigger. A mag-disconnect safety is also available (LE only), should the buyer want one. In addition, the takedown procedure is very safe. Some pistols require that the trigger be pulled to decock the striker prior to disassembling the gun. This can cause a negligent discharge if the user forgets to eject a live round from the chamber after removing the magazine when unloading. Other striker-fired gun designs avoid pulling the trigger but require a decocking lever to be depressed before the slide can be removed. The P320 is simpler: Make sure the gun is empty, lock the slide open, turn the takedown lever 90 degrees downward, release the slide lock and push the slide forward off of the frame.

The P320 also has the latest enhancements. The buyer can have the gun with either three-dot white sights or SIGLITE night sights. The SIGLITEs have a flat front that can be used as a cocking ledge by those who are trained in emergency one-handed manipulation of the pistol. In addition, the ejector is lengthened and the ejection port is lowered and flared for reliable ejection; the polymer frame housing has stippling on all sides; the front of the triggerguard is squared and striated for a “hooked finger” two-handed hold; the magazine release is raised; the slide release is ambidextrous; the dust cover has a Picatinny accessory rail; and an extra-wide magazine well opening makes reloading very fast. 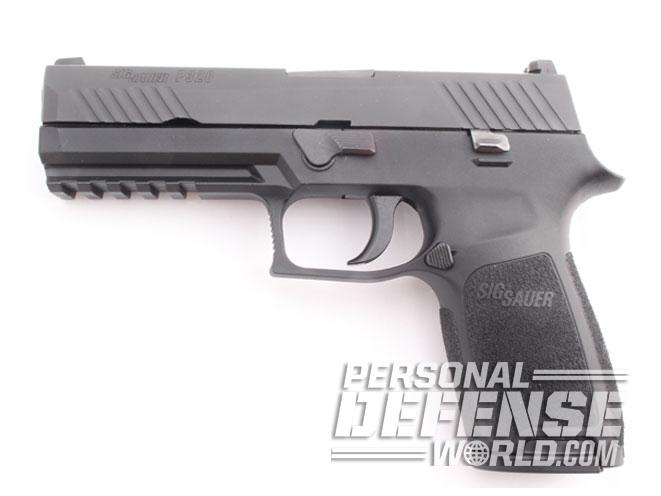 The P320 was examined for fit, finish and function when picked up at the Florida Gun Exchange. No tool-marks, uneven surfaces or poorly conformed lines were noticed. The black Nitron finish of the slide was smooth and evenly colored. There were no rough or sharp edges to cut my skin or abraid clothing, and all of the safeties worked.

In most other pistols this would significantly degrade accuracy. Surprisingly, it had no affect on the accuracy of the P320, because spring pressure held the slide and frame in consistent relationship to each other. Because of this, P320 owners should regularly check to be sure that the front of the slide pops smartly back up when it’s pressed against the frame. If it doesn’t, it’s not difficult to have a gunsmith check it and replace any worn parts.

After cleaning and applying a light coat of TW-25B synthetic grease to internal parts, the P320 was checked for function. The slide moved freely and the slide lock firmly held the slide in place when a magazine was in the mag well. When moderate pressure was applied to the slide lock lever, the slide moved smartly forward into battery and locked firmly in place. The magazine ejected clear of the gun when the release was pressed and the two-stage trigger was smooth. The first stage was light and the second was heavier. Total travel was about 0.4 inches and the trigger broke consistently at 7 pounds.

The P320 was tested for accuracy and velocity from the bench at the Flagler Gun Club and was also used to shoot the Army L course at the club’s weekly Bullseye match. It also was tested in action drills at 3 yards and 10 yards. Test ammunition included Winchester’s 230-grain PDX1 bonded JHP, Hornady’s 220-grain Critical Duty +P, Freedom Ammunitions‘ 230-grain Hush JRN and CorBon’s 230-grain JHP +P. In addition, Black Hills’ 200-grain LSWC was used to fire the Bullseye match.

Accuracy tests were conducted from the bench at a distance of 15 yards because the P320 is primarily intended to be a close-range tactical pistol. Three 5-shot groups were fired with each load using an MTM Front Sight rifle rest and sand bags. The smallest group was 2.68 inches and was fired by two different loads, the Winchester PDX1 and the Freedom Ammunition Hush. The overall average for all groups was 3.3 inches—clearly acceptable for a tactical pistol.

Velocity from the Sig Sauer P320’s 4.7-inch barrel was similar to other full-sized .45 ACP semi-autos. 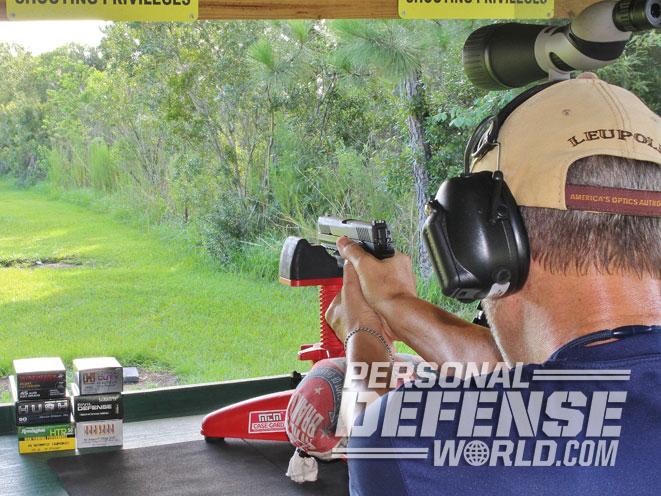 The tactical drills were conducted from the holster at 3 and l5 yards. When the buzzer sounded, I drew, stepped to the right and engaged three targets with a total of five rounds. The first target was double-tapped to the chest, the second received a single headshot and the third received one to the chest and one to the head. According to my timer, the average time for shots fired at 3 yards was 8.32 seconds and the score was 85/100.

RELATED STORY: ‘Have It Your Way’ with Sig Sauer’s Modular P320 Series

At 15 yards, the average time increased to 11.25 seconds and the score was the same. While firing a warm-up drill I did have one failure to fire, which occurred when I attempted a short reset and failed to let the trigger go fully forward. This was a reminder that different guns have different trigger reset points. In real life, it’s best to develop shooting habits that work with all handguns, rather than ones that only work with your favorite IPSC gun.

The final test involved filling the pistol to capacity with five different loads and firing it as fast as possible using an isosceles stance at 15 yards. The loads ranged in weight from the 114-grain PolyCase ARX load, which has a plastic/copper bullet, to Winchester’s 230-grain PDX1 bonded JHP. The result was a 4.22-inch group located about 2 inches left of center. There were no stoppages or failures to fire, and all loads shot to the same point of aim. All things considered, this is a very reliable and highly versatile .45.

The P320 in .45 ACP is very reliable, has good tactical accuracy and has very controllable recoil. At $674, the Full Size gun with night sights is a very good bargain for the person who wants a .45 for personal defense.