Pocket Rimfires: The NAA Sidewinder and Other Mini-Revolvers

LaserLyte’s Mighty Mouse laser (shown) can help you get on target more quickly with the Sidewinder, a mini-revolver with a swing-out cylinder.

North American Arms’ Sidewinder earned its name because, like most modern double-action revolvers, it has a cylinder that can be swung out to the side for loading. The Sidewinder has a 1.5-inch barrel, stainless steel construction, an overall length of 5 inches, a height of 2.87 inches and a width of 1.06 inches. It’s a single-action design, which means it has to be cocked for each shot, but the hammer spur is easily accessible and serrated, and it has a serrated spur trigger.

Notches at the rear of the cylinder allow the hammer to be lowered and locked in place between chambers and act as visual loaded-chamber indicators. The sights consist of a front post and a fixed rear notch. You can also get the Sidewinder with a .22 LR conversion cylinder to make for less expensive practice. The factory grips are a smooth laminated wood.

The Mighty Mouse by LaserLyte will fit just about any of the NAA mini-revolvers. It features what I call grab-and-go activation—grasp the gun properly and the laser is activated. Besides allowing fast target acquisition and recognition, it has the red dot intimidation factor that, thanks to TV, everyone is aware of. The laser unit replaces the factory grip entirely, and a stalk that extends up from the right grip panel projects the laser beam over the top of the cylinder. It’s a tough unit that’s made from glass-filled nylon and attaches using a hex-head screw. The right grip panel holds the 392 batteries and a coin-slotted compartment cover allows for a battery change without having to remove the grips. The unit boasts a 650NM, 5MW, Class IIIA laser and has a constant-on life of over one hour.

My sample came with the batteries installed and three extras, plus hex wrenches for the grip and sight-adjustment screws and instructions. The tradeoff is the unit adds 0.75 ounces of weight, extends the gun’s width to 1.25 inches, and it is 3 inches long. I installed it on the Sidewinder and tried to adjust it to point of aim (POA) at 7 yards with the fixed sights. I turned the windage screw out as far as it would go and the red dot was still left of POA and slightly high. Given the purpose of this handgun, I’m not overly concerned. 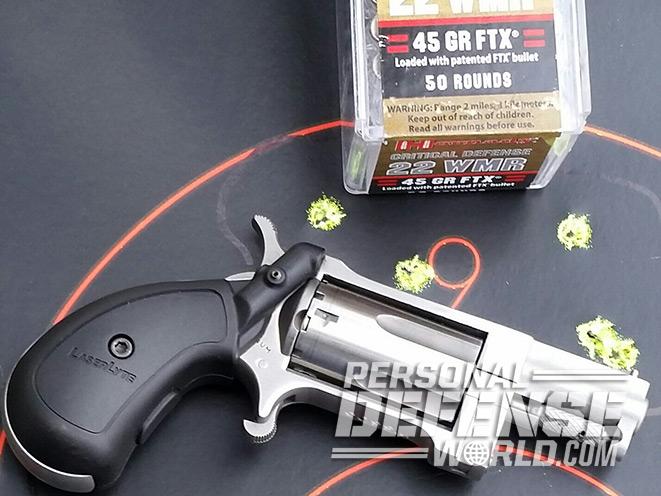 Let’s talk about “purpose.” The NAA Sidewinder is not my idea of a primary defense handgun, but maybe a second or even third backup gun. That being said, it can and has been used as a primary gun. With defense in mind, I elected to test my Sidewinder with these .22 Magnum cartridges. The CCI V-Max is first. it features a 30-grain jacketed bullet with a Poly-Tip embedded in the hollow nose. With its velocity readings, it might be devastating for contact shots. Next is Hornady’s Critical Defense round that’s loaded with a 45-grain FTX bullet, with a polymer plug within its serrated, hollow nose for expansion. Then there’s the Speer Gold Dot Personal Protection cartridge with its 40-grain GDHP bullet, which I’ve found expands well even from a 1-inch barrel.

The Sidewinder is anything but a target gun with its tiny sights, but I was interested to see what accuracy potential it had at 7 yards. The group winner was Hornady Critical Defense with a five-shot cluster that covered 2.76 inches. The average for all of the test loads at the range was about 3.5 inches.

Besides the Sidewinder, NAA makes other versions of its mini-revolver, plus variations of these differing models with short barrels for “pocket” use. These single-action mini-revolvers are stainless steel, with spur triggers and five-shot cartridge capacities, but these other models require the cylinder to be removed for loading/unloading. There are also different methods of cylinder removal that are improvements on the basic design and speed up the process while limiting the fine motor skills required.

Barrel lengths vary from 1 to 2.5 inches, and some barrels have solid or vent ribs, and barrel porting is even available. The options are seemingly endless, with different grips, adjustable rear sights, laser sight options, as well as high polish, blued and even gold-plated finishes available.

Sporting a 1.6-inch barrel, the standard model in .22 Magnum tips the scales at 6.5 ounces. It has the traditional NAA cylinder base pin, which has a push button at the end that allows it to be removed, along with the cylinder for reloading. The revolvers in the Mini-Master series all offer what I’d call a pull-down, slide-out mechanism for extracting the cylinder base pin, making cylinder removal easier. This series includes the Black Widow, which has distinctive “hourglass” grips and sight options, and can also use the Mighty Mouse laser like all other .22 Mag NAA revolvers. There’s also the Pug with a 1-inch, solid-rib barrel, rubber grips and a big dot or tritium front sight.

All the aforementioned revolvers have the convertible .22 LR/.22 Magnum option. Some of these revolvers can also be had with a unique folding grip/holster unit that looks like a clip-on pocket knife when worn, adding to their concealed-carry appeal. In all, NAA has something for everyone.