The new Baby Desert Eagle pistol from Magnum Research does not actually share a lineage with the famed original Desert Eagle, although the former is made in Israel like the latter was for a time. The name is actually meant to capitalize on the notoriety of Magnum Research’s large Desert Eagle powerhouse while representing a more human-sized offering from the company. While it is has “baby” in its name and is indeed significantly smaller than the Desert Eagle, the pistol I tested was a full-sized duty handgun.

It is no surprise why Magnum Research wanted to make use of the Desert Eagle name, which immediately brings up images of one of the most famous movie guns in recent history. Anytime a director needs to make a big impression, they select one of these huge gas-operated, rotating-bolt pistols that handle everything from the .357 Magnum to the .50 AE.

The original Desert Eagle was developed by Magnum Research and manufactured in Israel by Israel Weapon Industries (IWI) until a few years ago, when production was moved back to the U.S. After Kahr Arms acquired Magnum Research, the relationship with IWI was re-established and Magnum Research started importing the Israeli Jericho pistol under the Baby Desert Eagle name. 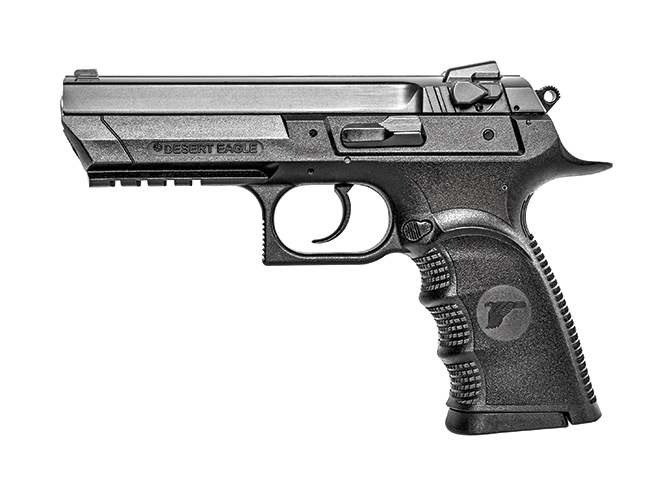 The design of the Baby Desert Eagle III is based on the tried-and-true Czech CZ 75 design, which places the slide rails inside the frame. In fact, at the time of its introduction, many considered the CZ 75 to be the greatest full-capacity 9mm pistol in the world. With the slide riding inside the frame, there is a very tight fit between the two halves, which contributes to its accuracy.

This is a traditional hammer-fired, double-action/single-action (DA/SA) pistol that offers superior reliability and an easy second-strike capability. The original Jericho pistol, first introduced in 1990, was named the “941” and designated for military and police use in Israel. The safety/decocker on these first pistols was installed on the frame. The current Baby Desert Eagle III has the decocker on the slide like the Beretta M9. Also, the original Jericho pistol featured polygonal rifling while the current offering from Magnum Research has traditional land-and-groove rifling.

One other notable difference is that the original Jericho pistol was also designed for a new cartridge, the .41 Action Express, to provide significantly higher muzzle energy over the standard 9mm round without a significant decrease in magazine capacity. The new Baby Desert Eagle III is available in 9mm, .40 S&W and .45 ACP in both full-sized and “semi-compact” models. Buyers can also choose between traditional steel-framed or more ergonomic and lighter polymer-framed versions. The grip dimensions remain the same, which allows for all Baby Desert Eagle III magazines of the same caliber to be fully interchangeable across the entire line, and the new pistols will accommodate older Baby Desert Eagle II magazines as well. The 9mm pistols are available with 10- or 15-round magazines, while .40 S&W models are available with 10- or 13-round magazines. Only steel frames are available for the .45 ACP pistols, which come with 10-round magazines.

The overall shape of the pistol has been redesigned by trimming the slide and frame to more closely resemble the contours of the standard Desert Eagle and reduce weight. Indeed, it has a definite angular shape when viewed from the front. The effect is significantly more pronounced on the polymer-framed version which has itself been given a matching angular design. The steel slide features an evenly applied matte black oxide finish and low-profile, Novak-style, dovetailed, three-dot sights. These are fixed but can be replaced with adjustable units or night sights.

At the rear of the slide is the ambidextrous, teardrop-shaped safety/decocker. This allows the operator to safely lower the Commander-style hammer from the SA to the DA position while also engaging the hammer block safety mechanism. The pistol also features an internal firing-pin block safety mechanism. The left side of the slide features highly visible white and red dots to indicate the “safe” and “fire” modes—up for “fire” and down for decock and “safe.” The Commander-style hammer is easy to reach and manipulate.

The match-grade, 4.43-inch barrel is left “in the white” and features standard land-and-groove precision rifling. A steel, full-length guide rod rides underneath. The frame features a left-side-mounted slide release that I found very easy to reach and operate. The magazine catch is reversible for use by either right- or left-handed shooters, and the steel magazines drop free with ease. The magazines have polymer baseplates and followers. Two magazine are included with each pistol.

The trigger on the new Baby Desert Eagle III has also been improved with a smoother DA/SA pull that measures 12 pounds in DA and 4 pounds in SA. I found the DA pull pleasant with no noticeable stacking. The SA pull had a bit of travel but broke cleanly.

The frames on both the steel and polymer pistols feature a Picatinny rail along the full dust cover in front of the squared and enlarged triggerguard. This makes it easy to install a light, laser or combination unit. Both frame styles also feature an extended beavertail that protects the web of the shooter’s hand from “slide bite” as well as an undercut triggerguard to help shooters attain a higher grip on the pistol for less muzzle flip.

The steel-framed model has removable grip panels and a straight frontstrap with vertical grooves. The polymer-framed model I tested features aggressive checkering at the front- and backstraps as well as ergonomic finger grooves at the front for an improved hold even in inclement conditions. The polymer-framed Baby Desert Eagle III is almost 10 ounces lighter than its steel-framed counterpart—something you’ll appreciate for everyday carry. The grip frames on both models have been slimmed down for a narrower profile, making the pistols easier to conceal and use by those with smaller hands. The steel-framed pistols do offer a thinner profile overall as well as a lower overall height than the polymer pistols. Essentially, the thinnest Baby Desert Eagle III is the steel-framed semi-compact model, but it weighs more than the polymer-framed version.

The Baby Desert Eagle III performed flawlessly right out of the box with no maintenance performed during a full day at the range. My .40 S&W test pistol weighed 28 ounces unloaded, which helped tame some of the felt recoil. The .40 S&W round is a bit on the snappy side for my tastes, and there is some muzzle flip, but the pistol remained controllable and comfortable to shoot. The grip was also very comfortable and helped keep the pistol locked into my hand.

That said, the CZ 75-style slide design—despite its accuracy-enhancing contributions—is not the easiest to deal with when it comes to handling and slide manipulation. The fact remains that the shooter gets a much narrower amount of real estate to grab a hold of than on more traditional designs. This requires a higher hold on the slide than many of us are used to, and a training adjustment is required for effective and proper use, especially under pressure. 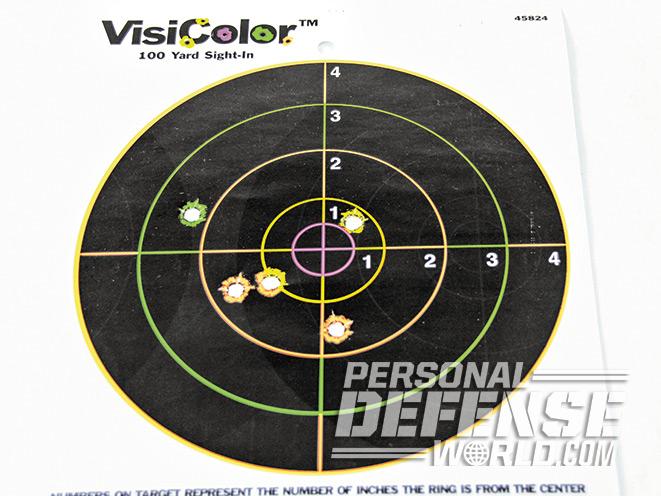 I tested the pistol’s accuracy at 25 yards, the standard distance for a full-sized handgun, from a stable benchrest. Although all of the loads tested were 180-grain hollow points, there were some differences in terms of accuracy and velocity. Five-shot groups measured a little over 3 inches on average across all groups. However, the Black Hills ammunition performed the best with both the highest velocity and the best group sizes, which were all under 2 inches.

The Baby Desert Eagle III’s fit and finish were outstanding, and Israel has a well-earned reputation for producing high-quality arms. Indeed, there has been a growing interest in and admiration for Israel Weapon Industries small arms in the United States, and thanks to the partnership between IWI and Magnum Research/Kahr Arms, this excellent and improved pistol is now available to American shooters.