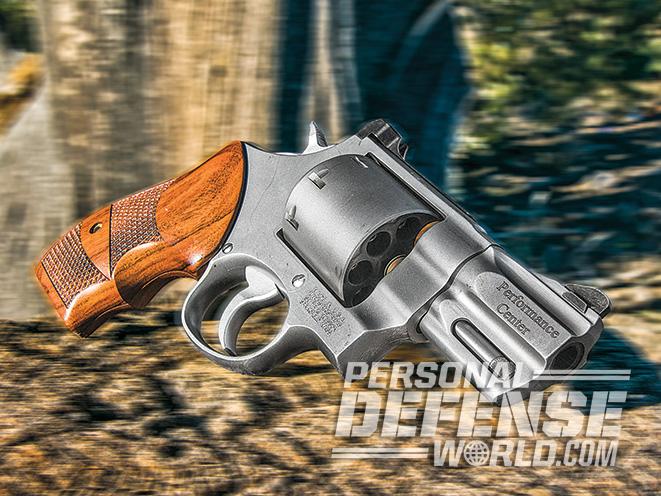 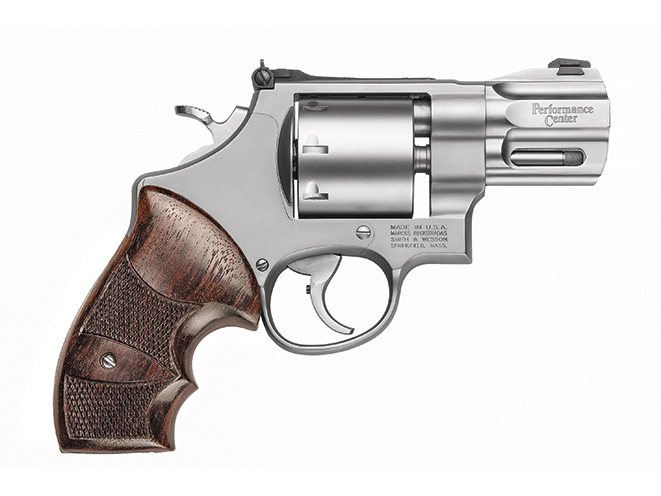 2 of 10
Smith & Wesson Performance Center Model 627
The stainless steel N-Frame allows for shooters to use high-powered ammunition, and the short barrel works well for concealment. 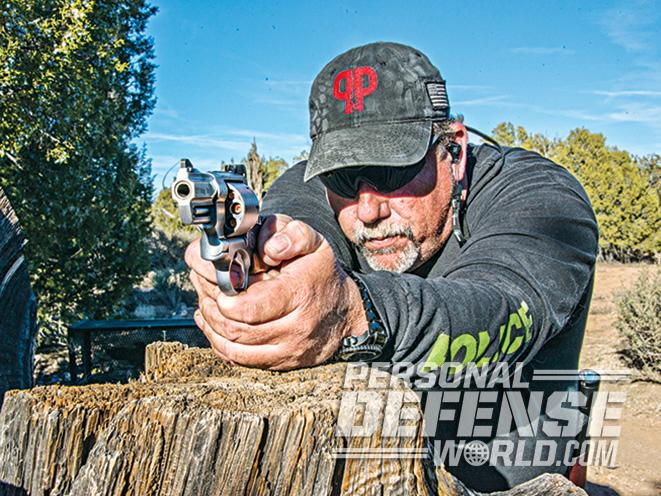 3 of 10
Smith & Wesson Performance Center Model 627
“Shooting this revolver with any of the .38 Special loads was just downright comfortable and very fast.” 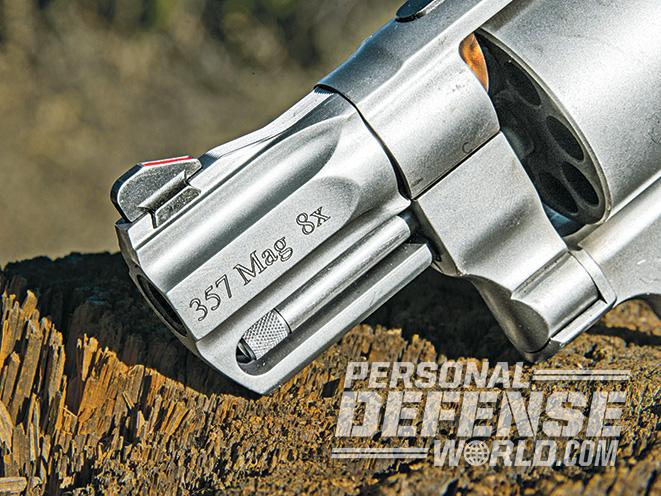 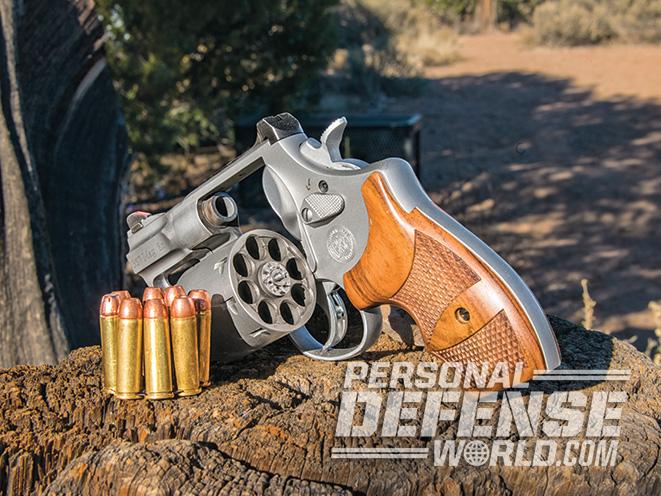 5 of 10
Smith & Wesson Performance Center Model 627
The eight-shot Model 627 can use C-clips, moon clips or speedloaders. 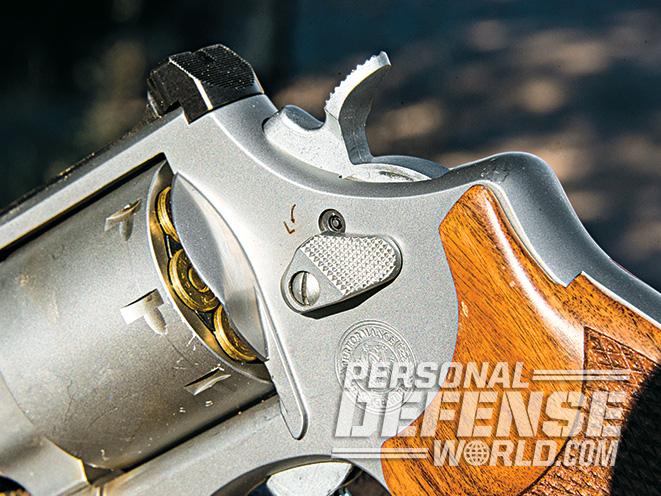 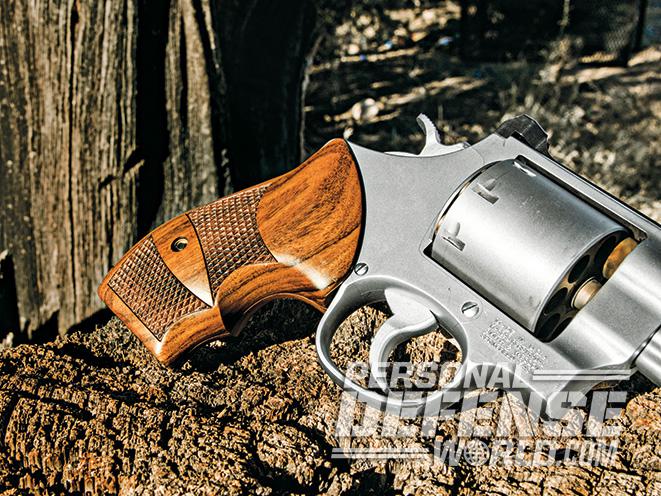 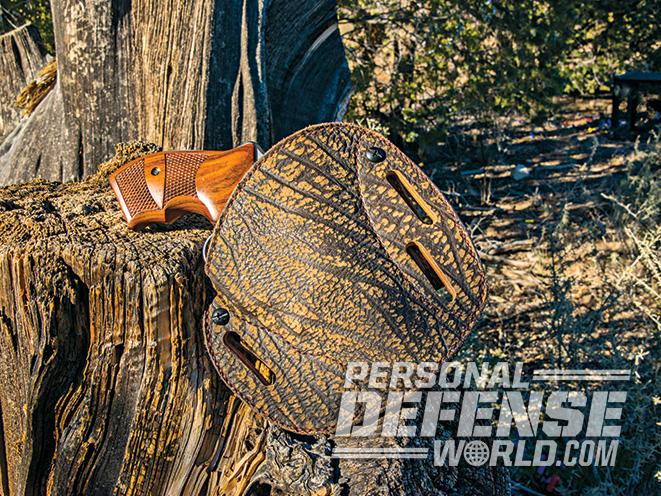 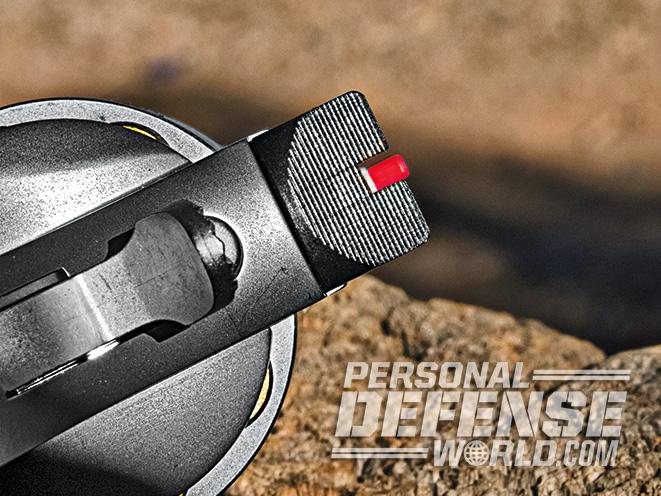 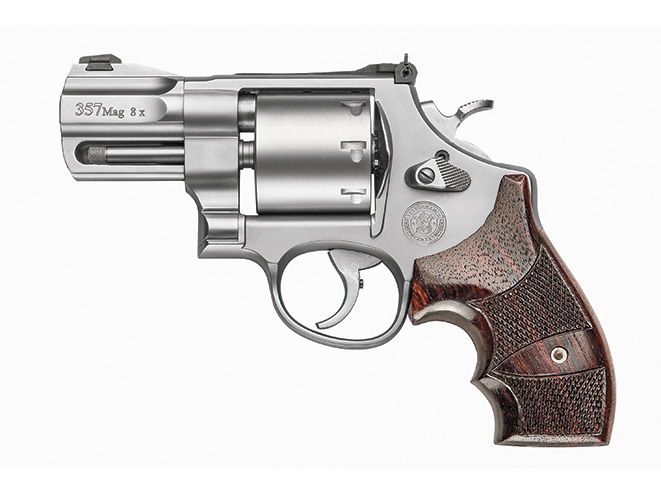 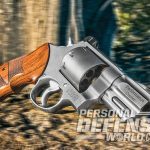 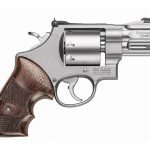 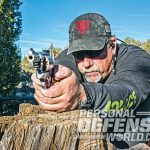 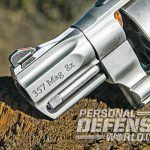 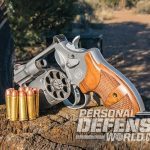 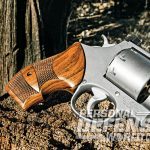 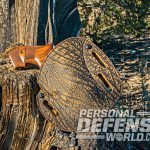 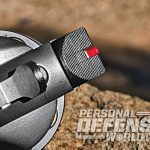 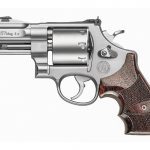 In a world inundated with one plastic pistol after another, it’s easy to forget the revolver remains a very capable self-defense tool. Like any firearm, it has its limitations, but it’s more than viable for many handgun tasks. Revolvers are simple machines that have proven their reliability over more than a century of use. Available in numerous shapes, sizes and calibers, revolvers can still be incredibly versatile.

Revolvers continue to be the first choice for handgun hunters. Guides or those venturing into the backcountry often choose a revolver for its simplicity, reliability and ability to deliver some serious stopping power. Competitors use them in everything from practical matches to long-range silhouette contests. Bucking the opinions of today’s pistol fashionistas, many shooter still use revolvers for home defense and concealed carry. A recent media event provided the chance for me to revisit one of my favorite revolvers, the eight-shot Smith & Wesson Performance Center Model 627 revolver.

My friend and colleague Dick Williams invited me to a training opportunity at Gunsite Academy in Paulden, Arizona. A small group of writers would meet to test out a version of the “one gun” premise. The idea is that you bring only one handgun and one rifle, those you would choose if they were all you had.

Rather than leap into some fantasy about any coming apocalypse or environmental disaster, I focused on versatility for my choices. What handgun would provide the most versatility given numerous tasks, including self-defense and food gathering? I wanted something that would be easy to maintain, simple to operate and remain operable under pretty much any condition. For me, that was the eight-shot Smith & Wesson TRR8 .357 Magnum Revolver. Equipped with a light and a top rail, it could be used for just about anything. A proven hunter, the .357 Magnum can reach out to some serious distances, especially when paired with a scope.

Having taken the TRR8 .357 Magnum to a Gunsite Combat Revolver class, I still had it and used it for the media event. But I had another thought: Given the ability to have a second handgun, what would it be? In keeping with the theme, I decided to acquire a snub-nose Smith & Wesson Model 627 eight-shot revolver. Matching the N-Framed TRR8 meant my moon clips could be interchanged along with my ammunition. It seemed the perfect carry companion to the larger revolver.

Built by Smith & Wesson’s Performance Center, the 2.5-inch-barreled Model 627 is designed for serious use. Each is hand fit with incredible attention to detail. Featuring the larger N-Frame, it fits my hands better than the smaller revolvers. Using a smooth cylinder, the Model 627 carries eight rounds of either .38 Special or .357 Magnum. Recessed for moon clips, it also accommodates single loading or conventional speedloader use.

Smith & Wesson’s Performance center adds a chrome-finished tear-drop hammer and trigger. The tuned trigger is smooth with a lighter double-action pull and a crisp, clean single-action break. A ball detent lockup is also installed, along with a complete Performance Center action tune. The gun’s factory sights consist of dovetailed red ramp up front and a white-outlined adjustable rear. The grips on my test gun were a fine hardwood, in this case a gorgeous checkered brown with a rounded bottom for concealed carry. The Performance Center Model 627 is shipped in a blue hard case with a lock and a few moon clips.

Since the idea was to make this a primary carry revolver, I turned to Simply Rugged Holsters. This company makes some of the finest leather holsters you can acquire. While it builds them for most any pistol, it also caters to revolver users, which is rare these days. Owner Rob Leahy stays true to the company’s name by building simple holsters designed for hard use, not display. Many outdoorsman, guides and hunters head straight to Simply Rugged for the company’s rigs. My pancake holster was covered in gorgeous Cape buffalo hide with speedloader pouches to match. It was a perfect match to the stocks on this revolver. Rob’s Sourdough Pancake is designed to be used either inside or outside the waistband using a pair of straps. You can even add a harness and turn it into a chest rig.

All of the testing was completed using various moonclips remaining from my initial test of the Smith & Wesson TRR8 several years ago. A slow recovery from a hand injury required a new device I picked up from Dillon Precision, the CCW Moon Clip Loading/Unloading Tool. It made the process pretty painless when using the factory steel clips. The device allows you to remove and install unlike other devices, although the company’s Demooner tool is still pretty slick for depopulating the moon clip.

Never all that fond of the factory blade-style sight, I turned to Dave Lauck of D&L Sports. As a longtime custom builder, Dave does some incredible work. Long before the advent of CNC-machining, he was building things by hand on his lathe and mill. Always looking to make things stronger and more practical, he developed a combat rear sight for Smith & Wesson revolvers. It integrates a square-notched fixed carry sight void of sharp edges. It is perfect for concealed carry and mounts securely using the factory holes on the gun’s topstrap. The larger notch makes for fast sight pictures while the serrations reduce glare.

Revolvers are inherently accurate given their fixed barrels and lack of moving parts. Most issues with inaccuracy can be attributed to the shooter. Longer barrels tend to be easier to shoot well, but not always. I completed the police academy using a revolver (a Colt Python) and carried a Smith & Wesson Model 686 my first two years on the job. We shot back to 50 yards in those days, and 50-yard shots into 3 inches or so was the norm for me, especially in single action.

Learning how to “stage” the cylinder into that single-action mode without touching the hammer required training. Smith & Wesson’s smooth trigger made that pretty easy. After a few rounds, it was possible to do so consistently, so all accuracy testing was performed this way. My best group at 25 yards was achieved using Hornady’s .38 Special 125-grain XTPs, and it measured 1.7 inches. Every group using the .38 Special loads measured under 2 inches. The best I could do using the .357 Magnum loads was 2 inches using some of DoubleTap Ammunition’s 125-grain Bonded Defense loads. While stout and requiring concentration, these loads proved very accurate and controllable.

Initial testing at my home range consisted mostly of drills designed to regain my revolver skills. It takes a few rounds to not only adjust my grip, but the need for a longer trigger pull. Proper grip and hand placement is critical with a revolver as gas exits where the cylinder meets the forcing cone. Fingers extended too far can be seriously injured. I also revert back to a “thumbs over” grip when shooting revolvers, especially those using carry grips. It provides a strong grip while keeping your thumbs safe from the cylinder at the same time.

Once dialed in, the Model 627 was very accurate with a smooth double-action trigger pull. By the end of the day, using the .38 Special loads, I was staying inside 6 inches during rapid fire whether on the move or stationary. Shooting this revolver with any of the .38 Special loads was just downright comfortable and very fast. The same level of accuracy using the .357 loads was possible it just took a bit more concentration. The most accurate load used during this portion was Doubletap’s 125-grain Controlled Expansion +P round. At 1,150 fps, it was plenty strong, pleasant to shoot and very accurate. It was the load I carried most of the time during my evaluation.

During the course of the “one gun” event, I was able to spend the better part of the day shooting this pistol at Gunsite. With instructors barking out instructions, it was possible to concentrate on the revolver and my skill level and it worked rather well. Early passes out to 15 yards were very accurate.

The Model 627 was very fast to reload, especially with moon clips. Admittedly, they were kind of a pain to set up initially, but using a couple of holders from North Mountain, it was fast. At no time did I feel handicapped. In fact, on several occasions, I was back in the fight faster then some of the semi-autos. My preference for speedloaders remains for everyday carry, and you can actually get those now for the Model 627. That will be one of the first things on the agenda when the chance to use this revolver comes back around.

Loading moon or “C” clips takes some time, so get that all prepped before you head out to a class. While not an issue on the home range, it became one at Gunsite. Dillon’s moon clip tool worked pretty well, but that last round was often tight. Two or three were bent during the loading process. You need to be careful to make sure it is in the rim or they will just not load in the pistol. Test them in your revolver prior to heading to the class. I found myself performing second reloads on occasion. Dillon’s stainless steel clips look to be the ticket, and I will use them next time, along with the now available speedloaders from 5 Star Firearms.

Carrying this revolver was downright comfortable, only confirming how critical a good holster is. It was carried for a couple months as a primary pistol in addition to my trip to Gunsite. Concealment was possible with just a sweatshirt, but was even better with a coat. With eight rounds in the revolver, and 16 more on my hip, I was anything but under-gunned for most concealed-carry situations. I also carried the gun in a Galco Alaskan holster on a couple of hikes into the snow-covered hills behind the range. Testing some packs for longer backcountry events, the holster kept plenty of firepower very handy and did not interfere with the comfort of the pack.

The D&L Sports carry rear sight was a huge improvement. The factory blade is thin with a pretty small notch. Dave’s rear sight makes it much easier to find the target. Line up the top of the front sight with the rear and you can get some serious accuracy. It allowed for a smooth draw from a jacket or the sweatshirt with no snagging.

If you decide to carry a revolver, know that it does take some effort. They may be simple but not always easy to use, especially in this day and age of the 9mm semi-automatic. So, if you do, take the time to prepare properly. Given proper preparation and training, you will be just as well prepared as anyone for most anything you may encounter in the real world. Mate the Smith & Wesson Performance Center Model 627 to the TRR8 and you can do just about anything ever required of a pistol. 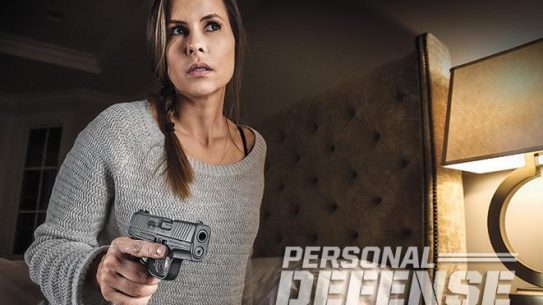