An Uzi For U: IWI’s Compact Uzi Pro Pistol

by Jorge Amselle
in Guns
0

IWI’s new Uzi Pro Pistol offers over 20 rounds of 9mm firepower in a optics-ready package. Shown with a MEPRO 21 sight and an Insight M6 light/laser.

It was 1985 when Chuck Norris, fresh from rescuing American POWs still held by the Viet Cong, returned to America only to have Florida invaded by terrorists in the middle of his much-needed vacation. I may be getting news reports mixed up with the film Invasion USA, but in either case the solution was two full-auto, 9mm Micro Uzis in a custom-made DeSantis shoulder harness. That was my first introduction to this miniscule Uzi, and I had to have one, or two, just in case.

The civilian version of the Micro Uzi was called the Uzi Pistol, and it was identical minus the folding stock and the full-auto capability. That original Uzi Pistol was produced from 1984 to 1993. In 2010 Israel Weapon Industries (IWI) introduced the latest version of the Micro Uzi, the Uzi Pro, for military and police units. Now the civilian version is finally available. Meet the Uzi Pro Pistol. 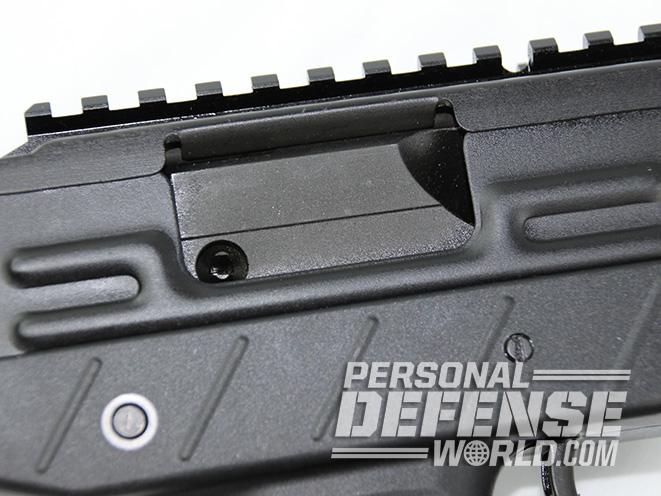 Uzi is a rarefied name among gun owners for good reason and because of its distinct history. At the time of the creation of Israel and the War for Independence in 1948, Jewish settlers and troops were armed with a hodgepodge of weaponry scavenged from the remains of war-torn European arsenals. Following the war, the need for a domestic arms industry became obvious. The resulting 9mm Uzi submachine gun was the brainchild of Major Uziel Gal, and the platform was first issued to the Israeli Defense Forces in 1954.

This stamped-sheet-metal, easy-to-produce, open-bolt 9mm submachine gun was durable, reliable and effective, as well as a battle-proven success in several subsequent altercations. It is also quite possibly the most popular and common submachine gun ever made. Of course, success breeds innovation as well, and soon special operations units were demanding something smaller, thus the Mini Uzi, and after that something even smaller, thus the Micro Uzi.

The lower receiver is now made from polymer to reduce the weight and increase durability, corrosion resistance and strength. It also extends the full length of the upper receiver. There are nearly 2.5 inches of Picatinny rail attached to the lower receiver just in front of the triggerguard for easy installation of tactical light and laser systems. This rail section extends underneath the barrel to almost the front of the barrel.

The grip had been redesigned with a much more ergonomic and less boxy appearance, and it features grooves at the front and rear along with a front lip at the bottom for a more secure hold. The magazine well is also flared for easier and faster mag changes. Another more American (and less European) change is the placement of the magazine release. In the old Uzi Pistol, it was located at the bottom of the grip, but on the new pistol it has been placed at the rear of the triggerguard where American shooters are more accustomed to finding it. The polymer triggerguard is now also integral to the lower receiver.

There are three separate safeties on the Uzi Pro Pistol. The grip safety located at the rear of the grip is made from polymer, and it has been redesigned with a rounded and pronounced shape to offer a better and more secure positive engagement. The manual safety has been relocated upwards from the grip area, just behind the trigger, to the upper receiver. It, however, functions the same way as a sliding tab that is moved back for “safe” and forward for “fire.” Finally, the Uzi Pro Pistol features an internal firing-pin-block safety, which blocks the firing pin from going forward unless the trigger is depressed. 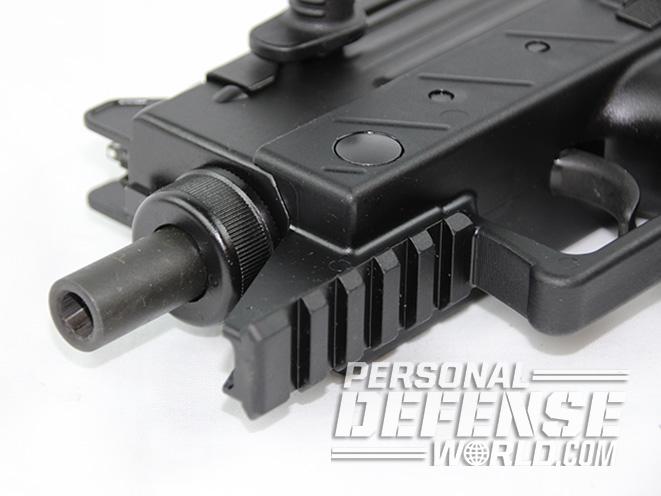 The stamped steel upper receiver is the serialized portion of the pistol and also bears some very distinct design element changes from the previous model. Most notable is that the polymer, non-reciprocating charging handle has been moved from the top of the receiver to the left side. This doesn’t make it any less ambidextrous, it just means that lefties have to come over the pistol a bit further or angle it to the right to operate. At the rear of the charging handle rod there is a small red tab that appears to show that the pistol is in battery and the chamber fully closed.

The main advantages are that the charging handle is now somewhat larger (since it does not interfere with the sights) easier to operate and allows for 5 inches of top-mounted Picatinny rail. This rail allows for the easy installation of miniature reflex sights for faster target acquisitions.

Maintenance and disassembly for the Uzi Pro Pistol is easy and straightforward. First remove the magazine and, while pointing it in a safe direction, ensure that the chamber is empty. Note that the bolt will not retract if the safety is on and the sear is in the forward (fired) position. Unscrew the barrel lug by depressing the barrel lug release tab and then the lug and barrel can be easily removed. Depress the receiver cover tab at the front of the rear sight to remove the cover, and then the charging handle and bolt assembly can be removed. Finally, separate the upper and lower receivers by pushing out the two takedown pins at the front and rear of the lower receiver. Assembly is in the reverse order. All of this can be done easily without any tools. 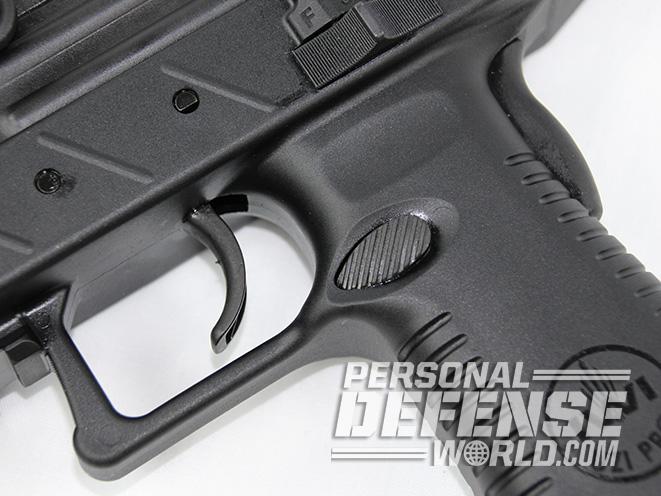 It should also be noted that the Uzi Pro Pistol operates as a blowback gun, so the weight of the bolt is all that keeps the action shut until chamber pressures drop to a safe level. As such, you have a fairly heavy bolt which makes up a large portion of this pistol’s 58.5 ounces. This weight, however, is balanced directly over the hand so the pistol feels neither front- nor rear-heavy, but well balanced.

The single-stage trigger has a slight amount of take-up and measures at 13 to 14 pounds. The grip safety positively engages as long as you maintain a firm grip and the manual safety is easy to deactivate with the thumb of the shooting hand (for right-handed shooters at least) but I found I needed to use my support hand to re-engage it.

At the rear of the receiver there is an end cap, which would have been an ideal location for installing a sling attachment point, but none is present. This end cap is removable and the operator can install a folding stock (if the pistol is NFA registered) or a folding stabilizing arm brace produced for IWI U.S. by SB Tactical, the company that designed the original arm braces used by Sig Sauer and other manufacturers. I did not get the opportunity to test the Uzi Pro Pistol with this arm brace, but previous experience with other systems indicate that this would be a welcome addition and help increase control, balance and accuracy with this pistol. It is an addition well worth considering.

Getting My Uzi On

On the range, the Uzi Pro Pistol performed right out of the box with zero maintenance and zero malfunctions of any sort, despite using a mix of ammunition. This was expected given the gun’s battle-proven, reliable design and blowback operation. The weight of the pistol kept recoil at an absolute minimum and fast follow-up shots on target were easily accomplished.

This is not a bullseye target pistol, and unless you are Chuck Norris, it is not a concealed-carry pistol either. The Uzi Pro Pistol is based on a dedicated special operation select-fire submachine gun and bears many of those same hallmarks. It will appeal primarily to Uzi fans and military/history buffs. But still, in its civilian configuration, it can make for an excellent home-defense or trunk gun, and it comes with a flush-fitting 20-round magazine and a slightly longer 25-round steel mag. A 32-round magazine is also available.