Springfield’s latest XD-S comes chambered for the hard-hitting .40 S&W, giving shooters another top-notch option for self-defense. The XD-S comes with a Picatinny rail for accessories like the LaserMax Spartan green laser (shown).

New from Springfield for 2016 is the popular XD-S pistol in .40. Whether for law enforcement use as a backup or for concealed carry, .40 S&W has become the first choice of law enforcement agencies across the nation. This hard-hitting caliber, with its higher velocity and slightly lighter but snappier recoil than the .45 ACP, suits the Springfield XD-S perfectly, requiring nothing more than a new barrel and magazine combination to up the subcompact pocket pistol to a 6+1 standard capacity in .40 S&W.

As with previous XD-S semi-autos, the .40 S&W shares the same dual external safety mechanisms: Springfield’s blade-style Ultra Safety Assurance (USA) trigger mechanism and a secondary grip safety. Both must be engaged in order for the XD-S to discharge, thus the dual safety operation unique to the XD line makes this a more secure sidearm to handle in the field. Another advantage is that the Springfield’s ambidextrous magazine release design does not employ a disconnector, allowing the XD-S to discharge a chambered round with the magazine removed. 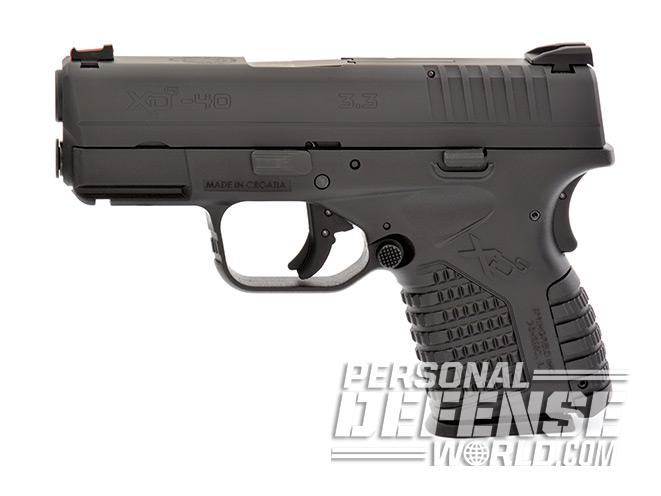 While the Springfield XD-S .45 ACP maintains a reasonable 5+1 standard capacity, the new .40 S&W ups the count to 6+1 with the flat-floorplate magazine and 7+1 with the extended magazine (the gun comes with one of each). The seven-round magazine also increases grip length by 0.78 inches, allowing a full-hand grip for most. Like the .45 ACP and 9mm models, the .40 S&W version has excellent weight and balance in the hand, and it offers reduced felt recoil thanks to Springfield’s specialized recoil spring and plunger design. Muzzle lift is less than one might expect from such a comparatively lightweight (21 ounce), polymer-framed handgun, making the .40 S&W more manageable and quicker to get back on target than many larger subcompacts. The use of a combat-style white-dot rear sight and a red fiber-optic front sight also makes this gun very quick to point under a wider variety of lighting situations.

The XD-S is a striker-fired design that Springfield has fine-tuned to reduce trigger take-up and provide a short reset. Including engaging the blade trigger safety, there is about 0.5 inches of travel, and the trigger pull remains crisp and consistent at an average of 8.5 pounds. Slightly heavier than some DAO striker-fired pistols, the XD-S trigger is nevertheless smooth with negligible stacking and zero overtravel. 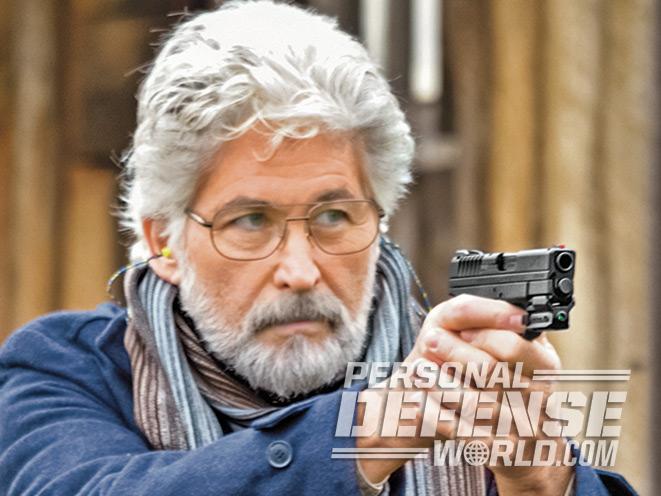 The XD-S line has a proven history of reduced recoil and quick target reacquisition with its refined white-dot and red fiber-optic sight combination. The new .40 S&W version has the exact same feel in the hand, balance and operation as the 9mm and .45 ACP versions, with recoil being less than expected for this robust caliber in a lightweight, polymer-framed subcompact. To evaluate the new model, the ammunition choices were Hornady’s American Gunner 180-grain XTP hollow points, Federal Premium’s 180-grain Hydra-Shok JHP and Speer’s 180-grain GDHP hollow points.

Velocity readings for all three was in the low 900-fps range, with Hornady clocking 940 fps, Federal 932 fps and Speer clearing the ProChrono chronograph’s traps at 910 fps. The target was a standard B-27 silhouette target placed out at a measured distance of 15 yards. Ambient temperature was 36 degrees. Colder temperatures can affect velocity. As for accuracy, the XD-S in 9mm and .45 ACP has returned excellent results in multiple tests over the last few years, and the 40 S&W was no different, delivering 10- and X-ring groups measuring an average of 1.75 inches.

Overall, this is the same proven Springfield XD-S chambered in the most popular law enforcement caliber in use today. As a CCW choice or a backup to a full-sized service pistol, one would be hard pressed to do better.