by Sara Ahrens
in Guns, Handguns
0

Way back in January of 2015, Remington introduced some of its latest firearms. It wasn’t surprising to see new long guns in the company’s lineup since, after all, my very first personally purchased firearm was a Remington 870. I was surprised by Remington’s other endeavors, such as the company’s suppressor line, consumer education programs, female-specific programs and the introduction of Remington’s first micro handgun, the RM380 in .380 ACP.

I had the opportunity to test-fire prototypes of the RM380 and was immediately smitten with the firearm. I adore small firearms that I can easily conceal, shoot well, shoot comfortably and that fit my grip without forcing me to make adjustments. The RM380 met each of these criteria for me.

While at a Remington event held at Gunsite Academy in Arizona, I spoke with one of the engineers who worked on the RM380 project, Zachary Wells. He explained, “The RM380 started its life as the Rohrbaugh. This platform was chosen as a starting point because it was well-liked and functioned well.”

From there, the team’s goal was to reduce the price of the firearm to make it affordable while simultaneously making performance and reliability improvements. Another goal was to add additional features. Wells further explained that “redesigning the internal components for modern manufacturing methods” helped to reduce costs. The team that worked on the RM380 conducted extensive testing, analysis and design modifications that improved the function and reliability of the firearm.

The RM380 received a handful of new features, such as the addition of the slide stop lever and an ambidextrous magazine release. Wells said Remington felt this was necessary to make it easier to safely load and unload/clear the firearm. Other additions included checkering on the grips and frontstrap, undercutting the triggerguard and adding a small beavertail to improve the pistol’s ergonomics and grip surfaces.

Another modification incorporated into the RM380 was the replacement of the recoil system with a new, simpler design. This newer design makes charging the slide/manipulating the firearm easier and will, according to Wells, “last the life of the firearm, maintenance-free.” Wells further added that although the individual features may not stand out individually from features offered by some competitors, the end result is a small, reliable firearm that shoots softly, accurately and consistently.

He credits the success of this firearm to the cohesive, creative and synergistic team that worked on the RM380. At this event, one thing that stood out to me (not as a writer, but as a consumer) was the company culture and responsiveness of every Remington employee. They were patient, explained why certain decisions were made and listened to feedback.

It was clear that they are responsive to their consumers. Anyone who has ever experienced poor customer service
understands the importance of a responsive and reputable company. My interaction with Remington made a lasting, positive impression.

Initially, I fired a prototype of the RM380 in January of 2015. I shot a couple hundred rounds in an arid and dusty range without any stoppages. When I received the RM380 later in the year, I test fired the firearm again in an indoor range.

I tested the RM380 from a distance of 7 yards, which is about the maximum distance I would use a .380 in a self-defense situation. I fired 400 rounds of factory ammunition and didn’t experience any malfunctions. I found the recoil of all three of rounds tested to be very manageable. Despite the 10-pound, double-action-only (DAO) trigger, I was able to fire quicker than one might suspect.

I was also able to easily reload the firearm. Smaller firearms can be challenging to reload sometimes because of access to the magazine well. The magazine I was provided had an extended baseplate, which offers more of a grip and can assist in removing a jammed magazine or a magazine stuck under spring pressure, such as when there’s a Type II malfunction (double feed). 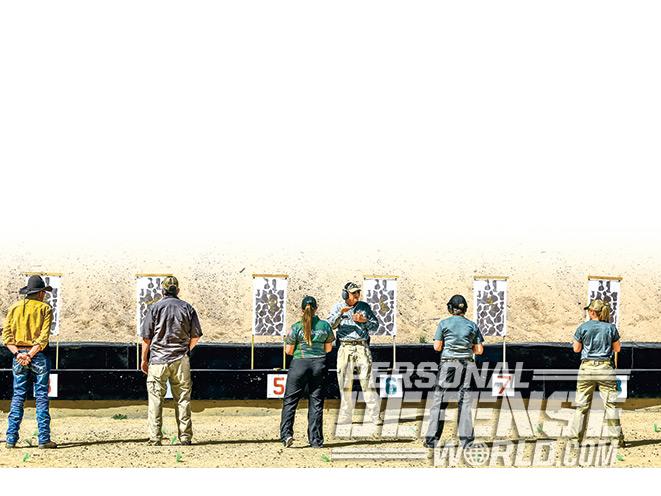 The RM380 has an ambidextrous magazine release, which is a helpful characteristic for shooters with short fingers. I rarely purchase a handgun that doesn’t incorporate this feature, but in all honesty, for me, this gun is sized appropriately for my hand. I am able to release the magazine on the strong side without having to reposition the firearm to reach the magazine release, but this feature will be beneficial for shooters with very short fingers or left-handers.

The RM380 has a long yet smooth double-action trigger pull. There is no discernable overtravel after breaking the shot. The take-up on the front end of the trigger pull is minimal.

My range experience with the RM380 was very positive. Shooting on an indoor range, I did experience some difficulty acquiring the low-profile, black, fixed front sight. This is an easy fix with a dab of luminous hobby paint, or, as I was taught in the Army, some white-out. I want to point out that this is a semi-auto .380 ACP pistol, and at the distances that it should be shot, one could ague that sights are unnecessary. Even with some difficulty acquiring the front sight while shooting the RM380 in a dimly lit indoor range, with my target (hung from a pulley system) swinging back and forth with the draft created by the exhaust fan, I still shot some impressive groups. My best result was courtesy of Hornady’s 90-grain FTX load, which produced my best group size of 0.8 inches. 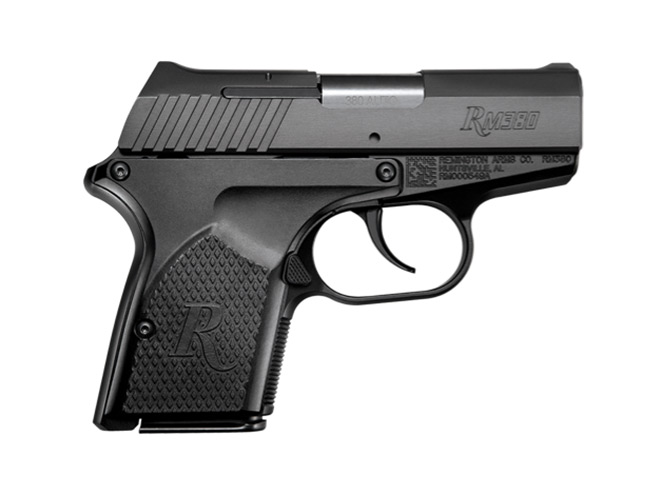 The takedown procedure for the RM380 is a little different than other firearms I am used to working with. The takedown pin isn’t visible from the exterior of the firearm; it is only visible once a hole on the slide—after being pulled rearward—aligns with the interior takedown pin. You can remove the takedown pin with a punch or by tapping the firearm. It comes out remarkably easy, so be sure to take the RM380 down in an area where the pin can be found if it dislodges before expected. Taking the pistol down for maintenance is easily accomplished.

From the first time I shot the RM380, I was in love with this firearm and decided I would purchase it someday. Luckily for me, I didn’t have to! At the 2015 NRA Annual Meeting & Exhibits in Nashville, Tennessee, I actually won one! Given the fact that the first gun I ever purchased was a Remington, I couldn’t be happier that the first gun I won was also a Remington. It literally is my prized pistol.