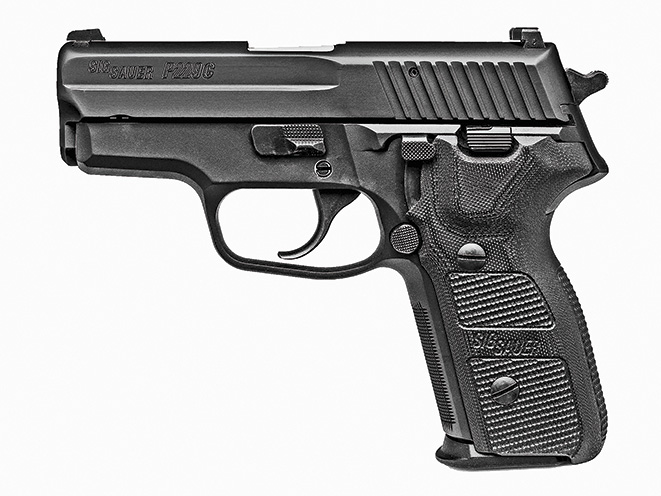 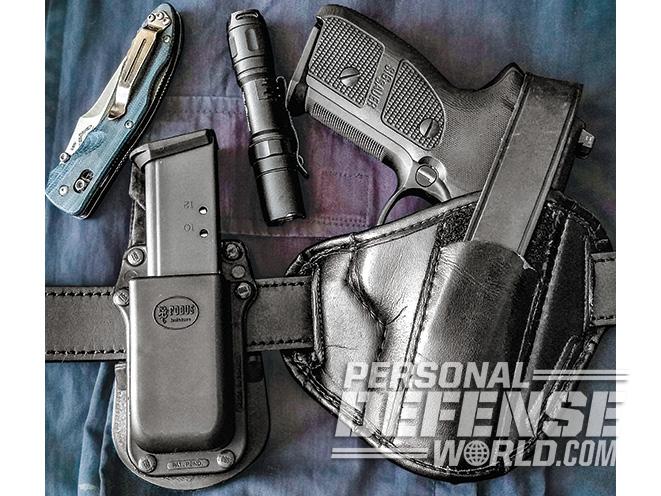 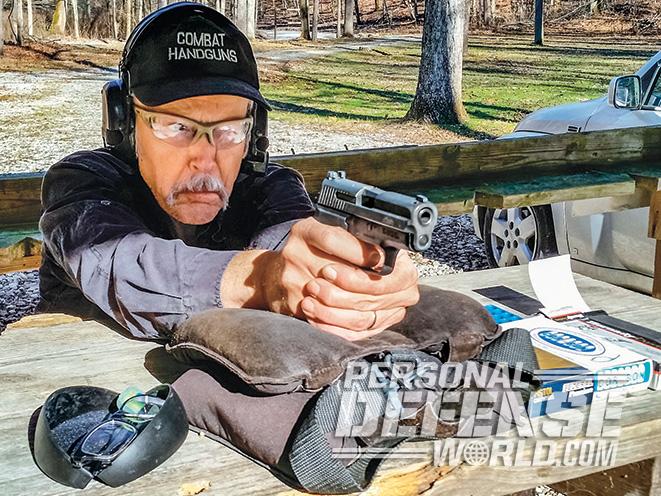 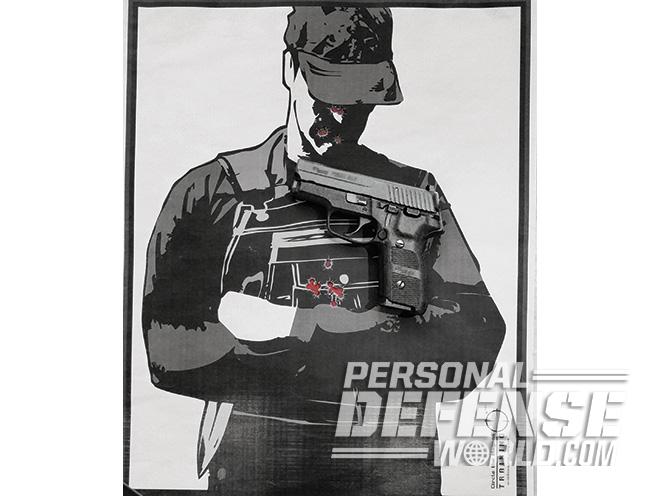 4 of 10
Sig Sauer P229C SAS
The author tested the pistol with a CNS target. 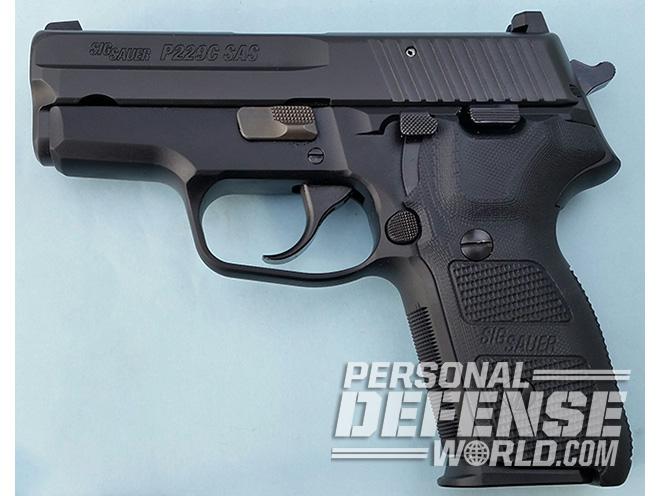 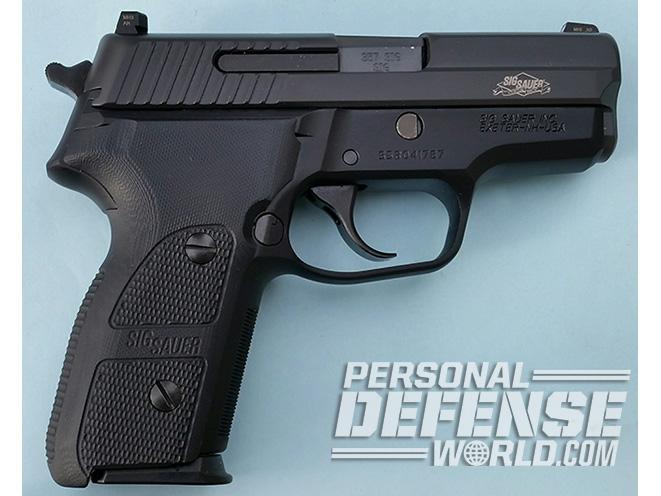 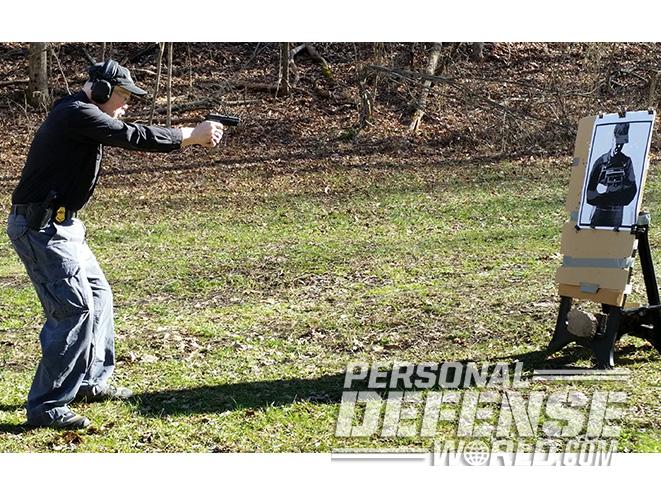 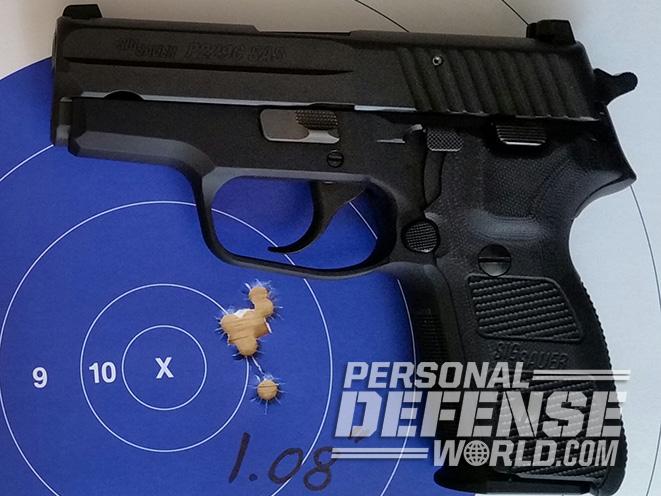 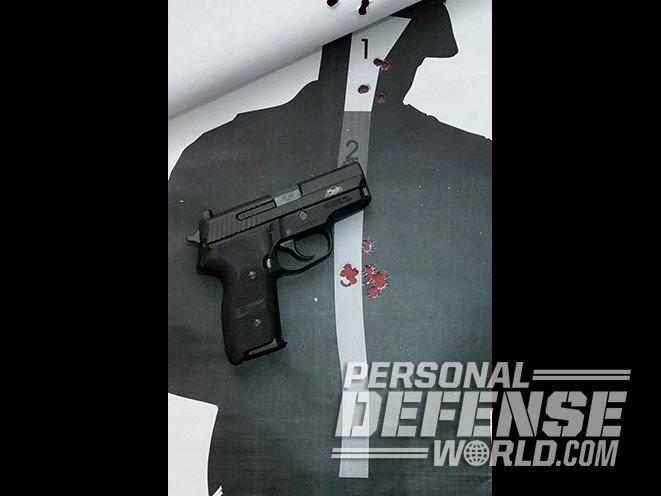 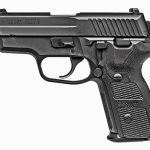 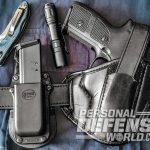 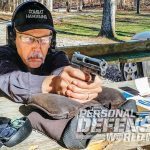 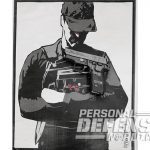 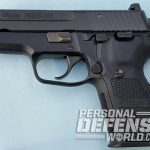 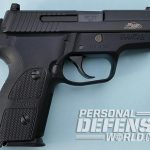 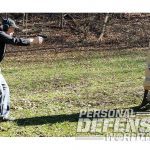 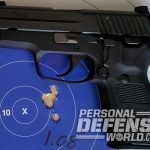 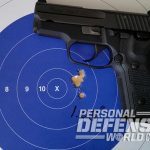 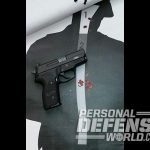 The Sig Sauer P229 has been one of Sig’s most popular models for a number of years, and not only does it have a big following in law enforcement, but also with legally armed citizens who are looking for “top drawer” ordnance for self-defense use. Now the Sig Sauer Custom Shop has taken the P229 and shortened the barrel length from 3.9 to 3.5 inches, resulting in a pistol with an overall length of 6.7 inches, which translates into a pistol that’s more compact and easier to draw from a holster.

The basic P229 frame has been retained in the variant, which allows the use of standard P229 magazines, so there is no reduction in cartridge capacity. This new P229C SAS is available in .357 SIG and .40 S&W calibers. Soon an X-Change system will allow it to be converted to 9mm. With a standard magazine, you get 12+1 rounds of firepower in two very effective chamberings.

A very noticeable feature of the P229C SAS is the lack of an accessory rail on the dust cover, a concession to concealability. Note also that the pistol has been given Sig’s Anti-Snag treatment, meaning all the sharp edges have been rounded to help prevent the pistol catching on one’s holster or clothing. The pistol’s G10 grips, with their “alligator skin” checkered panels, are combined with a checkered frontstrap to provide a good gripping surface, dry or wet.

The width of the gun has also been reduced from 1.5 to 1.3 inches due to the thinner grip panels. The whole package has a non-reflective matte-black finish; the slide has been treated with durable Nitron. It comes standard with fixed, low-profile SIGLITE night sights.

A look at the left side of the P229C SAS indicates that it is a traditional double-action/single-action design (DA/SA), which means the first shot is fired DA and the cycling of the slide causes subsequent shots to be fired in SA mode. This hammer-fired pistol has an exposed spur for cocking and a lever situated between the slide release catch and the disassembly latch, which is used to safely lower the cocked hammer. The DA pull I’ll have to guesstimate at about 15 pounds and stacks towards the end of the trigger’s travel. SA pull is 6.5 pounds on average with around 0.25 inches of take-up for safety, plus there’s a touch of creep and overtravel. Another standard Custom Shop feature is the Short Reset Trigger (SRT), which reduces the trigger reset travel by 60 percent.

There are no manual or magazine safeties on the P229C SAS; it has the usual Sig internal safeties that prevent the gun from being fired unless the trigger is intentionally pulled. The magazine catch is checkered, located to the rear of the triggerguard and easily operated by the user’s thumb. Another difference between the standard P229 and this version is the lack of a “hook” on the front-portion of the triggerguard. The steel magazine is matte finished with witness holes for five, 10 and 12 cartridges. The follower is black polymer, with an easily removal floorplate that fits flush with the bottom of the grip frame.

Slight extensions on the G10 grips are beveled in the area of the magazine well to assist in faster insertion. Basic disassembly for cleaning is simple and enumerated in the owner’s manual. Fit and finish on my test gun was up to the usual top-drawer level one expects on Sig Sauer pistols. Each pistol comes in a black plastic case, with a compartmented foam liner, an extra magazine, a safety padlock, a manual and a sample of Lucas Oil Extreme Duty gun lubricant.

The SIG P229C SAS I requested to test is chambered for the .357 SIG cartridge. This powerful round almost duplicates .357 Mag performance in loadings with similar bullet weights, and in this model it gives you 13 rounds instead of the typical six or eight in a revolver. For my evaluation, I selected .357 SIG ammunition from CorBon with a 115-grain JHP bullet, a Federal Premium load with a 125-grain JHP and a Hornady Custom load with a 147-grain XTP HP bullet. All of these bullets are traditional hollow points with serrated jackets extending to the tip of the hollow nose.

I set up bullseye targets at a distance of 15 yards and fired three 5-shot groups with each brand of the test ammunition. At 31 ounces loaded, the compact pistol had noticeable recoil and muzzle flip, but the sights were easy to see and I was pleased with the accuracy level. My best group measured 1.08 inches with the Federal cartridges. Second place went to the CorBon load with a 1.89-inch cluster. The overall average for all three of the .357 SIG loads out of the P229C SAS was just 2.39 inches and point of aim/point of impact were well regulated.

This being a new version of the P229, there was no specific holster I could locate for it (yet), so I chose my Uncle Mike’s Super Belt Slide. This comfortable and versatile rig has an adjustable thumb-break safety strap that can be lengthened or shortened in the protective Strap Traps using a factory-furnished tool. The holster is made of black Kodra nylon or Mirage nylon (like mine) that looks like fine leather but is more durable. The extra-thin laminate conforms with body contours, providing a flattened profile for superb concealment. With its “pancake” design and triple belt-slots, it will adapt to fit almost any medium-sized autoloader I’ve tried in it. I paired the holster with an open-top Fobus single magazine carrier that is fashioned from sturdy Kydex and has a paddle back for easy on/off applications.

With holster and magazine carrier affixed onto my belt, I loaded my Sig P229C SAS magazines with a mix of the .357 SIG test cartridges, six rounds in each. Why six rounds you ask? I decided that for the SIG P229C SAS practical shooting evaluation I was going to use a new target system I’d been introduced to recently called the CNS-OSS Target Kit. It was developed by Circle the Wagons Training in Scottsdale, Arizona. Owner and Director Jay Wurts runs this self-protection training school, but realized that not everyone could attend a “personal instruction” defensive shooting course. As a certified NRA firearms instructor with a military background, Jay Wurts wanted to find a way to teach CNS (central nervous system) defensive targeting to enable the fabled “one-shot stop” (OSS).

Wurt’s CNS-OSS instruction kit comes with three realistic threat targets and three CNS targets. The threat target is mated with the CNS target; one atop the other so that after the shooting drill the user can see if his/her shots directed at the threat target actually hit inside the three CNS zones for incapacitation.

For my SIG P229C SAS practical evaluation, I chose the “Knife Threat Target” and performed a modified version of Drill 1. This simulates a knife-armed attacker approaching head-on in a stealthy manner. I had the Threat target and CNS target stapled one atop the other and I placed it 3 yards downrange. I made some verbal commands to my “bad guy,” then drew my SIG pistol and fired six rounds—two were fired at the face/neck (Zone 1) and the rest to the thoracic area (Zones 2 and 3). I then moved to 6 yards and fired six more rounds in the same manner.

Returning to the 3 yard line, I drew and fired a series of three double-taps, starting each string from the holster. The instructions have the shooter firing at the CNS target uncovered at times, but I shot the entire 18 rounds with the Threat target covering the CNS target. I ended up with four of six shots in Zone 1 and just five of 12 in Zone 3. So half my shots were inside incapacitating zones.

I found the P229C SAS was easy to control in rapid fire. This was primarily due to the excellent ergonomics of the grip frame, the G10 grips and the frontstrap checkering. I had zero malfunctions all day and did not experience the DA-to-SA transition problem some shooters gripe about. The gun’s magazines dropped free when ejected and the white “dot” surrounding the tritium capsule in the SIGLITE sights made sight acquisition a snap.

The only thing I had to consciously watch was holstering before I lowered the hammer. This does take some practice to build habit and muscle memory. That’s one good reason for a bit of a stiff trigger pull, to help prevent the user shooting his/her leg while inadvertently holstering a cocked pistol. I encountered no difficulty in drawing the pistol from or replacing it in the Uncle Mike’s holster. On the whole, I found the performance level of the Sig Sauer P229C SAS outstanding. 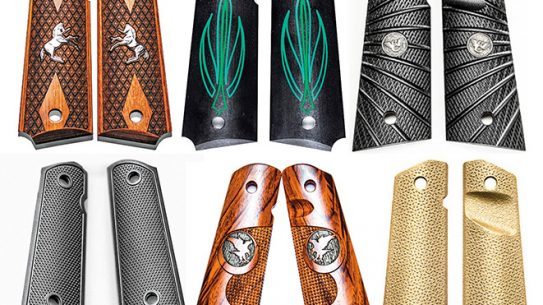 20 Aftermarket Grip Panels For Your 1911 Pistol

Get slab happy with this complete guide to aftermarket grip panels that suit your...