"... the Eclipse Ultra II (LG) is the smallest of the group with a 3-inch barrel and a shortened grip frame."

I have lost count of the number of times I have heard a fellow shooter say, “The 1911 pistol is the perfect handgun just the way John Moses Browning invented it!” But according to Webster, the definition of perfection is “something that cannot be improved.” Well, while I will no doubt anger many of its aficionados, I must state the obvious: The 1911 pistol is not perfect.

This is because the 1911 pistol is a man-made machine. A bullet-shooting machine to be sure, but a machine nonetheless. And any machine can and most likely will malfunction at one time or another. Ever since the first machines were invented, humans have been trying to make them as reliable as possible. And with his 1911 pistol, Browning succeeded to a greater degree than any of his contemporaries and many of the gun designers who came after him.

But while the service-type 1911 was known for its ability to function under some horrendous conditions, the loose tolerances that made it reliable kept accuracy from being one of its strong points. While this was not a problem in combat, it was for serious target shooters. The result was that more and more custom gunsmiths began “tweaking” the pistol to see if they could coax more accuracy from it without decreasing its overall reliability.

Today there are any number of companies producing 1911s that range from plain G.I.-style pistols to so-called “race guns.” One company whose 1911s have become known for reliability and accuracy, as well as looking darn good in the process, is Kimber.

Three Of A Kind

Kimber entered the 1911 market in the mid-1990s, and over the years its product line has expanded to where the company now offers a complete line of high-end, single-stack 1911 pistols that have every feature demanded by today’s serious defensive and competitive shooters. All the customer has to do is take them out of the box, load the magazines and they’re ready to go.

All three pistols feature stainless steel slides with polished sides and black-finished tops that reduce glare during sighting. The Custom II’s slide has grasping grooves on the front and rear, while the Pro II and Ultra II have a single set on the rear of their slides. All are sharply cut, allowing a firm grasp, even with wet of oily hands. To ensure that spent cases get out of the way quickly, all three pistols’ ejection ports are lowered and flared.

Dovetail cuts in their slides contain Meprolight tritium three-dot night sights, which can be adjusted for windage. The Ultra II and Pro II models are fitted with bushingless barrels. Custom IIs have traditional muzzle bushings to position their barrels. All three have full-length recoil spring guide rods for improved reliability and consistent lock-up, which improves accuracy.

As with the top ends, the stainless steel frames have polished sides while their undersurfaces sport a black finish. This contrasting appearance is very attractive and really sets these pistols apart from similar designs. Ergonomics, handling and recoil control all get a boost from beavertail grip safeties, checkered frontstraps and mainspring housings, and all three pistols have metal relieved under the triggerguard for a high, secure purchase.

Other controls include moderately extended, single-sided thumb safeties and skeletonized triggers and hammers. The slide-stop levers and magazine releases are all normally sized, which is just how I like them. Lastly, the magazine wells have been beveled, so shooters can expect to perform fumble-free reloads. For tests I used two 7-round magazines, one with an extended baseplate (KimPro Tac mag) and the other with a flush baseplate.

The most unique feature of this trio of Kimbers is that they come standard with checkered Slatewood Crimson Trace Lasergrips, which feature an integral laser sight in the top of the right grip panel. A pair of batteries in the grip panels supply power while the on/off switch is located in the bottom of the left panel. Finger pressure on the rubber-encased activation pad on the Lasergrips’ frontstrap activates the laser.

Mounting a laser sight on a handgun allows rapid target acquisition, especially in low-light conditions. A shooter can also engage targets from behind cover without exposing too much of themselves. Another advantage is that you can fire accurately without having to bring the pistol to eye level, which could be very useful if you are in an awkward position, must fire one-handed or if one of your hands/arms has been disabled. Finally, “painting” an attacker with a red or green laser has sometimes been known to have a mollifying effect on aggressive tendencies.

My “right out of the box” impressions of the Ultra II were that it is a nice-feeling pistol, and I was especially taken by the frame checkering and the large, easy-to-see sights. According to my trigger-pull gauge, the trigger broke crisply with a bit over 4 pounds of pressure. 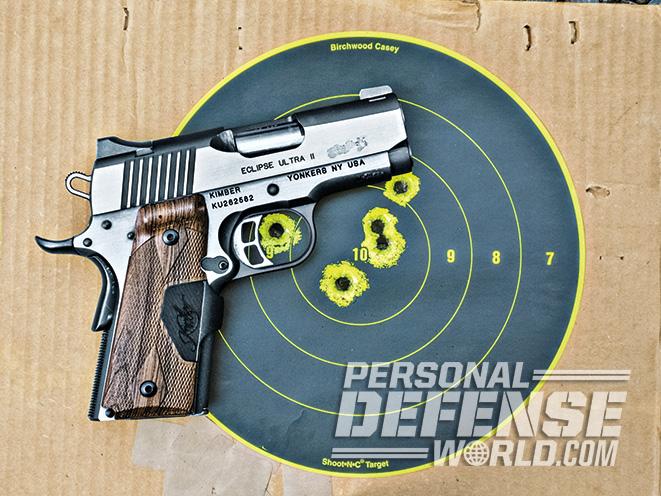 My wife, Becky, and I headed out to the range the next day to see how this attenuated .45 ACP performed. As all gun writers’ standard operation procedure requires that we poke holes in paper at a measured distance, I set up a series of targets at 10 yards and, after sitting down behind my MTM K-Zone rest, proceeded to fire a series of five-shot groups with the Ultra II. I was pleasantly surprised when I produced several sub-2-inch groups. That’s not too bad for a “snubbie” semi-automatic.

As Becky and I dodged intermittent rain showers, I belted on a Galco Yaqui Belt Slide holster and ran series of drills on a pair of combat targets set at 5 and 7 yards. The large sights allowed me to acquire and transition between targets quickly, and the crisp trigger allowed me to place my shots accurately. While the checkered grip frame and grip panels provided good recoil control, when using the magazine with the flush baseplate, my little finger kept slipping off under recoil. But with the extended baseplate magazine, I was able to get a full, secure purchase on the pistol, which greatly aided in recoil control without sacrificing concealability.

Out of curiosity, I fired the Eclipse Ultra II with several full-length, eight-round magazines provided by Brownells, and I am pleased to report that the pistol functioned perfectly with them. If I used the Kimber for concealed carry, I would carry these magazines for reloads.

Turning on the Crimson Trace Lasergrips, I proceeded to engage a target at 5 yards, firing the pistol from waist level. Once I got the hang of holding that bouncing little red dot (fairly) still, I fired some 30 rounds that chewed up the center of the target in a most pleasing manner.

While I have never been overly fond of laser sights, these drills with the CT-equipped Kimber have come much closer to convincing me that a pistol with this type of laser setup could be very useful in a close-range defensive situation and would definitely be a wise choice for home defense.

Although Officer-sized 1911s aren’t necessarily my bag, I have to confess that Kimber’s Eclipse Ultra II has softened this attitude to a significant degree. I found it to be concealable, controllable and accurate. So if your idea of the perfect concealed-carry gun is a subcompact 1911, then the Kimber Ultra II should fill your bill.