With its 6+1 capacity and snag-free design the RM380 is ideal for deep-cover carry. Shown with a Crimson Trace Laserguard.

Remington is many things. It is the oldest firearms company to still be operating in America, and it is the biggest producer of rifles and shotguns in America. It is not traditionally known as a handgun company. This is a bit ironic as handgun manufacturing is not an alien concept to Remington, which made derringers and revolvers used during and after the Civil War, including the New Model Army cap-and-ball revolver. Remington also made the semi-automatic Model 51 in the years between World War I and World War II.

In recent years, Remington made a conscious decision to re-enter the handgun market in full force, staring with the 1911 R1. Its latest handgun, however, goes in the opposite direction. Instead of a full-sized .45 ACP, Remington has introduced the RM380, a semi-automatic pocket pistol chambered in .380 ACP with a 6+1 capacity. Although it’s designed to compete with other pocket pistols in this same chambering, the Remington RM380 offers so much more.

This double-action-only, hammer-fired pistol features tilt-barrel, locked-breech operation and all-metal construction. There’s no polymer here except for the grip panels, which can be removed and replaced. Remington was also very careful not to roll this pistol out until it had been thoroughly vetted. Indeed, the company’s own extensive testing found that the RM380 has a useful, no-repair-needed lifespan that is thousands of rounds past any of its competitors. Every pistol is fired with a full magazine before it leaves the factory and random production guns are put through extensive torture testing.

I shot an early prototype of this pistol, firing over 100 rounds on a gun that many others were also shooting. It was reliable and accurate with one problem: The right side grip panel had loosened with use, and this was causing a trigger linkage blockage, preventing the gun from firing. Remington has addressed this issue in its final production guns by adding a third grip screw, and I tested the production gun again, with hundreds of rounds fired by myself and others, without any further issues whatsoever.

The steel slide features actual sights machined into it. These will not come loose and are very low profile and snag-free. The downside is that replacing the sights will require machining the slide. I would add a dab of white paint to the front sight for improved visibility, but that is just my preference. The slide features an external extractor and wide serrations for easy manipulations even in inclement conditions. The 2.9-inch, 410 stainless steel barrel is blackened like the slide and features an enlarged cone design for a tight lockup between barrel and slide, improving accuracy.

The frame is made from 7075 aluminum, which keeps the pistol very lightweight but also helps extend the gun’s durability and longevity. The frontstrap of the frame features aggressive checkering for a very firm hold, although I would have added checkering to the backstrap as well. The triggerguard is undercut to allow for a higher grip, providing better control of the pistol. The higher grip also brings the bore more in line with the hand, helping to reduce perceived recoil and muzzle flip.

Remington has also optimized the grip angle for improved comfort and a more natural point of aim. The small but distinct beavertail at the back helps prevent “slide bite” and allows for a more instinctive grip. The polymer grip panels are also checkered for an improved grip, and customizable aftermarket grips will also be available.

Another pleasing feature is the slide stop on the left side of the frame. This securely locks the slide to the rear on an empty magazine or manually. It is rather small and difficult to use as a slide release, but not impossible if so desired. Sure to please southpaws, however, will be the fully ambidextrous, push-button, frame-mounted magazine release. The small, triangle-shaped release sits below the thickness of the grip panels so there is no danger of the magazine being inadvertently released, say, during pocket carry. The magazine release is also aggressively checkered, easy to use and allows the steel magazines to drop free.

The steel hammer is bobbed flat with the rear of the slide for a very smooth and snag-free draw. It should be noted that there are no external safeties on the RM380 and there is no internal drop safety either, except for a passive block within the slide. However, according to Remington, the RM380 has been tested using SAAMI Jar-Off, Drop and Rotation test criteria and passed, so it is safe to carry with a live round in the chamber.

There is also a loaded-chamber indicator at the top rear of the barrel that can be seen from the ejection port. That said, this is a double-action-only pistol and the steel trigger has a long pull that measured nearly 10 pounds on my trigger gauge. It also requires a full release to reset, so fire it like you would a revolver. The hammer-fired system also allows for a second-strike capability in case of a recalcitrant primer. 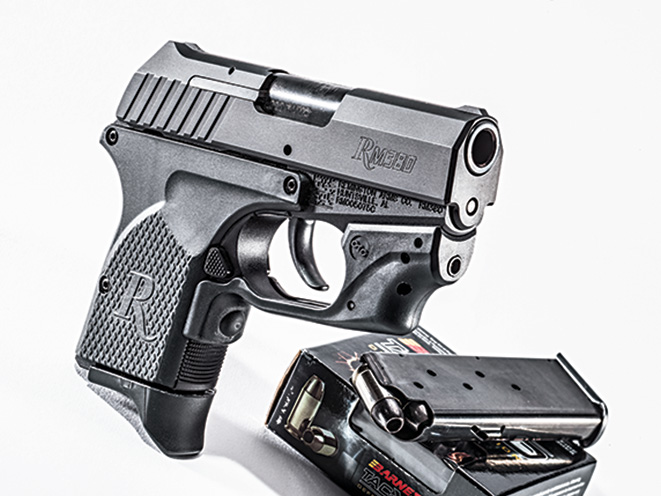 Internally, the RM380 features a dual recoil spring system around a steel recoil guide rod. This system works very well and helps to tame recoil while also making the slide easy to operate, something those with weaker hands will appreciate. The clever dual spring design also extends the need for replacement to 2,500 rounds. Another welcome feature not always seen with pocket pistols is that Remington includes a spare magazine with the gun, and this spare features a good-sized finger extension that allows almost a full grip on the gun.

People who know their guns will notice more than a passing similarity between the RM380 and the Rohrbaugh R9. That is not a coincidence. Remington bought the rights to this pistol and based the RM380 on its design. However, the similarities end there.

Remington made significant changes, most notably the chambering in .380 ACP instead of 9mm. If you look at the top of the RM380 magazines you can see a spacer as these are, or were, 9mm magazines in the original design. Remington moved the magazine release from the heel of the grip to the back of the triggerguard, added the slide lock and changed the recoil system to make it much more durable. Best of all, Remington can produce this pistol for less than half the cost of a Rohrbaugh. 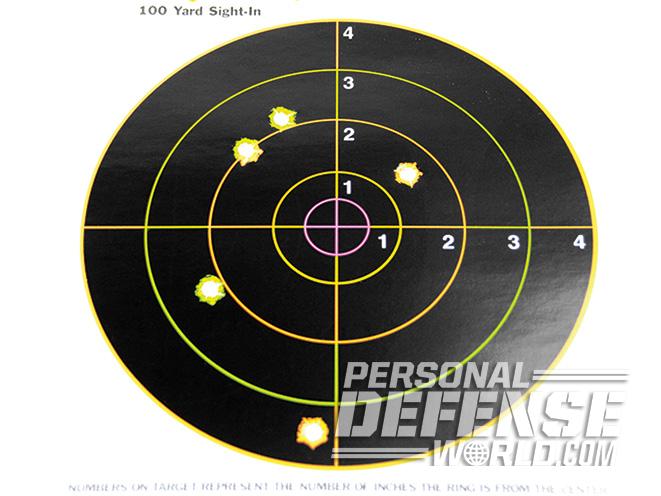 On the range, the RM380 I received for testing performed just as well as the production samples I had previously shot. I did have a slight hiccup at the start with the flush-fit magazine. When fully loaded with six rounds, the slide would lock open after the fifth round fired with another round still in the magazine. This odd malfunction occurred with the first three full magazines I fired but never again after that, and it did not occur at all with the spare finger-extension magazine. I chalk it up to a slight break-in period, but if there is any doubt in your magazine’s reliability, make sure to replace it.

This small pistol does an excellent job of absorbing recoil and only just starts to get slightly uncomfortable after 100 rounds or so.

RELATED STORY: 7 Ways To Soup Up Your Remington Model 700

It should also be noted that Remington specifically warns against using any +P or +P+ ammunition. The long trigger pull takes a bit of getting used to for those of us now accustomed to striker-fired guns, but it is smooth and consistent with a clean break.

For accuracy testing, I fired off hand at 7 yards. Better accuracy results could certainly have been achieved firing from a stable benchrest, but that is not how this pistol is meant to be used. It is a defensive pistol, and I tested it as such.

Group sizes across three different types of hollow-point defensive ammunition averaged about 3.5 inches at that distance, which is certainly good enough for any defensive use.

The Remington RM380 is not the smallest or the lightest or the cheapest .380 ACP pocket pistol you can buy, but it is the most durable and exceptionally well made. Remington planned the roll out of this gun well indeed, and already a Crimson Trace red laser unit is available as well as several holster offerings, including those from CrossBreed and Recluse, among others.