Practical Concealed Carry: How to Carry A Full-Size Pistol

Before you give up firepower and effectiveness by packing a subcompact pistol, consider carrying a full-sized fighter. It might seem impossible, but the right gear will help you.

Enter into a conversation with anyone about concealed carry and the first issue will be what size pistol you should carry. My first recollection of that discussion was in 1983 with a police officer and Master Class IPSC shooter. At the time, semi-automatics were not approved firearms yet they were often carried “off-duty.” For many, policy violations were secondary to being properly armed. In this case, the other officer carried a lightly customized, full-sized 1911 in 45 ACP. Given that the issued weapon was a six-shot revolver, two extra rounds and a spare magazine were a huge advantage. To be honest, the “wonder nines” were not all that wonderful back then and 9mm ammunition was not what it is today. The huge number of compact and subcompact pistols that exist today were not even a consideration at the time. So for semi-autos, 1911s were still the choice of many professionals, and more often than not, full-sized versions were carried. Almost universally, the reasons were similar. They were 100-percent reliable, provided better ballistics and were no more difficult to conceal than smaller pistols. This truly set the tone for me as a concealed carry professional, a tone that still exists to this day.

When it came to revolvers, the same was often true. My first real duty revolver was a 4-inch Colt Python. That revolver served me through the academy and my entire time as a reserve with the sheriff’s office. That did not change until my employment our department switched to the Smith & Wesson Model 686 by policy. Off-duty weapons were authorized, but only one: the five-shot Chief’s Special.

The same argument arose and the big revolver won the day. Sure, the five-shot was smaller and easier to conceal, but that is not the only issue. The move down to .38 Special, the loss of one round, and the ballistics of a 2-inch barrel made it a problem. If that pistol was necessary off-duty, it was probably for a really bad situation and every advantage was required. Lastly, there is the cost. As a rule, if an agency does not issue a second pistol for off-duty carry, an officer will carry their issue pistol. In 1989, my $15,000 a year salary all but precluded such a purchase, and the situation is the same today. Most officers simply do not have the money to buy a second pistol. It is no different for most concealed carry holders—most have the money for one pistol. The bottom line was simple: You had to find a way to comfortably carry and conceal your primary weapon, which was typically either a full-size pistol or revolver. 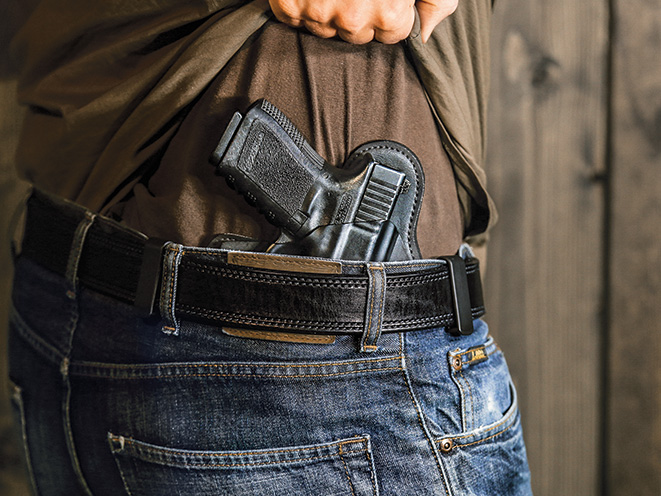 From a purely practical point of view, as pistols get smaller you are making a compromise. To this day, the most effective self-defense pistols utilize 4-inch or longer barrels. The laws of physics are not altered by a need for comfort. For well over 10 years, this was evident on the range as a rangemaster for the police department. As convenient as our issued subcompact 9mm was, many officers suffered malfunctions, and what ability they had to hit the target was flushed right down the toilet. Sure, some were fine, but many had issues. It has a short sight radius, and like all small automatics, they are more prone to a less-than-firm grip. That is not the gun’s fault—it’s just a matter of physics.

Almost without fail, that small pistol was sold to someone else and the move was made back to the full-size pistol. That was true of all of them. A recent “off-duty” shoot made this even clearer. A solid 60 percent of the little guns simply did not run through the whole qualification, and many simply could not hit the side of a barn. It was almost funny to see those with five-shot revolvers trying to make it through a 20-round course of fire with speedloaders that never leave the range bag except to qualify. Not to mention the officer or two who had his pistol fall out of the $5 inside-the-pants holster he “regularly used.”

What you are willing to give up for comfort’s sake? It is no different for any concealed carry holder. Do you carry what is comfortable or what will win the fight? What are you willing to compromise in order to strike a balance? In truth, with a little bit of effort, you may not need to compromise.

So how do you carry a large pistol? It is all in the accessories. The first and foremost is the holster. Having carried a 4-inch or longer 1911 or revolver for well over 25 years now, that may be the most important purchase other than the pistol. It always makes me cringe when I see someone spend well over a grand on a pistol only to get the cheapest possible holster they can find on the market. Any pistol carried in a poorly designed holster will be uncomfortable and may be downright dangerous.

The holster industry makes many fantastic holsters that carry your full-sized pistol firmly against the body, support its weight and allow for comfortable carry all day long. Done correctly, Kydex is an excellent holster material, but they are not all created equally. Having recently run some belt slide holsters from JM Custom Kydex, they feel as good as my inside-the-pants holsters and are of the highest possible quality. The use of this material and some custom work allow the holster to wrap around the waist a bit, making for fantastic comfort and concealment. BlackHawk, Blade-Tech and Comp-Tac are all excellent holster makers, and there are several others. You just need to make sure the holster holds the gun firmly, close to the body, and rides at a height that allows the muzzle to be covered with the proper clothing.

When it comes to leather, you really need to step up and get good quality. Galco makes some of the best holsters available on the market. My Smith & Wesson .44 Mag with a 2-inch barrel rides in one all the time. It places it high on the belt, holds it firmly and has been carried for days on end on trips, especially to those places where semi-automatics are considered evil. My Mitch Rosen IWB holster has held dozens of 1911 pistols over the last 10 years and still works perfectly.

A full-sized pistol can be carried in a quality holster comfortably, especially with the correct belt. Put a full-sized pistol in a great holster and slide it on the belt you got at the big box store and you are in for disaster. Get a real pistol belt made to hold a pistol. That should be the case regardless of the pistol’s size. Manufacturers have really stepped up to the plate. Both BlackHawk and Galco make pistol belts that rival the biggest fashion names for craftsmanship, and they look just like any other belt. There are many others, and all are designed to carry a pistol comfortably and not look like a pistol belt.

So how do you cover up the iron? Well, it takes some thought, and maybe a bit of compromise to the fashion idols, but it can be done. Long before carrying a pistol on a plane was such an ordeal, I carried full-sized 1911 pistol for three weeks for training in Hawaii. When not training, the entire trip consisted of shorts, sandals and Hawaiian shirts. All that was needed was an undershirt to protect against the IWB holster and a large outer shirt. Luckily, that was the fashion out there, so no one had any idea. I was just another tourist—not an off-duty cop at training.

Later, as big T-shirts became the craze, I used the same techniques. The hardware was concealed with a breathable undershirt and an oversized T-shirt. This allowed comfortable carry in even the 100-degree summers in Utah. Winter is easy (if you have one), as coats make the process simple. Then it is more about covering it up and still being able to get at it. Summer is the hardest season in which to achieve proper concealment.

Today, the choices are endless. BlackHawk yielded the best to date for me. Its 1700 shirt is perfect. Walking in the door with the shirt on, my wife commented on how nice my new dress shirt was—now that is concealment. She had no idea it was made for concealed carry. It gives you a collared shirt to wear no matter the climate, and it looks nothing like a concealed carry shirt. Yet, the 1700 is comfortable, breathes and conceals my full-size pistols every day. One of these has been covering up a S&W 9mm Pro for several weeks now. Other companies offer similar products these days, and many of them work fantastically for concealing a full-sized pistol.

Just about everything in life requires some compromise. Carrying a concealed weapon is no different. For many, the need to stay fashionable is more important than the pistol they carry. For others, it is about the ease of concealment, as opposed to the effort made to conceal. There are also those who are about bringing the best gun to the fight, and a bit of compromise to fashion or ease is not an issue.

It’s just important to realize that among all the attention on smaller and smaller pistols for concealed carry, the full-sized pistol is still viable and may be the best choice. All it takes is some thought, some effort and an understanding that you may have to spend a bit up front to save a ton later. Given that your carry weapon is a lifesaving tool, carrying a full-size pistol just may be the best decision you ever make.