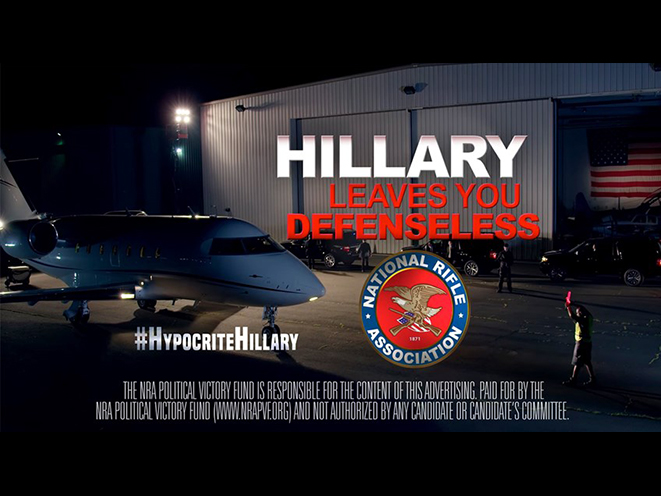 The National Rifle Association Political Victory Fund (NRA-PVF) today launched a new $3 million TV ad buy making the case that Hillary Clinton is an out of touch, hypocritical politician who would leave the American people defenseless.  This ad helps highlight the fact that the right of law-abiding Americans to keep a firearm in their homes for self-protection is on the ballot in this presidential election.  The ad, titled “Defenseless”, began airing this week on national cable as well as local broadcast stations in key battleground states, including Pennsylvania, Ohio, Nevada and North Carolina. It is the third installment in a series of ads by the NRA-PVF.

“Hillary Clinton has supported the concept of confiscating firearms from law-abiding citizens.  Despite what she says to try and get elected, she would stack the Supreme Court with anti-gun justices who would overturn our fundamental right of self-protection. So it is not an understatement to say that the future of American freedom is at stake in November,” said Chris W. Cox, chairman of NRA’s Political Victory Fund.

In a candid moment, Hillary Clinton told an audience of supporters that “The Supreme Court is wrong on the Second Amendment, and I’m going to make that case every chance I get.” She was referring to the landmark case of District of Columbia v. Heller, in which the Court held that the Second Amendment guarantees an individual right to keep and bear arms.

The ad highlights the hypocrisy of Hillary Clinton’s views on the Second Amendment and reveals her as a political elitist who is out of touch with the American people.

“The choice to own a firearm doesn’t belong to the government — it is an individual freedom,” continued Cox. “So it is too important to be subject to one set of rules for political elites like Hillary Clinton, and a different set for the rest of us.”

Watch the ad below. 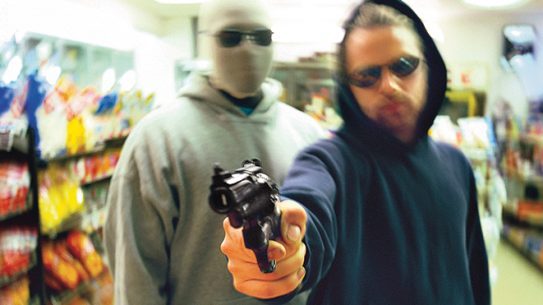 Armed Citizen: 9 Cases Where a Good Guy with a Gun Took Down a Bad Guy