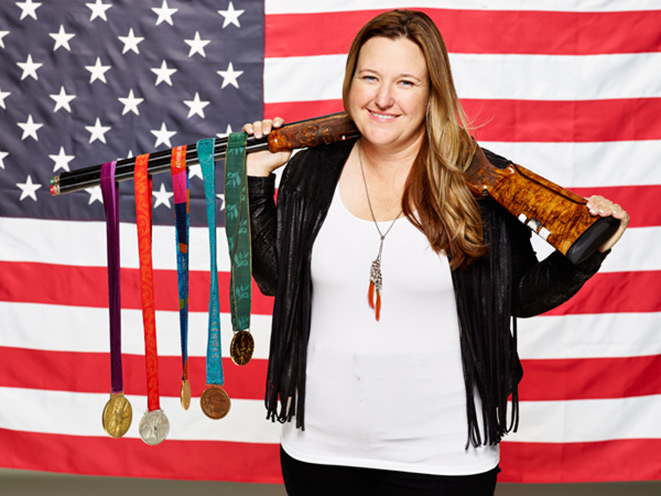 1 of 5
Team USA Shoots For Medals & History In Rio 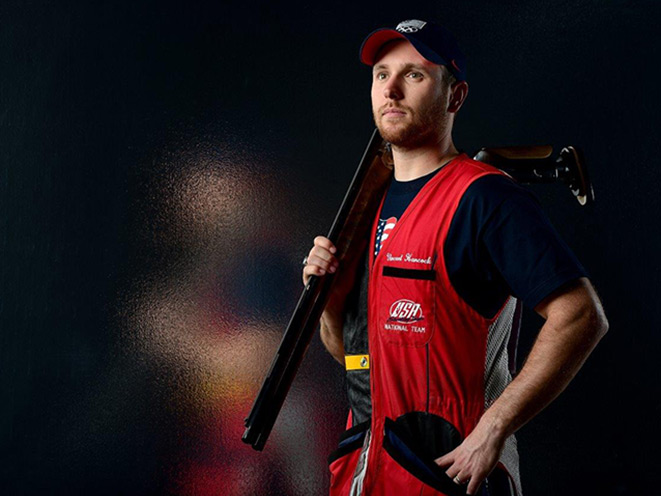 2 of 5
Team USA Shoots For Medals & History In Rio 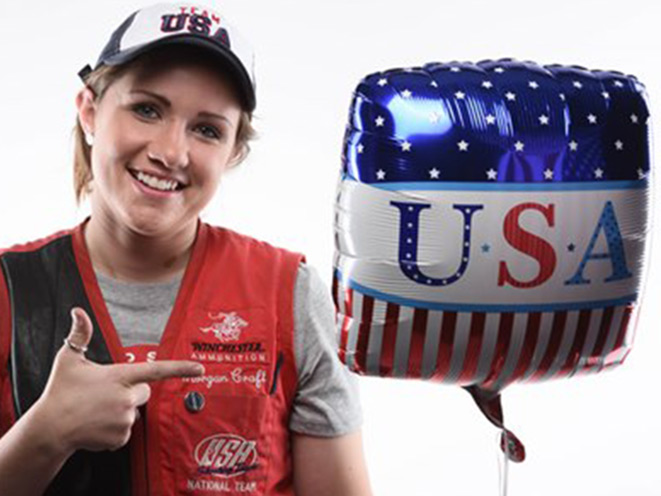 3 of 5
Team USA Shoots For Medals & History In Rio 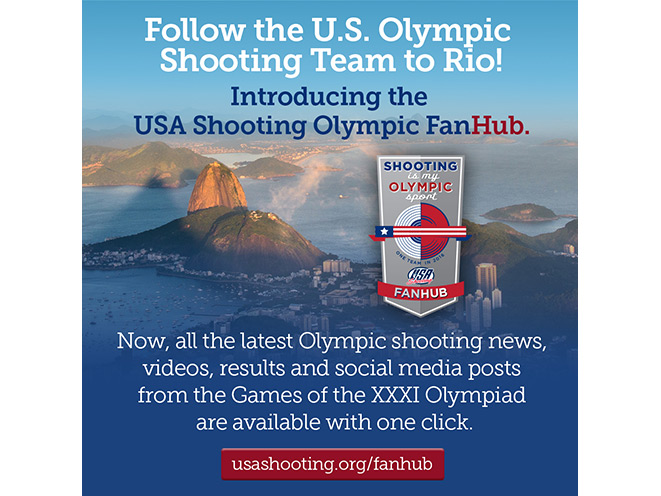 4 of 5
Team USA Shoots For Medals & History In Rio 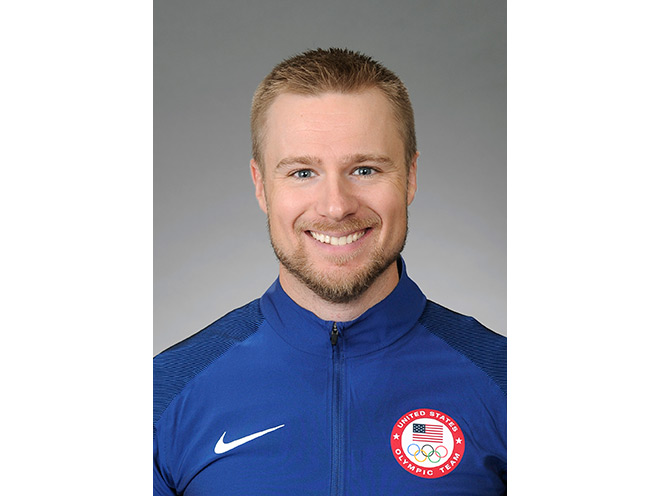 5 of 5
Team USA Shoots For Medals & History In Rio 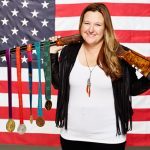 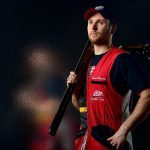 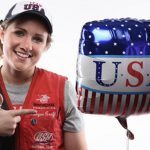 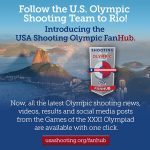 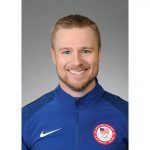 Years of build-up. Hours upon hours of prep. Bullets cast and guns raised. All for a 10-day period of time that helps define an athlete’s and sport’s existence. The destination is Rio de Janeiro for 20 Olympic and five Paralympic Shooting Team members and the goal is medals and history.

The stable is loaded with the Olympic squad featuring more than half (11) of all Olympians that saw action in London 2012 and 12 with Olympic experience of some kind. Prove of their combined shooting prowess lies in the fact that the six Olympic medalists on the team have collectively amassed 13 medals and there’s a combined 28 Games of experience among the 20 shooters.

Josh Richmond, Frank Thompson, Keith Sanderson, Michael McPhail, Enkelejda Shehaj and Sarah Scherer all fought hard to earn another Olympic opportunity. Now they’re ready to put some close calls and Olympic disappointments behind them and with a hunger to earn the type of Olympic prestige their teammates have found.

Young guns like Morgan Craft, Lydia Paterson, Will Brown, Lucas Kozeniesky, Dan Lowe, David Higgins were all teenagers during the last Olympic cycle, and rifle phenom Ginny Thrasher still is one. Still, they’ve all grown up fast over the last year to represent an exciting youth movement in the sport. These sharpshooters have a steely determination about them and compete well beyond their years.

“I’m really looking forward to seeing what this team can do,” Emmons says. “I truly believe we have so much potential for greatness. If everyone does their part (athletes and staff), works hard in their respective areas, and works to create that exciting and positive environment we’ve had in the past, there’s no telling what we can do. It’s going to be fun!”

There is no lack of storylines to relish as we ready ourselves for the shooting competition that begins August 6.  Here’s a few to whet the appetite before sifting through the pages of USA SHOOTING’S FULL OLYMPIC PREVIEW to intrigue you more.

Mix for Six: Certainly, one of the main storylines of this team, just as it has been the past two decades, is the medal pursuit of Kim Rhode.  Her status as sport and Olympic legend was solidified in London with a gold-medal showing and a fifth consecutive medal. Always embracing the journey that’s come with each of her five Olympic runs, Rhode added motherhood and health issues this time around as she looks to continue setting records no one may touch again.

How much does winning s sixth medal motivate her? “It would be huge,” she admits. “But it’s not about just me.  It’s what it means to the sport, to the shooting industry. It’s a huge driving force in that aspect.  Personally, I think it would be big, but it’s more about all the other factors.  It’s never about that for me. It’s always been about what I can do to give back, move forward and hopefully inspire kids and the next generation.”

Trio In Rio: Admittedly, Vincent Hancock has had no greater love and appreciation for this sport than he does right now and it is one of the main ingredients fueling his desire for continued perfection at the 2016 Olympic Games in Rio de Janeiro.  Now living in Fort Worth, Texas, his deepest conviction lies in both providing for his sport and his family, and he won’t be satisfied until both are well taken care of.

“I’ll be satisfied with what I achieve after, fingers crossed, I get to Rio and get a third gold medal,” Hancock says. “I’m happy with what I’ve done now, but I really feel like that I can go and win this third one and cement my place in history with the greatest of all time. I think that would be a huge platform, not just for me personally, but for the sport as a whole to show off what my sport is, who I am, what this sport has done for me and what this sport has turned me into.”

Rifling Through History:  The three-time Olympic medalist Matt Emmons has comprised a body of work that suggests he’s at the head of his class in the history of this sport.  Simply put, Emmons is one of the best marksmen in history, taking his place alongside this sport’s legendary figures.  Now in the twilight of his career and another Olympic Games squarely in his sights, he’s acutely aware that the time to add to his shooting legacy is fleeting. If he’s able to step on the podium for a fourth time in four Olympic Games, it would be another shining moment.

As demonstrated in the past, the athletes are sure to do their part to make us proud. The U.S. Olympic Shooting Team will epitomize the very essence of the shooting sports by their pursuit, dedication, discipline, responsibility and representation. Quite simply, our athletes continue to set the bar as positive role models for the shooting sports and continually represent positive virtues for the gun culture to recognize.

The only way their story is going to be told is if we collectively come together to tell it.  It’s for this very reason that USA Shooting launched the MY OLYMPIC & PARALYMPIC SPORT campaign earlier this year. The intent is to try and rally the entire shooting sports community now and in the future, asking members, fans and enthusiasts to declare shooting as their Olympic and Paralympic sport.

The bottom line is this. Our athletes are the story and they will represent their sport and country with class and dignity while providing the positive example for a gun culture in desperate need of a changed narrative. One Team in 2016. Go USA! 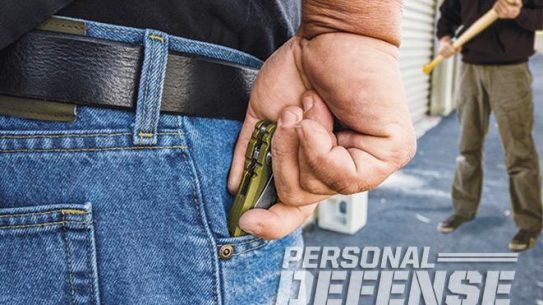 If you are unable to carry a firearm and are serious about personal protection,...