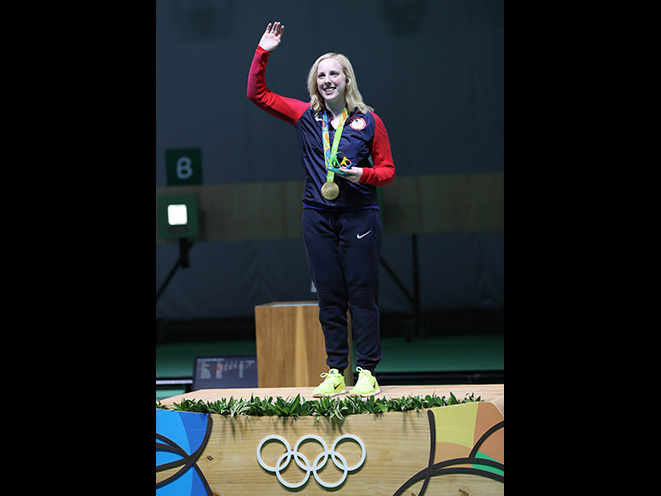 For sports like shooting, there is no bigger opportunity to showcase greatness than during the Olympic Games. With a Finals performance for the ages, teenage phenom Ginny Thrasher set the table by winning the first golden medal of the 2016 Olympic Games in Rio de Janeiro.  In winning the Women’s 10-meter Air Rifle event Saturday morning, the spotlight was glowing greater on the shooting sports and USA Shooting than any other time in history.

The Olympic stage is big, but earn the first medal for Team USA and there’s a glorious celebration that ensues before other sports assume the spotlight as well. Shooting counterparts, USA Archery, earned a Men’s Team silver medal four hours later.  Two hours after earning gold at the Deodoro Shooting Center, Thrasher, 19, was trending on Twitter as she was taking her victory lap in a whirlwind of media interviews around Rio.

Check out her on-set interview with NBC’s Dan Patrick

Thrasher highlighted a day for the U.S. Olympic Shooting Team that included four top-18 finishes and a Finals appearance and eighth-place finish for Sarah Scherer. In Men’s Air Pistol, Will Brown and Jay Shi finished 12th and 18th respectively in the first Olympic Games competition.

Unflappable she has been during her growth this past season as a West Virginia University freshman and now Olympian. Thrasher’s meteoric rise to this moment started with a pair of NCAA individual rifle titles while leading the Mountaineers to a fourth-straight overall title in March. If ever the day to flap, however, it was this one. Qualifying sixth, the 23rd-ranked shooter was going up against the past three Olympic gold medal winners in 2004 & 2008 Olympic champion Li Du and 2012 gold medalist Siling Yi of China. Du had set the Qualification world record during qualifying with a score of 420.7 compared to Thrasher’s 416.3.

With the qualification scores thrown out and 20 shots to gold, Thrasher (Springfield, Virginia) showed no fear right from the very beginning, firing a perfect 10.9 score on her very first shot, showcasing that steely determination that got her to Rio. She’d take over the lead halfway through the Final and somewhat coast to victory by a one-point margin, a relatively large gap in this precise sport.

Olympic beat writer, Beau Dure, who termed her a teen phenom in Bleacher Report earlier this week, described Thrasher as the “most composed 19-year-old on the planet” earlier today on Twitter.

Not bad for someone who took up the sport five years ago after a hunting trip with her grandfather.  Particularly considering that three years ago, she was just the 45th best junior in the nation.  Thrasher becomes the eighth American, and third U.S. woman, to earn the first Olympic gold at the Olympic Games.  She is the 15th teenager all-time to earn shooting gold joining teammates Kim Rhode (17 in 1996) and Vincent Hancock (19 in 2008).  Thrasher was awarded her medal by International Olympic Committee President Thomas Bach, in the presence of United Nation’s Secretary General Ban Ki-moon, the Vice Premier of the People’s Republic of China Liu Yandong and of the ISSF President Olegario Vazquez Raña.

“It’s just an intense feeling of pride for my country. I’m so happy to be here,” said Thrasher. “I was just trying to shoot the best that I could. You know, for my first Olympic experience just coming away with any medal is an absolutely phenomenal thing, and for me to come away with the very first gold medal in Rio 2016, for the United States of America, at 19 years old, is incredible!”

ATHLETE EXTRA:  Get to know more of Thrasher’s Story

Scherer qualified fifth with a score of 416.8.  She struggled in the Final to become the first eliminated as a result of a technical inspection before the Final that forced her to remove some tape from her buttplate that she had used without any problem through the last four years.  She had the gun inspected two days prior to the match and nothing was deemed a problem then.

Still, the fact that she made a return trip to the Olympic final where she finished seventh in 2012 is nothing short of remarkable.  Just the fact that she’s competing is an extraordinary feat for Scherer, having undergone two major back surgeries since 2014 as a result of three herniated discs.  She sat out the better part of two years trying to get back against her doctors wishes to compete. She announced her readiness with a Finals appearance during World Cup Bangkok in March and then by winning Olympic Trials. She competes for the final time in Rio, unable to continue in a sport she loves due to a back that won’t support it.

Both Scherer and Thrasher compete Thursday in the final Women’s Rifle event of Three-Position.

After a long and grueling competition, team members Will Brown and Jay Shi finished 12th and 18th respectively. Brown and Shi both shot a 577/600, three points shy of the mark needed to make these Finals.

Brown (Twin Falls, Idaho) fought hard, maintaining a place in the top eight for a majority of his competition, but he was not able to secure those last three points to pull him into Finals. Brown is currently ranked seventh in the world.

Shi (Phoenix, Arizona) also shot very having climbed as high as ninth before the final string (10 shots). An 18th-place finish is a real accomplishment for Shi as he is currently ranked No. 38in the world.

Vietnam shooter Xuan Vinh Hoang earned the country’s first-ever Olympic gold medal in a tight contest with Brazil’s Felipe Almeida Wu.  The third-place finisher was China’s Wei Pang. Jason Turner’s bronze in 2008 and Erich Buljung’s silver medal during the event’s debut in 1988 are still the only medals earned by the U.S.

Both men will be back at it Wednesday in the Men’s 50m Free Pistol event. 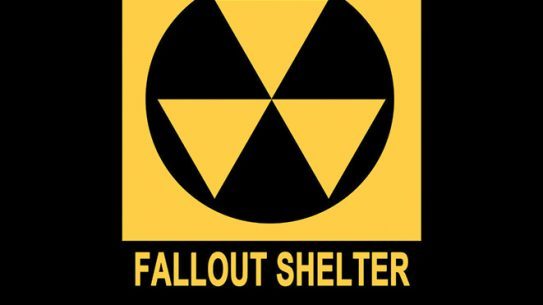 A secret safe room may be your family's best defense against a home invasion.