Sig’s Match Elite is a well-made 1911 with fast sights for action pistol shooting and a smooth, crisp trigger for enhanced accuracy downrange.

Though the .45 ACP is the most prevalent caliber for 1911s of all sizes, more pistols are now made in 9mm than ever before. For competition, the 9mm round is a better choice than the .45 ACP for many shooters because it has less recoil and is generally about 40 percent less expensive. Also, 1911-style 9mms hold one to two more rounds depending on the magazine. With less recoil and better control than a .45 ACP, the Sig Sauer Match Elite is a good first 1911 for many of the new handgun buyers who have entered the market in the last few years and want to step up from a .22 LR. (You can also buy a Sig Sauer .22 LR 1911 slide assembly that fits the Match Elite.) The Match Elite is one of thirty-three 1911 pistols offered by Sig Sauer, but it is the only 1911 offered in 9mm, .38 Super or .40 S&W. 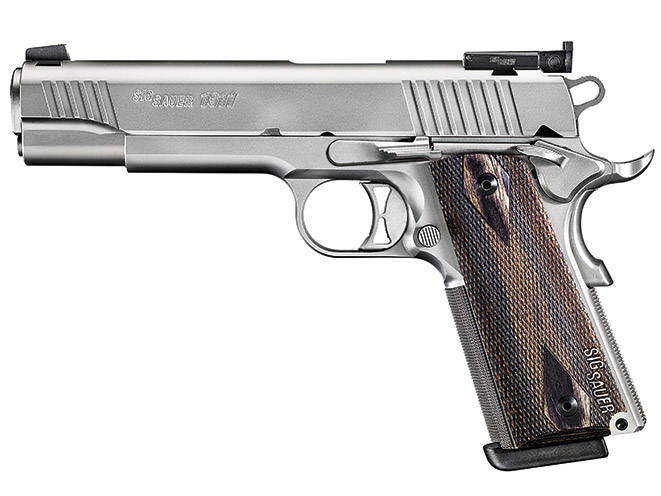 The Match Elite is a full-sized pistol that uses the familiar Browning swinging-link/locked-breech design and a standard GI-length recoil spring and guide rod. This pistol is very well made and built for accurate shooting through its precisely fitted, quality parts.

As its name implies, the Match Elite is intended for competitive pistol shooting. It is built with a match-grade barrel, trigger, sear and hammer. But besides using high-quality parts, the key to a 1911’s accuracy is a consistent, tight lockup between the barrel and slide. Tight lockup means a tight fit between the barrel and the bushing in the front, and the locking lugs, breech face and slide in the rear. That translates to a repeatable lockup after each shot.

The Match Elite is made to be accurate enough out of the box for all but the most formal Bullseye-type shooting. Its target sights are particularly suitable for practical pistol competition because the fully adjustable rear sight uses a three-dot pattern (with the front dot larger than the rear two), rather than black on black. For some shooters, those dots draw your attention to the sights when shooting at speed and transitioning between targets, which is what Police Pistol Combat (PPC) shooting is all about. The rear blade is also tapered on each side, which is intended to make target acquisition quicker than a full-sized blade because the blade obscures less of the target. The rear sight offers precise adjustments, with one click moving the point of impact 0.25 inches at 50 yards. The pistol’s ambidextrous safety also will appeal to PPC shooters who draw from a holster.

The pistol is made with all stainless steel parts (except the sights) that are well fitted, and the slide and frame are made from forgings, which yield stronger parts than those made from castings. The barrel has traditional breech cut land-and-groove rifling with a 1-in-10-inch rate of twist. Land-and-groove rifling allows you to shoot inexpensive lead bullets compared to polygonal rifling, which does not. 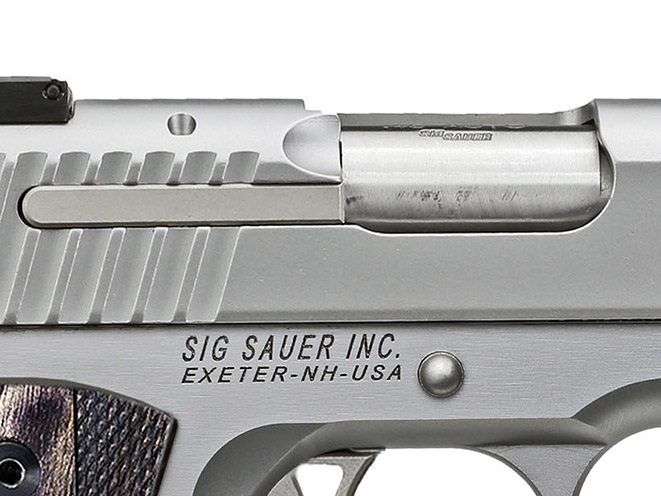 Sig Sauer started making 1911s in 2004, and the company chose a design that departed from other 1911s being offered on the market. For instance, Sig 1911s come with one of two types of slide contours: a proprietary contour with added thickness on its top that gives a more square cross section, and a traditional contour that matches most other 1911s. The Match Elite has a traditional slide and should fit any molded holster made for a 1911, whereas the “Sig slide” may not. There are four other parts on all Sig Sauer 1911s that differ from other designs: the slide release lever, safety levers, grip safety and extractor.

The ambidextrous safety levers are shorter and a bit narrower than most 1911s, but activate easily and positively. Sig made this change from its early design several years ago after receiving consumer feedback that the shorter, narrower lever was more optimal for certain holsters and concealed-carry methods. The beavertail of the grip safety is also shorter and much narrower than many 1911s. However, it still is large enough to keep the hammer from biting the web of your hand during recoil.

Like most of Sig’s P-series pistols, the Match Elite uses a wide, external, pivoting extractor instead of the internal one used on most 1911s. Sig Sauer explains that the external design is more reliable because extractor tension remains sufficient over a wider range of extractor spring strengths. In short, the springs will perform longer, according to Sig. 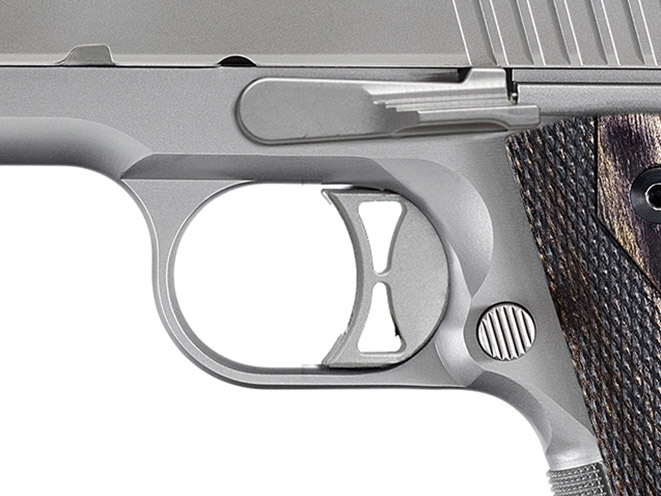 The Match Elite’s trigger is well fitted with minimal play. The aluminum trigger shoe is grooved and has a setscrew to adjust for overtravel. Minimizing overtravel in 1911 designs used to be more common for match pistol shooters who used one hand and did not want to disturb the sights after the trigger broke, but it’s now a feature of every higher-quality build I am aware of. The setscrew came properly adjusted from the factory and the trigger broke very cleanly after a bit of creep at just under 5 pounds.

The pistol comes with two 9-round, polished stainless steel magazines with thick plastic baseplates. Extended baseplates on 1911 magazines are a “must have” for action or defensive shooting. They make insertion positive compared to flush-fitting baseplates that do not easily seat and inevitably lead to empty chambers and dropped magazines. For those who want more rounds on board, Wilson Combat makes an excellent 10-round magazine that is only slightly longer.

Maintaining a solid grip on your pistol during recoil is essential to delivering accurate, quick follow up shots. The Match Elite has 30-lpi checkering on the frontstrap and the mainspring housing, and very effective checkering on the Hogue laminated wood grips. These grips are very high quality, not too thick, and are secured by two Torx-head screws.

The Match Elite can be safely carried in a proper holster “cocked and locked” with a round in the chamber (i.e., “Condition One”) thanks to a commonly used drop-safe design. Known colloquially as a “Series 80” mechanism after the first Colt 1911s that used it, this safety has a spring-loaded plunger that blocks the firing pin from moving forward to strike the primer until the trigger is depressed. The Series 80 design prevents accidental discharge should the pistol be dropped muzzle-down, causing the firing pin to move forward after overcoming its spring tension to strike the primer. 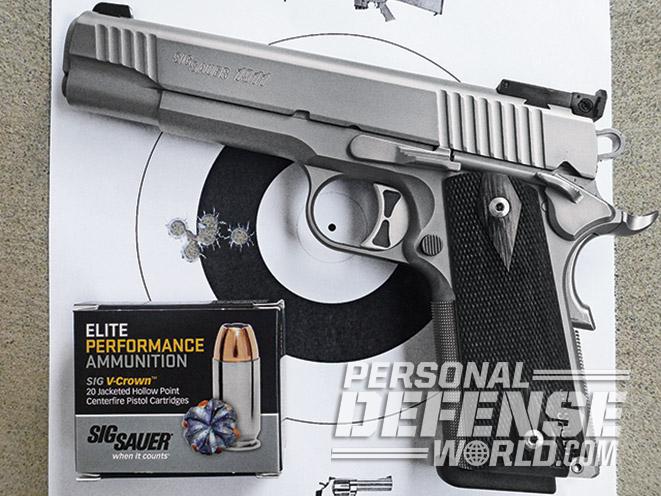 The Match Elite shot very accurately and without a single malfunction after testing over 300 rounds of assorted ammunition with different bullet designs from four different makers. Accuracy testing was conducted at 25 yards from a Caldwell rest.

The tightest five-shot groups were consistently shot with Sig Sauer’s Elite Performance 124-grain JHP ammunition. The Match Elite’s best 25-yard group shooting this load was 1.08 inches, with all groups under 2.5 inches and an average group size of 1.75 inches measured at the centers of the shots. Next in line was Winchester’s affordable USA brand 115-grain FMJ with a best group of 1.35 inches and a mean group of 2.24 inches. It’s nice to see a value brand shoot this well. The Winchester load also delivered mean velocity closest to the published velocity of the “range practice” loads tested. Remington’s 115-grain FMJ tended to shoot three of five shots tightly, but had the most “flyers” of the brands tested and producing larger groups as a result.

It’s important to note that the Match Elite came with an “all around acceptable” trigger pull weight of just under 5 pounds, but most users will shoot tighter groups with a reduction to 3.75 to 4 pounds. That’s a weight that works better for most shooters if the intended use is recreational shooting.

As expected with a full-sized, steel-framed 1911, recoil was mild even with +P loads from Black Hills, which are loaded to full power of SAAMI specifications. Handling was also as good as the 1911 design can deliver, thanks to the checkered frontstrap and grips, which made shooting using one hand easy because the pistol remained in your grip without twisting. Activating the slide release with the thumb for the right hand (and with the index finger for left-handed operation) worked without changing my grip, though making the lever a bit wider and longer would have helped significantly. 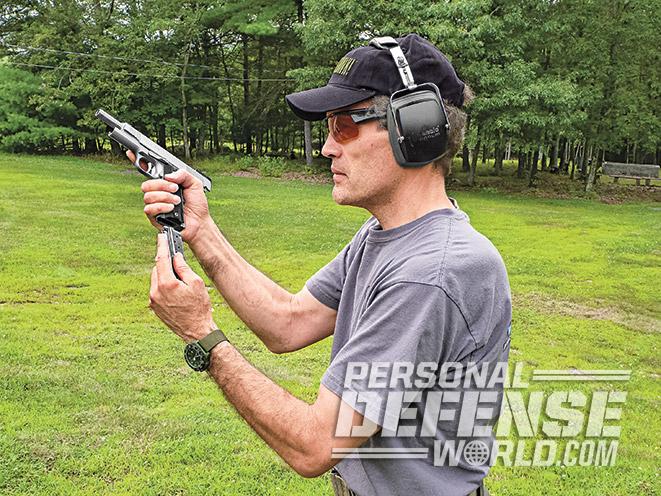 The Sig Sauer Match Elite is a high-quality build that is a very serious contender for PPC-style shooting, defensive carry (by installing night sights), or Bullseye shooting (with target sights) and a lighter trigger pull. Accurate and reliable, it also works quite well for left-handed operators. For those seeking a 1911 with the benefits of 9mm, this pistol is among the best choices available.