Spray Away: Turn Up The Heat With Elite Pepper Spray Training

by Megan Amselle
in Home & Self-Defense
0

Most of us will carry pepper spray at some point or buy it for a loved one. Maybe it’s a teenager who’s too young to carry a gun. Maybe we live in an area or work in a building that forbids concealed carry. Many people consider pepper spray to be the best alternative for defense, as it’s small and light for a pocket or a jogger’s wrist. But relatively few of us actually train to use our pepper sprays. Instead, we read the instructions and assume that such a simple device will be easy to use in an emergency.

A quick survey of today’s pepper spray options quickly proves, however, that we’ve come a long way from the generic point-and-shoot sprays of yesteryear. Now, pepper sprays come in many different shapes and forms, often with safety locks that prevent them from detonating accidentally, but which also make them more complicated to use. Enter the pepper spray safety class, an underappreciated and under-utilized option for self-defense training.

I recently attended a pepper spray defense class led by Evan Carson from Innovative Defensive Solutions, a training company founded in 2003 and based in the Washington, D.C., suburbs. The class, consisting of half a dozen students and two instructors, met for three hours one evening in a local gun shop. Carson said that, unfortunately, he seldom has enough student interest to offer this particular class. 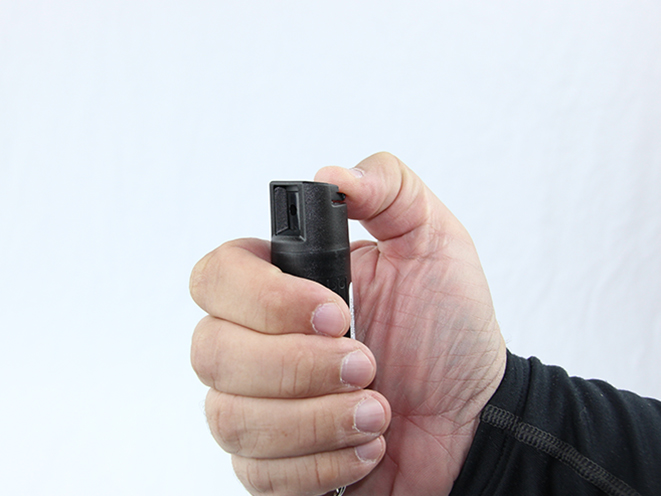 People assume that pepper spray is easy to use and that training and practice are therefore unnecessary. However, Evan’s training emphasized general awareness and skill development through deliberate practice. His class covers not only pepper spray, but also the general personal safety and conflict avoidance topics that are so important for everyone and yet are often glossed over in gun classes.

The class began with a lecture on personal safety in general and pepper spray in particular. Evan emphasized the value of avoidance and de-escalation of potential threats as the best defense for anyone. A discussion ensued of ways to make oneself an unattractive target (appearing alert, making eye contact) and of warning signs of an imminent attack (a threat that glances around and shifts his weight or reaches for his waist).

Evan is a strong supporter of the strategy taught by Craig Douglas of ShivWorks, who employs a “verbal playlist” of increasingly strident verbal commands to identify and deter potential threats. In fact, Evan had his students practice this litany by speaking, commanding and finally shouting at a simulated criminal who approached them. This activity certainly got everyone into the self-defense mindset with adrenaline flowing.

Next, the discussion turned to pepper sprays and their selection, use and effects. Evan went over the pros and cons of each form of pepper spray: aerosol mist, liquid stream, foam and gel. Each has advantages and disadvantages with regards to aiming accuracy, distance of use, risk to self and bystanders, and potency. For example, a mist spray requires little in the way of aiming, but risks blowing back in your face. Gel and foam reduce this risk and are better for use indoors, but must be aimed more carefully. Students were taught to aim for the eyes but to still be ready to run, particularly since 10 to 15 percent of the population is unaffected by pepper spray. 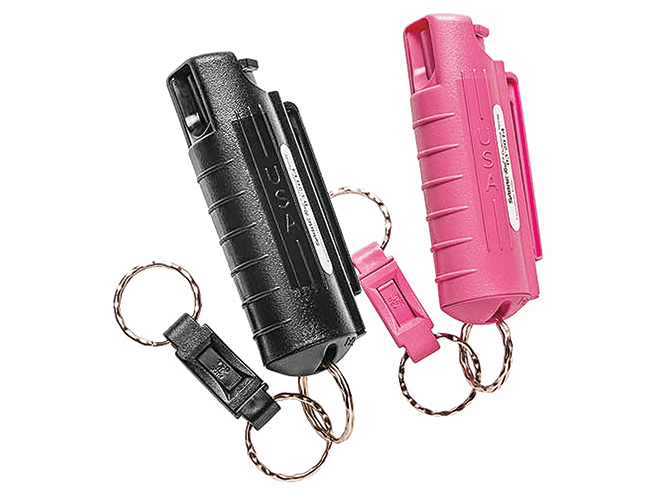 Later in the course, Evan brought out a variety of Sabre pepper spray products to demonstrate the wide range of options available to consumers today. Sprays can be carried in a bag or pocket, on a wrist or keychain, or hidden in the home. New three-in-one formulas include both tear gas and a UV-marking dye in addition to traditional pepper spray for added effectiveness. Sabre has also recently introduced the Stop Strap, an ingenious device that instantly deactivates the spray if it’s yanked off a carrier’s wrist, thus preventing a criminal from using it against his victim.

Finally, the discussion turned to cleaning up pepper spray and the legal considerations regarding its use. Legal issues are often overlooked for sprays and other less-lethal defenses, since the stakes are lower than with firearms. But a pepper spray carrier can still be held liable for its use and pepper spray is not legal everywhere. Although Sabre does make a version of its spray that is legal in all 50 states, many localities have bans on the stronger versions of pepper spray, particularly law-enforcement-strength spray and bear spray. Local laws are important to learn before buying any type of spray. And keep in mind that your spray will certainly be illegal in airports, schools and government buildings.

The pepper spray class ended with a practical session. Students used water-filled trainer sprays to practice drawing from a pocket, deactivating the safety and aiming the spray at a target. I was surprised to find that working the safety often altered the aim of my spray, to the point that it went off in a completely different direction. I would not have known to watch for this had I not taken this class.

Students also got a good feel for the range and coverage area of the spray, an important aspect to be able to visualize in an emergency. You wouldn’t want to spray an attacker at 15 feet only to discover that your spray has a range of 10 feet. 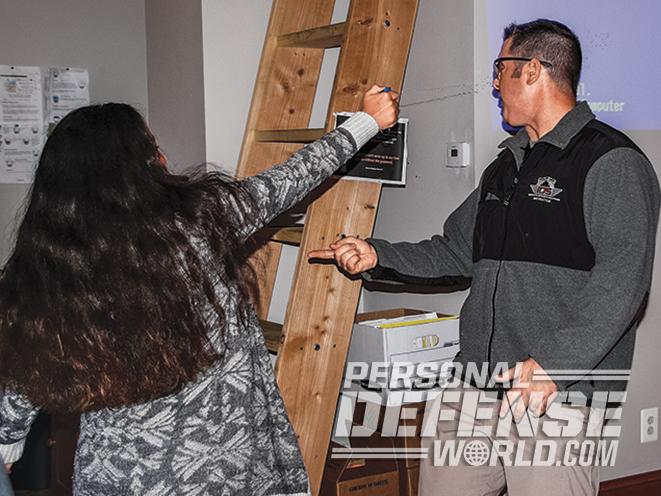 The final drill had the students spray Evan with the water units while he pretended to be a criminal. Evan advocates this type of stress simulation to try to incorporate some of the adrenaline of a real emergency into the drill. For example, I learned not to dispense the whole canister in a frenzy, but to always try to keep some in reserve in case I miss. Many students were surprised at the limited number of squirts a canister offers before running out.

If you have a pepper spray that you’ve never fired, consider taking a class to learn the ins and outs of its use. Too many of us believe we’ll remember how to instantly activate our sprays in an emergency, only to be foiled by the safety device or struggling to locate our spray somewhere in the depths of a purse. At the very least, buy an inexpensive water unit to practice with and to build up muscle memory.

Keep practicing until you can accurately visualize the spray’s range and capacity and are able to activate it without fumbling. Only then can you consider yourself prepared!