A 1911 in 21st century clothing, the FXH-45 sports a distinctive polymer frame and slide design. Note that the slide is equipped with a recessed mounting base to attach sights like the Burris FastFire III (left).

The 1911 has been around for 105 years, during which time it has been modified, improved, altered, customized, lengthened, shortened and all but completely overhauled. However, American Tactical’s FXH-45—short for Firepower Xtreme Hybrid .45—is very close to being a total redesign. More than another version of the Model 1911, the FXH-45 Hybrid is, as its name implies, a new approach to designing and building the Model 1911 to make it easier to handle, faster to operate and much more versatile right out of the box. And one look at the FXH-45 Hybrid’s design and it’s clear that American Tactical was thinking outside of the 1911 box.

American Tactical was granted a U.S. patent in April 2016 for the FXH-45 design. The company began by creating a high-strength polymer frame with 7075-T6 aluminum inserts to support the slide rails, fire control housing and mainspring housing. In other words, the frame is lightweight while still being very rugged. The polymer frame has a finger-grooved frontstrap and a distinctive, oversized and undercut triggerguard.

The combination of a polymer frame with alloy inserts may sound a little familiar as of late, but never with a 1911. In designing the FHX-45, American Tactical researched the best features from a wide variety of handguns, and not all of them were 1911s. In overall appearance, the FXH-45 is a 1911, but when you begin looking at its individual features, a number of other well-proven handgun designs become apparent.

The frame will accept any number of standard 1911 grip panels, but look at the finger grooves in the frontstrap and you’ll see hints of the Glock design. The integrated dust-cover accessory rail is similar to the Wilson Combat Protector 1911’s, with its high clearance and deep rear groove. The triggerguard is pure CZ 75 and Beretta M9.

The rakishly ported slide is reconfigured from typical 1911 contours and made from stainless steel with a black nitride finish. The lower shape of the slide is clean and tapered like an IWI Jericho pistol, but the unique, angular cuts in the slide are pure American Tactical. The slide also sports a red fiber-optic front sight and a dovetailed, wide-notch rear sight as well as a built-in, reconfigurable optics-mounting platform. Within the slide you’ll find a 5-inch, match-grade barrel made of 416 stainless steel.

The rest of the FXH-45’s features—including the skeletonized aluminum trigger, the finely checkered mainspring housing, the beavertail grip safety with a raised contact pad, the skeletonized Delta-style hammer and ambidextrous thumb safety—are all out of the 1911 custom features toolbox.

The FXH-45 could mark the beginning of a new era for the 1911 platform. In comparison to a traditional Government Model 1911, the FXH-45 has a total grip circumference (with standard-sized grip panels) of 5.56 inches, which is slightly greater than a Government Model 1911. Add the finger grooves and undercut triggerguard and you have a far more secure hold on this gun than a stock 1911. The oversized triggerguard also makes this gun much easier to operate with tactical gloves, and its squared, serrated front allows more options for a two-handed hold and longer rail-mounted accessories.

Surprisingly, this very high-tech gun uses a traditional 1911-style plunger, recoil spring and guide rod, making field-stripping very straight-forward. But what about recoil? Polymer-framed .45s tend to have hasher recoil with the exception of those using dual recoil spring and guide rod assemblies like Gen4 Glocks and a handful of custom-built and handcrafted competition and tactical 1911s costing much more.

The lightweight, polymer-framed FXH-45 is slightly nose heavy unloaded but balances out nicely with 8+1 rounds of .45 ACP ammo on board. Slide resistance when chambering the first round or clearing the gun is nominal for a 1911. The ambidextrous thumb safety solidly clicks into and out of lock, and the checkered slide release operates smoothly. The left-side-mounted magazine release is checkered well and operates quickly with either the strong hand or support-hand thumb, cleanly dropping the eight-round magazine. The black polymer, double-diamond-checkered grip panels sit well in the hand and are held down by first-rate hex-head screws.

The trigger pull on my test gun averaged 5.35 pounds with 0.125 inches of take-up, a crisp break, zero overtravel and a quick reset. To put this new .45 ACP though its paces, I chose a variety of ammunition, including Sig Sauer 230-grain Elite Performance FMJs, Aguila 230-grain FMJs, HPR 185-grain HyperClean JHPs, Federal Premium 230-grain Hydra-Shok JHPs and Hornady 220-grain Critical Duty FlexLock +P rounds. I tested the pistol off-hand on B-27 silhouettes at 25 yards.

There is total parity between the FXH-45 and a Government Model 1911 when it comes to recoil, despite the former’s lighter overall weight, and perhaps even a slight advantage due to its grip design. The trigger pull was light and consistent, and the sights were fast on target for quick follow-up shots. Muzzle lift varied from moderate with hardball ammo to substantial but very controllable with the hard-hitting, high-velocity Critical Duty rounds.

The Hornady and HPR loads tied for producing the best five-round groups, which measured 1.75 inches. The Federal load also produced a 1.77-inch group. My groups with FMJs were slightly wider, with the Sig Sauer load clustering five rounds into 1.9 inches and the Aguila into 1.95 inches. All of my shots were slightly above and left of the point of aim at 25 yards, but considering the evaluation was performed under windy conditions, I can’t complain with the FXH-45’s performance. It shot better than the majority of out-of-the-box Government Model 1911s I’ve tested. 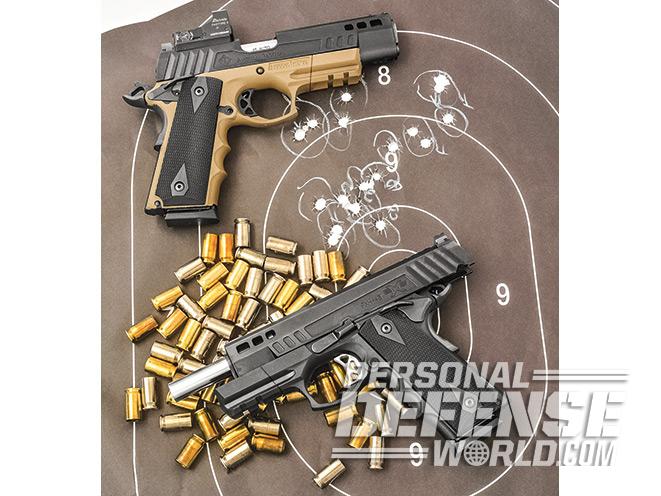 There are several features to like in the FXH-45. The big plus here is lighter carry weight, combined with a full-sized 1911 platform, an excellent grip design, a full-length accessory rail, an integrated solution for mounting optics and overall ease of operation. Overall, the American Tactical FXH-45 delivers an innovative design with an excellent fit and finish, consistent accuracy and value for the dollar. If the 1911 is an old dog, it has definitely learned some new tricks!