by Denis Prisbey
in Guns
0

When “tactical” drives such a high percentage of the handgun market, sometimes the more pedestrian (aka “uncool”) utility hardware tends to be overlooked, which is both a shame and very short-sighted.

The odds of even 1 percent of all “combat” sidearms sold each year ever being caught in the middle of a protracted shootout are astronomically slim, and there are other legitimate uses for a reliable and powerful sidearm. Sometimes, and in some places, the tried-and-true single-action revolver, despite its lack of high-tech chic, can carry the day. There’s still a strong market for single actions, and Ruger undeniably dominates among those who demand a modern design that’s simple, safe, strong and robust.

My experience with Ruger single actions dates back to 1975, when I bought my first Ruger .22 Single-Six for general woodsbumming, and my experience with Ruger .357 Mags began the following year with a Security-Six acquired to start a police career. Since those two Ruger “firsts,” I’ve worked my way through several Blackhawks, including one .357 Mag in the early 1980s that hunted with me a time or two. Ruger single actions are pure workhorses to me; when you need to hammer a bullet downrange reliably time after time and year after year, through all sorts of terrain and weather conditions, trust me, true grit counts far more than case-colored lipstick. And that’s still the deal with Ruger Blackhawks, steady sellers since Bill Ruger introduced them in original form in 1955.

The line remains very strong for the company in this modern era, and that’s because the basic design offers a solid combination of dependable quality and the ability to churn out some serious energy figures downrange where and when both are needed. Current standard caliber listings include the .30 Carbine, 9mm, .357 Mag, .41 Mag, .44 Special, .44 Mag, .45 ACP and .45 Colt, in blue and stainless, with several barrel lengths and a choice of either a conventional hammer and grip frame or Bisley versions. When you need ground-level handgun horsepower more than you need a 15-round magazine, the Blackhawk delivers. In certain situations, how hard you can hit trumps how many times you can hit.

Why A Single Action? 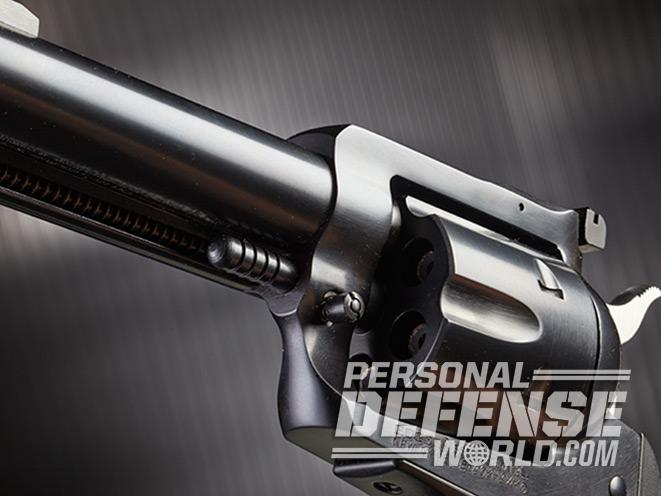 Yes, admittedly there’s a John Wayne that lies deep within many of us who grew up watching the Duke, with which there’s absolutely nothing wrong in itself, but single actions are also appreciated by the practical pistolero who understands what the operating system provides. First and foremost, it forces a shooter to actually think about what’s going on. Hitting a designated target is Job One, regardless of whether that’s a static paper bullseye at 25 yards or a charging grizzly at 10 feet. When you know you’ve got over a dozen rounds on board, the urge to just “bang ‘em off” in a hurry can be strong, and we all know the old “You can’t miss fast enough to catch up” saying. With a thumb-cocking six-shooter, it takes a deliberate action to thumb the hammer back and reacquire the target through the sights between each shot, and back in the days when we all carried revolvers of some sort, believe me, there was more of a tendency to remember you could not keep on making noise all day long without reloading. The original Henry rifles that those “damn Yankees” loaded on Sunday and shot all week long probably started the trend toward a deterioration of the idea of making every shot count, but the single action reinforces the concept today.

The single action also provides one single trigger pull. No double/single, no heavy/light, no long/short, no confusion for the less-practiced trigger finger, and no long, wobbly trigger travel. A properly set up, or even a merely broken in, single-action trigger can be a huge benefit to accurate shooting, and only requires its owner to learn one consistent trigger pull. Learn the gun, learn the trigger, and it should create no surprises in field use. You’ll know where it’ll break, and if it becomes your preferred farm, ranch or hunting sidekick, it’ll become second nature and an old friend. There’s no safety to forget, no decocker to remember, either. 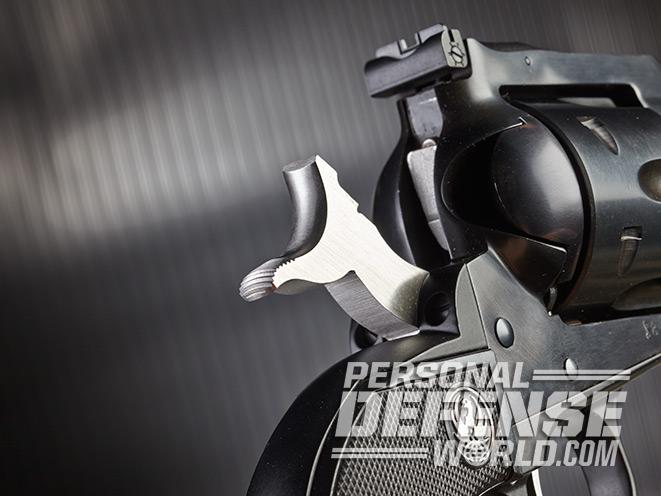 Slow loading? Yep, but if you’ve learned the gun, lived with the gun and “Zenned” yourself into becoming one with the gun, six rounds in a general-purpose, outdoor, single-action wheelgun can go a long way if you’ve got enough steam in all six boilers. Which brings us to power. The classic Colt Peacemaker has been chambered in over 30 different calibers during its ongoing saga as the Grand Old Man Of Single-Action Six-Gunnery, and the horse-dropping .45 Colt has been the most popular from its official adoption by the U.S. Army in 1873. No slouch, the .45 Colt is perfectly capable of bringing home the bacon, but the original Colt design has its pressure limitations and can’t handle much hotter fodder. Ruger’s modern Blackhawks were designed from the ground up to trade two things for a customer’s hard-earned money: infinitely more rugged guts and a markedly higher tolerance to higher pressures. The result was a gun that broke no small internal flat springs (it didn’t have any), could not chip off a relatively narrow and fragile trigger tip (it came without one), and was capable of handling .44 Magnum pressures for decades without even breathing hard.

Further evolution in the early 1970s gave us the transfer bar, and despite the core cadre of the “Pre ’73 For Me Club,” with their 1972 and earlier Blackhawk preferences, the New Model Blackhawks can be carried with all six chambers loaded, with a live round sitting forward of the hammer in the holster. The New Model Blackhawk physically can’t fire when accidentally dropped in a way to impact the hammer because, unless the trigger’s pulled to the rear, raising the bar up between the hammer and firing pin, there’s no chance for an accidental drop to smack the hammer against the frame-mounted firing pin and liven (or deaden) up the occasion. The New Model Blackhawk action also resists an accidental discharge if the hammer slips while cocking since, unless you’ve committed the cardinal sin of cocking with your finger on the trigger; even if the hammer falls far enough to transfer enough energy to ignite a primer, it can’t transfer that energy without the bar getting in the middle of things. The 19th century Colt design could occasionally shear right on through its hammer notches if the hammer slipped on cocking, or break its trigger tip, either of which could create more excitement than a mule on locoweed. The Ruger Blackhawk also has a simpler mechanism with less to bend, break or bind than a double-action revolver, a stronger frame than most, and simpler ejection. Not as fast to shoot, load, unload or reload, admittedly, but speed isn’t always the only criterion. 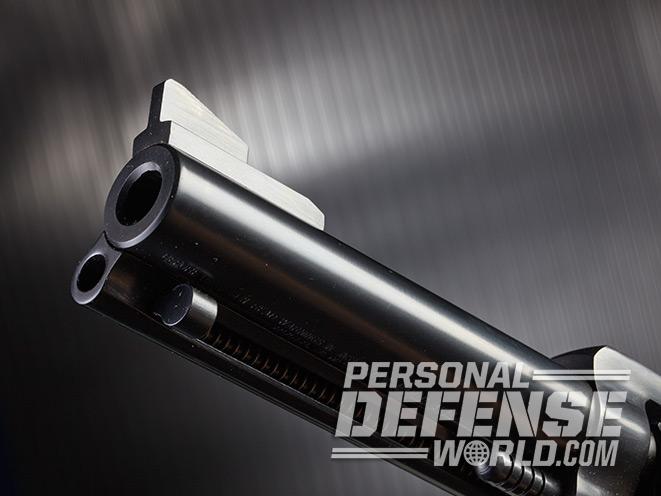 The .357 is our oldest domestic magnum caliber, and as such it’s probably our most developed magnum caliber, with commercial loadings available from very lightweight bullets through midweights to some very potent heavyweights from just about every major ammo maker and one or two specialty high-performance companies. The caliber’s also a natural for reloading, with dozens of bullet weights and designs available as components that let you decide how far you want to push the envelope. Low-velocity lead for practice, high-velocity gas-checked lead for deep penetration, and anything from light to heavy in jacketed bullets for everything in between.

The .357 Mag’s recoil is the most tolerable among the magnum tribe above the .32s, and a hard-cast, 180-grain, lead solid can take down an elk or a boar, with good placement, without also taking out your wrist, as some of its bigger magnum brothers can. Practice is easier on your hands and wallets, accuracy with a proven load can be more than you’ll need for typical uses, and the round flies flat enough to cover a rattler at 5 feet or a deer at 50 yards. And there’s the built-in versatility of being able to use .38 Specials for practice, plinking or personal defense where age or physical size may not be entirely compatible with the full-power bark of magnum loads. 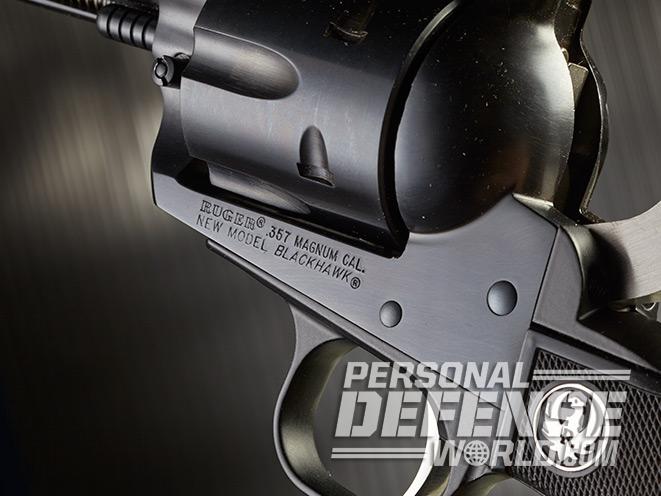 Since I prefer the easy-carrying, easy-holstering, easy-sitting and easy-pointing shorter barrels, I tested the 4.62-inch-barreled New Model Blackhawk in traditional blue, with Ruger’s standard windage- and elevation-adjustable rear sight and a tall front blade. Those adjustable sights can cover your field needs from lightweight, jacketed 125-grainers for self-defense and medium game around coyote sizes, on up to the heavy-for-caliber solid 180-grainers that I carry in the .357 for better penetration on bigger critters. My test sample came with the checkered rubber grips of recent years, but changes from older versions included a more matte finish on the alloy grip frame, a steel ejector rod housing and a stainless steel hammer and trigger. The switch to stainless on those two parts was done a few years back to simplify parts production and inventory, using the same parts in Blackhawks of either color now. And, internally, there’s no key-lock mainspring strut, another recent change. 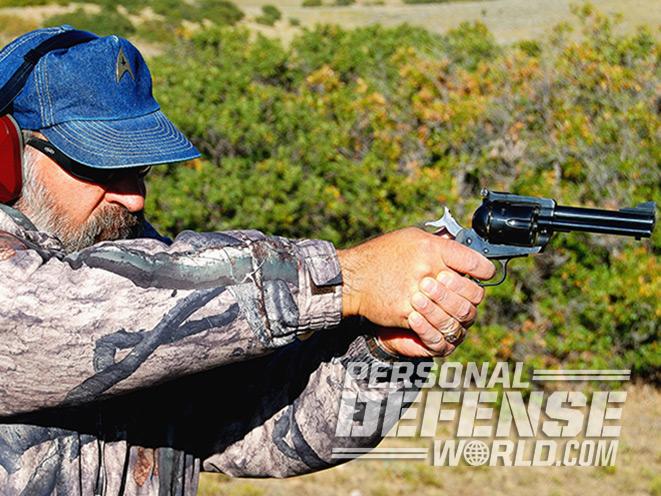 Single actions can’t be accurate? Guess again. With the heavy, full-sized frame and thicker barrel walls of the .357 Blackhawk, recoil in even hotter loads like the premium Buffalo Bores is not hard to control. With standard .357 loads, this isn’t a problem. The trigger has a clean break at 4.25 pounds with the usual overtravel of the breed, and the gun’s heft in hand inspires a feeling of confidence. Off the bench, I only wish the revolver had a white-outlined rear sight and a more visible orange front blade insert. Otherwise, from mild to wild, this Blackhawk can handle it, and it travelled along on a recent desert excursion quite handily. Bill Ruger’s 1955 brainchild is still truckin’ and still getting the job done today. It certainly can for you.