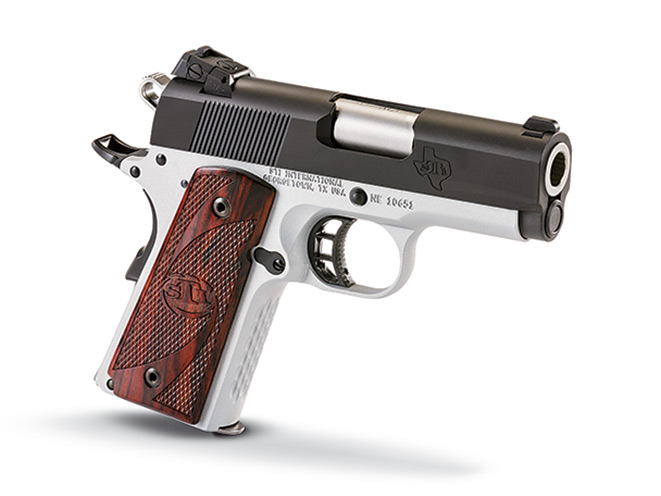 1 of 10
STI Escort
STI is known for building high-quality 1911s, and the Escort carries on that tradition in a concealed carry package. 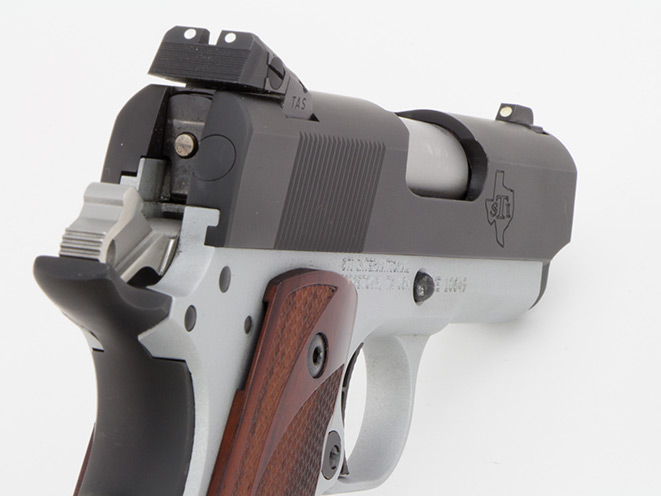 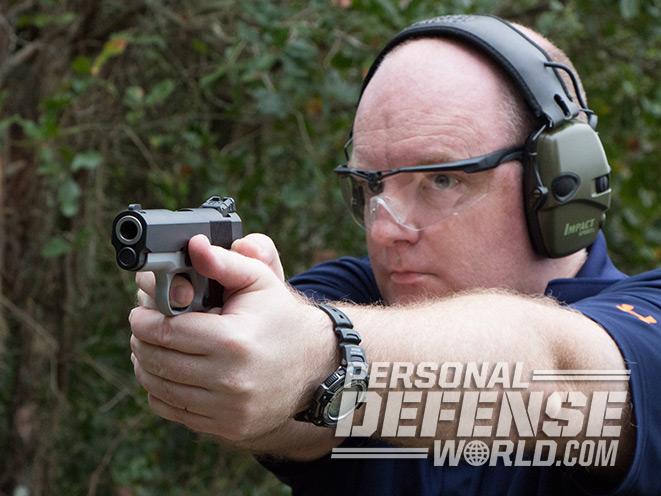 3 of 10
STI Escort
In testing, the STI Escort handled well and turned in tight groups without exhibiting any malfunctions. 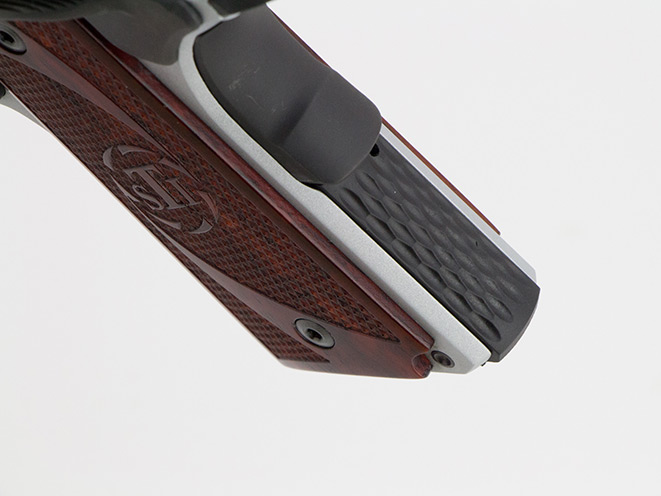 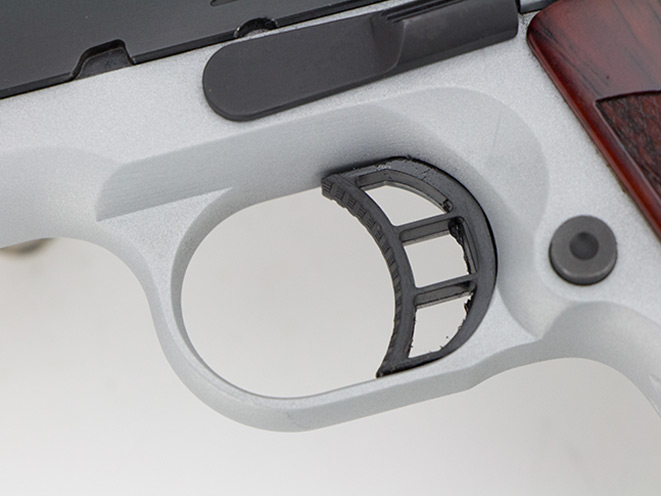 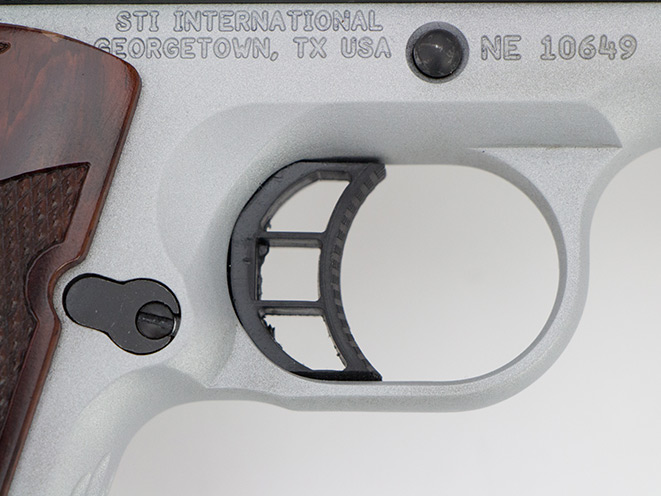 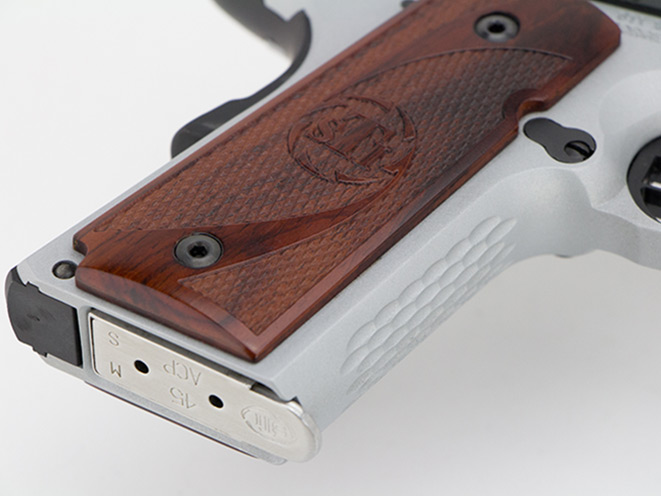 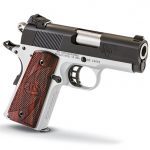 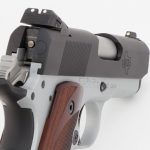 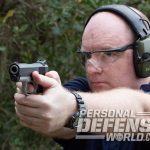 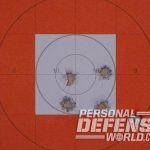 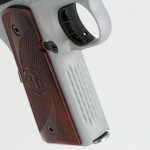 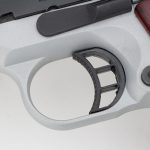 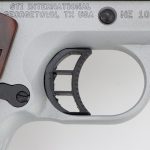 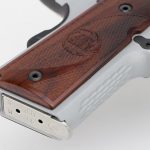 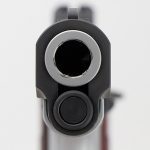 Perhaps no pistol is more readily identifiable than the 1911. These handguns have served men and women in the armed forces, in law enforcement and for personal protection. I’ve heard more than one enthusiast describe the 1911 to me as “America’s Pistol.”

It’s little wonder that this style of gun has been so popular for so long. Many people like the way the gun feels in the hand, and the single-action (SA) trigger pull can be truly exceptional. But, carrying a full-sized 1911 can be a challenge. For those who want to carry a 1911 for self-defense but would like something that is easier to conceal, STI International offers the Escort.

The STI Escort is a compact SA pistol that chops inches and ounces off a full-sized 1911 to make it better suited for concealed carry. The guns have 3.24-inch bull barrels— significantly shorter than the traditional 5-inch length—and an overall length of 7 inches. Unloaded, the guns weigh less than 23 ounces.

Escort frames are made of forged aluminum. Both the back- and frontstrap have a textured gripping area called STIppling. These machined surfaces are not the least bit harsh on the hands, yet they help the shooter maintain a solid grip on the pistol.

STI makes the Escort in two very popular calibers: 9mm and .45 ACP. My review gun was chambered for the classic .45 ACP and came with a single six-round magazine. In 9mm, the magazine will hold eight rounds, while the .40 S&W will hold seven.

The Escort has a very refined look that inspires confidence. The frame has a matte silver colored Cerakote finish. The slide is blued. One of my favorite styling features of the gun is the STI cocobolo grips. These grip panels are finely detailed with a deep, rich red color. The best part is they feel just as good as they look.

The pistol’s sights are a three-dot configuration. The front is the company’s own competition sight. The rear sight is the Tactical Adjustable Sight (TAS.) It is ramped to reduce the possibility of it snagging on clothing during a draw.

STI uses a polymer trigger in the Escort pistol. While it does feel different from a metal trigger, I could not find any fault with its performance. The trigger face was lightly textured, but not rough. While I prefer a perfectly smooth trigger face, I did not feel the Escort trigger impaired my ability to accurately shoot it.

According to STI, the polymer triggers prevent inertial firing from a drop or other hard impact. The STI trigger bow is made of stainless steel, and the trigger has a set screw to allow the owner to adjust the overtravel if desired.

STI undercut the triggerguard on the Escort. What this means is the triggerguard curves up where it meets the grip, allowing the gripping hand to grasp higher on the frame. The undercut on this gun is not as radical as it is on some guns from other manufacturers. The cut is just enough to allow for a full, comfortable grip on the gun.

STI uses a high-ride, beavertail-style grip safety in the Escort. I found it to work very well, both protecting my hand from slide bite and with deactivating the safety when gripping the pistol. I did not need to apply any conscious pressure to the safety to deactivate it. It just worked.

A relatively large thumb safety is located on the left side of the gun frame. The lever was easy to operate, and disengaging it should be natural for any right-handed 1911 shooter. Movement and engagement was positive and sure without any wiggle or looseness. Like the beavertail grip safety, the thumb safety lever has a blued finish.

In the Escort, STI uses the company’s own Recoil Master guide rod. This assembly is designed to help absorb recoil, which in a small gun can be considerable. The rod assembly has a pair of springs that act as shock absorbers to reduce the recoil felt by the shooter. Something like this has the potential of significantly improving the gun’s shootability.

Compact 1911 pistols can be finicky. Sometimes they will only run reliably with certain kinds of ammunition, and other times not at all. I was eager to get the Escort to the range to see what this pistol would do.

My normal range was unavailable, so I headed to The Firing Line, a full service dealer and gun range in New Port Richey, Florida. The crew there was kind enough to let me use a private section of the range so I could set up my gear and move about without disturbing other shooters.

When I received the test gun, it showed signs of having been previously fired. Even so, I was intent on running the gun through several hundred rounds to ensure it was broken in prior to forming an opinion about its reliability. Shooting a combined 250 rounds of Remington UMC and Federal American Eagle 230-grain ball ammo, I experienced no malfunctions and felt the gun was broken in and ready for some hollow-point (HP) ammunition.

One of the self-defense loads I tested was a 185-grain JHP from HPR Ammunition. This load uses the Hornady XTP bullet and is marketed to provide “really tight extreme spreads” and “improved accuracy.” Running the load across a chronograph for five shots, the load produced a standard deviation of 36 and a standard deviation of 13. Handheld, the load gave me the best group: 1.87 inches at 15 yards.

I experienced only one malfunction with any of the self-defense ammo. When firing the first five-round string of 230-grain Federal Hydra-Shok, the nose of the fourth round hung up on the feed ramp. After that, I did not experience any additional problems with the Hydra-Shok or any other round.

Accuracy with the gun was good. Even with a serious case of lateral epicondylitis (aka tennis elbow) in my dominant arm, I was able to regularly make five-shot groups of 2.5 inches or less with most ammo. A better shooter, or shooting from a rest, could tighten up the groups.

The trigger felt good. There was a small amount of take-up and no overtravel as it was delivered. The break was clean. Using a Lyman digital trigger-pull gauge, the trigger averaged 4.8 pounds on 10 pulls.

Magazine changes were uneventful, which is a good thing. Slightly stiff, the magazine-release button feels exactly the way I like it. The button is out of the way while shooting but still easy to access when needed. In this configuration, it is virtually impossible to accidentally activate the button, yet mag changes are quick.

After the range trip, I discovered that the left grip panel visibly wiggled against the frame. Closer inspection revealed that both the upper and lower hex-head screws had loosened slightly while I was shooting. A few turns of an Allen key tightened the grip panel back down. A small amount of blue Loctite would likely cure the problem permanently.

There has always been a great deal of debate about the best handgun to carry for personal protection. Some camps eschew the 1911 platform for a variety of well-considered reasons. However, there is little disputing these guns have served many people well since being introduced more than a century ago.

If you like the platform, the STI Escort is worth your consideration. Based on the pistol I evaluated, I believe the guns are well built, reliable and accurate. The controls are easy to manipulate, and the gun just feels good in the hand.

Featuring a truly lightweight and compact design, the Escort from STI International is easy to carry. With the right rig, the gun can be concealed under a Florida summer T-shirt as readily as a Maine winter coat. In either location, seven rounds of .45 ACP are likely to be just as effective at protecting your life and those of your loved ones.

This article was published in the 2016 issue of Gun Buyer’s Guide. For information on how to subscribe, please email [email protected]thlonmediagroup.com or call 1-800-284-5668 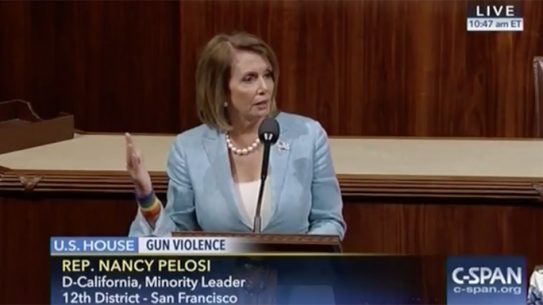 Democrats in the House of Representatives tried to push for a gun vote Wednesday,...