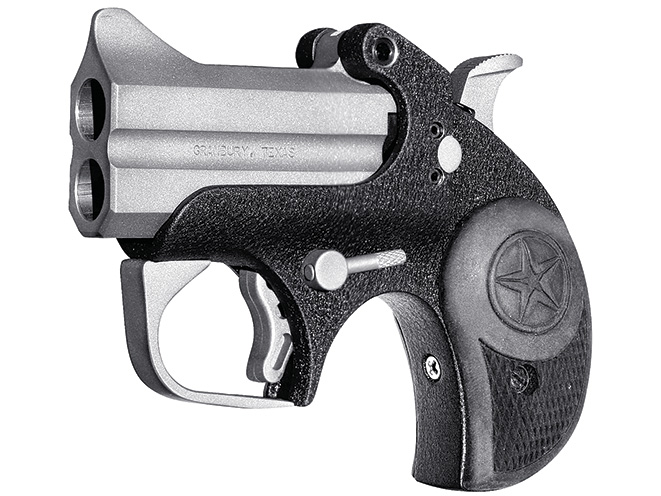 1 of 5
Bond Arms Backup
The Bond Arms Backup is an all-business derringer designed for the ultimate in concealment and durability. This pistol is among the lightest and smallest guns Bond Arms offers and features all stainless steel construction, although at first glance you might think the frame is polymer. In fact, Bond Arms has bead-blasted the entire surface to eliminate glare, and the frame is blackened and carries rubber grips for an improved hold even in inclement conditions. The short 2.5-inch barrels are available in either .45 ACP or 9mm. </br></br> Caliber: 9mm or .45 ACP</br> Barrels: 2.5 inches</br> OA Length: 4.5 inches</br> Weight: 18.5 ounces (empty)</br> Grip: Rubber</br> Sights: Front blade, fixed rear</br> Action: SA</br> Finish: Bead-blasted</br> Capacity: 2</br> MSRP: $490 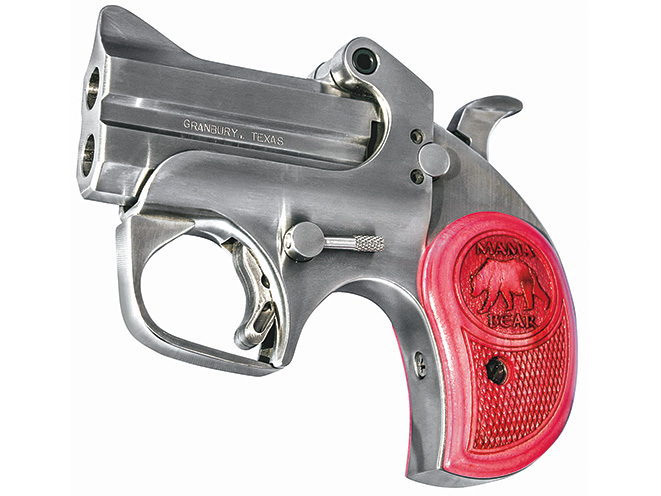 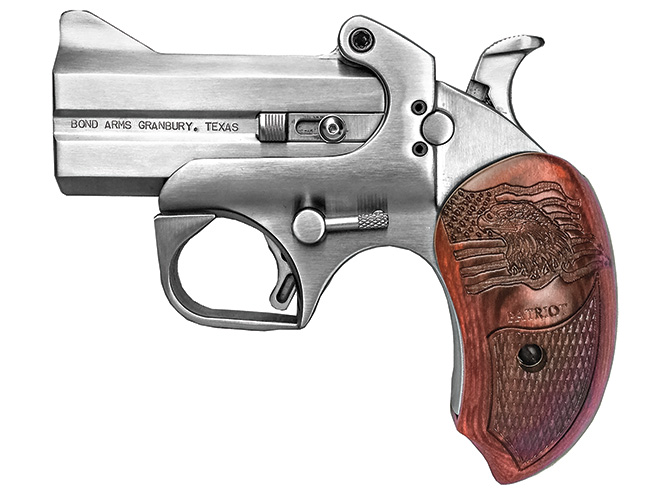 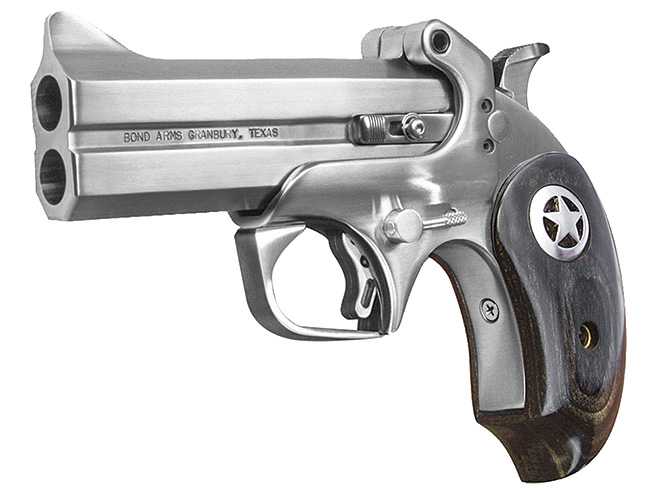 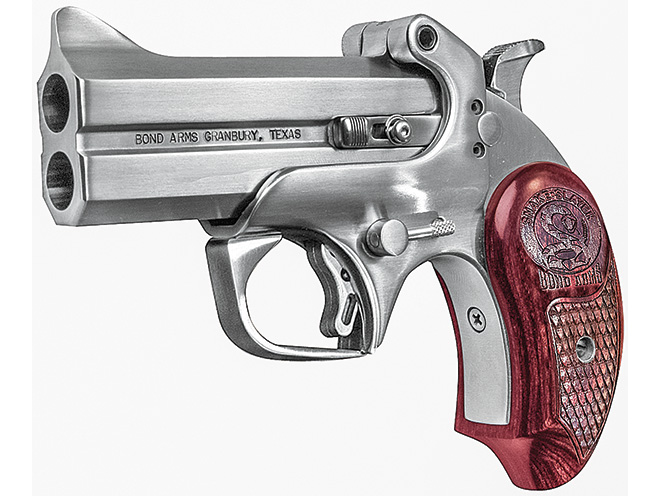 5 of 5
Bond Arms Snake Slayer
Bond Arms has done a lot to advertise the effective use of .410 shotshells against snakes, so it’s no surprise that the Snake Slayer is the company’s bestselling model. Indeed, having a handy double dose of shot will get rid of most small pests, and this pistol is well suited for hikers, campers, hunters and other outdoorsmen with 3.5-inch barrels chambered in .357 Magnum/.38 Special or .45 Colt/.410. The rosewood grips are also extended for a more comfortable hold and are finely engraved with a coiled rattlesnake motif.</br></br> Caliber: .45 Colt/.410 or .357/.38</br> Barrels: 3.5 inches</br> OA Length: 5.5 inches</br> Weight: 22 ounces (empty)</br> Grip: Rosewood</br> Sights: Front blade, fixed rear</br> Action: SA</br> Finish: Stainless</br> Capacity: 2</br> MSRP: $568 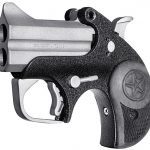 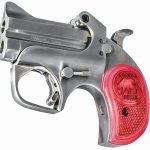 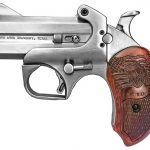 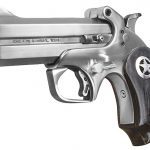 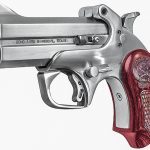 When it comes to concealed carry, there is probably no gun that has been doing it longer than the derringer pistol, first popularized by Henry Deringer in the early 19th century. The pistol type now carries an extra “r” in its name because competing companies misspelled it, and early samples were single-barrel flintlocks with big bores and short barrels. Double-barreled models, mostly over/unders, later grew in popularity. These handy pocket pistols are still made today by a few companies, but none better than Bond Arms of Granbury, Texas. Indeed, these are the Cadillacs of derringers. They’re solidly built for several lifetimes of use. More steel is used in bond arms derringers than in many polymer-framed handguns, and you can feel the quality construction when you pick one up. Gordon Bond, the owner of Bond Arms, wasn’t just satisfied in making the strongest derringer possible—he combined several innovative features that significantly increase the value of his guns.

Bond Arms derringers feature a patented interchangeable barrel system that allows the user to easily install any one of the company’s 36 different barrels with 14 caliber combos from .45/.410 to .22 LR. In other words, you’ll never have to worry about ammo shortages again. Changing barrels only requires opening the hinging action and removing the single hinge screw with a 1/8-inch Allen wrench. Replacement barrels come with sights and spring-loaded extractors preinstalled.

Bond Arms pistols also feature several mechanical safeties to protect against accidental discharges. First, the patented rebounding hammer acts as a half-cock position and blocks the hammer from the firing pins. It also acts as a hammer drop safety so the pistol will not go off if is dropped on the hammer with a live round. The hammer will only engage the firing pins if the trigger is completely depressed.

The twin firing pins retract automatically to help prevent accidental discharges when loading. A crossbolt safety is also included above the grip and can be conveniently pushed to the “off” position by the thumb of a right-handed shooter. It completely prevents any hammer contact with the firing pins when activated. The crossbolt safety can also be locked in the “on” position with an Allen wrench. An Allen wrench can also be used to activate an internal locking device, located at the top of the frame next to the trigger, to lock the action and prevent unauthorized use. Finally, all Bond Arms pistols have an optional triggerguard that is removable.

Using a Bond Arms derringer is pretty straightforward. Simply rotate the frame-mounted reloading lever downward, then rotate the barrel assembly upward, allowing the spring-loaded extractor to push the cartridges out far enough to grip and remove them, or load new cartridges. To fire, just firmly close the barrel assembly, cock the hammer and squeeze the trigger. The hammer face features a self-adjusting, spring-loaded block that alternates the firing sequence between the top and bottom barrels each time the hammer is cocked.

Bond Arms also offers California-compliant versions of its derringers. Because that state’s laws consider any handgun capable of firing a shotshell to be a short-barreled shotgun, pistols like a standard Bond Arms derringer are outlawed (as it’s easy to install a .410 barrel). To get around this, Bond Arms developed California-compliant versions that use a different-sized hinge screw and barrel sets specifically for California that do not include the .410 barrel.

While Bond Arms makes too many models to list them all, the sampling in the gallery above should give you a good idea of what the company offers.

This article was published in ‘Pocket Pistols’ #186. For information on how to subscribe, please email [email protected]outdoorgroupmags.com or call 1-800-284-5668. 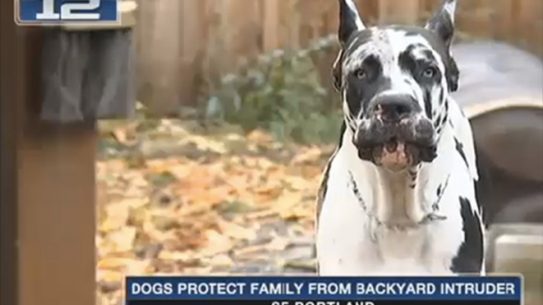 A pack of guard dogs scared off a would-be intruder at a home in...