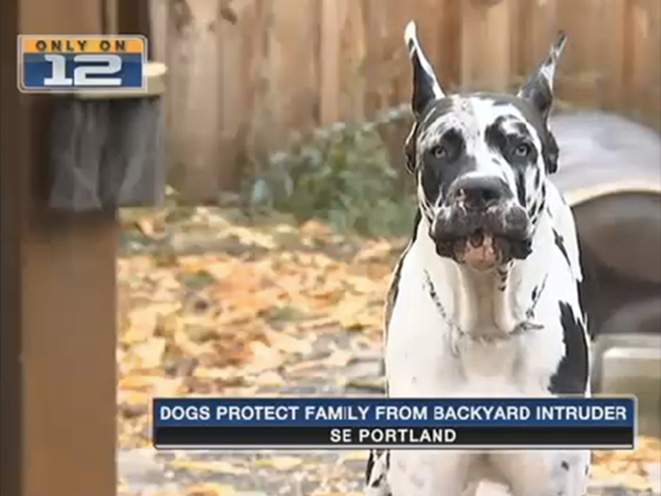 A dog can be a man’s best friend or worst enemy, depending on the situation. For one burglary suspect in Portland, Oregon, the latter was the case. An Oregon woman told KPTV she credits her guard dogs with scaring off a man who jumped the fence in her backyard and tried to break into her home while she was alone with her two children. The entire thing was captured on her home surveillance system.

Jan Merrill was sitting in the backyard of her home off Southeast 166th Avenue and Powell Boulevard when she saw a man jump two six-foot fences and walk into her backyard.

That’s when Merrill’s dogs sprang into action. She owns four of them — two Great Danes, an American bulldog-Great Dane mix and a malamute — and she was also dog-sitting a German shepherd at the time.

The dogs started barking at the suspect while Merrill yelled at him to leave. But the man ignored her and started walking around her children’s’ trampoline.

In fear for her safety, Merrill went inside her home and stayed close by her kids, all while the dogs continued to bark ferociously at the man.

As KPTV reports, the man jumped into a window well and tried to break into the home through the basement. Merrill knew she had to do something.

“I put the kids into the garage and I locked the door up here so they were locked inside and then I told the dogs, ‘Go get him,’ you know?” she said.

The dogs scared off the intruder, who could be seen on camera fleeing the scene.

Police are still looking for the man, who is described as a white male in his early 20s with red hair and sores on his face. Merrill said he appeared to be on drugs.

“We’re advertising that we’re watching,” Merrill said of her security system. “Loud dogs, big dogs and a camera system and he still pursued it. That’s the scariest part for me.” 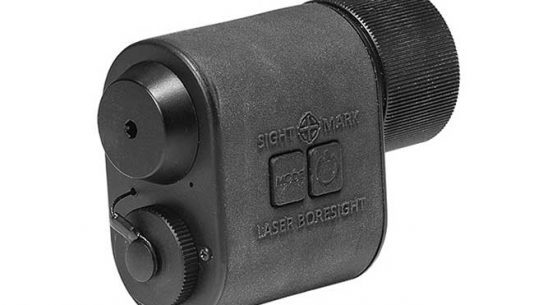 Stop wasting time and ammo, and sight-in in a matter of seconds using Sightmark's...