by Michael Humphries
in Guns, Handguns
0

The new “color case” finish option from Republic Forge makes for an extremely unique and beautiful 1911. Shown with a Milt Sparks Summer Special 2 holster and belt.

As building 1911 pistols is admittedly something of a well-worn path these days, it can be difficult to stand out from the pack. With a large number of major manufacturers and a veritable army of small custom builders making their own versions of this classic, you really have to do something special to make yourself noticed. Enter the custom-quality, American-made line of Republic Forge 1911 pistols.

As a longtime fan of the 1911 and owner of several variants ranging from stock production guns to full-tilt custom models, I recently got the bug for a new custom-grade pistol with all the bells and whistles. Having heard many good things about Republic Forge, I decided to give the company a close look. While perusing the company’s website, I discovered the following statement: “Republic Forge pistols are not built for beginners. They are built for shooters.” From what I have learned about the company, this statement seems to pretty much sum up its entire mindset regarding its pistols.

Every Republic Forge pistol is made by hand in the company’s Perryton, Texas, plant with American-made parts, one gun at a time. And, for having started just a short time ago, Republic Forge has quickly made a name for itself in the 1911 community. Benny Deal, Jeff Meister and Dale Pancake founded Republic Forge in early 2014 with the goal of offering shooters the opportunity to own 100-percent American-made 1911 pistols with the best possible components and workmanship. I recently had the opportunity to interview Republic Forge’s Jeff Meister and was able to get the inside scoop on the company and its products.

When it comes down to the nuts and bolts of building the guns, the core team is made up of Jeff Meister and Ryan Wells, both highly skilled 1911 gunsmiths. Meister himself has more than 30 years of experience building 1911s, and Wells is an up-and-coming 1911 gunsmith that the company hired right out of school. “Ryan is a highly talented young man,” Jeff told me. “He attended the Pennsylvania Gunsmith School in Pittsburgh, and we discovered him at a Brownells-sponsored job fair.”

One of a Kind

With what I had learned about the company, I was sold and wanted to try one out for myself. With a tendency toward somewhat esoteric tastes, I thought that Republic Forge might be a great source for a truly unique 1911 to add to my collection. Perusing the “Build Your Own 1911” section of the website, I began the process of ordering my own custom 1911—and I was immediately impressed by the breadth of the options available to me. A very nice feature of this section of the site is the fact that it will “mock up” an image of a pistol with your selected specifications as you choose them. Consider it a sneak peek of what you will receive.

Although I recognize the benefits of 1911 variants such as Commander and Officer’s models—and the many iterations between them—I am a .45 ACP Government Model 1911 fan through and through. So, while Republic Forge offers just about any size and variation of the 1911 you could want (and a range of chamberings), I settled in on a .45 ACP “Republic” model with a full-sized frame and 5-inch barrel.

It was at the finish selection step that my esoteric tastes began to really appear. While the company offers a broad range of Cerakote finishes as well as Damascus and blued steel, it was the “color case” option that caught my eye. “We have offered this option for about a year, and it has received a phenomenal response,” Jeff explained to me when I asked him about it. Who knows, maybe my tastes are not as obscure as I initially thought?

While I considered going with a blued finish or even the Damascus steel option on the slide, I ultimately decided to go all-in and have both the frame and slide color casehardened. Also, although I normally like forward cocking serrations on the slide of a 1911, I decided to forgo them on this one to keep the overall lines as “classic” as possible.

To be honest, when I started setting up the features of the pistol, I did not have a concrete plan for its final configuration. I really was just seeing what caught my eye in the options lists of each section. As I continued, I realized that what I was developing was a hybrid pistol with some traditional features combined with modern-day practical carry options. To that end, I selected features such as an ambidextrous safety (as a southpaw, this is a must for me) as well as an integral flared and extended magazine well. The company’s new proprietary tritium sights (designed and developed by Meister), made up of a large dot front and a notch rear with a single dot and flat-faced ledge for one-hand racking of the slide, was another modern enhancement for the pistol that I felt was a good choice.

Now, with a streak of modern-style features and enhancements selected for my pistol, I decided to head back into the esoteric realm by selecting elephant ivory grips. I felt these would attractively complement the casehardening on the pistol and really help make the pistol stand out from the crowd.

Full disclosure here (and something that is probably becoming quite apparent by now): My tastes in 1911s are often pulled in two different directions. I like traditional materials, such as natural grip materials and leather holsters, but I have learned to appreciate modern upgrades and enhancements through having attended self-defense training courses at places like Gunsite Academy. I want a gun that can appeal to yesterday’s tastes in terms of materials and construction but still be a capable “gunfighter” for everyday carry.

Having put in my order and waited the several months (three to five months is the current officially stated wait time for a new order), I was happy to hear that the Republic Forge 1911 had arrived at my local FFL shop. Jeff dropped me a note letting me know that Ryan had built the gun I received.

Upon arriving at home and opening the box and the Republic Forge-branded Elite Survival Systems zippered case, I found an amazing-looking 1911 pistol. The color casehardening is, in a word, beautiful. It has a swirling, tiger-stripe pattern over most of the pistol, with the patterns from the frame to the slide matching impressively well. The casehardening was also applied to the extended and flared magazine well and the extended beavertail grip safety. A deep blued finish on the controls (extended magazine release, safety, slide release and “Texas Star” hammer) set off the casehardening nicely, and the elephant ivory grips are attractive and extremely well fitted. The frontstrap features 25-lpi checkering, with 20-lpi checkering on the mainspring housing. A light-diffusing strip of serrations runs along the top of the slide. The pistol came packed with two eight-round Tripp Research CobraMag stainless steel magazines.

The fitting of this Republic Forge 1911 is, pardon the overused phrase, tight as a drum. The slide-to-frame fit exhibits practically no side-to-side play, and the “tri-cavity” trigger breaks at a very clean 5.75 pounds. (All Republic Forge pistols have Series 70 mechanisms with no firing pin safeties). The pistol came with a 4150 steel Kart National Match barrel that was fitted snugly with no downward movement on the hood portion with the slide fully in battery. During my earlier conversation with Jeff, he had explained that each pistol is hand-fitted by one gunsmith from oversized parts. It would appear that Ryan did an outstanding job on this sample and fully lived up to Jeff’s description of his capabilities. 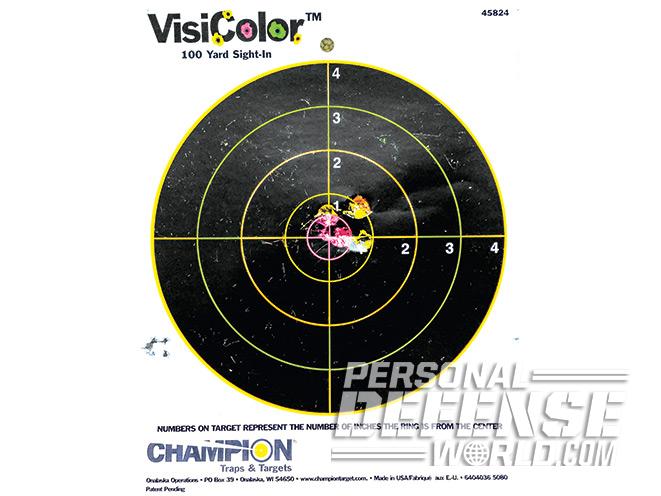 I took the custom Republic Forge 1911 out to the range with a selection of Federal, Speer and Hornady ammunition and set up at the 25-yard line with a pistol rest. As I began to put the pistol through its paces, I did note that the left-hand side of the ambidextrous safety required a good amount of force to overcome the spring-loaded plunger on the other side, but it appeared to start wearing in with use. The pistol was very accurate with all three of the loads I tested, creating five-shot groups in the roughly 1- to 1.5-inch range at 25 yards, with a “best” group of 0.9 inches with the Federal ammo. The test target that came with the pistol showed a tight 0.55-inch three-shot group at 15 yards. The pistol ran without a hiccup short of one failure to feed early in the test (I suspect it was simply part of the break-in process). I also ran it through some drills from my Milt Sparks Summer Special 2 holster.

Thanks to the efforts of Ryan Wells and Republic Forge, I now have a very unique and—judging by the reactions of those who’ve seen the pistol—eye-catching 1911 to add to my collection. This Republic Forge 1911 is truly a carry-ready pistol that can easily double as a collectible heirloom piece. Now I just have to decide which way I will head with it!