When my home state of North Carolina first began issuing CCW permits, my handgun of choice was an all-steel Commander. For a short time, that is. Like many who live in warmer climes, I discovered that carrying a pistol that was nearly 8 inches long and weighed 36 ounces under the light clothing necessary in our humid spring, summer and early fall seasons was inconvenient and pretty uncomfortable.

I switched to an Officer’s Model 1911 for a while but disliked its lower magazine capacity, and, with its shorter grip frame, I never did shoot the darn thing that well. Then the “polymer revolution” hit the handgun world, and over the years I’ve used a number of “plastic” pistols for CCW. But I missed carrying a 1911, and whenever the weather allowed me to wear heavier clothing I would switch back to my 1911. But that of course led to another CCW conundrum.

I will no doubt be castigated by hardcore 1911 fans when I say this, but when I carry, I want to carry a pistol that holds more than eight rounds of ammunition. Because of this, whenever I used a 1911 for CCW, I always carried a spare magazine, which only added to the bulk and inconvenience. Whereas the polymer-framed pistols I used held anywhere from 13 to 19 rounds of ammunition. 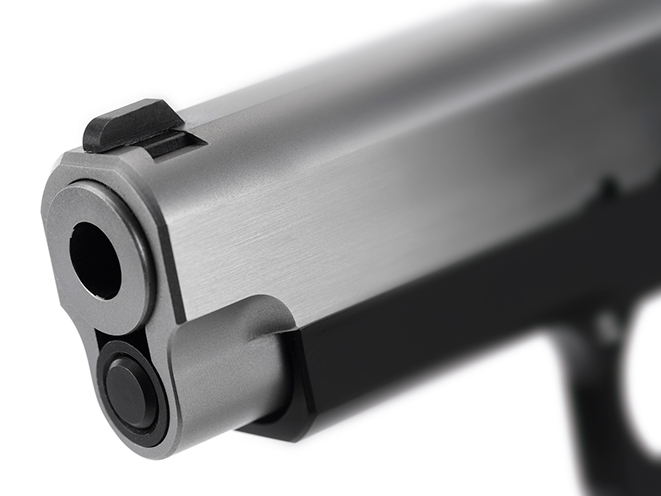 And let’s get one other contentious point out of the way. While I admire the .45 ACP cartridge, it is large and heavy, as are most of the handguns that fire it, and its size restricts magazine capacity. Over the years, I became a fan of the 9mm, and today it is my favorite centerfire handgun cartridge. Thanks to advances in propellants and bullet design, the 9mm no longer has to take a backseat when it comes to on-target performance.

All that being said, today my preferred carry gun is a lightweight, compact 9mm pistol what holds a minimum of 12 rounds of ammunition, and if it could be a 1911-style gun, that would be a big bonus. Well, I finally found such a pistol—the new STI Guardian 2011.

As its name indicates, the Guardian is built on STI’s hybrid 2011 modular frame. The upper assembly is made from lightweight aluminum and contains the rails and dust covers that supply weight up front, where it does the most good to dampen muzzle flip. 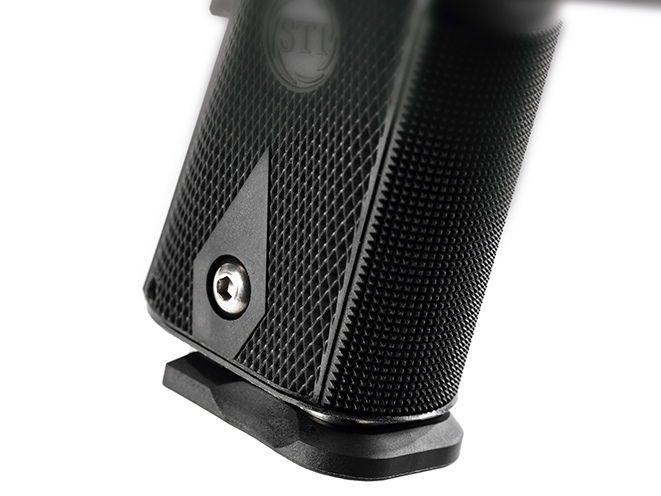 The frame’s lower assembly is made from glass-filled nylon, which keeps the grip narrow allowing the use of double-column magazines while still keeping its girth suitable for those shooters with smaller hands. The lower grip assembly has metal panels molded into it for metal-to-metal contact with the upper frame and contains a skeletonized match trigger, while the frontstrap, mainspring housing and the front edge of the recurved triggerguard are aggressively checkered.

The pistol also has a beavertail grip safety with a palm swell and a single-sided, extended thumb safety. Unlike the earlier single-stack Guardian pistol, the 2011 version’s double-stack magazine holds a very comforting 15 rounds of 9mm ammunition. With a round in the chamber, that is double the capacity of most single-stack 1911 pistol, which, for most purposes, negates the need to carry a spare mag.

The STI Guardian 2011’s side is made from stainless steel with an attractive semi-matte finish. Dovetail cuts at either end are filled with a square blade with a white-dot front sight while the rear sight is a fully adjustable TAS sight, again adorned with white dots. The ejection port is lowered and flared for reliable ejection of spent cases, and the square-cut grasping grooves at the rear of the slide provide a non-slip purchase for reloading or clearing any possible malfunctions. 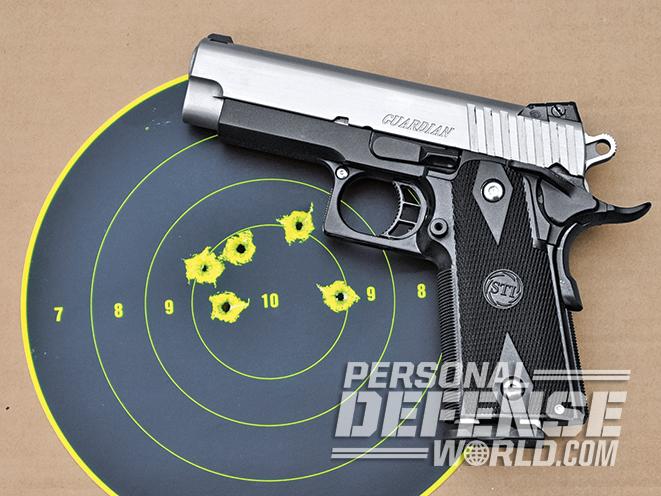 My wife, Becky, and I put the STI Guardian 2011 through its paces. Accuracy testing was performed from an MTM K-Zone rest at 15 yards, and after a few turns of the windage screw on the rear sight, I was soon producing well-centered groups, the majority of which measured under 2 inches in size.

Lately, to gauge the off-hand qualities of the pistols I test, I’ve been running them through a modified “El Presidente” drill, as it requires drawing the pistol and firing multiple shots on each target, transitioning between targets, performing combat reloads and reengaging (smaller) targets as quickly as possible.

I began with my back to three IPSC targets and hands raised above my shoulders. Upon a signal, I turned, drew the pistol and double-tapped (fired two shots) on each target. I then performed a combat reload and reengaged the trio of targets with one headshot each. I repeated this drill six times, and each “head” had a half dozen 9mm holes in it.

Since I was shooting an STI pistol, it’s probably not really necessary to state that we did not experience a single malfunction in the several hundred rounds we ran through it that afternoon. Not too bad a performance for the first time with a new, out-of-the-box pistol, eh? The STI Guardian 2011 did everything I asked for from a lightweight, compact 1911 pistol. And did it damn well.