"Nighthawk Custom of Berryville, Arkansas, is well known for building some of the finest custom 1911 pistols to ever launch bullets downrange."

If I were to ask you what the best single-action combat pistol ever devised was, what would your answer be? I have no doubt that many of you would instantly respond, “The 1911!” Well, at the risk of starting an all-out war with some of our readers, I must disagree. While the 1911 pistol was indeed a revolutionary, innovative and excellent design, it was still a machine, and anything mechanical can be improved upon. So my vote for the best single-action combat pistol goes to the Browning Hi-Power, like this one from Nighthawk Custom.

John Moses Browning was one of those rare natural geniuses who, when faced with a problem, idea or theory, sat down with a piece of metal in one hand and a file in the other and came up with the most successful firearm designs in history. In 1897, he offered a .32-caliber semi-automatic pistol to Fabrique Nationale (FN) of Herstal, Belgium, who purchased the rights to it. Introduced as the Pistolet Browning Modèle 1900, its popularity was such that “Browning” became synonymous with “pistol” in many parts of the world. Over the next two decades, Browning designed a series of semi-auto pistols for FN, all of which were commercial successes.

FN had Browning design a 9mm pistol for French army trials in 1921. In short order, he presented a pair of functioning single-action, striker-fired designs. One was blowback operated while the second utilized a variation of the 1911 locking system. Instead of the barrel unlocking by the articulation of a link, a cam on the bottom of the barrel pulled it downward to unlock it from the slide during recoil. Secondly, despite his reported opposition to the concept, the pistol used a double-column, 15-round magazine.

The French turned down the pistols, and Browning returned to FN—where the workers referred to him as le Maître (the Master)—until his death in 1926. FN appointed Dieudonne Saive as the engineer in charge of the pistol program. Saive, who would become FN’s chief engineer, combined the best features of Browning’s prototypes, the 1911 and a number of his own ideas into an entirely new 9mm handgun.

Saive replaced the striker with an external hammer and used a slide stop, magazine catch and thumb safety similar to the 1911’s. In place of a grip safety, Saive incorporated a magazine disconnect that prevented the pistol from firing when the magazine was removed. The stirrup-type trigger used on the 1911 was replaced with a connecting bar that released the hammer when activated by the trigger. To reduce weight, the magazine capacity was lowered to 13 rounds.

The finalized version was introduced in 1935 as the Pistolet Browning Grande Puissance (“Browning High Power Pistol”), which is often abbreviated to simply “Hi-Power.” While Saive’s pistol had digressed quite a ways from Browning’s original design, FN’s decision to attach Browning’s name to it helped guarantee its success. Before World War II, it was adopted by more than a dozen armies. During the war, the Germans used pistols made at the captured FN plant while the Allies used Hi-Powers made by the John Inglis company of Canada.

After WWII, the Hi-Power became the most popular military pistol outside the Soviet bloc, and it’s still in production today. In fact, many credit it with the worldwide popularity of the 9mm Parabellum cartridge. While some of its fans considered the Hi-Power as the perfect single-action combat pistol just as it was, others felt that further improvements were needed. Specifically, its sights were rather small, the safety lever was difficult to manipulate, the grip tang was too short and the magazine safety had a deleterious effect on the trigger pull. While FN corrected some of these problems over the years, others have remained. 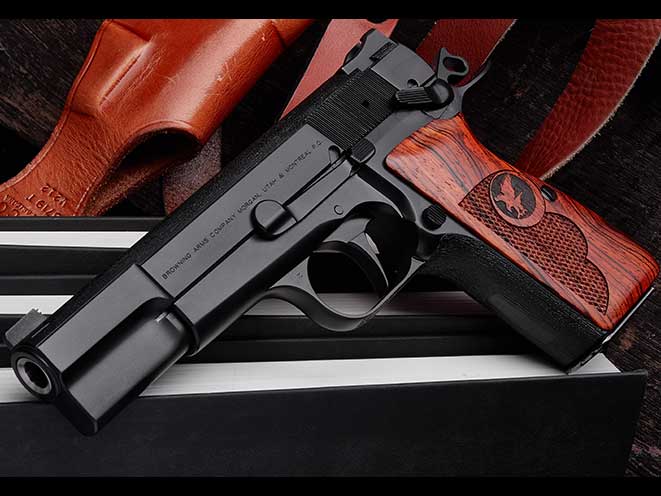 Nighthawk Custom of Berryville, Arkansas, is well known for building some of the finest custom 1911 pistols to ever launch bullets downrange. The company’s trademark “One Gun, One Gunsmith” motto says it all. Each pistol is built from beginning to end by the same gunsmith, who then stamps his initials into the frame, under the left grip panel.

Seeing the growing popularity of the 9mm cartridge, Nighthawk began offering a number of its 1911s chambered for Georg Luger’s legendary cartridge. But the company came to the realization that if it was going to offer pistols in 9mm, why not offer the most popular 9mm pistol in the world? Thus, the Nighthawk Browning Hi-Power was born.

Like what you’re reading? Check out the rest of this article in ‘Handguns Buyer’s Guide’ 2017. For information on how to subscribe, please email subscriptions@outdoorgroupmags.com or call 1-800-284-5668.