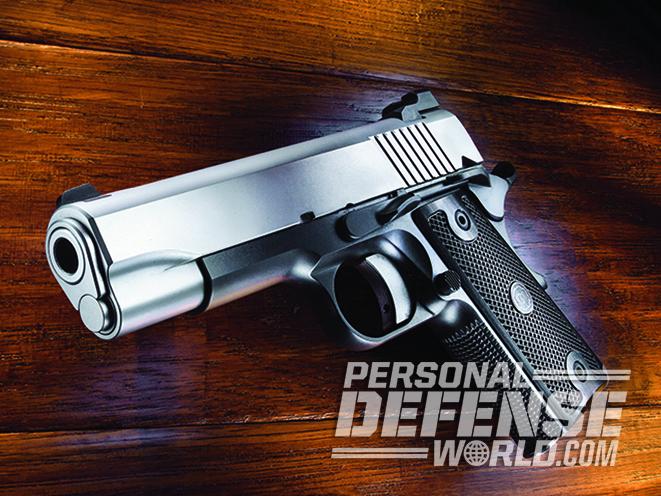 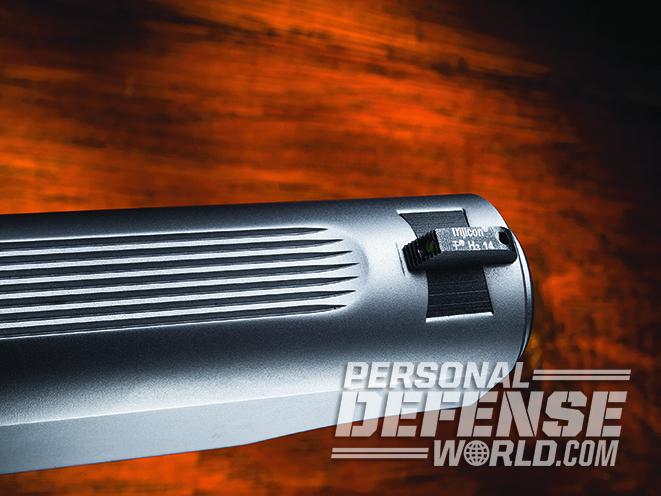 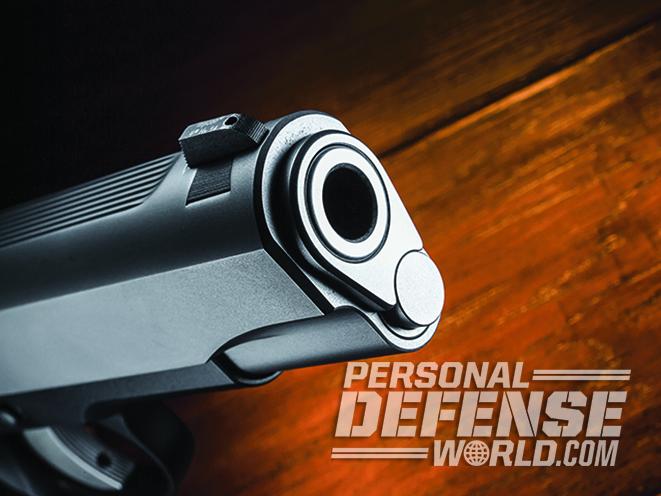 3 of 5
Guncrafter Industries CCO
Guncrafter utilized an extra-thick barrel bushing on the CCO for a tight fight. Also note the lack of forward cocking serrations. 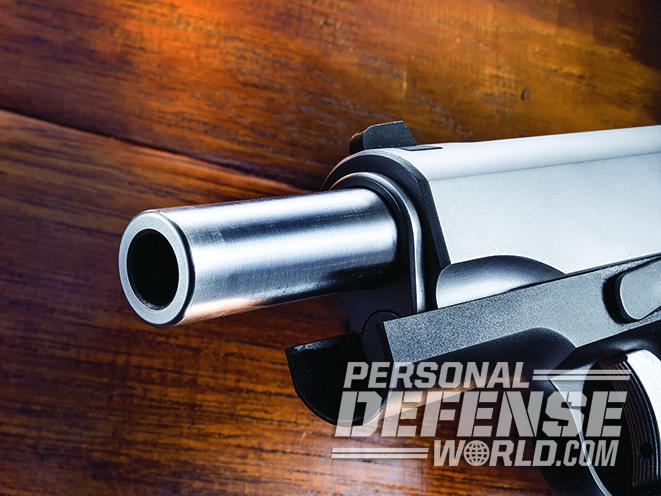 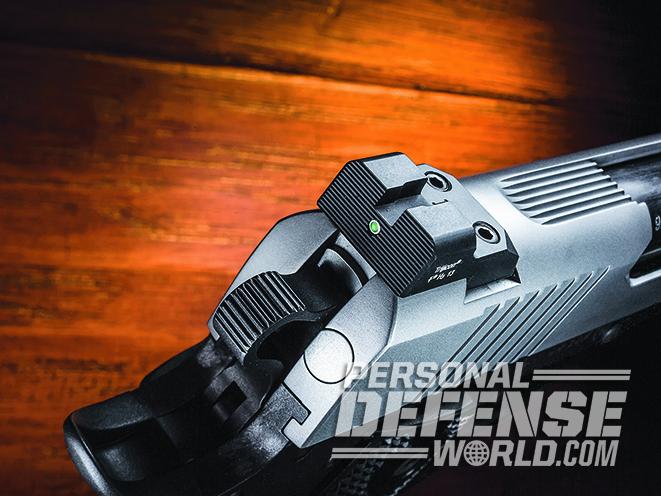 5 of 5
Guncrafter Industries CCO
The rear sight is a rugged GI night sight held in a dovetail with double setscrews, and it has a shelf for positive one-handed cycling of the slide. 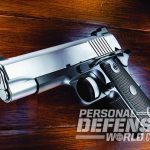 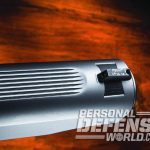 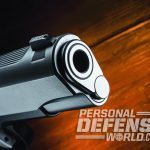 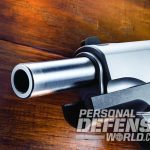 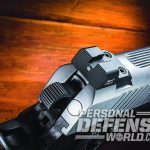 The word “custom” gets bandied about a lot in the world of guns, especially with 1911s. There are a few mass producers of the revered design with custom shops that put custom features or modifications on their base models. Some even offer custom models made to order according to a buyer’s specifications. But even these are made from mass-produced “off-the-shelf” components in most cases.

Every last one of the pistols made by Guncrafter Industries (GI) is a full-scale, hard-built custom. These pistols are made entirely of premium components, from their high-grade steel slides, frames and barrels to the internal parts machined from state-of-the-art steel and bar stock.

The Guncrafter CCO (Concealed Carry Option) was created to be GI’s premier pistol for concealed carry. In essence, it amounts to a Commander-sized slide and barrel on an Officer’s Model frame. The company’s founder and owner, Alex Zimmerman, settled on this arrangement for the enhanced concealability of the smaller grip frame with the reliable-running upper half of the Commander. He does not hold as much confidence for reliable functioning in the faster slide velocities of the Officer’s Model.

I’d tested three or four pistols from GI prior to this one, and found them to be impressive examples of superior work in gunsmithing. There was no reason to expect anything less from the Guncrafter CCO, and I looked forward to testing it.

When it comes to experience with 1911s, Zimmermann developed a strong interest in competitive shooting in his younger years, when he lived in Denmark, which required him to travel to the U.S. By the time he’d won the International Defensive Pistol Association (IDPA) Stock Revolver Championships seven times consecutively, he was living here. As such, he found it necessary to do his own custom gunsmithing, which led him into the firearms business to pay the bills as he earned his BA in mechanical engineering.

During one of his travels to the U.S., he met Bill Wilson, for whom he would work for eight years as the director of research and development at Wilson Combat, getting to know some of the country’s best gunsmiths in the process.

While studying for his engineering degree in Denmark, Zimmermann had envisioned a practical .50-caliber pistol on the 1911 platform, but the very strict laws on gun ownership in Europe made the project pointless. By 2002, he decided to make the design a reality and left Wilson Combat to start Guncrafter Industries. The .50 GI Model No. 1 was introduced early in 2004 and the Model No. 2 followed six months later.

The test Guncrafter CCO arrived in a padded hard case. A quick once-over revealed the pistol to be of outstanding fit and finish, with the aforementioned Officer’s Model rounded-butt frame and a tough-as-nails, matte black, corrosion-resistant Melonite finish. The pistol tipped the scales at only 33 ounces.

The bobbed frame is a machined 4140 chrome-moly forging that’s been treated to a carry bevel, and the magazine well is beveled for quick magazine changes. Custom features include 15-lines-per-inch (lpi), 90-degree checkering on the frontstrap and mainspring housing, with the bobbed contour being smooth. The mainspring housing is expertly blended to the frame, as is the high-swept grip safety with its memory bump. The single-sided thumb safety features an extended, serrated lever, and the checkered slide lock, machined from bar stock, is also slightly extended. The magazine release is slightly raised and serrated.

Also machined from a 4140 chrome-moly forging, the slide features deeply cut rear cocking serrations. The top of the slide is also serrated to eliminate glare. Extra-sturdy GI night sights are dovetailed in, and the rear sight features a pronounced shelf and double setscrews for positive one-handed cycling of the slide. The ejection port is lowered and flared, and the pistol uses a traditional internal extractor machined from hardened chrome-moly bar stock.

The heavy, match-grade, 4.25-inch barrel is cut from a 416R rifle-grade stainless steel forging. Button-rifled, it has six lands and grooves with a 1-in-16-inch, right-hand twist rate and an 11-degree crown. It is also fitted to a heavy-duty bushing with an extra-thick flange, and the chamber hood is marked with “GI 45 ACP.”

GI believes in a tight bushing for enhanced accuracy, and in my sample the bushing was so tightly fitted to the slide that I had to use a bushing wrench and tap it out with a nylon punch. Don’t think for a minute that the gunsmiths at GI took any shortcuts on this pistol.

Like what you’re reading? Check out the rest of this article in ‘Gun Buyer’s Annual’ 2017. For information on how to subscribe, please email subscriptions@outdoorgroupmags.com or call 1-800-284-5668. 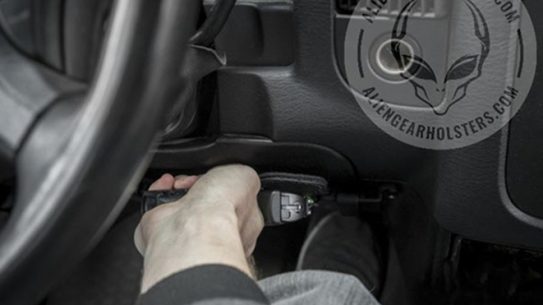 Safely and securely anchor your IWB holster to a desk, beside table, wall, vehicle...