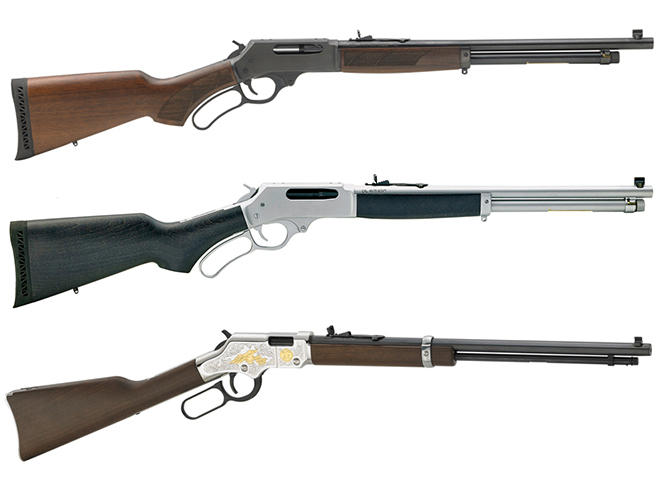 Fans of Henry Repeating Arms should be excited for the future, as the company has announced a ton of new models for 2017.

For more details on these new Henry Repeating Arms offerings, see the press release below.

The Henry Frontier Long Barrel 24″ debuts as a new addition to Henry’s popular rimfire rifles. The blued steel octagonal barrel is extended 4 inches from the 20 inches of its predecessor, the Lever Action Octagon Frontier Rifle. The extended barrel provides a longer distance between the front and rear sights, which seeks to improve accuracy. Another version of this Long Barrel rifle is debuting with a threaded barrel straight from the factory to accept a suppressor. The Lever Frontier Long Barrel 24″ is offered in two calibers: .22 S/L/LR Model # H001TLB, and .22 Magnum Model # H001TMLB. MSRP is $470.00 for the .22 S/L/LR model and $570.00 for the .22 Magnum version. The Lever Frontier Threaded is also being chambered in the same calibers: Model # H001TSPR in .22 S/L/LR with an MSRP of $502.00, and Model # H001TMSPR in .22 Magnum with an MSRP of $596.00.

Henry’s line of Tribute Edition rifles has expanded to introduce the Fraternal Order of Eagles Tribute and the Second Amendment Tribute rifles. The H0004FOE Fraternal Order of Eagles Tribute pays homage to the international non-profit organization that seeks to rectify social issues, boasts a membership of over 800,000 members, and has been in existence for well over a century. The American walnut stock features a laser engraved and hand painted logo of an attacking eagle and the nickeled receiver is embellished with various engravings including the F.O.E.’s slogan, “People Helping People,” highlighted in 24K gold plating. MSRP is $1,050.00. The H004SAT Second Amendment Tribute recognizes the NRA’s efforts to defend Americans’ rights to bear arms with detailed engravings highlighted in 24K gold plating on the nickeled receiver. MSRP is $1,020.00. Both of these new Tribute Edition rifles are built on the award-winning Golden Boy platform and chambered in .22 S/L/LR.

In addition to new calibers the Big Boy series is getting a new look with the utilitarian All-Weather finish. Hard chrome plating on the steel surfaces and an industrial-grade coating on the hardwood stocks provide a long lasting, extremely durable finish to battle the elements. The All-Weather Big Boy rifles will be available in three calibers: .357 Magnum/.38 Special Model # H012MAW, .45 Colt Model # H012CAW, and .44 Magnum/.44 Special Model # H012AW. All three models share an MSRP of $999.95.

The Henry Long Ranger was released in late 2016 and introduced three more calibers for hunters and shooters who need to take shots from further distances than a .30-30 or .45-70 will typically allow. The rifles are built with mounting a scope in mind, but for 2017 these three models are being offered with iron sights mounted. The sight system is a fully adjustable rear folding sight with an ivory bead front sight. Model # H014S-223 is chambered in .223 Remington, Model # H014S-243 is chambered in .243 Winchester, and Model # H014S-308 is in .308 Winchester. All three models share an MSRP of $1,014.95.

The classic Henry Original, based off the rifle built by New Haven Arms Company in the 1860’s and designed by Benjamin Tyler Henry is getting two new variations with one version being offered in .45 Colt and the other being a Rare Carbine model with a 20.4″ barrel. Expanding the Henry Original to include .45 Colt offers a more inexpensive ammunition choice for extended trips to the shooting range. This Model # H011C has an MSRP of $2,300. The Rare Carbine version shaves off about 4″ of barrel length and a half-pound of weight for a lighter, more maneuverable package that retains all the classic appeal of the others. The Henry Original Rare Carbine, Model # H011R has an MSRP of $2,300 as well.

For the first time in the company’s history Henry will now be offering a myriad of shotgun options. The H018-410 and the H018-410R indicate models numbers for the two new .410 bore lever action shotguns. The HO18-410 is the long version, with a 24″ round barrel, removable full choke from the factory, and a large front brass bead sight with no rear sight. This one provides slightly longer practical ranges with its barrel length and full choke, along with additional choke options sold separately. MSRP for the H018-410 is $902.

The H018-410R is another versatile and compact shotgun package featuring a 20″ round blued steel barrel, cylinder bore choke, and adjustable semi-buckhorn rear and brass bead front sights. This model is a little lighter than the larger H018-410, which makes it easier to tote over a long afternoon on foot, and the shorter round barrel works easier through brush and other tight terrain where shots are expected to be close and fast. The adjustable sights make it easy to regulate patterns with a variety of birdshot, buckshot, and slugs to handle anything from cottontails to coyotes. MSRP for the H018-410R is $850.

Henry is also pleased to introduce a series of single shot rifles. The centerfire single shot rifle has a long history among hunters looking for something accurate and dependable, and these break-action one-shooters aim to carry on that history. The initial offering will be available with a blued steel receiver or a hardened brass receiver. The steel models are chambered in .44 Magnum (H015-44), .45-70 (H015-4570), .223 (H015-223), .243 (H015-243), and .308 (H015-308) with a 22″ round blued steel barrel. The receivers are drilled and tapped for optional scope use and the semi-buckhorn rear sight and brass bead front sight provide am effective iron sight system. These models use a familiar locking lever on top of the frame, behind the external hammer spur to break open for loading and unloading. This lever can be pivoted left or right from its center position to unlock, which works well for both right and left-handed shooters. The action has no external manual safety; it uses a rebounding hammer that can’t touch the firing pin unless the trigger is deliberately pulled, and an interlock system that doesn’t allow the barrel to open if the hammer is cocked, or the barrel to close if the hammer’s cocked while it’s open. The MSRP for all of the steel models is $427.00. The hardened brass versions are chambered in .44 Magnum (H015B-44) and .45-70 Government (H015B-4570) and share an MSRP of $549.

Building off of the lever action shotguns and the single shot rifles are the new single shot shotguns that will be available in both a hardened brass and steel frame. They’re built on the same actions of the single shot rifles but are chambered for 12 gauge, 20 gauge, and .410 bore. All three options have removable chokes; the 12 and 20 ship with a modified choke and the .410 ships with full choke. Brass bead front sights are standard and the barrel length is 28″ for the 12 gauge and 26″ for the other two gauges for good reach in the field. The length of pull is 14″ on all three with the brass models using a straight stock and the steel models using a pistol grip stock. The MSR prices for the 12 gauge (H015-12), 20 gauge (H015-20), and the .410 (H015-410) is $427.00. The brass models have an MSRP of $549. 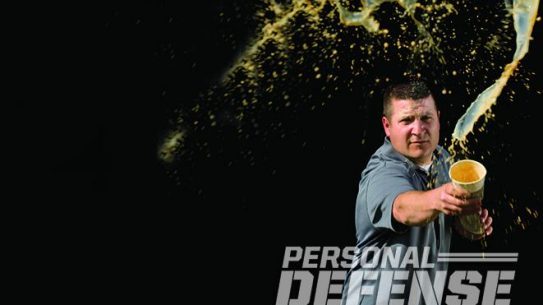 Improvised Weapons: Protect Yourself In A Crisis

If we have no other options, improvised weapons easily conform to the principle that...