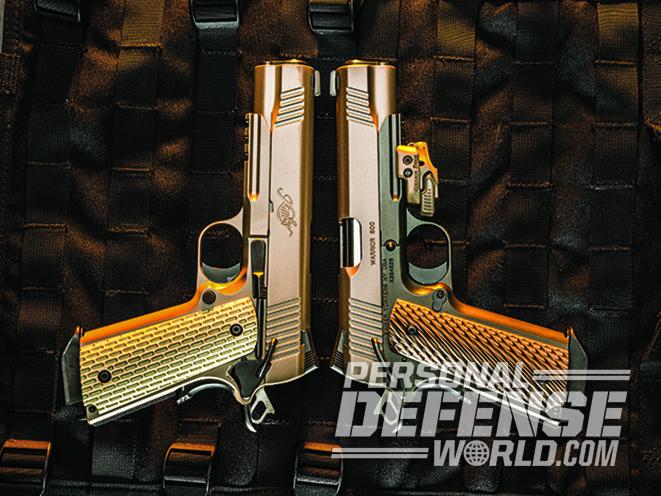 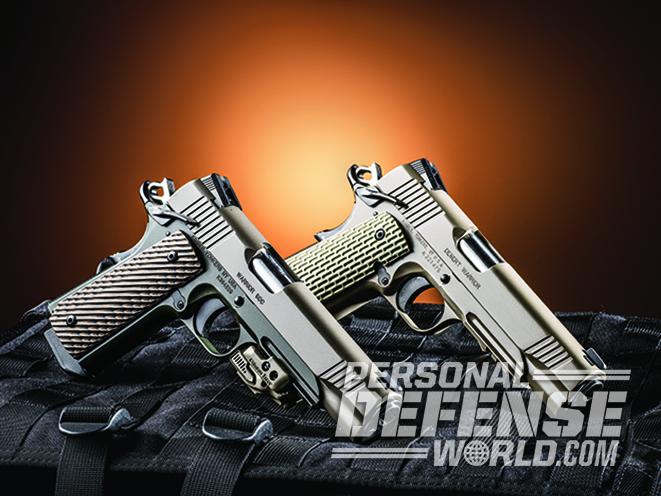 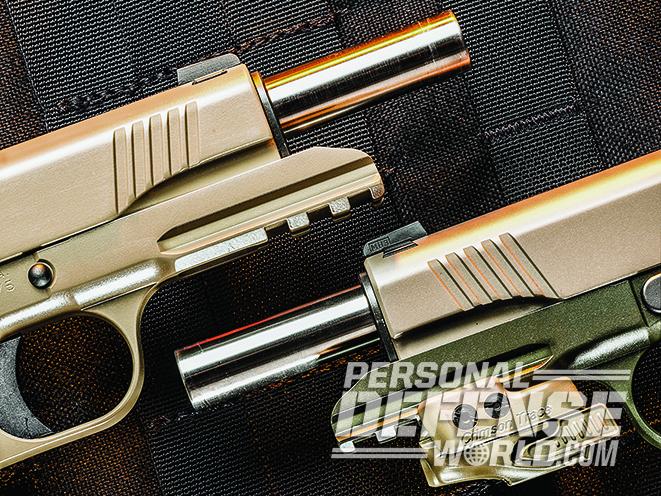 3 of 7
Kimber 1911s: The Desert Warrior and Warrior SOC
“…while these pistols aren’t exactly the same as the ICQB, they’re built with the same basic specifications and an eye toward 100-percent reliability in all conditions.” 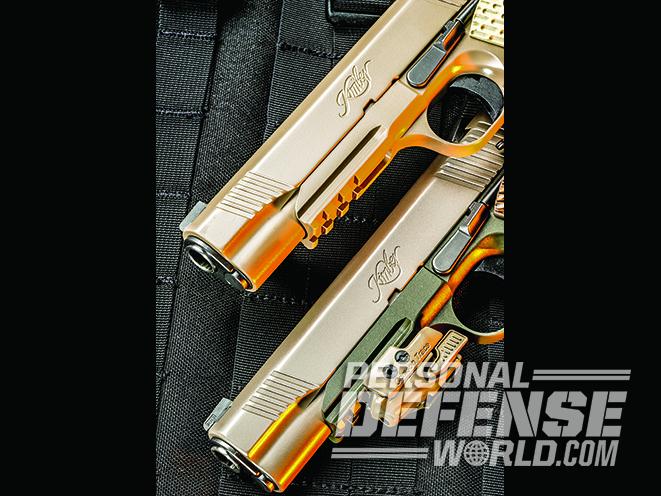 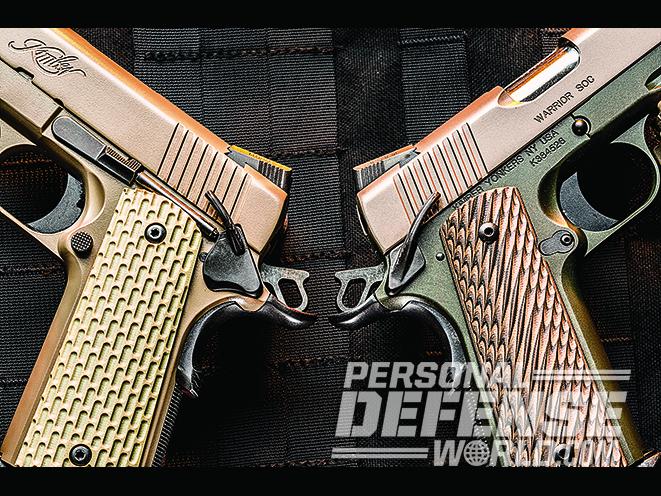 5 of 7
Kimber 1911s: The Desert Warrior and Warrior SOC
Each pistol has an ambidextrous thumb safety, a skeletonized hammer, an extended beavertail grip safety with a “memory bump” and a solid aluminum trigger set between 4 and 5 pounds. 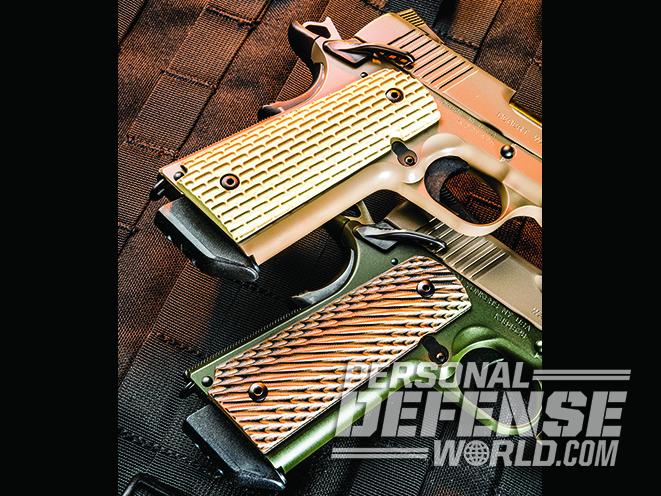 7 of 7
Kimber 1911s: The Desert Warrior and Warrior SOC
In testing, the TFS variants were easy to handle and fast on target. Neither one missed a beat when it came to shooting one-handed, quickly transitioning from an empty rifle and other real-world drills. 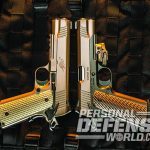 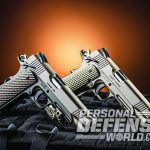 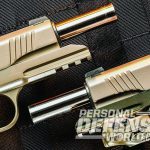 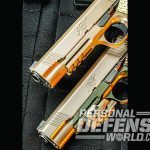 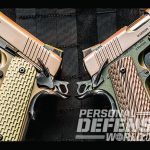 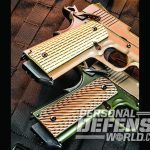 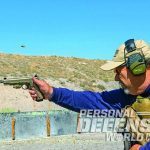 Working at the request of the U.S. Marine Corps Forces Special Operations Command (MARSOC), Kimber designed a .45-caliber 1911 that would officially be named the Interim Close Quarter Battle (ICQB) pistol. As specified by our most elite Marines, this pistol was built to the highest standards using top-quality parts so it could withstand harsh conditions. Kimber then unveiled its line of Warrior 1911s to the public, and while these pistols aren’t exactly the same as the ICQB, they’re built with the same basic specifications and an eye toward 100-percent reliability in all conditions.

Both of these pistols start with steel slides and frames that have been expertly “melted” for snag-free carry. There are no sharp edges to catch on clothing or gear. Each pistol also has a smooth yet tight slide-to-frame fit. Both pistols also feature slides with front and rear serrations as well as desert tan KimPro II finishes.

The Desert Warrior has this same finish applied on its frame, but the Warrior SOC’s frame features a dark green KimPro II finish. Both frames feature smooth frontstraps, checkered mainspring housings with lanyard rings and flared magazine wells. The Desert Warrior comes with tan G10 grip panels while the Warrior SOC’s are dark brown, and they differ slightly in terms of texturing. The pistols also have dust-cover Picatinny rails for adding accessories. Their controls, including the ambidextrous thumb safeties, triggers and grip safeties, are black.

I was lucky to get my hands on Kimber’s “Threaded For Suppressor,” or TFS, variants of the Desert Warrior and Warrior SOC. These models come with 5.5-inch, stainless steel, match-grade barrels with .578×28-tpi threading, which will work with most standard .45 ACP sound suppressors. Knurled thread protectors are included.

The triggers on my test pistols were solid aluminum, match-grade units set between 4 and 5 pounds. As you can see, both pistols are similar in form with just a few differences in terms of color and accessories.

At the range, my first task was seeing how the pistols functioned using a box of magazines and several types of FMJ and self-defense ammunition. I used a few Chip McCormick eight- and 10-round Power Mags, various Wilson Combat mags, ACT mags and the factory Kimber mags. All of the magazines functioned flawlessly in both of the pistols. I ran the guns hard during a few range sessions, firing several hundred rounds without a single malfunction.

Every Kimber 1911 I’ve tested, regardless of size, has been very accurate, and these pistols weren’t exceptions. The Desert Warrior (TFS) produced the best group, which measured 1-inch wide at 25 yards, with Federal’s 230-grain HST ammo. Some vertical stringing indicated some unsteady breathing, so the gun is likely more accurate than I can shoot it. Both of the pistols created groups measuring 1.5 inches or less at 25 yards.

I primarily tested the Desert Warrior (TFS) with a SureFire X300 light or X400 light/laser combination unit mounted on the rail. I left the Crimson Trace laser on the Warrior SOC (TFS). To carry the pistols on my chest rig or duty belt in a deployment-style setup, I used Safariland ALS holsters. I also ran the pistols from a few Kydex concealment holsters.

Drawing from concealment, the Warrior SOC (TFS) was fast and smooth, even with its extended barrel and taller sights. The carry “melt” treatment really proved its worth, with just the right amount of beveling and smoothing where needed. My custom pistols have just enough smoothing to make them snag-free, and the Warrior SOC (TFS) was similar. Working in and out of the holster was easy, and my draws were smooth and fast. The SOC carried comfortably during a long day at the range and stayed put throughout some pretty harsh testing.

Next I carried the Desert Warrior (TFS) on my Survival Armor Warrior vest with either the X300 or X400 attached. Mounting the SureFire units was simple, and I added a DG switch to the grip to instantly activate each light every time I gripped the pistol. Simply tighten your grip and come up on target, and the light is activated. When you come back down, you can release it pretty easily. This makes it easy to operate the pistol with just one hand, which can be a lifesaver in an emergency situation. After a little practice to get used to this setup, you’ll want to use it on every gun.

I wasn’t used to working with a pistol mounted in a cross-draw position on my vest, just above some magazines, but I got used to it quickly, and it’s very popular with the SMU guys I’ve talked to. When you’re using a rifle as a primary weapon, you’ll carry your pistol more than you use it. That’s why its positioning is so important. As a larger guy, having anything mounted to my thigh is just cumbersome and clunky.

With a little practice, you can quickly draw your pistol from this position, either on its own or transitioning from a rifle. I used my PWS MK107 SBR and a full-sized AK-47 for this portion of the evaluation, and the Desert Warrior (TFS) never got in the way or interfered with the slings. You mostly have to be careful not to cover yourself when you reholster the gun, but it was secure.

Testing the Warrior SOC’s Crimson Trace laser was a little problematic in daylight, but I could still see the green dot as far back as 10 yards. Holding the pistol in a low-ready position and pointing it upward, I could easily hit a target 7 yards away. In my world, lasers are close-range aiming aids, and this one worked perfectly. The laser also made it easier to fire from the ground, where using the sights is difficult, and get tight groups. The Rail Master itself is pretty small, and it can be turned on and off as needed. As with any electronic device designed to assist in aiming, make certain you practice without it. But for fast, accurate shooting where sighted fire is not possible, it was excellent.

Switching back and forth between pistols was pretty seamless since they are mostly identical—even the trigger pull was the same. Sighting was similar, as both had the same sights. The ledges on the rear sights are also prominent enough to perform almost any malfunction drill using a wall, barricade or other hard edge without getting in the way. Even without sound suppressors mounted, these pistols were extremely practical for most duty uses.

Kimber’s Warrior SOC and Desert Warrior are solid, reliable 1911s. Like all Warrior pistols, they’re built to be incredibly rugged and reliable, and to withstand very harsh conditions. These proved to be 100-percent reliable and very accurate at the range. The laser adds another dimension of versatility when attached to the Warrior SOC, and the fact that you can simply remove it without affecting your grip or the pistol’s functioning is a huge asset.

Both of these pistols offer great looks and performance to match. In all, they are well suited for personal and home defense or any duty use where you might need a full-sized 1911. Being able to add a sound suppressor is a bonus.

This article was originally published in ‘Combat Handguns’ February 2017. For information on how to subscribe, please email subscriptions@outdoorgroupmags.com or call 1-800-284-5668. 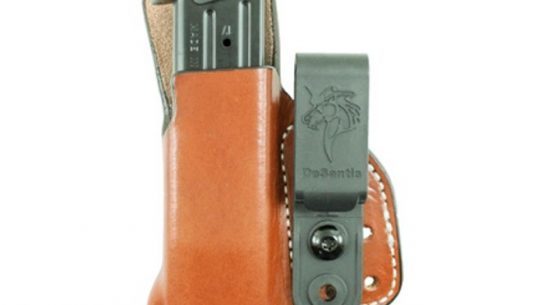