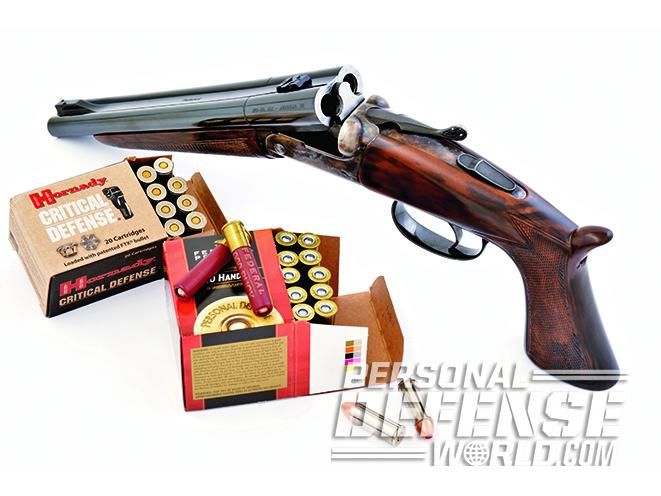 1 of 8
Pedersoli Howdah 45/410
Tearing a page from the past, Pedersoli’s new Howdah recreates the legendary double-barreled defensive shotguns of the 1920s, but in a classically styled package capable of firing .45 Colt rounds and .410-gauge shotshells. It’s the ultimate one-two punch for today’s shooters. 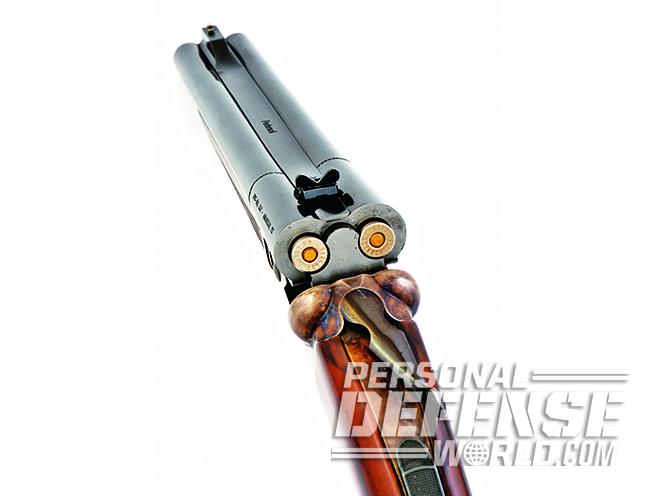 2 of 8
Pedersoli Howdah 45/410
The Pedersoli has a sliding thumb safety similar to those used on side-by-side shotguns so you’ll always know what condition the pistol is in. The rear sight works well for both .410 shells and .45 Colt rounds. 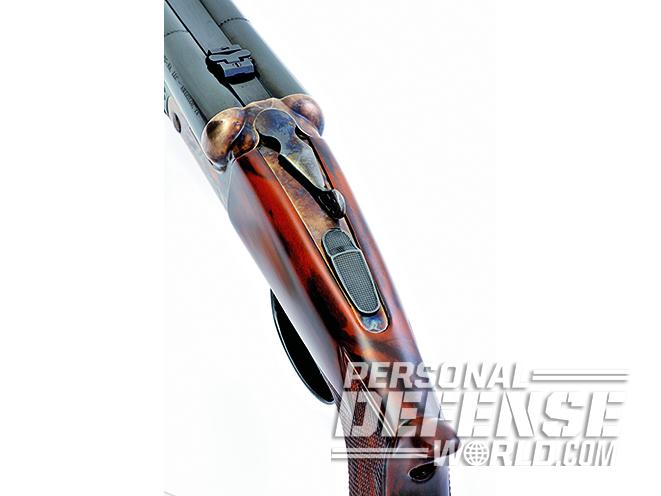 3 of 8
Pedersoli Howdah 45/410
The Pedersoli has a sliding thumb safety similar to those used on side-by-side shotguns so you’ll always know what condition the pistol is in. The rear sight works well for both .410 shells and .45 Colt rounds. 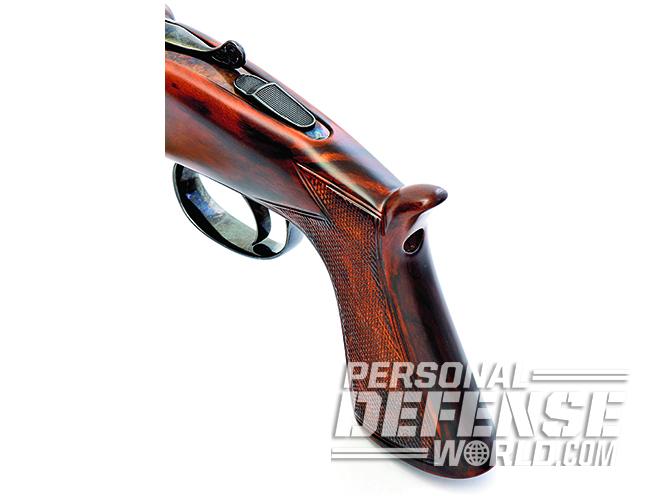 4 of 8
Pedersoli Howdah 45/410
The walnut pistol grip’s angle and spur keep the Pedersoli centered in the web of the shooting hand with heavy-recoiling rounds. Also note the subtle checkering. 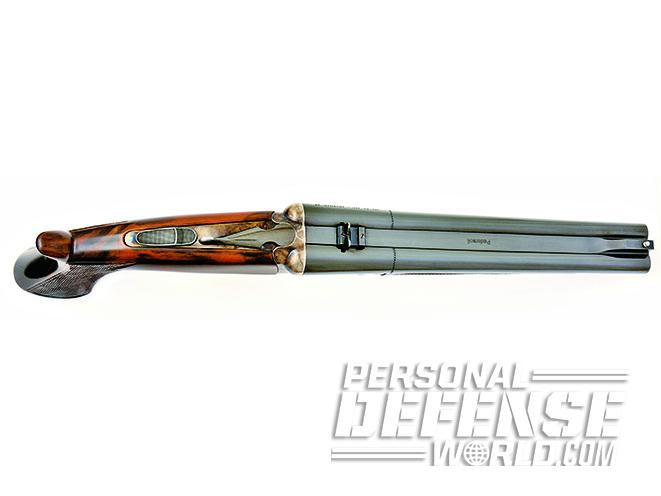 5 of 8
Pedersoli Howdah 45/410
The tang-mounted, shotgun-style lever opens the action for quick, efficient reloads. The Pedersoli’s elegant early 20th century lines evoke a look of the past combined with modern construction techniques and durability. 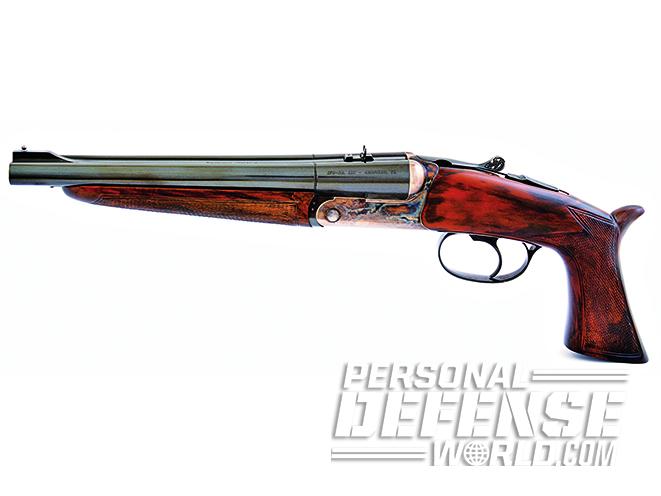 6 of 8
7-pedersoli-howdah-double
Weighing 4.1 pounds unloaded, the Pedersoli Howdah has the heft to handle modern high-velocity rounds. The single, non-selective trigger has a light 4.2-pound pull on average. 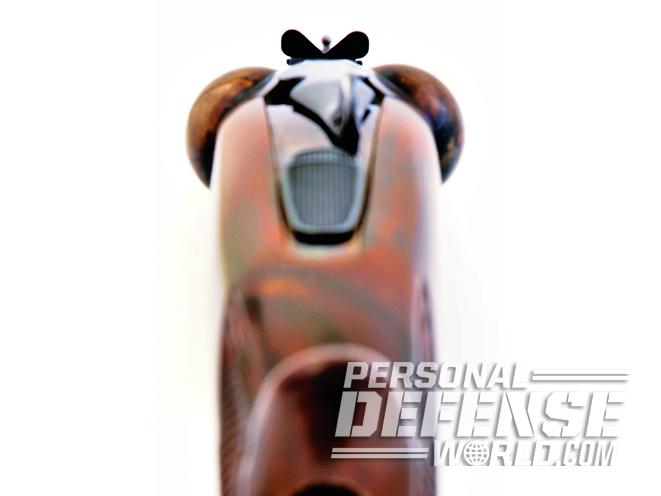 7 of 8
Pedersoli Howdah 45/410
The sights consist of a tall front bead and a folding leaf-style rear sight. 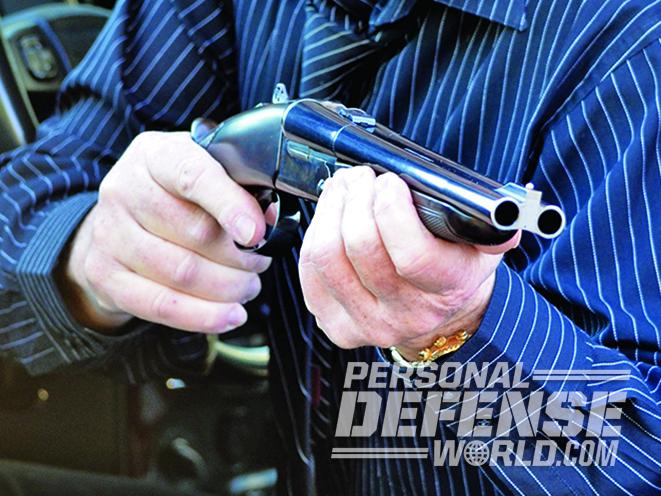 8 of 8
Pedersoli Howdah 45/410
As a defensive weapon for personal protection in close quarters—like inside a vehicle, for example—the double-barreled Pedersoli Howdah pistol fulfills the same role in the 21st century it served nearly a century ago 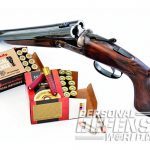 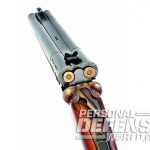 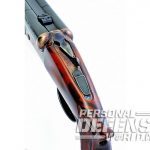 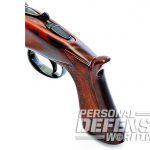 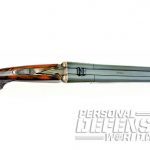 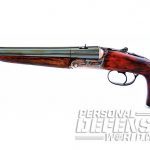 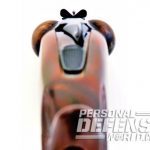 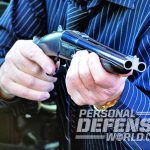 The new Pedersoli Howdah double pistol is an historic design with a lineage that dates back to late 19th century Europe and the development of the first Howdah-style double-barrel pistols for big-game hunters. In America, the handful of Howdah-style percussion pistols and later cartridge pistols, both side-by-side and superposed, that found their way to our shores were quickly copied by gunsmiths as well as those with little more than a hacksaw and an idea. A real Howdah pistol, however, was a far more elegant sidearm, as is this new Pedersoli .45/410.

The design is based on the 10-inch-barreled Flues Model, the break-open, double-barrel pistol introduced by Ithaca in 1922 and manufactured through 1925. The most important difference is that the Pedersoli has rifled barrels and is chambered in .45/.410. The grip shape is nearly identical to the early Ithaca models, including the integrated spur to stabilize the gun in the hand during recoil, a design seen on many European Howdah pistols.

The Pedersoli also uses a sliding thumb-operated safety and a break-open lever like a shotgun. But the pistol has a slightly longer wrist than the original Ithaca’s, thus increasing the length of reach to the trigger. It was also decided to use a single, non-selective trigger for the Pedersoli, firing the barrels sequentially right and left, rather than dual triggers.

Another change is the addition of a folding rear leaf sight to allow better accuracy with .45-caliber cartridges and .410 slugs. The vast majority of original smoothbore Ithaca models were chambered in 20 gauge, although other gauges were produced, including approximately 20 in .410 gauge like the Pedersoli.

Ithaca built 4,500 of the double-barrel smoothbores under the “Auto & Burglar” name in two models, the elegantly styled first version, also referred to as the Model A, and the circa 1925 to 1934 New Improved Double (NID), or Model B, which had a revised pistol grip design, longer 12.2-inch barrels and chambers that fit 2¾-inch shells. The Model A was chambered for 2½-inch shells, as is the Pedersoli. Around 1,500 of the NID versions were sold through 1934, the year the National Firearms Act (NFA) was implemented, which brought an abrupt end to Ithaca’s production of the Auto & Burglar models.

The Pedersoli Howdah .45/410 has rifled barrels and is thus not subject to NFA restrictions. It is actually more akin to the late 19th century Howdah pistols made famous by Holland & Holland and James Purdey & Sons, among others. The Pedersoli’s integrated, hammerless box-lock action is based on the Anson and Deeley design developed in 1875 for the Westley Richards Company.

The silver, welded barrels use a monobloc with two lugs and a horizontal wedge inserted on the frame that fits inside the lugs when the action is closed. The Pedersoli Howdah’s splinter forend and pistol grip are handsomely hand-checkered while the receiver and tang are color-casehardened, and the barrels, triggerguard, trigger, lever and checkered safety are blued. The 10.25-inch barrels have a broad center rib to allow for the folding rear leaf sight and a ramped silver-dot front sight.

From a 1920s point of view, being on the wrong end of a double-barrel pistol was one place a criminal did not want to be. An old Ithaca advertisement about the Auto & Burglar’s use stated that “Detective Harry J. Loose…first induced the banks in and around Chicago to use it, then its use spread to sheriffs, police departments, paymasters, watchmen, express messengers, and it’s a wonderful home protector.”

Indeed, with today’s excellent .45-caliber personal-defense rounds like Hornady’s 185-grain Critical Defense FTX pistol cartridges, and the option of loading one of many .410-gauge 000 buckshot and personal-defense loads like Winchester’s PDX1 Defender (combining a dozen plated BBs with a trio of plated “defense discs”), the concept of the Howdah and old Ithaca double pistols still works in the 21st century.

Like what you’re reading? Check out the rest of this article in ‘Combat Handguns’ February 2017. For information on how to subscribe, please email [email protected]outdoorgroupmags.com or call 1-800-284-5668. 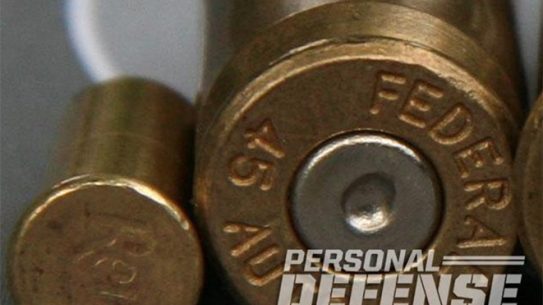