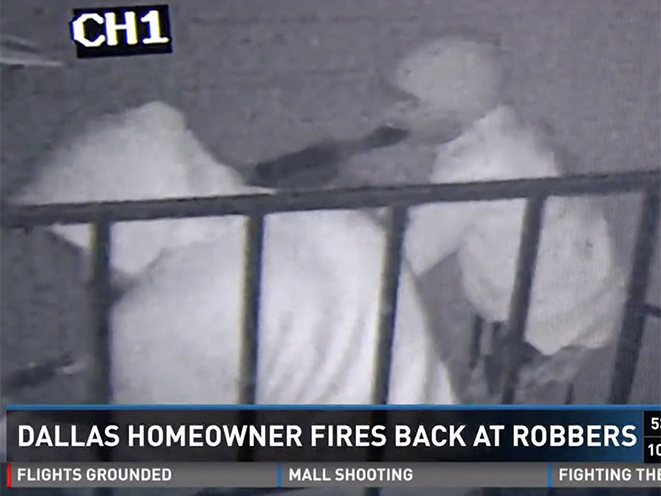 An armed Dallas homeowner fought back against a pack of would-be home invaders early Saturday morning.

Terry Morgan was asleep at his home in the Oak Cliff neighborhood when he was jarred awake by a suspicious noise at his front door.

Startled, he went and looked at the monitor on his home surveillance system and two men standing on his front porch, one of whom was armed with a rifle, while the other was using a crowbar to try and pry the door open.

Morgan immediately grabbed his shotgun, laid down on his living room floor and aimed his firearm at the front door in anticipation of the bad guys coming in.

“He was aiming pretty low, so I had to be lower than him, so I just wanted to make sure when he got the door in that I got the first shot out,” Morgan told a CBS affiliate.

The two suspects didn’t enter the home, however. Instead, they moved out of camera view towards the side of the house.

Wanting to get a better look at the suspects, Morgan got up and looked out the window, making a noise in the process that got the attention of the bad guys.

The suspects shot at Morgan, who then opened his front door and returned fire.

The would-be home invaders fled the scene in a vehicle parked near Morgan’s home.

Right now, Dallas police are looking for three suspects: the two home invaders and another woman seen knocking on Morgan’s front door right before the other two appeared on camera. There could be more people involved in this crime; Morgan says he saw five people get into the car and speed off.

“I don’t want to shoot anyone’s kid. What are you doing riding at 4:30 in the morning, tyring to break into somebody’s house. You are going to get killed,” Morgan told a local Fox affiliate.

“Had you killed me, or I killed you, one of our families would’ve changed. And it would’ve taken a long time for everybody to get back to normal,” he said.

The bottom line? Don’t try and break into people’s homes. You never know who could be waiting.

“Over here, we have nothing. You’re taking from people who have nothing. We’ll fight for everything, every last inch. Find something better, educate yourselves, get something you can do better than breaking into people’s homes, because you will be killed,” he said. 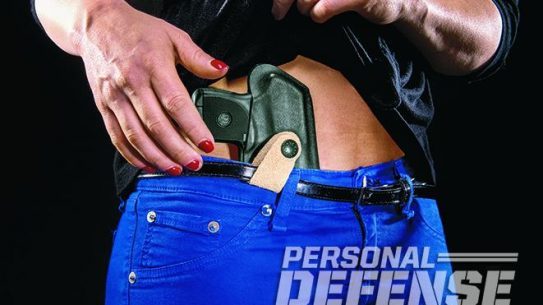 11 of the Best Appendix Carry Rigs Out There Right Now

An armed Dallas homeowner fought back against a pack of would-be home invaders early Saturday morning.…