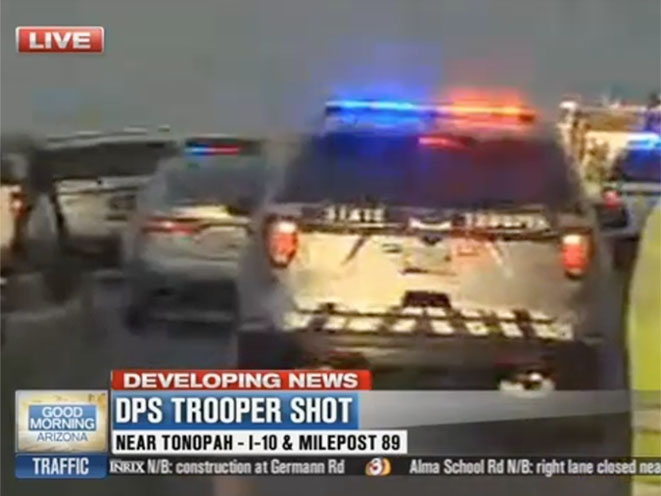 A good guy with a gun saved the day when he shot and killed a man who was beating an Arizona trooper responding to a call yesterday.

The incident began at around 4:30 a.m. when a man called 911 to report that somebody shot at his car from the median near milepost 81 on Interstate 10. The Department of Public Safety (DPS) trooper was making his way over there when he came across a flipped-over car and a woman who had been thrown from the vehicle at milepost 89 near the town of Tonopah.

The trooper stopped, got out of his car and started laying out flares.

That’s when the DPS says the suspect suddenly appeared out of nowhere and shot the trooper in the right shoulder. A physical fight then ensued.

“The suspect is getting the better of the trooper and is on top of him and striking the trooper’s head on the pavement,” DPS Capt. Damon Cecil explained.

At that point, a man driving by with his wife saw what was happening and stopped to help.

An unidentified civilian — likely the armed citizen who shot the suspect, though that hasn’t been confirmed — used the trooper’s radio to alert the DPS to the shooting.

The trooper was airlifted to an area hospital and is expected to recover. The woman thrown from the vehicle was pronounced dead.

There are still a lot of unanswered questions here, including whether or not the suspect and the woman who was ejected from the vehicle were connected. They also don’t know if the dead suspect is the one responsible for the shots-fired call that the trooper was initially responding to. According to the AP, police believe the suspect was the one driving the vehicle that flipped over.

But again, police are still trying to work out the details.

Meanwhile, Milstead had a message for the good guy with a gun who saved the day.

“Thank you,” Milstead said, “because I don’t know if my trooper would be alive today without his assistance.” 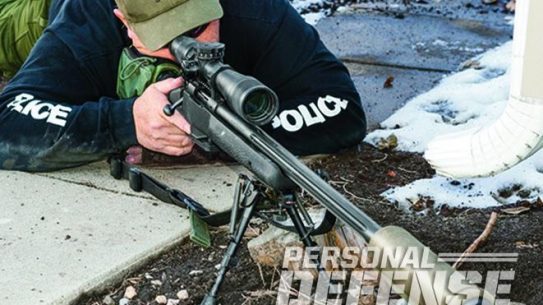