The good guy with a gun who shot and killed a man brutally assaulting an Arizona  trooper has broken his silence for the first time since the incident.

Speaking at a press conference held at Department of Public Safety headquarters on Tuesday, 43-year-old Thomas Yoxall became very emotional as he described what happened on Jan. 12 and the “overwhelming” aftermath.

“To be honest with you, it was very visceral and instinctive. I had to help. I knew I had to help,” Yoxall said.

“That morning, I never would have dreamt that I was going to save somebody’s life, let alone take the life of another individual,” he added.

The life Yoxall saved was that of Arizona DPS Trooper Edward Andersson. Andersson was driving along Interstate 10 near the town of Tonopah when he came across a rolled-over vehicle. Near the crash were 37-year-old Leonard Pennelas-Escobar and his girlfriend, 23-year-old Vanessa Monique Lopez-Ruiz, who had been thrown from the vehicle.

Andersson was in the process of setting up flares when Penuelas-Escobar suddenly pulled a gun and shot Andersson in the shoulder and chest.

Penuelas-Escobar then pounced on Andersson and began slamming his head repeatedly into the pavement.

That’s where Yoxall comes in. He happened to be driving by when he saw this all going down.

“I noticed the suspect on top of Trooper Andersson, beating him in a savage way,” Yoxall said. “I immediately pulled over.”

Yoxall grabbed his handgun from his vehicle, got out and ordered Penuelas-Escobar to stop.

“My commands were ignored by the suspect as Trooper Andersson called out for help. And I alleviated the threat to him,” Yoxall said.

Yoxall fired at Penuelas-Escobar twice, sending him down to the ground. He then flagged down another passerby, Brian Schober. Schober used Andersson’s radio to call for help and administered first-aid using a kit from Andersson’s car.

According to the DPS, Penuelas-Escobar was in the country illegally and was a known user of methamphetamine. He was formerly a federal police officer in Mexico.

Yoxall is deeply shaken as a result of the incident and is still trying to process it.

“I’m an ordinary person,” he said. “I go to work, I do photography, I hang out with my friends and family. I was put in extraordinary circumstances and may have acted heroically, but I don’t consider myself a hero.”

Yoxall doesn’t have any law enforcement or military experience, but he makes sure he gets in some training with his firearm several times a year.

“It’s a right and a privilege to be a private gun owner, and with that right and privilege comes a great responsibility,” he said.

Despite the fact that he’s troubled by the shooting, Yoxall would do it all over again if he had to.

“I firmly believe that that morning I was put there… by God,” Yoxall said. “It’s difficult to think about that day still.” 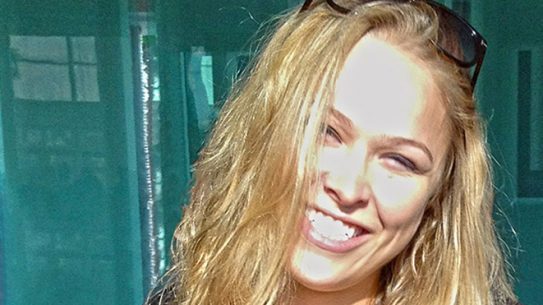 Ronda Rousey was spotted taking a course for a concealed carry permit at a...