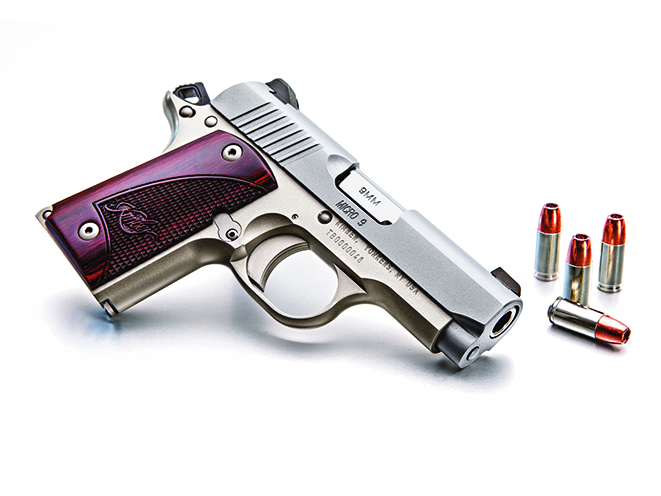 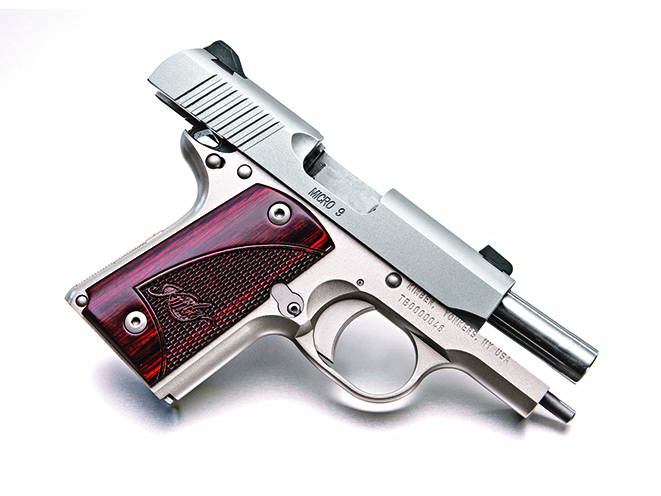 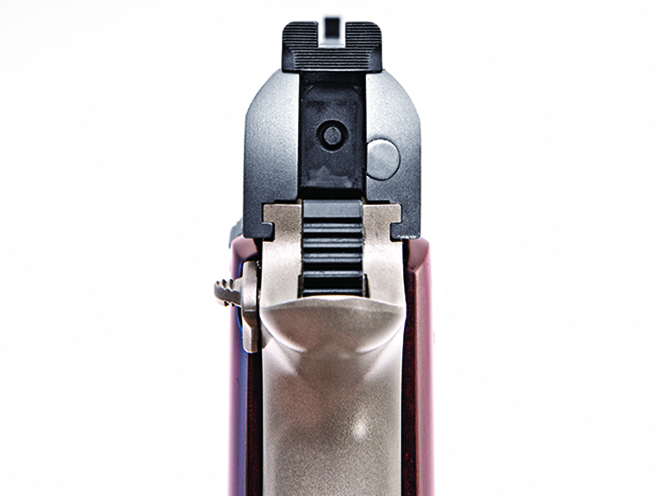 3 of 5
Kimber Micro 9
The hammer is serrated for easy thumb cocking, and the black sights contrast nicely with the silver slide. 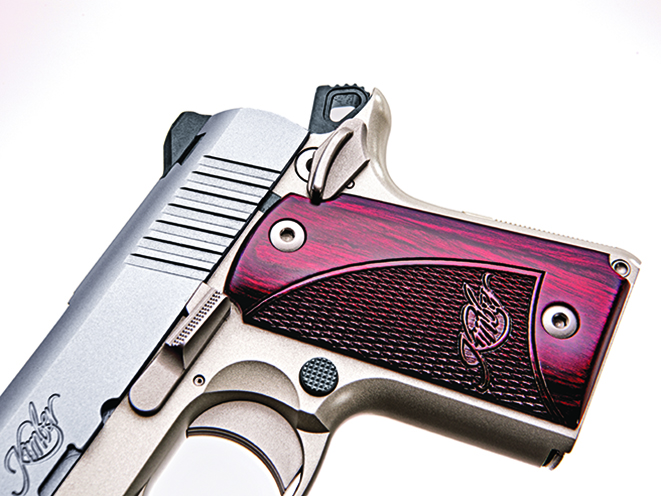 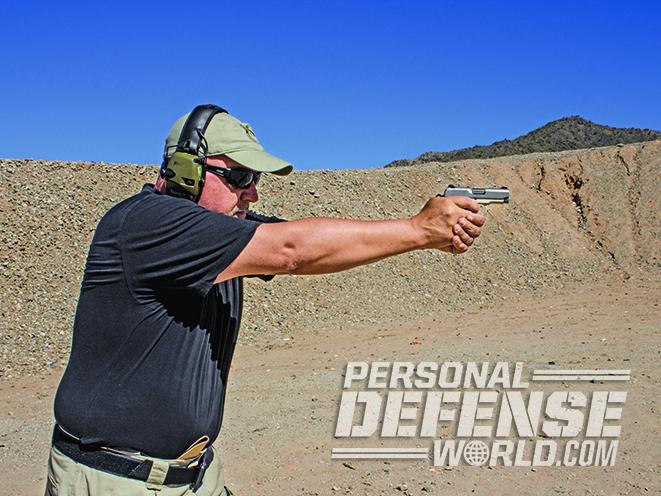 5 of 5
Kimber Micro 9
Though it’s small and easy to conceal, the Kimber Micro 9 was easy to control during the range evaluation, and thanks to its crisp single-action trigger, it turned in reasonably tight groups at 7 and 15 yards with 115-grain ammunition from Aguila, Federal and Remington. 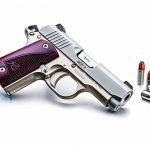 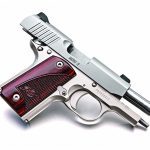 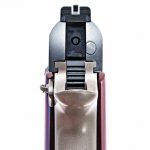 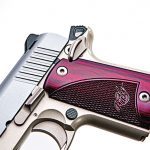 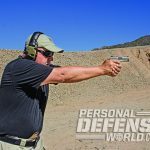 Over the last few years, we have seen truckload after truckload of firearms fly off the shelves of local gun shops. The reasons are many, but the fact remains that gun sales have skyrocketed. One of the fastest-growing divisions of this phenomenon is small-framed, concealed-carry pistols. People are looking for guns that strike a balance between size, reliability and concealability. To many, the idea of carrying a full-sized gun on the hip each day is simply not an option.

While many companies have brought various pocket pistols to market, few have done it with the variety of options as the folks at Kimber. Following the success of its Micro .380 ACP, Kimber decided to continue in the same footsteps but offer a version in 9mm. Thus, the company’s latest addition to the small autopistol market is the Micro 9.

The Kimber Micro 9 follows the success of its .380 ACP cousin but brings the 9mm round into the equation. The decision to offer a larger chambering came about because many see the .380 ACP as a bit underpowered for defensive carry. Regardless of the veracity of this belief considering modern bullet designs, the cry came for a semi-auto 9mm pistol, and Kimber answered. And while the company offers several
versions of it, I recently tested the stainless model.

The Kimber Micro 9 stands out in the market because it offers a pocket pistol for those who prefer 1911-style controls. The gun varies slightly from John Moses Browning’s design in that it does not have a grip safety or barrel bushing. It does retain the thumb safety, the traditional magazine release and an exposed hammer. With a majority of pocket pistols today being either double-action-only (DAO) or striker-fired, the Micro 9’s classic 1911 design is a refreshing turn. A slender single-stack, the gun is only 1.06 inches wide, 6.1 inches long and a breath over 4 inches in height. It fits well in a pocket or in an inside-the-waistband (IWB) holster. All told, the gun weighs only 15.6 ounces unloaded, which makes it comfortable for everyday carry.

Construction-wise, the Micro 9 is made with Kimber’s well-known attention to detail. The Micro 9’s barrel and slide are machined from stainless steel. The major benefit of this is resistance to moisture. If you are a dedicated EDC disciple, you know the effect of moisture—be it humidity or sweat—on your gun. The frame is cut from aluminum, which gives it strength and integrity while still shaving off some weight.

Of course, the Micro 9 has a single-action trigger, one of the reasons so many people are drawn to the 1911 platform. And it’s a nice trigger that has a short, smooth pull with a clean break. The reset is pleasantly short as well. In fact, this trigger will feel like a dream after you’ve used some other pocket guns on the market with trigger pulls that feel as smooth as bumper jacks. Also, the thumb safety and magazine release are classic 1911, and they’re easy to manipulate. The only small difference is that the safety is engaged when it is up and horizontal with the slide, unlike full-sized guns where the safety actuals move up at an angle to the slide. The gun comes with a flush-fitting, six-round magazine. Kimber also offers an extended seven-round magazine if you are interested in having one more round on tap.

A few other features that Kimber considers “standard” are actually nice additions to an already good gun. To ensure consistent ejection, the slide has a lowered and flared ejection port. The magazine well is also beveled to help shooters seat magazines smoothly and quickly. Lastly, Kimber included steel sights that are mounted in dovetail slots. If you are serious about a fighting gun, steel sights are a must. I have seen piles of broken plastic sights littering the range as students move beyond standard target-shooting practice. The gun you take into a fight must be durable with as few weak points as possible. The inclusion of steel sights is a tip of the hat by Kimber to those who understand the reason the gun is being made.

As far as shooting the Kimber Micro 9 goes, it was easy to run. Small concealed-carry and pocket guns of the world have a reputation for being less than friendly on the range. The price for shrinking a gun for easy carry is increased recoil and snappiness. There is simply less weight and surface area on the gun to help the shooter manage the shots. A majority of guns in this category are chambered in .380 ACP, however, so bumping up to the 9mm planted a few concerns in my head. But those concerns were promptly put to rest after the range session started. The laws of physics are still in play, and the Kimber Micro 9 did indeed produce a little more recoil than its full-sized counterparts. But it was still very easy to manage and run.

Like what you’re reading? Check out the rest of this article in ‘Concealed Carry Handguns’ 2017. For information on how to subscribe, please email [email protected]outdoorgroupmags.com or call 1-800-284-5668. 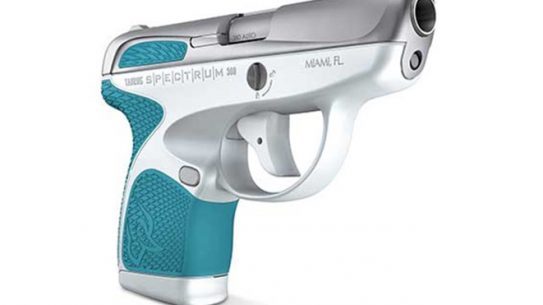 The Taurus Spectrum .380 semi-auto pistol blends fashion and function for a unique concealed...