It goes without saying that ever since it was introduced back in 2014, the Taurus Curve has been a hit with the concealed carry crowd. Now, for 2017, the Miami-based gun maker has updated their 380 Curve pistol to include a Viridian red laser/light combination, and in this video, Team Taurus Captain and world-famous pro shooter Jessie Duff tells us all about it. Oh, you’ll also get to see her cycle some rounds. No biggie.

The  Taurus Curve Viridian boasts a brighter Viridian red laser and light, longer battery life and a strobe feature. According to the press release, it also utilizes Viridian’s INSTANT-ON technology, which is incorporated into both the Viridian laser/light module and the trigger shield, thereby providing added personal protection by increasing the speed at which you can acquire a target. The trigger shield is attached to a lanyard designed to be secured around a belt loop or a purse strap. When you draw the Taurus Curve Viridian, the trigger shield detaches and the INSTANT-ON laser/light is activated. Basically, it increases your response time when seconds count. In addition to the INSTANT-ON feature, the Viridian laser/light combo can also be operated with a push-button switch when you want to turn it on or off.

Carry discreetly and confidently with the all-new Taurus Curve Viridian. See below for specs. 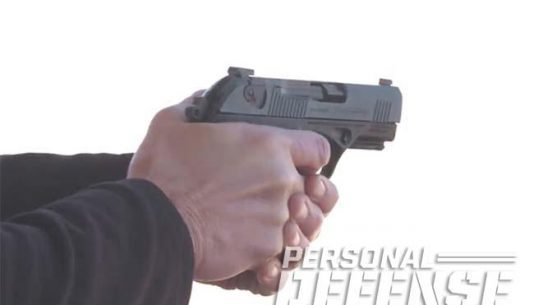 At Industry Day at the Range before SHOT Show, Ernest Langdon walked us through...