Lever-action rifles may remind you of the Old West, but they can still be effective for personal and home defense. Taylor’s 1886 Ridge Runner Takedown offers plenty of accuracy and stopping power for today’s threats.

A century or two ago, folks on the frontier did not know what the word “tactical” meant. Of course, they understood tactics. Whether you lived in a settlement on the edge of Indian territory, crossed the badlands or rounded up cattle, tactics were the moves that kept you safe while hopefully being armed. Most people learned their tactics from their time in the military or just growing up around danger.

Pistols were used for personal protection. As for long guns, people used whatever they had on hand to bag game. Specialized fighting firearms were few and far between. Until the Civil War, except for revolvers of the time, repeating arms were scarce. The Spencer and Henry repeating rifles saw some use in the Civil War, but still, they were fairly uncommon. After the war, those repeaters and single-shots rode with travelers on their way westward during the country’s expansion. Repeating rifles participated in a large number of skirmishes along the way and during the settlement years.

The .45-70-405 cartridge—or “.45-70 Government” as it is commonly called—was adopted by the U.S. Army for use in its new Springfield Model 1873 Trapdoor rifles. A large-caliber cartridge, the .45-70 was also popular with hunters, including those harvesting buffalo. This round’s surprising lethality at distance led to it being chambered in a number of single-shot rifles. In 1886, Winchester chambered its lever-action Model 1886 in the .45-70, and the race was on to chamber other repeating rifles for this cartridge. 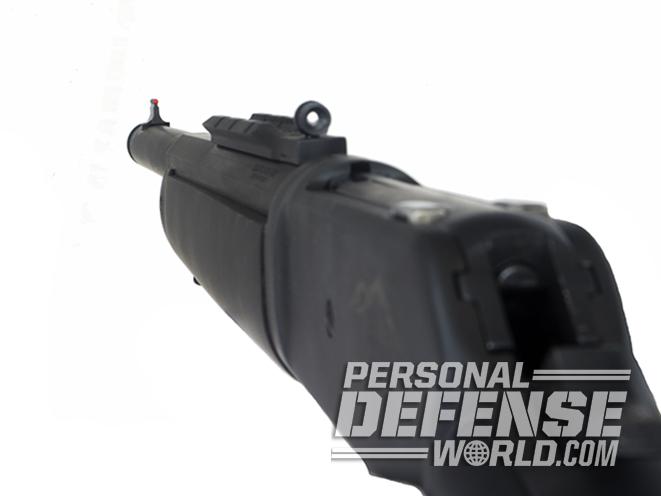 Today, Taylor’s & Company Firearms offers a historically correct reproduction of the Winchester Model 1886 in .45-70. The company is known for importing a dizzying array of firearms. Ranging from blackpowder pistols and rifles to tactical 1911s and long arms chambered for currently available centerfire cartridges, Taylor’s & Company Firearms brings only the best reproductions to the U.S.

The company’s 1886 is produced by Chiappa Firearms and, according to Taylor’s, it’s “an accurate reproduction of the original … except for 21st century technology … the new 1886 is machined to exact tolerances to assure interchangeability of parts. It uses modern metallurgy with a twist rate suitable for today’s ammunition.”

Unlike the standard 1886 Ridge Runner, the Ridge Runner Takedown allows users to remove the barrel and magazine from the receiver using a system similar to that developed for the Winchester 1892. Of course, this system makes it easier to shooters to carry and transport the rifle discreetly if needed.

The 1886 Ridge Runner Takedown has an 18.5-inch, half-round/half-octagonal, threaded barrel that comes equipped with a muzzle brake. A cap is also provided to protect the 5/8×24 threading if the muzzle brake is removed. The dovetailed front sight features a fiber-optic insert for quick targeting, and a weaver rail with a Skinner rear peep sight is installed on top of the barrel, just forward of the receiver.

A D-shaped lever works the action, and my test rifle came with a matte blued barrel and receiver, though a matte chrome version is available. Like the original 1886, spent casings are ejected from the right side of the receiver. The wooden stock and forend are covered with black Soft Touch rubber for enhanced comfort and control, and a rubber buttpad is included to help absorb some of the felt recoil. Sling swivels are placed at the front and rear.

I really wanted to mount a red-dot sight on the Taylor’s 1886 Ridge Runner Takedown to test its capabilities. A smallish red dot seemed an easy solution for a sight faster than the rifle’s iron sights and capable of reaching out to 100 yards. But I ran into a problem with the Weaver rail. All of my red-dot sights were compatible with Picatinny rails.

Picatinny and Weaver rails have some similarities, including the angles of the rail. Where they differ primarily is in the spacing of the slots. Weaver slot spacing tends to vary between manufacturers, whereas that distance is standardized between Picatinny rails. None of my smaller red-dot sights, each with two horizontal screws, matched the Weaver rail slots. A replacement mount for any of them using a single horizontal screw would work—and my Aimpoint PRO was already so equipped. 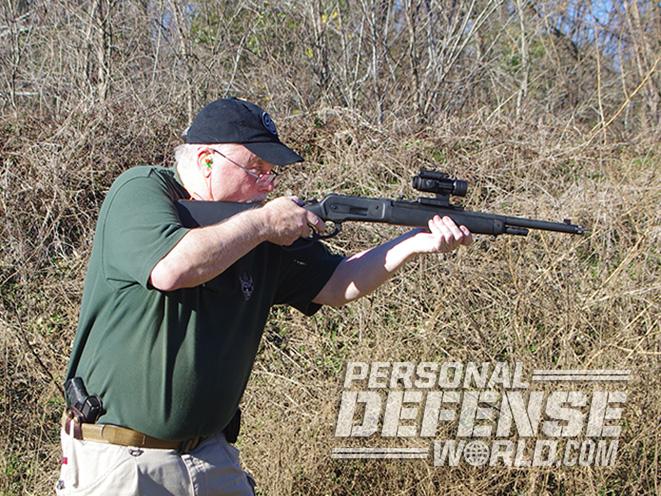 If there ever were a rifle to give the PRO a thorough workout, the .45-70 Ridge Runner Takedown would be it. I’ve often said I am not recoil sensitive, and it’s still true. However, shooting this .45-70 from a benchrest tested that proclamation. The peak recoil of the .45-70 feels similar to a 12 gauge, but the .45-70 seems to reach its peak quicker.

Most .45-70 Government factory loads are in the 1,800- to 2,000-fps range, shoving big bullets weighing 300 to 325 grains or 405 grains. Do the math and you’ll see that the muzzle energy is nothing to sneeze at, generally between 2,000 to 3,000 foot-pounds—a freight train in motion. Rumor has it that most jacketed loads will penetrate mild 0.25-inch steel routinely and on occasion poke a hole in mild 0.5-inch steel.

I found the Ridge Runner’s action to be fairly smooth while the 5.25-pound trigger was surprisingly crisp. The balance on this rifle was nice, and it handled well, coming up quickly and transitioning from target to target smoothly. Not to mislead you, but by “smoothly” I mean the rifle was under control, as I would lever the action during the transition and ready the next shot for when the sights found the target. The Ridge Runner Takedown might not win a speed match against an AR-15, but I suspect a single good hit would persuade someone to stop!

I fired the Ridge Runner from standing, sitting and kneeling positions for about 75 rounds, and follow-up shots were controlled, if a tad slow, from all positions. I shot a few rounds into 2x4s, front and sideways, with through-and-through penetration. Adding two sheets of drywall would have negligible effect on the bullet, so knowing what is downrange will be important.

Shoving four hot-dog-sized .45-70 rounds into the loading gate of the 1886 is a relatively slow affair. Of course, it’s not slower than any other rifle that doesn’t feed from detachable box magazines. As for targeting, the Aimpoint PRO performed very well out to 50 yards. Beyond 50 yards, the 1X Aimpoint couldn’t help my aging eyes. 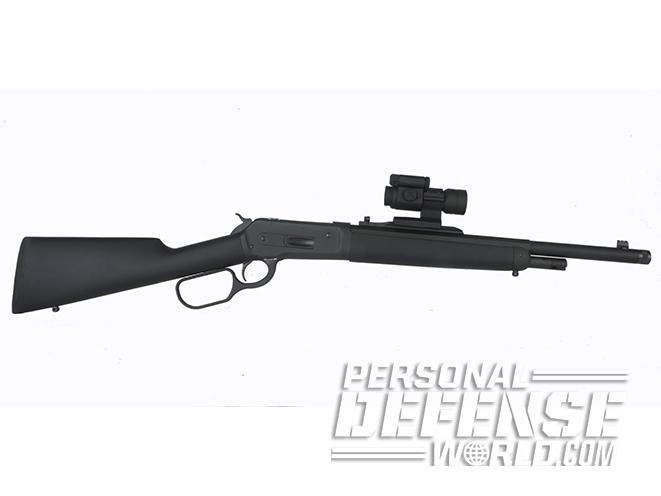 I have always had a soft spot for the .45-70 Government cartridge and lever guns chambered for it, and the effectiveness the combination brings. A bit of nostalgia perhaps, but the .45-70 is a proven performer. The Taylor’s & Co. 1886 Ridge Runner Takedown is an excellent example of the combination, with the takedown feature being a nice bonus!

Where would this rifle fit in the scheme of things from a tactical standpoint? For LEOs, the Ridge Runner could supplant 12-gauge slugs due to their range and accuracy restrictions. The Ridge Runner would have none of those restrictions while delivering controlled hits exactly where needed. At a roadblock, the rifle would certainly slow a vehicle a down. In a situation where a hostile is behind barricades but still can be seen and there are no worries about overpenetration, the .45-70 Government and the Taylor’s Ridge Runner should be able to handle the barricade, exiting with sufficient power to end things.

For personal defense, shooters restricted to using the same rifle for hunting and defending the hearth, depending on which animals are hunted, could make use of the Ridge Runner Takedown.

This article was originally published in ‘Gun Buyer’s Annual’ 2017. For information on how to subscribe, please email subscriptions@outdoorgroupmags.com or call 1-800-284-5668.