Thompson is only producing 1,500 of these matched sets, and the production number is tastefully engraved on the right sides of both commemorative guns.

Auto-Ordnance is celebrating its 100th year by offering a commemorative matched set consisting of a Thompson 1927A-1 and a 1911A1 pistol. Featuring two of our military’s most iconic firearms, the anniversary set is sure to delight collectors and shooters alike.

“We’re proud to honor the name and the legacy of General John T. Thompson with this special 100th Anniversary matched set,” said Frank Harris, the vice president of sales and marketing for the Kahr Firearms Group, which owns Thompson.

Harris continued, “There is a rich historical past attached to the Tommy Gun, and we feel General Thompson would be proud to see that what started as a research project in 1915 has served the military, law enforcement and shooting enthusiasts around the world so prominently for over 100 years.” 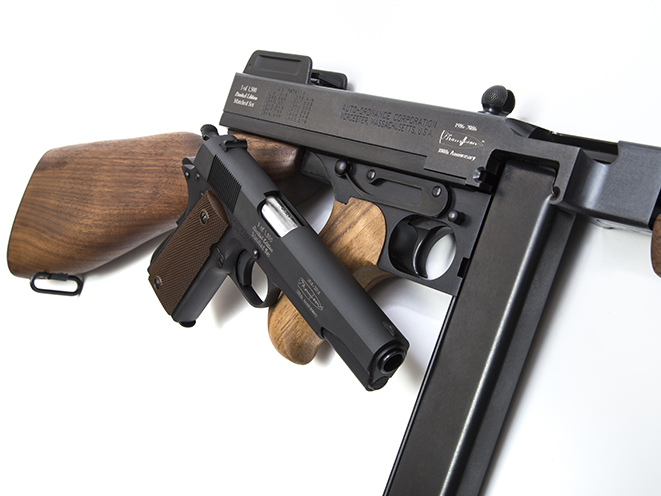 The 1927A-1 is a semi-auto .45 ACP facsimile of the U.S. military’s revered Thompson submachine gun. Auto-Ordnance uses a 16.5-inch barrel on this carbine, so no special permits are required for ownership. The barrel possesses the original Thompson’s distinctive radiator fins and Cutts compensator. Richly grained American walnut is used for the fixed buttstock, pistol grip and vertical foregrip, and it’s given a low-sheen finish. Anniversary guns are engraved with the classic Thompson bullet logo and are numbered one through 1,500.

Like the original Tommy Gun, the 1927A-1 is no lightweight—it weighs a whopping 13 pounds and has an overall length of 41 inches. One 20-round stick magazine is included, but the 1927A-1 can use 30-round magazines as well as authentic 50- and 100-round drum magazines.

Engraved with the matching limited-edition number is a 1911A-1 pistol in .45 ACP. Parkerized a slate gray color, the handgun is built to mirror guns built by Auto-Ordnance for WWII military contracts and includes brown checkered plastic grips, a lanyard loop and an arched mainspring housing. Auto-Ordnance has also added a Series 80 firing pin safety to prevent the gun from inertial firing when dropped on its muzzle. The pistol boasts a steel frame and slide and weighs 39 ounces unloaded. One seven-round GI magazine is included, and the pistol is also engraved with the vintage Thompson logo.

The 100th Anniversary guns are not just built for display. These are true firing pieces of history created to pay homage to General Thompson and the company he created to manufacture his legendary submachine gun. Committed collectors will choose not to fire these commemorative guns, but there are few shooters who could resist the temptation to pay tribute to the guns and the men who fought with them with some very enjoyable trigger time.

Both guns come packed in a fitted, foam-lined, polymer hard-shell travel case along with their magazines and a cable lock. They must be purchased as a set, and the suggested retail price is currently $1,971.