by Robert A. Sadowski
in Home & Self-Defense
0

Bill Wilson’s obsession with firearms started at the age of eight. His dad, like most parents, had other plans and wanted Bill to study watchmaking and work in the family’s successful jewelry store. But, as Bill put it, “I conned Dad into a deal. I’ll go to watch/jewelry-making school if you let me open a retail gun shop in your vacant building, two doors down from the jewelry store. My dad was a really bright guy, but he had a fatal lapse of focus that day and fell for my scheme.”

As you can imagine, there was very little watch repair going on and a lot more gun dealing and custom revolver work in Bill’s early days. It was a stepping stone to pistol-shooting stardom, a lucrative firearms business, becoming a co-founder of the International Defensive Pistol Association (IDPA) and an accomplished hunter.

I recently spent some time with Bill Wilson at the Circle WC Ranch in Texas. Hunting pigs and shooting Wilson Combat guns was on the agenda. When he broke out the pistols and timer and we started ringing steel, it was like playing catch with Carlton Fisk. You listen when Bill Wilson offers small details on how to shoot better. He also answered some of my questions.

What was the first handgun you ever fired?

My first handgun was a 4-inch-barreled High Standard Sentinel revolver in .22 LR. Dad got it for me when I was 12.

What drove you to start building 1911s?

I started shooting IPSC in late 1976, shortly after the organization was formed. Being a typical competitor, I felt a better gun would make me a better shooter. In retrospect, I would have been better off sticking with the Colt Gold Cup I had at the time and spending the money I spent on the quest for a better gun on ammo.

The short version goes like this. I shot my first IPSC match with a Colt Python, and it was apparent that I had to have a semi-auto to win. I borrowed a Browning Hi-Power for my second match, but the minor power factor hurt my score. By my third match I had a brand-new Colt Gold Cup that ran fine and shot well. But I couldn’t be satisfied, so I bought a Colt Series 70 Government and sent it off to a big-name pistolsmith, but the gun came back in crappy shape. So, I bought a second Colt Government model and sent it off to another big-name pistolsmith. It was better, but I was still not impressed.

At the 1911 IPSC Nationals in Denver, the match had a weak-hand stage where you were at a big dis-advantage if you didn’t have an ambidextrous thumb safety. The evening before the match, Keith Hamilton showed me a couple of his guns that had Swenson ambidextrous safeties. Keith explained how they really aren’t that complicated and I should just build my own. He pulled the ambidextrous thumb safety out of one of his guns and put it in mine for the match. That evening really got my wheels turning. I thought, “Heck, if I can fix watches, make clock parts and make jewelry, working on one of these simple pistols with big parts shouldn’t be a big deal at all.” 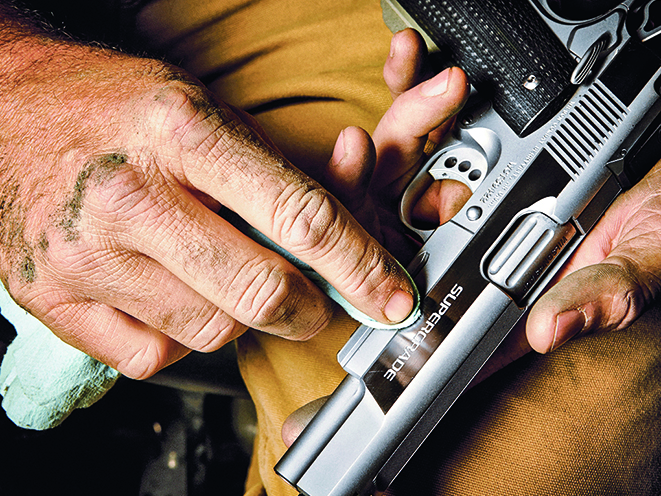 What is your gun-building philosophy?

Build a reliable and cosmetically appealing gun and stand behind it 100 percent. Above all, it has to be reliable/durable and look nice. If there is a problem, take care of it promptly and satisfy the customer.

Why do you think the 1911 design is still around?

Look at history. Any weapon that has served long and well in the military has a long afterlife in the civilian world. It is simple and rugged, and was designed by the genius of John Browning. That’s pretty much a recipe for success. In addition, the 1911 platform is simple to work on like an AR-15, so people like to tinker with them.

You helped found the IDPA and competed avidly in IPSC/USPSA. What’s your fondest accomplishment?

I was very actively involved in IPSC/USPSA and was one of Jeff Cooper’s early section coordinators in the late ’70s. My USPSA membership number is “CL-15” and my IDPA number is “CL-01.” It was the 1984 National Championship where I was really on my game—I finished in third place overall and second in the top 16 shoot-off, only being beaten by Jerry “Burner” Barnhart, who was also shooting a WC pistol. Another fond memory was my successful streak at Second Chance (the biggest money match of the time) of getting first, second and first for a three-year run.

Who is your favorite professional shooter?

My good friend Robbie Leatham. He is to competition shooting what John Browning is to firearms design. There is a reason he’s called “The Great One.” Leatham won a lot of matches in the 1980s with WC pistols before he signed on with Springfield Armory.

How often do you shoot?

I don’t shoot formal competition anymore. I gave it up in 2005 so I could have a life beyond match shooting. However, I still really enjoy shooting and typically train with a handgun, shooting 200 rounds or so three to four times a week to try to stay proficient. In addition, I’m always working on some sort of project for WC or hog hunting, so I usually shoot some type of firearm daily.

What’s your favorite round? 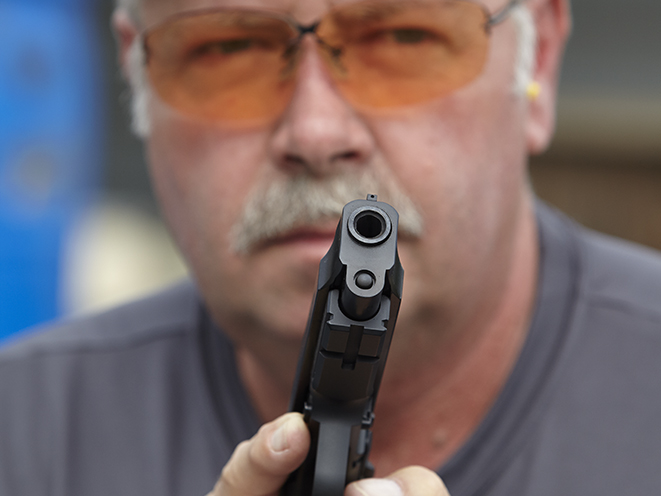 What is your preferred carry rig, open or concealed?

I normally carry one of two pistols: a 4-inch-barreled WC Ultralight Carry or a Beretta 92 customized by WC. I carry these in an OWB pancake-style holster—normally a WC Lo-Profile, Lo-Profile II or a new Edge polymer rig. I carry every day, all day, and feel naked without a pistol on my hip.

The Colt Python. I love the hand-assembled quality as well as the fit and finish of the pre-1980 guns. I shot my first IPSC match with a Colt Python and won several bowling pin shoots with one. I collect old Colts and have several nice Pythons.

What is your favorite non-1911 pistol?

Beretta 92 series guns. I shoot them as well as I do a 1911, and they are bullet-proof reliable in terms of functioning. WC is now doing a lot of custom work on them and making accessories. Being the standard-issue handgun of the United States military, it will be around a long time. I also collect them.

What’s your advice to a new gun buyer/user?

Go to a range where they rent a variety of guns, handle all of the quality brands/models in 9mm, rent the ones that feel good in your hand and shoot them. Buy the model you like the best and shoot the best with. A 9mm is easier to shoot and the least expensive to feed of all centerfire calibers. And once you’ve picked your pistol, you need to get professional training and shoot it a lot. Practice some standard drills, record your scores and focus on improving.

This article was originally published in ‘Combat Handguns’ March 2017. For information on how to subscribe, visit outdoorgroupstore.com