Glock 19s, whether customized or left stock, are some of the most popular pistols among shooters today.

The U.S. Marine Corps Special Operations Command (MARSOC) and the New Jersey State Police both recently adopted the same pistol, the 9mm Glock 19, which highlights the popularity of this particular handgun. Glock representatives have told me that the G19 is the company’s best-selling pistol overall, and many gun dealers around the country have said the same is true in their neck of the woods. Let’s analyze that popularity. 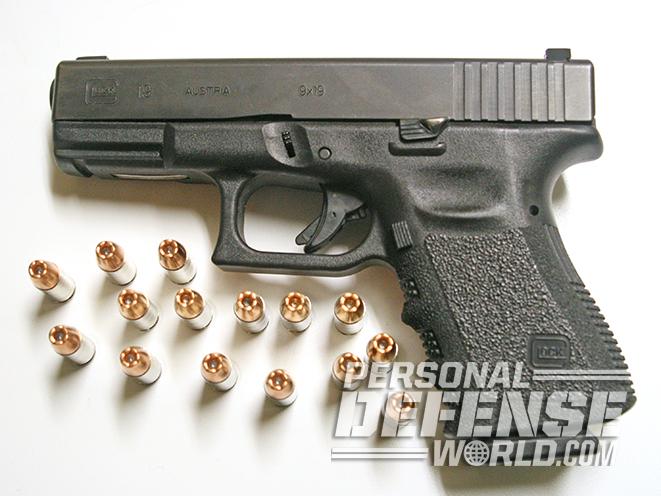 We’ll start with a single locale. In New York City, you’re in “Glock Country.” When the NYPD adopted 9mm pistols in 1993, members of the service were given three choices among 16-shot, double-action-only (DAO) models: the Sig Sauer P226 DAO, the Smith & Wesson Model 5946 and the Glock 19. Of approximately 35,000 armed personnel, more than two-thirds are estimated to have chosen the G19. Walking through the city and observing what the local cops are carrying, more than one tourist has come to the conclusion that the NYPD must be issuing Glock 19s to all of its people. Actually, New York cops have historically bought their own guns, through the department, from the department-approved list.

Many federal agents working in the city also carry Glock pistols. The Port Authority Police chose the Glock 19 as standard issue, and the Housing Authority and Transit Authority police were issued Glock 19s when they were absorbed into the NYPD several years ago. The Glock 19 is also reported to be the standard weapon for United Nations security, headquartered of course in New York City.

Why did the G19 become the dominant choice for NYPD cops? It’s not just that it’s the least expensive of the three options. The G19 is the most compact and by far the lightest of the optional duty guns due to its polymer frame compared to the steel frame of the authorized S&W and the aluminum frame of the Sig. This makes the G19 particularly suitable for plainclothes wear. That’s important for two reasons. One is that while NYPD officers are no longer required to be armed 24/7, even on their own time, the department strongly encourages them to carry off-duty, and a long institutional history there supports the practice. The other is that along their career paths in a big department, the cops know they may find themselves in plainclothes assignments where they need something easier to conceal all day. 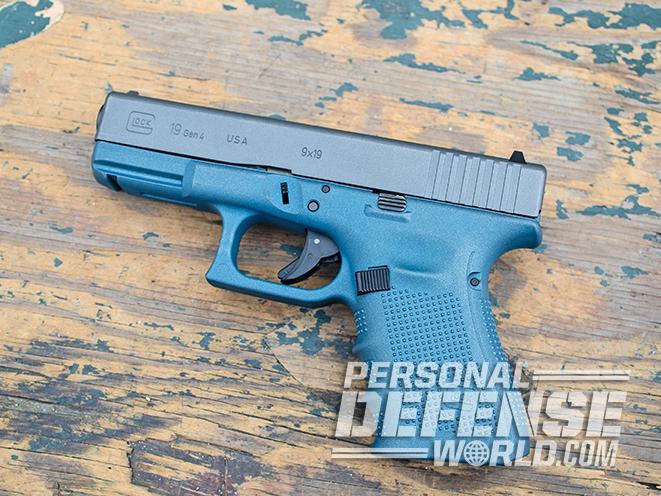 Navy SEALs have reportedly adopted the G19 to replace their previous 9mm service pistols, and the reasons cited somewhat mirror those of MARSOC. Sometimes these elite troops have to work undercover in plainclothes. The Glock 19 is simply easier and more comfortable to carry concealed for longer periods of time than the large-framed, all-metal service handguns it has replaced in that role.

Another reason, of course, is the 9mm Glock’s legendary reliability and durability in extremely hostile environments. Other nations have gone to the Glock for similar reasons. 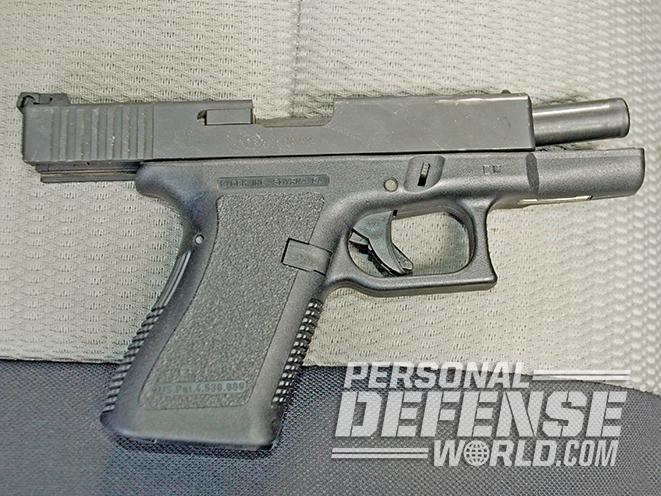 The American civilian market is big on Glock. There are more armed citizens licensed to carry concealed in public by the State of Florida alone than there are police officers in the entire U.S. The Glock 19 is also a favorite of trainers and serious armed citizens. When the International Defensive Pistol Association (IDPA) was looking for a size range for its new Concealed Carry Pistol division, it polled its members as to what they actually carried daily as opposed to what they competed with. The single most popular carry pistol reported? The Glock 19.

The 2016 mass stabbing by a crazed jihadi in St. Cloud, Minnesota, was stopped by a “good guy with a gun.” Jason Falconer, the hero who killed the monster for whom ISIS took credit, is a firearms instructor, an award-winning shooter and a part-time police officer. According to reports, the personal handgun he expertly used to save countless lives was a Glock 19.

Popular trainers Rob Pincus and James Yeager have spoken glowingly of Glock 19 pistols, teaching with them and recommending them to students. I’ve seen another ace instructor, “Super Dave” Harrington, teach and compete with the Glock 19, turning in superlative performances in both of these arenas.

When we use “handgun” and “balance” in the same sentence, we’re usually talking about how the gun sits in the hand and on target. In that sense of the term, the Glock 19 certainly does have good balance. But this particular Glock strikes a good balance in other ways.

We’ve already noted that it’s big enough, with enough cartridges on board, for duty carry in uniform while also being sufficiently light and compact enough for concealed carry. And we can’t forget about that cartridge capacity. When it was introduced in the late 1980s—a time when most so-called “wondernine” service pistols were full-sized and held 15+1 rounds of 9mm ammo—the compact G19 held the same firepower but was smaller and lighter. The standard concealed-carry gun for police detectives and armed citizens with carry permits alike for most of the 20th century was the snub-nose revolver holding five or six .38 Special rounds. At 23 ounces unloaded, the Glock 19 was comparable in weight to the six-shot Colt Detective Special and lighter than the S&W Model 10 or 64 with a 2-inch barrel with a similar size—but it held sixteen 9mm rounds.

What about the pistol’s accuracy? When it comes to shooting, there’s really not much difference between the G19 with its 4.01-inch barrel and the 4.48-inch barrel of its big brother, the Glock 17, in terms of sight radius and practical accuracy. At least one top Glock Sport Shooting Foundation (GSSF) shooter, Mike Ross, leaves his G17s at home and shoots his G19 primarily in competition. He feels the slightly shorter slide of the G19 cycles quicker and gets back on target faster. And of course, if a G19 shooter wants more capacity, you can still use a 17-round G17 magazine (or a 33-round G18 magazine) if it’s legal in your state. Some states—New Jersey and Colorado come to mind—have 15-round magazine limits, so the G19 just makes the cutoff. Glock also produces 10-round magazines for states mandating that limit.

Another key balancing act is fitting many hand sizes. The original G19 frame did a great job of that, and the Gen4 frame has a shorter trigger reach and comes with interchangeable backstraps to fit a wider variety of hand sizes.

In 2011, I was lucky enough to win the ILEETA Cup, the shooting championship of the International Law Enforcement Educators and Trainers Association annual seminar. I won a gift certificate for a Glock, and I chose a G19 Gen3.

When the gun came in, I decided to test it for accuracy before deciding what sights to put on it. It turned out that the gun not only grouped well, but its standard white-dot front/white-outlined rear sights were spot on. I mentioned this to my significant other, who remarked, “Why don’t you just leave it as is? You’re always telling students it’s more about the shooter than the gun, and more about consistent application of proven technique than about the shooter. Put your money where your mouth is, and teach and demonstrate with that out-of-the-box Glock 19!”

She had me there, and I took her up on it. I use different guns on each training tour, sometimes for testing purposes and partly to stay familiar with the assorted handguns students bring, but I left that G19 bone stock. Each demonstration qualification I’ve shot with it since has resulted in a perfect 300 out of 300 score. On the road, my teaching gun is my carry gun, and I certainly never lacked confidence carrying this rock-solid reliable pistol.

On a recent range day, that stock Glock 19 Gen3 was one of seven handguns I had in the car when I found some spare time at my disposal. I ran each of them through the same timed six-shot drill at 15 yards. The single pistol with the tightest group was the stock G19, beating several much more expensive defense handguns.

Many manufacturers have challenged the Glock 19 by creating polymer-framed, striker-fired pistols similar in size and capacity. But none have yet toppled the G19 from its perch as the leader in the niche it created more than a quarter-century ago. None is yet so widely adopted, nor so “street proven.”

I and others have called the G19 a “gateway gun” because so many people have found it suitable as their first handgun, been delighted with its performance and have become serious handgunners as a result.

These are all sound reasons why the G19 has maintained its position as the leader in its corner of the handgun market today.