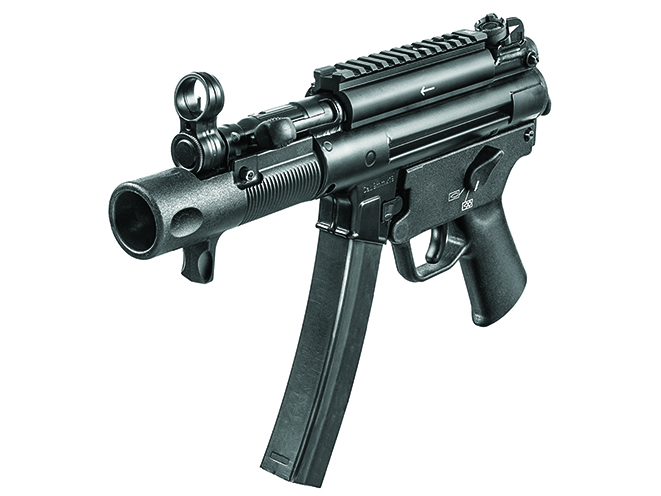 1 of 8
Heckler & Koch SP5K
HK’s new SP5K is designed to look and operate like an MP5 submachine gun, but as a semi-auto pistol with a few new features, including a hand stop. 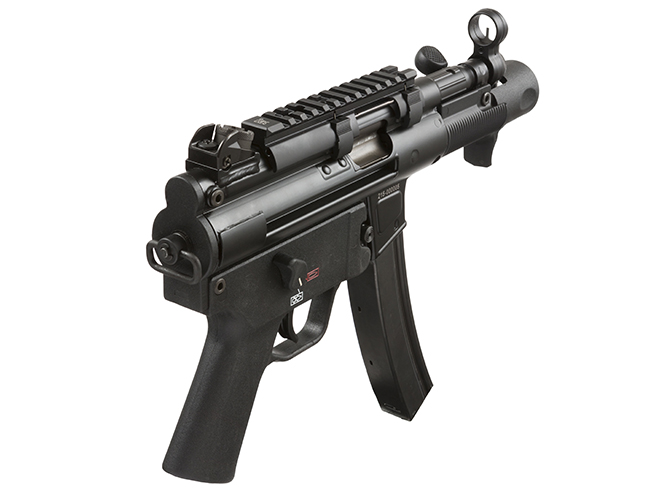 2 of 8
Heckler & Koch SP5K
Many of the SP5K’s features are similar to those found in the HK MP5 series, including the tubular receiver, sights and charging handle. Sadly, the safety only has two positions. 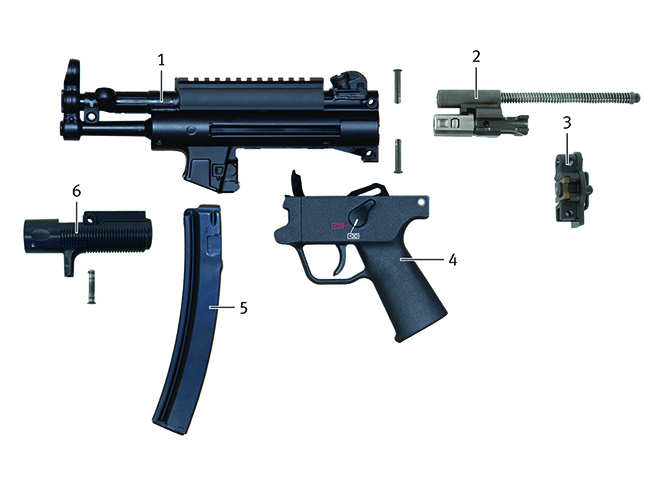 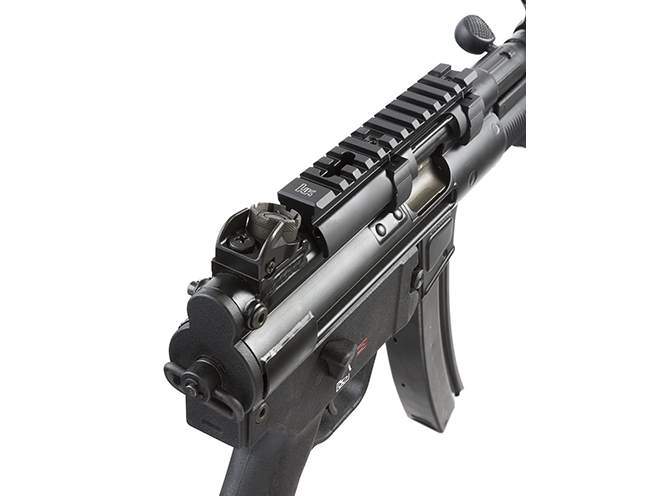 4 of 8
Heckler & Koch SP5K
An adjustable, diopter-style rear sight is included behind the optics rail. Also note the solid sling loop installed at the rear of the receiver. 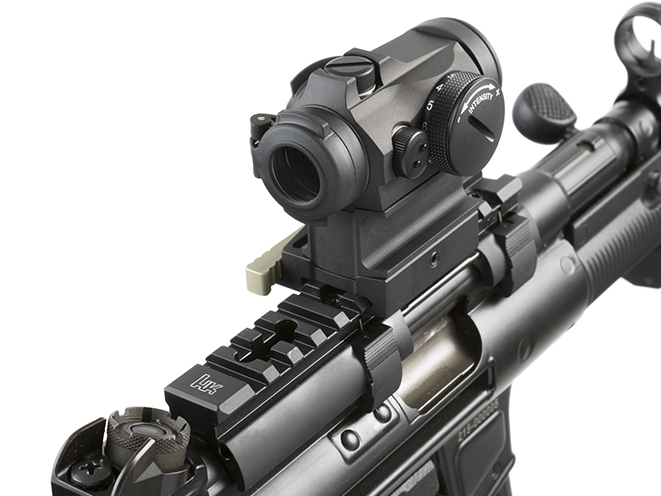 5 of 8
Heckler & Koch SP5K
The Picatinny top rail makes it easy to add a fast-targeting reflex sight. Users can also opt to remove the rail for a more classic look. 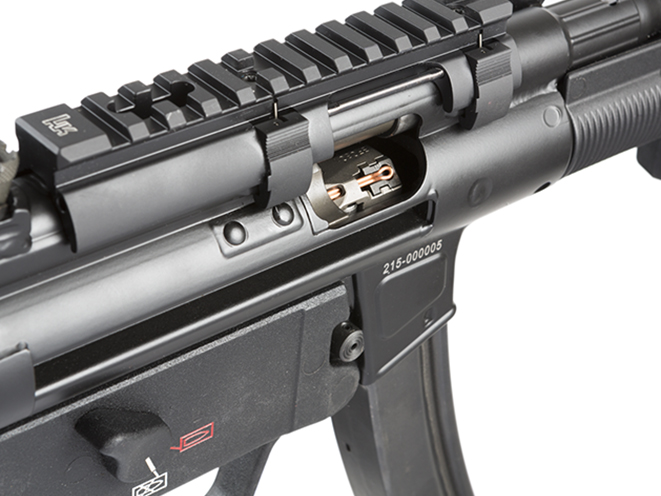 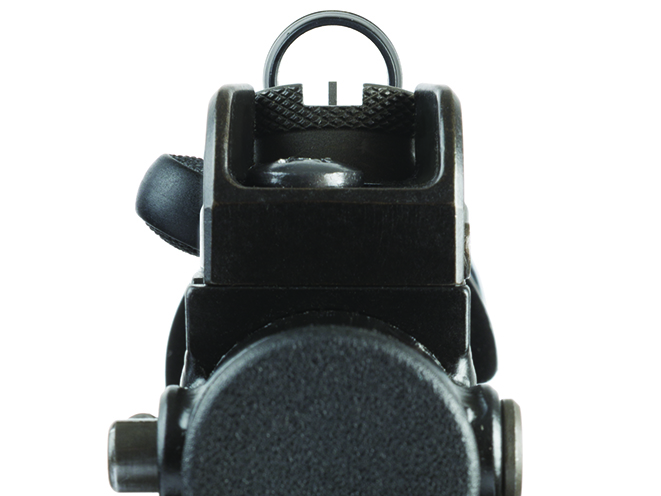 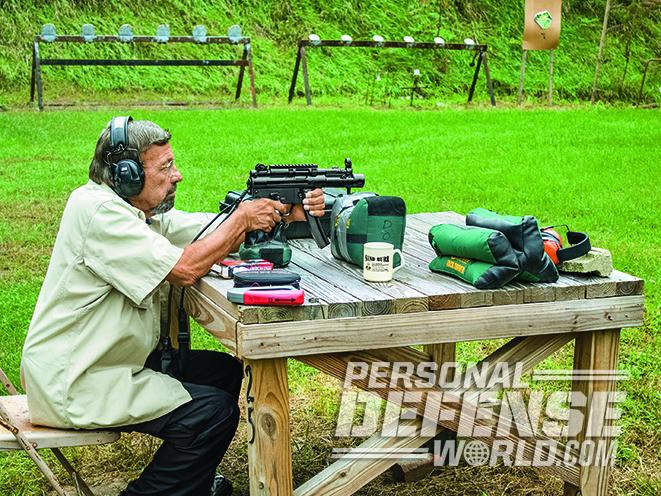 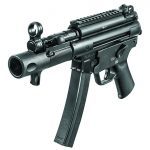 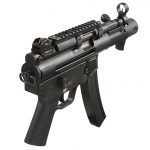 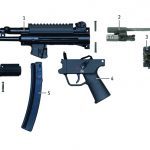 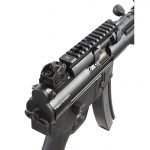 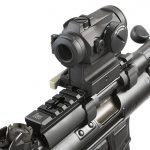 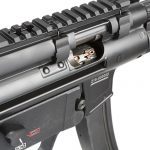 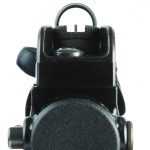 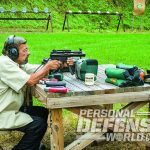 In the summer of 2016, Heckler & Koch introduced its SP5K. The “SP” stands for “Sporting Pistol” and the “K” apparently for “kurz,” which is German for “short.” It looks remarkably like the MP5K machine pistol, except that, as the HK website notes, “The overall length of the SP5K is approximately 14 inches—slightly longer than an MP5K—due to its unique handguard. The SP5K handguard is designed with special ergonomic and safety features to protect the shooter’s hand and provide a comfortable and stable grip.”

Of course, the SP5K is a semi-automatic 9mm, lacking the “fun switch” of the select-fire MP5K. And about that handguard: From the muzzle end, it makes the gun look a 37mm. The stub at the front is designed to keep your support hand from sliding in front of the muzzle. It is altogether too short to function as a vertical foregrip, which is a good thing, as you can already find pictures on the Internet of early adopters’ SP5Ks that have been retrofitted with aftermarket foregrips.

Alas, this is forbidden. According to the Bureau of Alcohol, Tobacco, Firearms and Explosives (BAFTE), adding second vertical grip on a pistol, whatever its configuration, requires a license. You’ll need to contact the BAFTE for further information.

Moving back from the front, we next come to the magazine release. It’s a button on the right side of the receiver, just out of reach of a right-handed shooter’s strong-hand index finger while gripping the gun—unless your trigger finger is a lot longer than average. I wish this gun had the additional option of a paddle-style magazine release just behind the magazine well, as on my old department-issued MP5 submachine gun, which was very easy to hit with your support hand. And, just like on that same old submachine gun, the magazine of the SP5K won’t fall free and has to be manually withdrawn from the magazine well. Your support hand will have to move some to accomplish that task.

In typical HK long-gun fashion, the SP5K’s charging handle rides forward of the receiver on the left side, and it has to be drawn back and pulled up to lock the gun open. Also, the bolt does not lack back after the last round in the magazine has been fired. Instead, the bolt closes itself on an empty chamber.

The top of the receiver is like an older MP5’s, but it now sports a rail for adding sights and optics. I personally like this rail, but some HK fans on hkpro.com seem to prefer the classic look. Thankfully, the rail is attached to the receiver with removable setscrews.

Another feature of HK’s classic roller-lock weapons is the drum-type, adjustable diopter rear sight. As I looked across the turret, I saw that HK had wisely left out the array of apertures normally seen on the rifles and submachine guns, knowing that most shooters won’t be able to align a front sight through a peep sight while holding the SP5K as far from the eye as handguns are normally held. The good news is that my test gun came out of the box with the turret adjusted for center hits using a post-in-notch sight picture at 25 yards.

The ambidextrous manual safety was a bit stiff, and it would be hard for a short thumb to reach. Keeping my thumb on the same side of the receiver as the trigger finger made that easier.

How about the trigger? Think standard roller-lock HK firearms. The pull was a bit long and heavy. Using my Lyman digital trigger pull gauge and measuring the trigger from the toe, near the bottom of the triggerguard, the pull weight on my test gun averaged 7.39 pounds. From the center, where a pivoting trigger like this one affords less leverage, the average was 9.37 pounds. HK lists the SP5K’s pull weight as being between 6.74 and 10.11 pounds on the company’s website. Truth in advertising is always appreciated, and HK has certainly done so in this regard.

Now we come to the back of the gun. Obviously, to be sold as a pistol, this firearm can have no buttstock. Instead we find a loop for a single-point sling, and one is provided in the SP5K’s handsome, rugged case. The sling quickly adjusts to go around one’s neck or around the neck on one side and under the armpit on the other, which is better because it offers less neck strain and fatigue.By extending the firearm until the sling is taut, some steadiness is gained. It’s probably the best way to run the SP5K as it comes out of the box. This shooting technique has been attributed to various top-tier European commandos using the original MP5K machine pistol.

I tested the HK SP5K’s 25-yard accuracy at the Sand Burr Gun Ranch in Rochester, Indiana, while I was teaching a MAG-40 course there in October of 2016. I used sandbags on a wooden bench, and it took a bit of time to get this oddly shaped piece of ordnance solidly supported on the bags.

Like what you’re reading? Check out the rest of this article in ‘The Complete Book of Handguns’ 2017. For information on how to subscribe, visit outdoorgroupstore.com 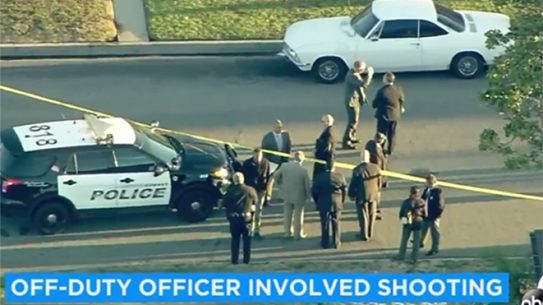 An off-duty LAPD officer opened fire on a pair of intruders inside his Downey,...