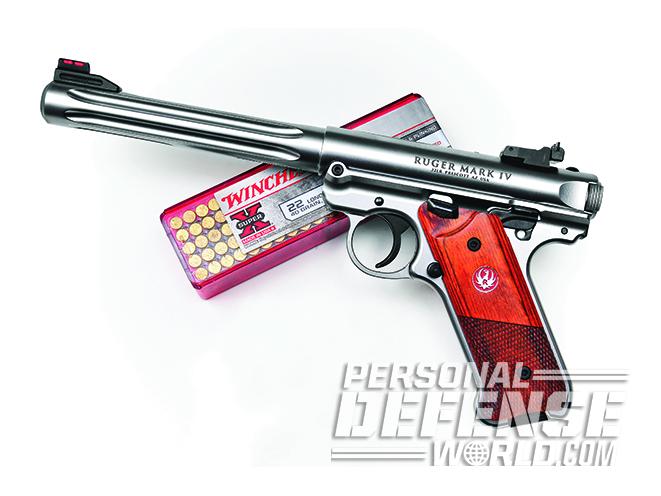 1 of 10
Ruger Mark IV Hunter
Ruger’s rimfire pistols have earned a reputation for being affordable and accurate over the years, but they’re also known for being tough to take down for cleaning and maintenance – until now. The new Mark IV series will change all that. 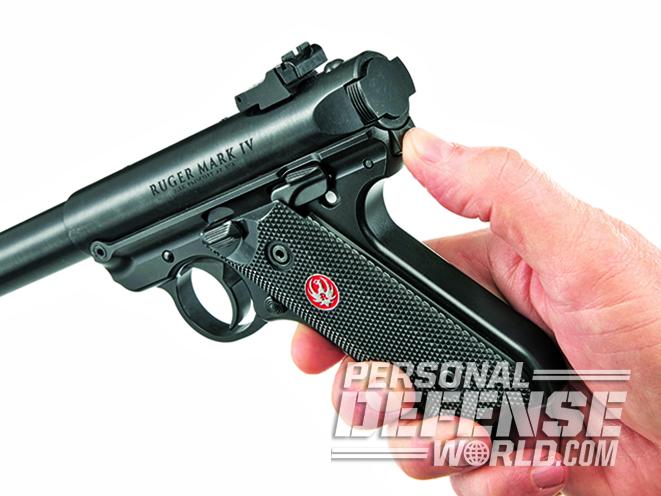 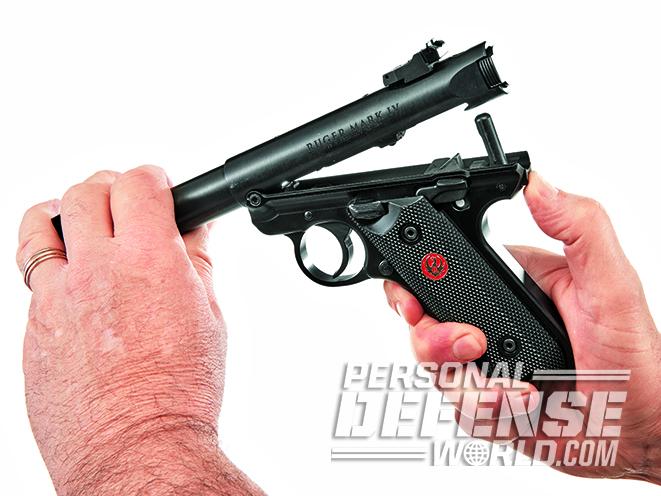 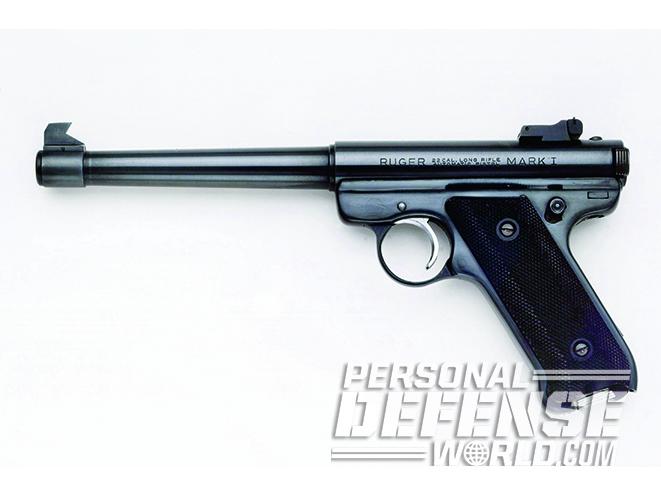 4 of 10
Ruger Mark I
The Mark I added adjustable sights to the series. 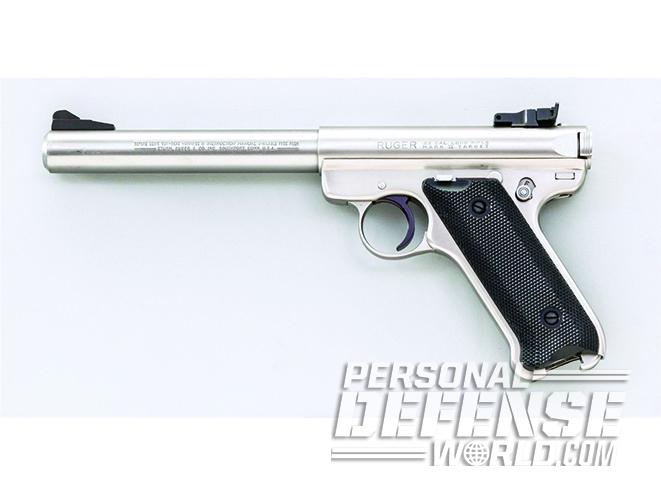 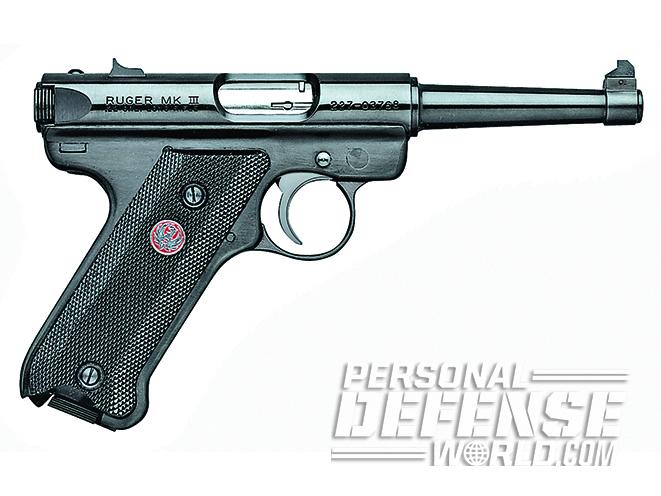 6 of 10
Ruger Mark III
The Mark III added a number of features, including a magazine release mounted on the frame instead of the heel. 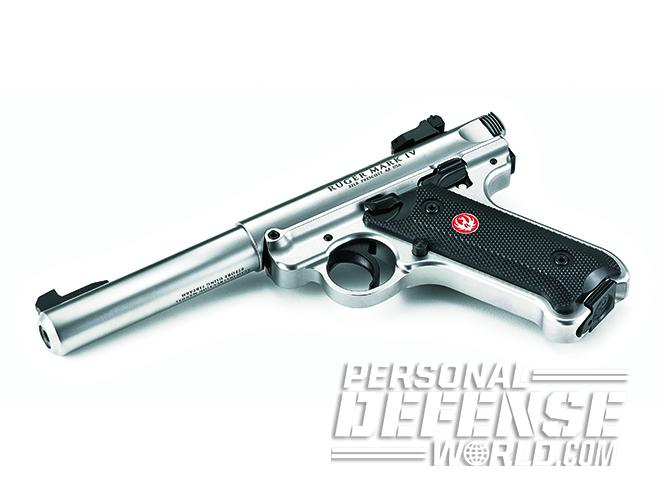 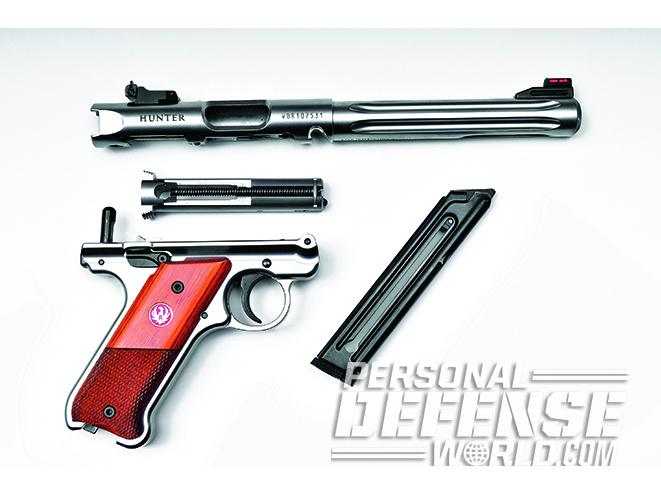 8 of 10
Ruger Mark IV Hunter
To diassemble an unloaded Mark IV, simply depress the black button on the back of the frame, tilt the barrel/receiver assembly downward until it can be pulled off the frame and remove the bolt. 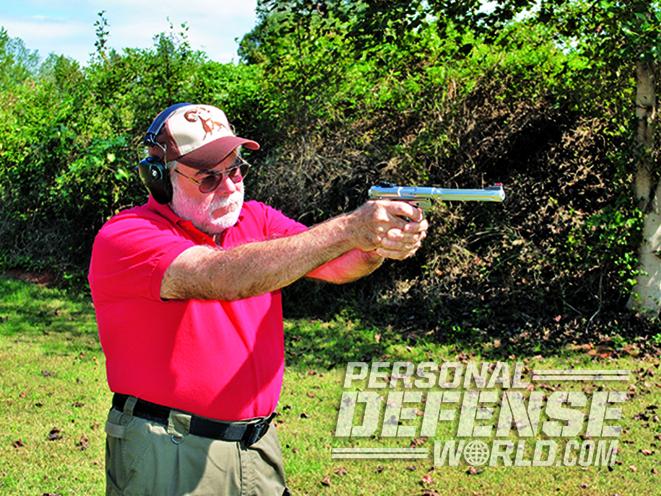 9 of 10
Ruger Mark IV Hunter
Though the author tested the Mark IV Hunter too early in the year to see how it’d perform on small game, it shined on the range by producing tight five-shot groups at 25 yards. 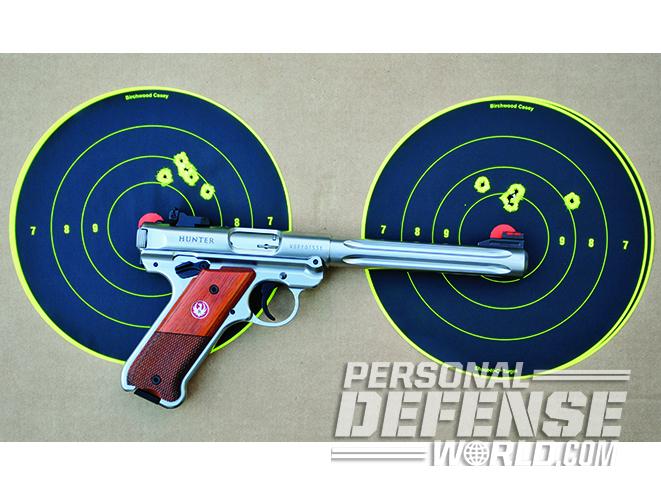 10 of 10
Ruger Mark IV Hunter
The author created these groups by firing the Mark IV Hunter from an MTM K-Zone rest. As you can see, this rimfire pistol is certainly precise enough to bag varmints and critters. 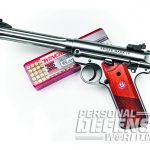 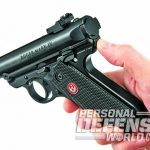 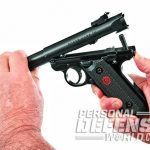 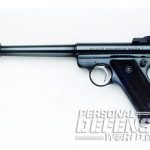 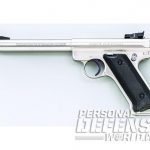 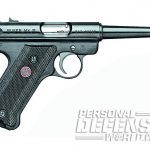 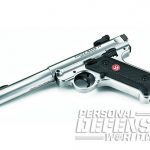 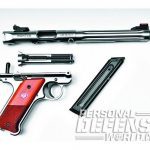 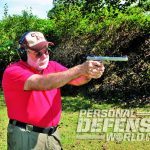 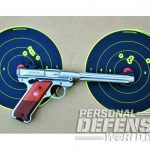 In our information-saturated society, we are constantly being bombarded by various manufacturers’ claims that their products are the best, most popular creations. But because most of us have developed a mental firewall to screen out this deluge of advertising allegations, we tend to forget that, on occasion, a few of them are true.

It will come as no surprise to ‘Combat Handguns’ readers that the most popular firearms in the world are those chambered for the .22 Long Rifle cartridge. These guns—and their ammo—are inexpensive, easy to shoot, light on recoil and noise, accurate and suitable for hunting all types of small game. And they’re just plain fun.

For the first half of the 20th century, .22 LR handguns suffered from a severe handicap. The market was awash with cheap American and European rimfire revolvers. At the other end of the spectrum were a small number of high-end .22 LR revolvers and pistols manufactured by Smith & Wesson, Colt, Hammerli, High Standard, Sig Sauer and Walther. These were intended for serious target shooting, so the average person who wanted a quality rimfire pistol or revolver at an affordable price was just out of luck. That is until Bill Ruger came along.

In 1946, William B. Ruger applied for a patent for a semi-auto .22 LR pistol. In partnership with his friend, Alex Sturm, he began manufacturing the Standard model pistol at a small facility in 1949. It generated immediate interest, and by the early 1950s, Sturm, Ruger & Company was selling all the pistols it could manufacture.

Ruger’s Standard pistol consisted of a simple tubular receiver with a barrel screwed into it as well as a separate grip frame containing the trigger mechanism and a detachable box magazine. In short order, it became known for its ruggedness, reliability and accuracy—all at a price that the average hunter, farmer, trapper or plinker could afford. Then, in 1951, Ruger introduced the Mark I target pistol, which featured adjustable sights and a heavy barrel.

After that, new models followed on a regular basis. The Mark II incorporated a bolt stop that was activated manually or by inserting an empty magazine. Options included blued or stainless steel finishes and barrels up to 10 inches in length on target versions.

Ruger joined the plastic revolution with its Model 22/45 pistol, which has a grip frame assembly manufactured from fiberglass-reinforced Zytel polymer and simulates the feel and controls of a typical 1911.

These Ruger pistols quickly became the bestselling .22 LR handguns in the world. In fact, the total production numbers have exceeded the 3 million mark. But that hasn’t stopped Ruger from innovating and offering new models.

In 2004, the company introduced the improved Mark III pistol, which featured a visible loaded-chamber indicator on the left side of the receiver; a magazine release button near the triggerguard instead of the heel-type release common on earlier models; adjustable sights and a top end drilled and tapped for an included Weaver-style scope base; a new magazine disconnect that prevents the pistol from being fired with the magazine removed; a key-operated internal lock for safe storage; shorter tapered bolt ears; and a smoother ejection port profile for enhanced reliability.

But one feature that all the Ruger .22 LR pistols had in common up to this point was how difficult they were to disassemble and reassemble. With an empty magazine in the pistol, you had to pry the mainspring latch open and then pull the mainspring housing out and down to remove the integral bolt stop pin from the receiver. Then you had to remove the entire mainspring housing from the frame, remove the magazine from the pistol and pull the bolt out from the rear of the receiver. You then slid the barrel/receiver unit off the frame. The pistol could be reassembled by reversing this process.

Sounds easy, doesn’t it? Well, many Ruger owners found it wasn’t. As one who has owned a number of Ruger Mark II and 22/45 pistols over the years, I can attest to the fact that the takedown process usually resulted in broken fingernails, irritation, exasperation and a fair number of expletives being voiced before everything went back together the way it was supposed to.

Thankfully, Ruger is well known for constantly updating and improving its products, and the company recently announced the release of its Mark IV pistol, which is much easier to disassemble and includes improved controls and ergonomics—simply push one button and you’re ready to disassemble, clean, lock the gun back together and hit the range again.

The Ruger Mark IV is currently available in two styles: the Target and the Hunter. The former is available in matte black or stainless with a steel barrel/receiver unit and either an aluminum or steel frame. Both Target models come standard with 5.5-inch bull barrels, undercut front blade sights and fully adjustable rear sights.

The Mark IV Hunter is an all-stainless-steel pistol with a fluted, 6.88-inch bull barrel, a red fiber-optic front sight and a fully adjustable express-style rear sight. All Mark IV receivers are also drilled and tapped for mounting Weaver- or Picatinny-style rails for the easy addition of optics, though the rails themselves are not included. All Ruger Mark IV pistols feature recessed muzzles to protect their barrel rifling, and while the Target models come with synthetic grips, the Hunter features attractive checkered laminate grip panels.

The most prominent feature of the Mark IV pistols is Ruger’s new hinged-frame construction, which does away with all the vicissitudes common to earlier pistols, the most prominent being the disassembly/assembly procedure.

To dissemble the pistol, you remove the magazine and verify the chamber is empty. Let the bolt run forward and apply the safety. Then, while holding the pistol by the barrel, you depress a black button on the rear of the frame, just under the bolt, and tilt the barrel/receiver assembly downward until it clears the bolt stop pin. The barrel/receiver assembly can now be lifted up and removed from the frame. Pull the bolt out from the rear of the receiver. That’s it. No more broken fingernails or your spouse warning you not to use that kind of language around the children.

Unlike the older versions, the Ruger Mark IV has a one-piece, CNC-machined grip frame, but it retains the excellent ergonomics and pointing qualities of the earlier pistols. The push-button safety and slide stop have been replaced by ambidextrous safety levers and a serrated slide stop above the left grip panel, all of which can be manipulated without moving the pistol around in your hand. The safety can also be switched to the left side with an included washer.

Ruger was kind enough to supply me with an early production Mark IV Hunter to test and evaluate. As I have come to expect of Ruger products, the Hunter’s quality, fit and finish were all above reproach, and that fluted barrel looked as sexy as all get out. Thanks to its Luger-type grip frame angle, the Hunter pointed like a natural extension of my arm when brought to eye level. The controls will be second nature to anyone versed in the mysteries of the 1911 pistol, and the trigger broke crisply with 5 pounds of pressure.

To ascertain the Ruger’s capabilities, I test-fired it at 25 yards from an MTM K-Zone rest with four different brands of ammo. While the wide V-shaped notch of the express-style rear sight took a bit of getting used to, once I had the measure of it I was able to produce five-shot groups in the 2-inch range with almost boring consistency. As with most firearms, the Hunter showed a preference for a particular brand of ammo, in this case Winchester’s T22 Target load. I also want to mention that the fast-stepping 21-grain Copper-22 load from CCI ran flawlessly through the gun during our test.

As its name indicates, Ruger intended the Mark IV Hunter pistol, well, for hunting small game and vermin. Being too early and warm in the year to sally forth into the bush to hunt squirrels and rabbits (to say nothing of snakes), our off-hand shooting consisted of my wife, Becky, and I engaging an array of steel plates from varying distances on my club’s action range. Thanks to the pistol’s excellent ergonomics, balance, trigger and large, easy-to-see sights, we were both able to rack up a very satisfying ratio of clangs to bangs on the range. By the time we were finished, we had fired in excess of 300 rounds through the Ruger and had experienced only one malfunction—a failure to feed with the Remington Yellow Jacket hollow points.

When I asked Becky what she thought of the Ruger Mark IV Hunter, she simply said, “Do we have to send it back to Ruger any time soon?” If you are looking for a quality .22 LR pistol for competition, informal target shooting, small-game hunting or survival, make sure you check out Ruger’s new Mark IVs. 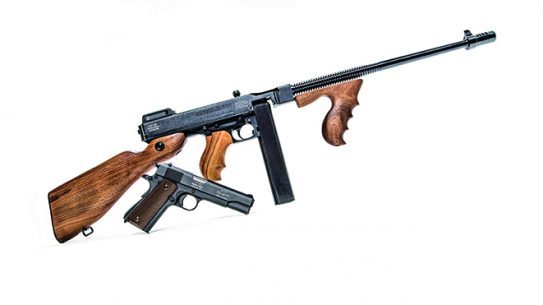 What better way to say "happy birthday" than buying some new guns?