Ruger Mark IV: Field-Stripping with the Push of a Button

Ruger is offering three variants of its new Mark IV pistols—two blued Target models and the Hunter (shown), which has a stainless finish, a fluted barrel and more.

The Ruger Standard .22 LR pistol debuted in 1949, and it was the genesis of a classic American success story. Designed by William B. Ruger, Sr. and financed in the beginning by Alexander Sturm, this pistol would start the firm of Sturm, Ruger & Co., Inc. on the way to its destiny to eventually becoming our nation’s largest firearms manufacturer, as it remains today.

The Standard had a simple set of fixed sights and a tapered, 4.75-inch barrel. Its steel frame consisted of two halves welded together. After a few years, it was supplemented by a target version, which Ruger dubbed the Mark I.

The Mark I was offered with adjustable sights and either a tapered, 6.88-inch barrel or a heavy, stovepipe-shaped, 5-inch bull barrel. The Mark I was quickly established as the “beginner’s pistol of choice” in what was then the only shooting competition open to the public, the Bullseye game. James Clark, Sr., used a version of the Mark I that he had customized himself in the .22 LR stage at the Camp Perry National Championships and won the overall championship—the first civilian ever to do so. Needless to say, this greatly boosted the reputation of Ruger’s rimfire pistols. 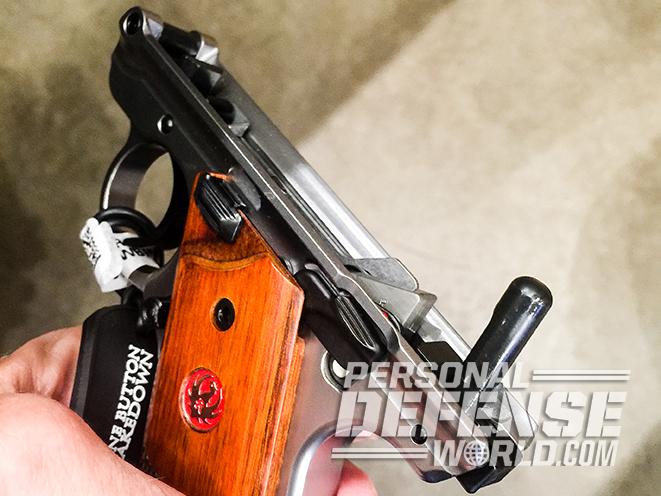 Simplicity of manufacture (a bolt running inside a tube) allowed the reliable Ruger Mark I to be manufactured at a much lower price point than what had been the classic American .22 LR autopistol for generations, the Colt Woodsman, which was introduced back in 1912.

The Ruger was, however, a less sophisticated pistol. The thumb safety was essentially a button that slid up and down in a vertical slot on the left side of the frame. The bolt didn’t lock open when the pistol ran empty; the shooter had to do that manually, retracting the bolt with the support hand and thumbing the safety with the firing hand to keep the pistol open for inspection.

The Mark II and Mark III saw a growing list of features added: a dedicated bolt lock/release lever; optional polymer frames in the 22/45 series; magazine disconnector safeties; and a controversial loaded-chamber indicator on the Mark III. None of these incremental improvements were as significantly different, however, as what we see now in the Ruger Mark IV.

My first handgun of my own, at age 11, was a Ruger Standard model. It was also the only gun that ever made me cry. I had been able to take down and reassemble every other gun in the home—the Winchester Model 1894 rifle, pump-action and double-barrel shotguns, and my dad’s Colt autopistol—but the Ruger .22 was a new experience. I did manage to get it apart, but I could not for the life of me put it back together, and the frustration drove me to tears until my dad finally reassembled it for me.

I would later discover that I was not alone in this. There were entrepreneurs who sold aftermarket devices to assist in the takedown and reassembly of this pistol. When I announced the Ruger Mark IV on my blog, others wrote of their frustration with earlier iterations of Ruger rimfire pistols. One fellow said he got so fed up with the complicated disassembly and reassembly of his Ruger rimfire that he traded it for a Browning Buckmark and never looked back.

What led to these conversations is what makes the new Ruger Mark IV so great—an easy takedown and reassembly process. Once you confirm the pistol is unloaded, you press a button at the rear of the frame. The “upper” then pivots on its hinge like a break-open revolver or shotgun. Now you can remove the bolt and proceed from there. And, yeah, it is pretty much that simple.

And the new design is easier for factory employees to assemble, too. A Ruger insider who will remain nameless once said, “The saying on the factory floor was that the .22s had to be beaten together with rubber mallets.”

In the evolution of Ruger .22 autopistols, “This is the first major redesign of this pistol,” said Brandon Trevino, Ruger’s product manager at the Prescott, Arizona, plant where these handguns are now produced. Brandon noted that there have been some 60 subtle variations of the Mark III series. The Ruger Mark IV kicks off with only three styles. There is the heavy-barrel Hunter model in stainless steel with a fiber-optic front sight and an adjustable rear sight, a stainless Target model, and the blued Target version I tested for this article.

Like what you’re reading? Check out the rest of this article in ‘The Complete Book of Handguns’ 2017. For information on how to subscribe, visit outdoorgroupstore.com