by Massad Ayoob
in Ammo, Gear
0

From the six-shooter days of the Western frontier onward, conventional wisdom has held that at typical handgun velocities, bigger bullets are better. 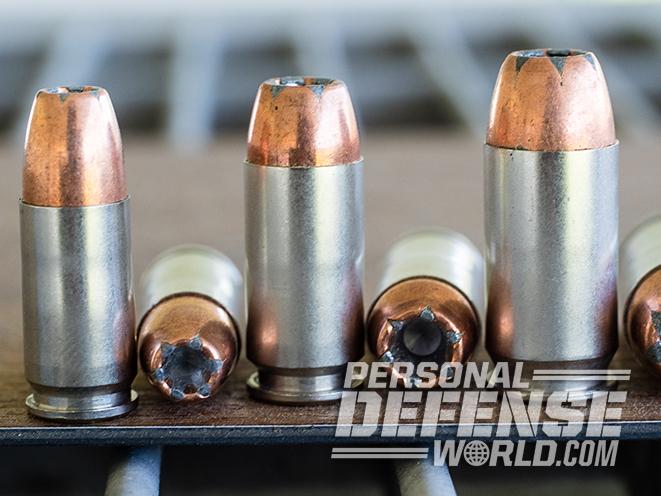 Around 1990, writer Charles Petty was given unprecedented access to the FBI’s wound ballistics studies that had led to the agency’s adoption of the 10mm cartridge. He wrote, “As the testing progressed, another factor became obvious. No 9mm loads came close to the 10mm and .45. ‘We expected that there would be a gap,’ said [the FBI’s Urey] Patrick, ‘but we didn’t expect it to be so large.’ In the first series of tests, the best a 9mm could do was 67.5 percent.

The .38 Special fared just as poorly, and the standard FBI-issue .38 Special [158-grain, lead, hollow-point +P] also achieved a 67.5 percent success rate. Among the initial rounds tested, only the 10mm, .45 ACP and a single .357 Mag round were able to score consistently above 90 percent.”

The late Dr. Martin Fackler was a huge influence in the field of wound ballistics, and much of the FBI protocols in this regard follow his principles. In a 2012 interview, Dr. Fackler said, “The size of the hole the bullet makes, the .45 is bigger than a 9mm. But how much bigger, by diameter, really doesn’t give you the measure of how much tissue it disrupts. What does is the area of a circle, or pi-r-squared. It’s the radius squared. So, if you take your .45, your .451, and your 9mm as your .355, take half that, the radius, square that, and what you’ll find is that the volume, or the area, of damaged tissue made by the .45 is about 60 percent more than made by the 9mm.”

In the hunting world, a debate lasted for decades between master hunters Jack O’Connor, who did much to popularize the light, fast .270 Winchester rifle cartridge, and Elmer Keith, who was a vociferous advocate of large calibers and heavy, slow-moving bullets. What was overlooked was that each man was a highly skilled rifle shot. They could on any given day have borrowed the other man’s preferred rifle and still come home with a deer. The mechanism of wounding and destroying tissue takes second place to shot placement; not how the bullet damages tissue, but what tissue is rendered inoperable.

This is probably the only issue in this complicated argument the debaters seem to agree upon unanimously. Shot placement is the first priority in rendering a homicidal opponent incapable of continuing to harm others. To be semantically correct, “wound placement” should probably be the term we use, not “shot placement.”

Historically, shot placement has meant where the bullet strikes, whether it is the 10-ring of a target or the bridge of an opponent’s nose. Wound placement involves the track of the bullet until its trajectory stops. A .22 Short bullet that strikes between the eyes may be excellent shot placement, but if the projectile stops there without entering the cranial vault, no wound has been placed where it is likely to cause instant cessation of violent activity.

Now back to velocity. The .357 Magnum uses bullets the same size as a .38 Special, but drives them much faster. Historically, the .357 Magnum earned a reputation of being a more decisive “man-stopper.” The Illinois State Police was not happy with the performance of 100- to 115-grain, standard-velocity bullets in the 9mm S&Ws that for decades were their signature guns. But when those pistols were loaded with 115-grain hollow points at the +P+ velocity of 1,300 fps, troopers and command staff alike were happy with how swiftly solid hits ended gunfights. The clamor for .45 ACPs and .357 Magnums ceased. The department eventually transitioned to .40 S&W pistols simply because, some insiders say, the FBI recommended it at the time.

At the FBI Wound Ballistics Symposium in the late 1980s, Dr. Fackler impressed the Bureau with his laboratory assessment of the 147-grain Winchester Olin Super Match (OSM) load, which had been developed originally for precision accuracy out of the suppressed HK MP5 9mm submachine guns used by some elite military operators. He had found that the bullet penetrated deeper (14 inches in his particular formula of ballistic gelatin, which he had developed to replicate swine muscle tissue) than the 115-grain 9mm loads of the period.

Of course, the FBI is to American police leadership what the Harvard Business School is to Fortune 500 executives, and when the Bureau adopted these 147-grain subsonic rounds as its standard 9mm load, many U.S. law enforcement agencies followed suit. 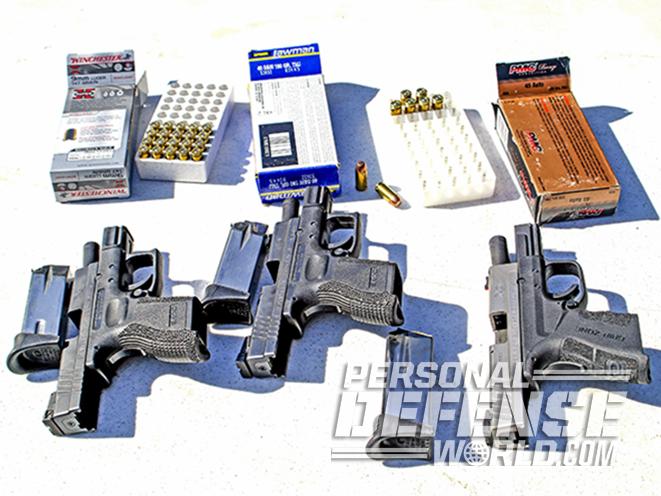 The results were mixed. Running at 950 to 1,000 fps, the 147-grain bullets sometimes expanded and sometimes didn’t. Some agencies like the San Diego Police Department were happy with 147-grainers and stayed with them. Some, such as the Las Vegas Metropolitan Police Department (LVMPD) and the Jacksonville, Florida, Sheriff’s Office (JSO), were disappointed with the results. Both went to lighter and faster 9mm loads; the LVMPD also authorized officers to carry .40- and .45-caliber pistols if they chose, and Jacksonville solved the argument by leaving the 9mm and adopting Glock .40s.

Projectile design is a key factor. The 147-grain, premium-grade, subsonic 9mm of today—as opposed to yesteryear’s versions—is a classic example. For years now, the LAPD and the Los Angeles County Sheriff’s Department (LASD) have been happy with the field performances of their Winchester 147-grain Ranger 9mm ammunition, though both departments still authorize .45 ACPs for personnel who want more power than the 9mm affords, and the LAPD insists that its SWAT and SIS officers carry .45 ACPs.

The Federal HST design has been particularly effective in subsonic 9mm format. For some years, the Portland, Oregon, Police Bureau has issued 147-grain HST 9mm ammo to its officers and reports that it has worked decisively on the streets. The St. Paul, Minnesota, Police Department went to the same load after switching from the .40 S&W to the 9mm, and reports seeing no difference in numerous shootings since. Its officers are happy with their 147-grain Federal HST rounds.

However, other departments have been very successful with other loads. The Orlando, Florida, Police Department (OPD) was among the first to issue Winchester’s 127-grain Ranger +P+ JHPs rated for 1,250 fps for its Sig Sauer P226 pistols, and for decades reported outstanding success with this ammo. The agency recently switched to bonded Winchester Ranger 124-grain +P rounds, partly because the +P+ ammo was hard on some small off-duty and backup 9mms, and partly for better windshield penetration. The OPD reports that the 124-grain +P is currently doing a good job for its officers.

For as long as any living New York cop can remember, NYPD officers complained about the feeble stopping power of non-expanding bullets in their .38 Special revolvers, and said the same of the 115-grain FMJ rounds they were required to carry when the department went to 9mm pistols circa 1993. Those complaints seem to have ended in 1999 with the adoption of the Speer 124-grain Gold Dot +P JHPs at 1,220 fps. The Topeka, Kansas, Police Department, which adopted this same load prior to the NYPD, has likewise reported spectacular gunfight results with this cartridge.

The LVMPD, we’ll recall, initially was disappointed with its field results with 147-grain subsonics. A few years ago, while interviewing some of the department’s firearms staff, I was told that the LVMPD issues all Speer Gold Dot ammo—subsonics in .45 ACP (230 grains) and .40 S&W (180 grains), but 124-grain +P rounds in 9mms. The firearms staff members were adamant that they could see no “stopping power” differences between those three rounds on the street, and were recommending the 9mm to their officers for the lighter recoil and higher cartridge capacity.

The Laws of Physics

Some reading this are old enough to remember “the new math,” a short-lived fad in the 1960s where American grade schools changed the way math was taught. Now the phrase means any fad that quickly becomes highly discredited.

The suggestion that the 9mm, .40 S&W and .45 ACP are equivalent is seen by some as “the new physics.” The same experts who argue that medium calibers equal larger calibers (particularly at similar velocities) tend to also say that “energy” is meaningless in the wound ballistic context. Yet we are discussing how to deliver a powerful blow that disrupts an opponent’s ability to do harm, and “powerful impacts” and “physics” cannot be entirely separated.

Returning to bullet diameter, one factor often overlooked in the quest for penetration is the width of the wound track as related to incapacitation. In Glock Sport Shooting Foundation (GSSF) competition, the man to beat today is Bryan Dover. Shooting virtually every gun division of each tournament, he has sometimes won overall high honors with his “Heavy Metal” score—shot with his harder-kicking .45 ACP beating every other score posted—including his own with lighter-kicking 9mms. When I asked him about that, he replied that the larger-diameter .45 ACP bullet would often cut a scoring line and get the higher value that a 9mm bullet would have barely missed. This is also a reason why so many Bullseye shooters tend to use .45 ACP pistons in the centerfire event instead of the smaller, lighter-kicking calibers allowed.

Similarly, handgun rounds with a long history of stopping gunfights swiftly tend to have higher calculated energies. The 158-grain lead round-nose (LRN) .38 Special—which performed so poorly cops begged for harder-hitting ammo—delivered about 200 foot-pounds of energy (fpe), but the 158-grain lead hollow point +P generated 278 fpe thanks to its higher velocity, and, combined with its expanding projectile, turned the .38 Special into enough of a “man-stopper” to make police unions stop complaining about having to carry .38s.

Sure, “correlation is not causation.” That’s true, but correlations do offer clues. However, there are more tactical and practical concerns in caliber selection than just power.