by Richard Johnson
in Annuals, Guns
0

Installing the magazine catch is very simple but, before you move to the next step, make sure you test it with an empty magazine to ensure you have set the proper depth.

An AR build is likely one of the most fun things you can do without being on the range. From the ground up, you can select all of the parts to make the rifle unique and truly your own. In the first part of this series, I showed you how easy it can be to turn a so-called 80-percent lower into a functioning lower receiver. In this section I’ll demonstrate how to transform that finished lower into a functioning firearm. If you do not want to machine your own lower, you can also purchase a stripped lower through a firearms dealer and build it out using this guide.

You can assemble a lower without the use of a vise, but it will definitely make your life easier. For the AR-15, a block is typically rectangular and matches the external dimensions of a magazine. Tightly secure the block in the vise and slip the lower on top of it using the magazine well.

When you have the button at the proper depth, press it in and remove the lower from the block. Test out a few magazines in the lower to ensure each locks into place and then drops free. With some polymer lowers, you may need to do a small amount of sanding inside the magazine well to ensure all magazines will drop free.

To install the guard, you will need the triggerguard and triggerguard roll pin from the lower parts kit. If you are using an Anderson lower parts kit, these will be in the small black bag. The triggerguard will have a detent pin under spring pressure. Press this in and slip it into the front pin holes in the trigger area. Lay the receiver on a small piece of wood so that the rear “ears” are supported. You will be driving a pin through them, so it is possible to break one if they are not fully supported.

Align the rear part of the triggerguard between the ears. Take the roll pin and lightly tap it into the hole in the top ear. You are not trying to drive it into the receiver—you’re just getting it started. Then, with the proper roll pin punch from the Obsidian punch set, drive the pin through the top ear, triggerguard and bottom ear. Check to ensure the roll pin is flush on both sides of the receiver.

You need to find the bolt catch, bolt catch spring, bolt catch buffer and bolt catch roll pin in the lower parts kit. These parts are found in the small blue bag of the Anderson kit.

Return the lower to the vise block and secure it. Place the buffer on top of the spring and slide them into the hole on the left side of the receiver where the bolt catch pivots. Place the bolt catch in its position, being careful to ensure the buffer and spring are behind the lower portion of the catch. Align the pivot hole in the catch with the two holes in the receiver on either side of the catch.

Slide the smallest punch in the Obsidian set through the left side of the pivot holes. This should go in far enough to hold the catch in place and keep it aligned with the holes. Take the roll pin and drive it in from the right side hole using a roll pin punch. As you tap it into place, the small punch holding the assembly together will fall free, allowing you to properly seat the pin. When the pin is seated, the catch should be under spring pressure and move freely. Some polymer lowers use a proprietary bolt catch system. In these cases, refer to the company’s specific instructions.

TIP: Apply masking take to the surface of the receiver prior to this step. This will help protect the receiver’s finish from damage when you are tapping the bolt catch roll pin home. 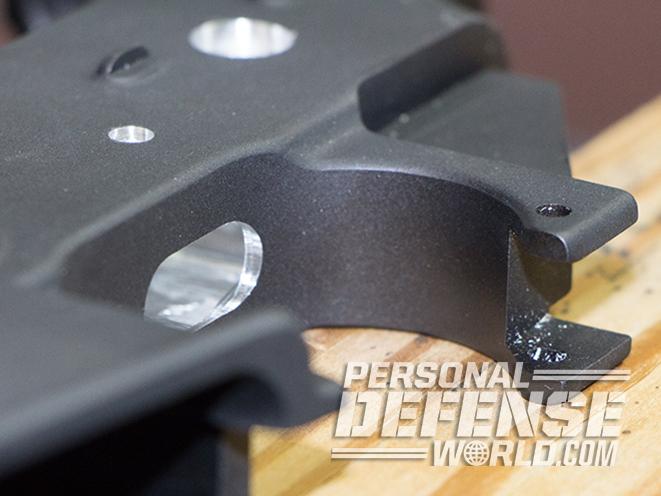 Find all of the parts to the trigger assembly. These are the trigger, hammer, disconnector, trigger pin, hammer pin, disconnector spring, hammer spring and trigger spring. In the Anderson kit, these are all in a clear plastic bag.

The disconnector spring is a small coil spring with one end that is larger than the other. Slip this spring into the rear portion of the trigger with the wider end down against the trigger. There will be friction when seating it, and it should not slip out once it is in place.

Place the trigger assembly in the lower with the trigger properly facing forward. The assembly should be propped up by the legs of the trigger spring. You now need to align the pivot holes of the trigger with the rear fire control pin holes in the receiver. You will need to press down on the trigger, which will place it under spring tension. Slide a punch through the right side of the receiver to maintain alignment of all of the parts.

Start the trigger pin into the hole from the left side. As you slide the pin, you can slide the punch out. You may need to depress the disconnector as the pin slides in and the punch slides out. Once the pin has been pushed all the way through, it should be flush on both sides of the receiver. Make sure the trigger pulls smoothly to the rear and that the disconnector can still be depressed.

Take the hammer pin and begin to move it into the receiver from the opposite side of the punch. Lightly tapping with a rubber mallet can help move the pin into place. Be careful to keep everything aligned as the punch is naturally moved from its position. Once the hammer pin is in place, it should be flush on both sides of the receiver.

Function-test the trigger and hammer. Push the hammer back into a cocked position. It should catch and remain there until the trigger is pulled. As you are testing, make sure you do not allow the hammer to slam forward into the receiver body and damage the gun.

Take the lower off of the block and turn it over. Using tape to prevent marring, place the receiver in the vise upside down and tighten it only to the point where it does not wiggle freely. You do not want to apply very much pressure to the receiver regardless of the material used in its construction.

Once the grip is secure, remove the receiver from the vise and check to ensure the safety is working properly.

When the buffer tube reaches the buffer retainer, press it down and continue to thread the buffer in so that the edge of the tube keeps the retainer compressed. The tip of the retainer should protrude above the tube edge.

You can now add the stock. With most adjustable stocks, there is a lever for changing the length of pull. Many of these stocks allow you to pull the lever down to slide the stock onto the buffer tube. In this build, I used the EX Performance stock from Adaptive Tactical. This stock has a soft recoil pad, a QD sling-attachment point and a protected adjustment lever. By simply pulling down on the tabs above the lever, I was able to easily slip the stock onto the gun.

The lower is now complete. Simply add an assembled upper, complete a round of function tests and head to the range.

This article was originally published in ‘Gun Buyer’s Annual’ 2017. To subscribe, visit outdoorgroupstore.com.