A couple of months back, we brought you the story of a concealed carry permit holder shooting and killing a man who was beating a Florida deputy. Now, for the first time, video has been released which depicts the sequence of events. Watch it above, but be advised that it is graphic.

Let’s recap: on the morning of Nov. 14, Lee County Sheriff’s Deputy Dean Bardes was assisting two Florida Highway Patrol troopers with a crash in Estero on Interstate 75 when he saw a gray Toyota Camry driving by recklessly, nearly hitting him in the process. He got in his vehicle and gave chase.

Eventually, the suspect  — later identified as 53-year-old Edward Strother — stopped his Toyota Camry at an off-ramp on I-75. He then got out of the car and jumped “over the driver’s side door” of Bardes’ vehicle before landing on top of him and beating him, according to the police report.

At that moment, a man named Ashad Russell, 35, happened to be driving by and saw what was happening. He also happened to be in possession of a legally-owned concealed carry handgun. With his gun in hand, he got out of his car, approached Strother and instructed him to stop beating Bardes.

Strother continued attacking the deputy, at which point Russell fired three shots which hit Strother in the shoulder and neck area, killing him.

In the video above, Russell can be seen walking away after shooting Strother and dropping his gun, seemingly in shock.

Last month, the state attorney’s office announced that Russell had been cleared of any wrongdoing in the shooting. Bardes was hospitalized for his injuries and returned to work in December.

At the time of the shooting, Strother reportedly had a warrant out for his arrest after missing a pretrial hearing just one week before as a result of an incident where he attacked a hospital security guard. He had a history of depression, the state attorney’s office said. 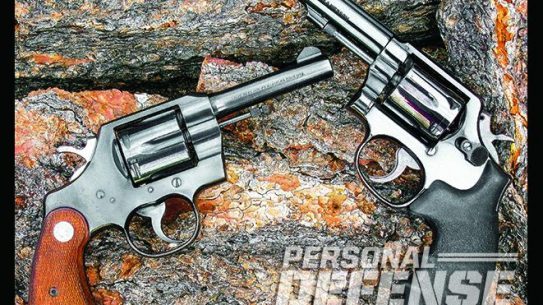 Time to hit the range and salute the Colt Official Police and S&W Model...