Hello, my name is Yamil Sued, and I’m a 1911-aholic. There, I said it. Acceptance is the first step.

Ever since I fired my first 1911 in the early 1980s, I have been fascinated by this pistol’s history and design. I purchased my first 1911 in 1985, right after I graduated from college, when I could afford one. It was a new stainless Colt Series 70 Government Model. I couldn’t afford any custom work back then, so the only customization I did was add a pair of Pachmayr grip panels.

It wasn’t until 1994, when I got hooked on USPSA shooting, that I started to customize 1911s after meeting and learning from America’s top gunsmiths in the Phoenix, Arizona, area. Since then, I have owned several 1911s, most of them production pistols that I had customized to meet my needs, but in the back of my mind I dreamt of something special—a Colt Series 70 Government 1911 with all of the custom touches that I’ve always wanted but could never afford. I always thought this was an unobtainable goal, but that was about to change.

Fast-forward to the spring of 2015. While I was browsing my social media accounts, I noticed a couple of postings from my shooting buddies in Puerto Rico. They posted that my friend Max Rivera from RL Armeria had just purchased several 1911-platform pistols. Max often purchases firearms from the property rooms of state and local police departments and sells them at a considerable discount. I promptly called him to see what hidden gems he had hiding in this shipment.

Max described several older blued and stainless Colt Series 80 Government Models. I asked if he had any Series 70 pistols in his stash. He told me that he had a couple, but they were in fairly rough shape. I thought, “How bad could they be?” Max quickly sent me a couple of photos, and they were indeed rough looking, but I knew I could turn them into the custom 1911s I always dreamt of. I struck a deal with Max, and he promptly sent them to me. Gun stores in Puerto Rico can easily transfer firearms to FFL dealers here in the States.

A few days later, the two pistols arrived. And they were in rough shape. One of them was blued and the other one was mostly nickel-plated. I say “mostly” because half of the nickel was missing. There was rust in bare spots and runs under the nickel. What looked like a police case number was engraved on the dust cover. I sent this pistol to Robar and had the company chemically strip and bead-blast all of the parts that could be salvaged.

The blued pistol had a lot of surface rust, and some parts had been replaced. The slide had the same Series 70 markings on both sides like the nickel-plated 1911, but while the latter’s were roll-marked, the former’s were acid-etched into the metal. After some investigating I learned that Colt had actually done some acid etching in the early 1980s. I wanted the same roll markings on the slide, so after a couple of calls, I found a mint Series 70 slide in Puerto Rico and had it sent my way. This would leave me with an extra slide that I could finish and use for another Colt project in the near future. At this point, I was ready to start building my dream pistols.

My next step was finding a gunsmith for the job. Given that most of the local builders I knew were either too busy or retired, I started to search for another suitable gunsmith to complete my project. Turning again to social media, I researched a number of websites until I hit the jackpot with JT Timmons. JT is a former police officer from South Carolina who now builds and refurbishes 1911s for a living.

I contacted JT just to get a better feel for who he is, and I came away impressed by his knowledge of the 1911 platform and his professionalism. I told JT what I wanted in a custom 1911 and the sad condition of the two Colts I got from Puerto Rico. He seemed just as excited as I was to get to this project. We figured out what custom touches and parts I wanted, and JT asked me not to send the parts until he was ready to start working on them in late September. In the meantime, I busied myself collecting the parts I wanted.

JT took each pistol down, sanded and polished every surface as needed and fit each new component by hand. He added forward slide serrations and lowered and flared each ejection port. He added 20-lpi checkering to the frontstraps of both frames. He also gave each pistol a trigger and action job to ensure accuracy and smooth cycling.

One important touch for a custom 1911 is the finish. JT had the same concerns, so we agreed on a durable but attractive finish for these guns. We zeroed in on Richter Precision in East Petersburg, Pennsylvania, for its PVD coatings. We had the company apply matte black PVD finishes to the slides and all of the small parts. One of the frames was coated in dark grey PVD while the other was given an attractive matte stainless finish.

After a few weeks, the pistols were returned. I was shocked. After sending JT a pile of rusted and pitted Colt parts and a bunch of new components, he had returned two of the most beautiful custom 1911 pistols I have ever seen. Now the only thing left was to take them to the range to punch holes in paper. 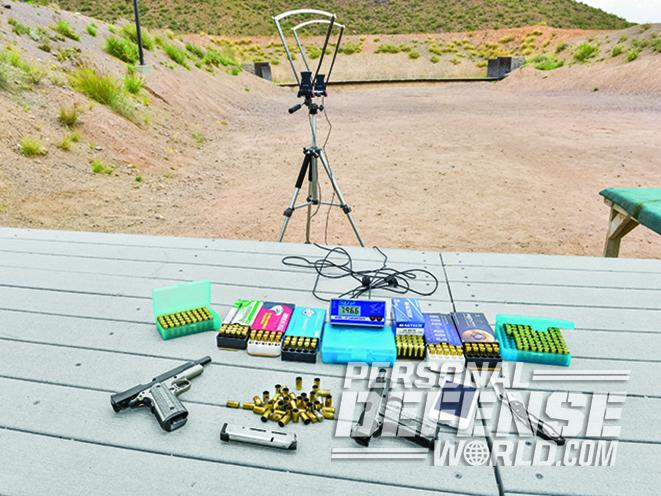 Spring in the Arizona desert is one of the most beautiful times of the year—the perfect time to hit the range and have some shooting fun. I invited my partner in crime, Scott, to spend a morning with me at the range and help me celebrate my birthday with the 1911s and a ton of ammunition. I brought along several factory loads from ASYM, Black Hills, CorBon, Federal Premium, PMC, Magtech and Remington as well as one of my competition handloads, which consists of Rainier 230-grain TCJ bullets loaded over Vihtavuori powder.

Our first task was chronographing each load through both pistols. Then came the accuracy evaluation. We fired five-shot groups off-hand at 10 yards with each load and averaged the results between the pistols. Remember, these aren’t the best groups, but the averages. Still, the pistols performed well. 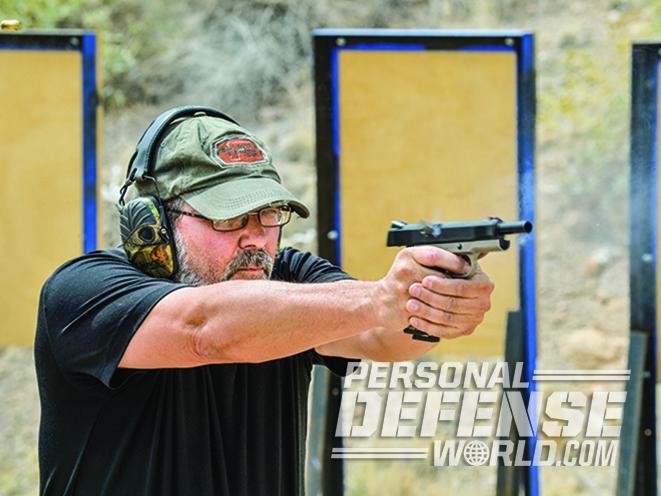 We usually follow the accuracy test with a reliability test, but because both Scott and I are USPSA shooters, we set up a classic “El Presidente” drill by placing three USPSA targets 6 feet apart at a distance of 10 yards. In case you’ve never heard of this drill, it starts with the shooter facing up-range. At the signal, the shooter turns around, draws and engages each target with two rounds, reloads and hits each target again with two more rounds. Scott and I ran three El Presidente drills with each of the guns, and they performed flawlessly. They fed, fired, extracted and ejected every round perfectly. I can’t wait to take these guns to a match. The only problem is figuring out which one to use, as they’re both equally impressive.

After 30 years of shooting 1911s, I finally have the custom Colt Series 70 Government Model 1911 pistols I’ve always dreamed of. They are both accurate and reliable. One thing to be learned from this project is to never judge a pistol by its looks or condition; one rusty and pitted lump of coal can be polished into a gem that becomes the centerpiece of your gun safe.

This article was originally published in ‘Ballistic’ Spring 2017. To subscribe, visit http://outdoorgroupstore.com