by Abner Miranda
in Home & Self-Defense
0

Dave Spaulding spent over 36 years in law enforcement, with many of those years as an instructor. Here he demonstrates his "Check 360," where you turn completely around after a drill to scan for threats.

Upon returning from the Advanced Combative Pistol class, I dropped into bed that Sunday night with a mental exhaustion that was only partially due to the 6.5-hour drive back home from Dayton, Ohio. As I crawled wearily under the sheets, my wife asked, “Why did you drive so far to go to this class?”

I stared at the ceiling fan for a bit, took a deep breath and said, “Because last year at this time, I was photographing Ken Hackathorn’s classes when he said that he was pretty much done with the training circuit.”

The realization that I’d squandered many years’ worth of opportunities where I could’ve come out to train with a giant in the industry was beyond words. I was there for Ken’s last two classes but came out only as a photographer/videographer. I made the choice to leave my weapons in the truck because I needed to focus on capturing media. I deeply regret that choice.

With that salient event in the forefront of my mind, I told my wife that I didn’t want another instructor, Dave Spaulding, to retire without gaining as much knowledge as I could from him.

Dave is a guy who’s steeped in pistolcraft at a level that far exceeds what one normally finds in today’s instructors. He’s unabashed about telling you that he focuses almost all of his time to pistolcraft. Lately, I’ve spent considerable time working on his drills, and while he makes them look easy, don’t be fooled—they’re anything but that. To call the man “brilliant” is correct. But based on what I’ve gleaned from him the few times we’ve communicated, I can say that Dave Spaulding would prefer to be referred to as “focused.”

As mentioned, I recently attended Dave Spaulding’s Advanced Combative Pistol (ACP) course. Seeing as how I’d been working on Dave’s drills, I had a fair idea of what I was getting myself into. I knew that “humble pie” was on the menu for this two-day, 600-round class.

I made the switch to a pistol-centric training regimen a while back and haven’t regretted it. Out of the almost 40 classes I’ve attended over the years, 25 have been primarily focused on carbines and only five have been pistol-centric. The others have been a combination of the two. Why? Probably because everyone knows that pistol training is difficult. To focus your business model around only pistol work is a gutsy move, and Dave Spaulding has pulled it off well. I personally believe that his business model is more about sharing his knowledge than filling class slots. His temperament also speaks to this.

I’ve had a lot of training and have endured some serious jerks in my time. I’ve had instructors give “instruction” that comes across like a kick in the face because they’re terrible at communicating. Dave Spaulding has the panache to be able to tell you bad news and have it come across in a palatable manner because he’s not being an ass about it. Case in point: ACP is a highly technical and very physically demanding course. At the time of the class, I was nursing a knee injury and was slow on my traverse times on Dave’s “15 to the Third” drill. My shot placement was good, but my movement was lacking, and Dave was very matter-of-fact about telling me so.

This is a course that pits you against your own competence. I train a lot on my home range and am a fairly competent shooter. But even with that under my belt, I really felt overwhelmed at times with this course. Part of this is because ACP demands precision out of every shooter, and “precision” and “pistol” are two words that just don’t fit well together. Any faults you have in technique will be exposed, and the ACP course showed me that my trigger pull was truly lacking in consistency.

Dave teaches that the sympathetic contraction of the fingers is led by the index finger. You pull the trigger and the other three fingers (the thumb and index are actually considered to be one finger) tend to want to come along for the ride. The ACP course will accentuate that fault because a lot of your time is spent shooting at very small targets. The two paper targets Dave used in this class were a 3-by-5-inch card and a larger 6-by-10-inch one that pictorially represents the heart and the surrounding bones and vasculature.

Dave started the class with a concise PowerPoint that set us up with a lot of knowledge to build on. His assistant instructor for this course was Jonathan Willis, an EMT and firearms instructor representative of the kinds of professionals I’ve had the privilege to train with over the years. The guy is no slouch, and he, just like Dave, ran all of the drills with us. Both men did an exemplary job of giving concise instruction and praise where needed. This was welcome because ACP is run on a tight timeline, and you will often feel out of balance as you struggle to make the times around which the drills are set up.

Which reminds me: Everything you do in the ACP course is under a strict time constraint. You have just enough time to get it done. Why? Because Dave has honed his drills down to the barest of margins to make you work for it. The only other way to get you to really work at precision is to shoot at you, and that wears you out. No I don’t mean live rounds. Force-on-force training is excellent, but you can’t get a lot of repetitions in because the pain wipes you out and pushes you out of the mental state that you have to be in to learn.

Dave got us rolling on skill drills right away. He stresses movement and constantly checking your surroundings. His trademark “Check 360” is one of the maneuvers that’s covered under the subheading of “movement with purpose.” Check 360 is a maneuver where the student completely turns around after completing the drill at hand. In other words, as soon as you’ve dropped the bad guy and are reasonably certain that he’s not a pressing threat, you step slightly towards him and efficiently turn around and face the area that was previously at your back. This is done while simultaneously indexing the pistol in a slightly downwards position and tucking it tightly against your rib cage. At the same time, you bring up your support hand in a defensive posture as if you fully expect someone to be coming up behind you in an attack.

This maneuver is controversial to most instructors to such a degree that I’ve never been taught it either as a law enforcement officer or in all my years of training. Seeing as how this was an advanced class, everyone performed the Check 360 with decent efficiency with little follow-up instruction necessary. There were a few instances where Dave had to direct guys to perform the technique with focus and not turn it into a “range dance,” where students rapidly whip their heads back and forth, which is basically worthless. In various instances, Dave would hold various objects in his hands to see if any of us where spotting them. Nope! Truly checking your surroundings is a difficult thing to do, and it takes true focus at the end of a very chaotic event.

Dave heavily stresses that you’re not just looking for movement, faces, hands, gestures or even weapons. You need to look at all of it before you act. For example, if you’ve just shot someone in defense of your life, you have to know that someone else heard the shot and will respond with a weapon. It could be a good guy or a bad one. You turn around, Check 360, and suddenly another guy is coming at you, you see a pistol in his hand, not particularly pointed at you, but he’s moving towards you. Do you just shoot him, too? Or do you take a moment to look—and yikes! You notice that he’s wearing a uniform and a badge. Assuming that you will see everything, and will be seen by the good guys as a “good guy,” is a huge assumption that can end in disaster. Dave teaches you to be a thinker first and to move with a purpose. 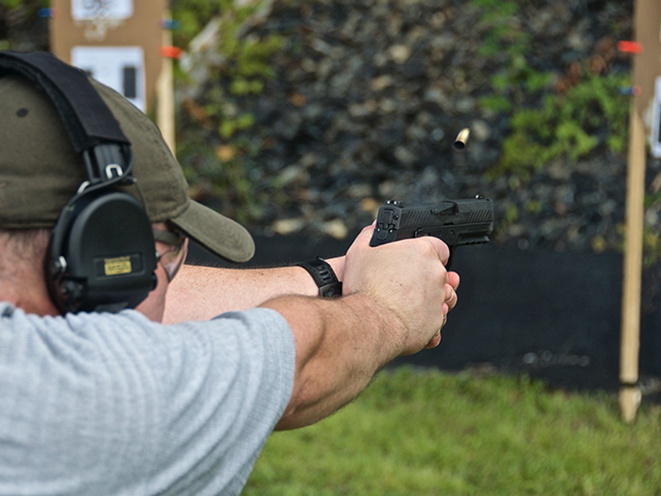 The ACP course is definitely a must-do class that you can take several times and still learn something new. Dave has the ability to give you the same information from several different angles and make you keep coming back for more.

I would highly urge you to check out Dave Spaulding’s website as well as his YouTube channel. With both you will find myriad information that will guide you in your efforts to first understand what you don’t know and then get better at what you do.