A would-be home invader fled the scene when he came face-to-face with a shotgun-wielding Florida Mom willing to do anything to protect her family, and the whole thing was captured on video which has just been released to the public.

ABC affiliate WPLG reports that, earlier this month, the suspect brazenly drove up to a home in Miami Gardens during the day, exited his vehicle and tried to break in through the front door.

Inside the home at the time were a mother, her 10-year-old daughter and three-year-old son.

“All of the sudden I hear some banging noise. I thought it was my dreams or something,” she later said.

When the mother realized what was happening, she ran and grabbed her home defense shotgun.

Meanwhile, her children were “screaming and crying hysterically, because they were afraid of anything happening,” she said.

Eventually, the suspect kicked the door in and entered the home, only to find the business end of a shotgun pointing at him. Once he saw that, he bolted.

“He was running for his life and kept looking back, making sure I wasn’t going to shoot him in the back,” the woman said.

The suspect escaped in a stolen Mercedes-Benz which was later recovered in Miami. He remains at large.

“I will do anything to protect my family,” the shotgun-wielding mother said. 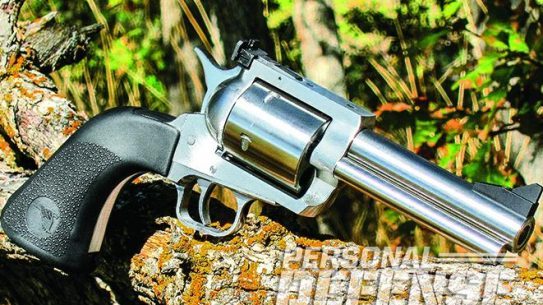 Not the biggest BFR, but still one of the finest—check out Magnum Research's new...